Festivals | From MCR to

Yeah, Glastonbury is great, but what about boarding a plane to dance all weekend at blissful locations across Europe?

Kiss goodbye to flooded tents and wellies, as both festivals AND travel are finally back this year.

Across Europe there are a plethora of places to drink warm cans and douse yourself in glitter, all while enjoying some incredible music! From sandy Spanish beaches to the idyllic green fields of Amsterdam – we’ve rounded up some of the best festivals you can only get to via the skies. 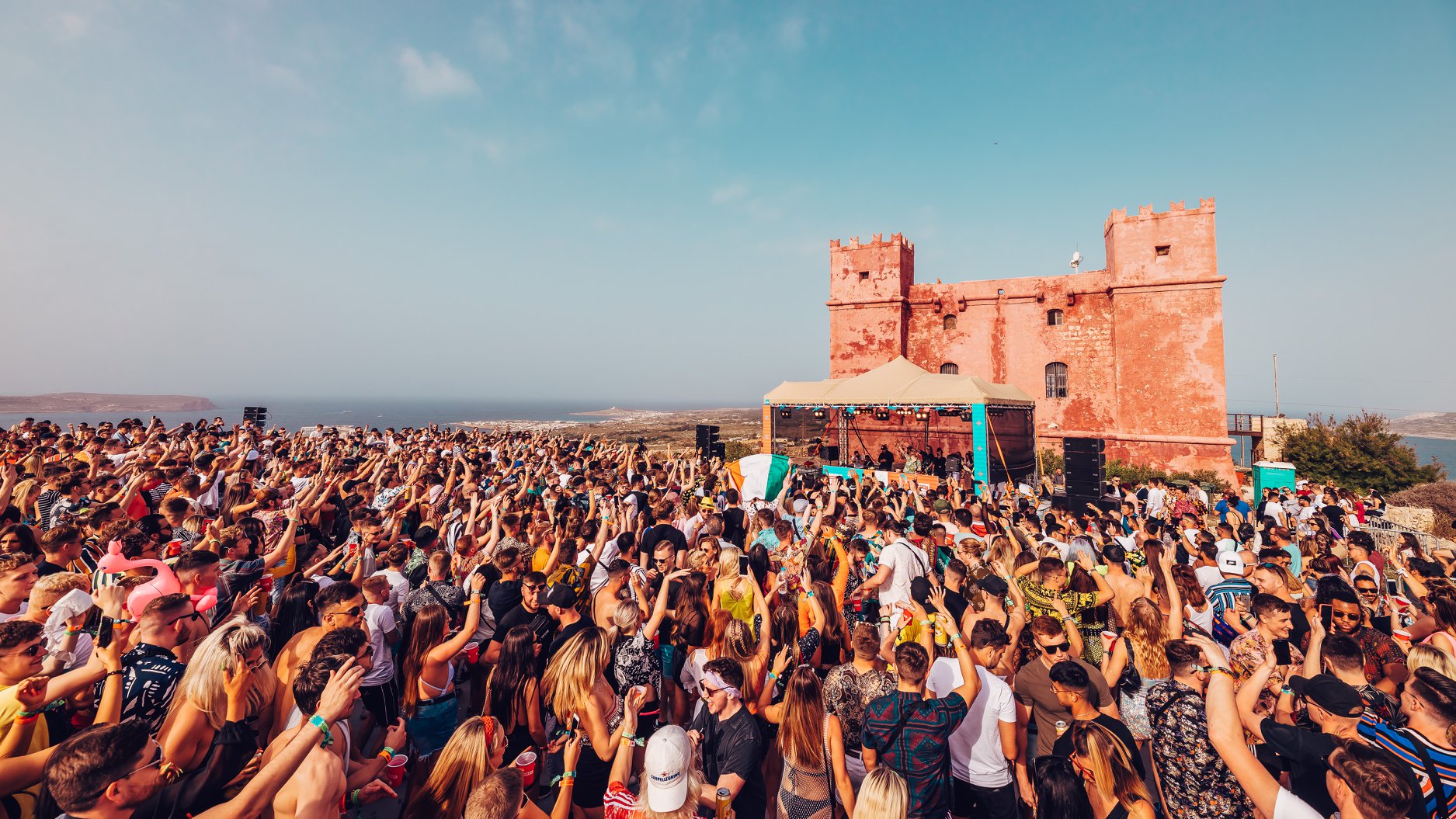 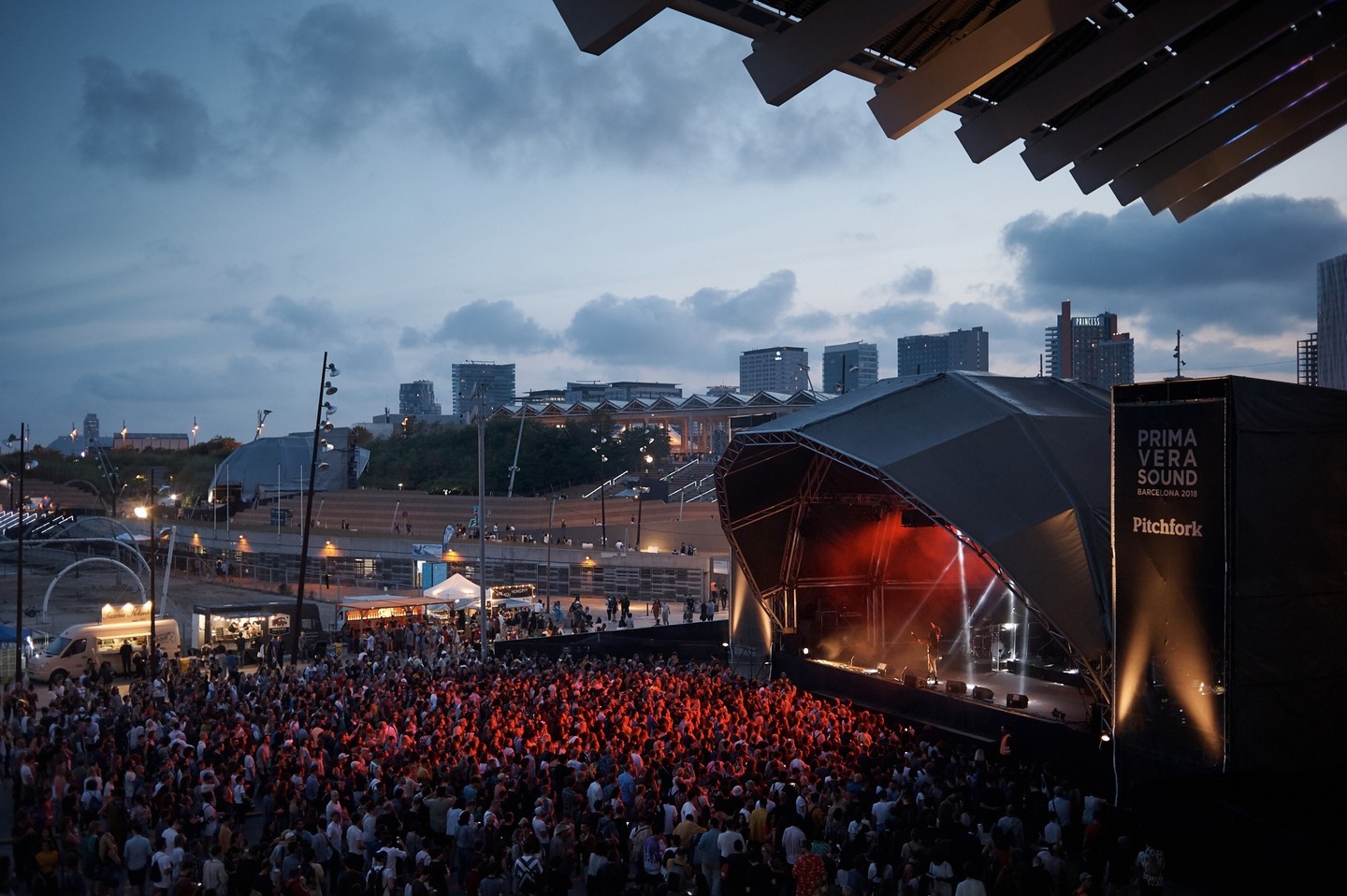 Primavera (Barcelona)
Thursday 2nd June – Sunday 12th June
Barcelona’s infamous celebration of music is back this year, for a whole 10 days of big tunes, boozing, sunshine and good times. The festival will see acts such as Tame Impala, The Strokes, Gorillaz, Disclosure, Jamie XX, Dua Lipa and Lorde plus tonnes more take to its stage underneath the Spanish sun at arguably one of the best festivals in the world!

The city truly comes alive over the dates, too, with art exhibitions, events and performances taking place, and, of course, all the tapas, paella and sangria you can get your hands on.

Primavera 2022 is currently sold out, but you can join the waiting list via the festival’s website below. 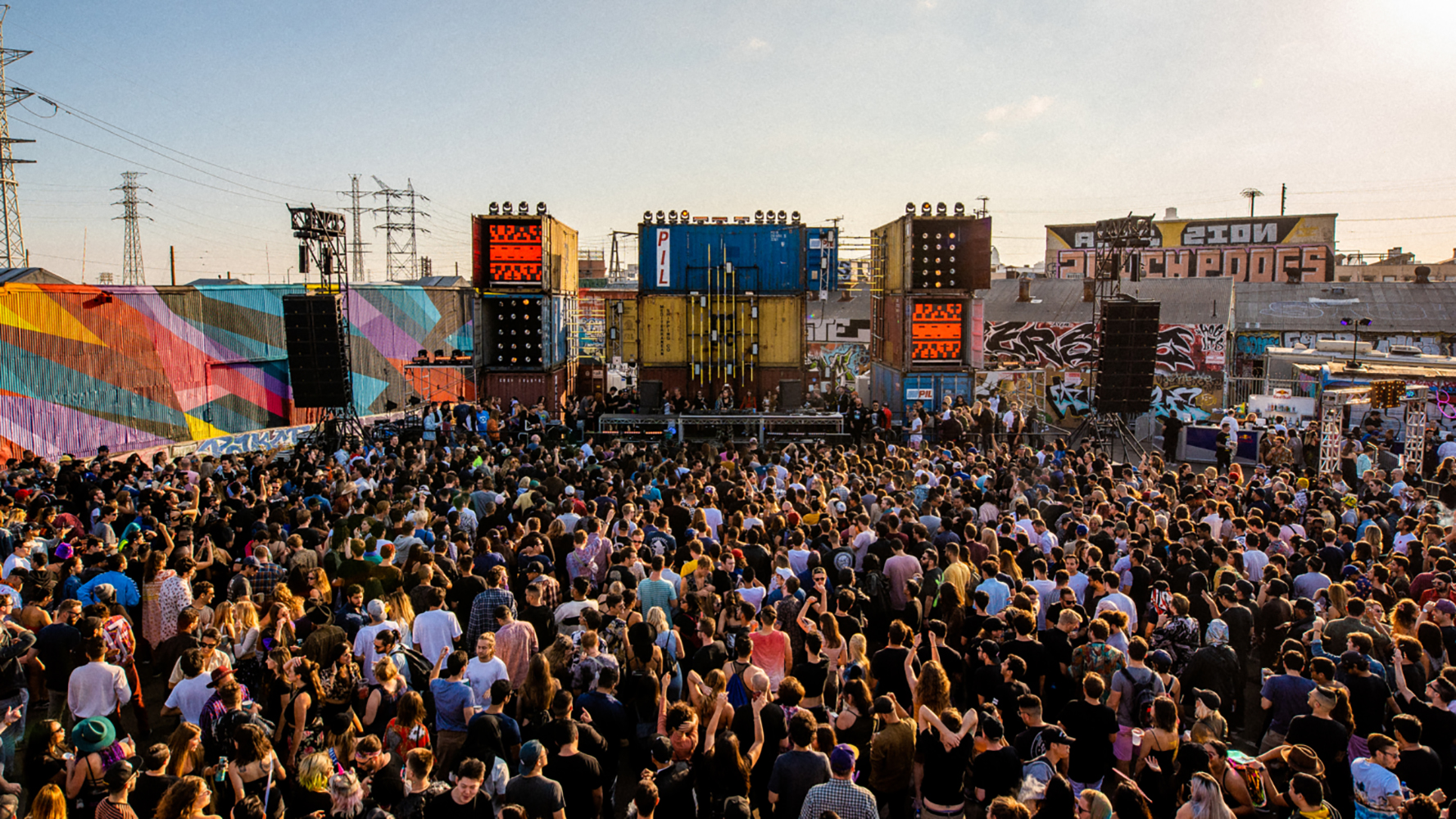 Fusing art, cutting-edge technology, and exceptionally curated house and techno music, the festival known for its daytime moments is ready to grow beyond its origin. The line-up is full of pioneers including; Andy C, Camelphat, Jamie Jones and Sub Focus. 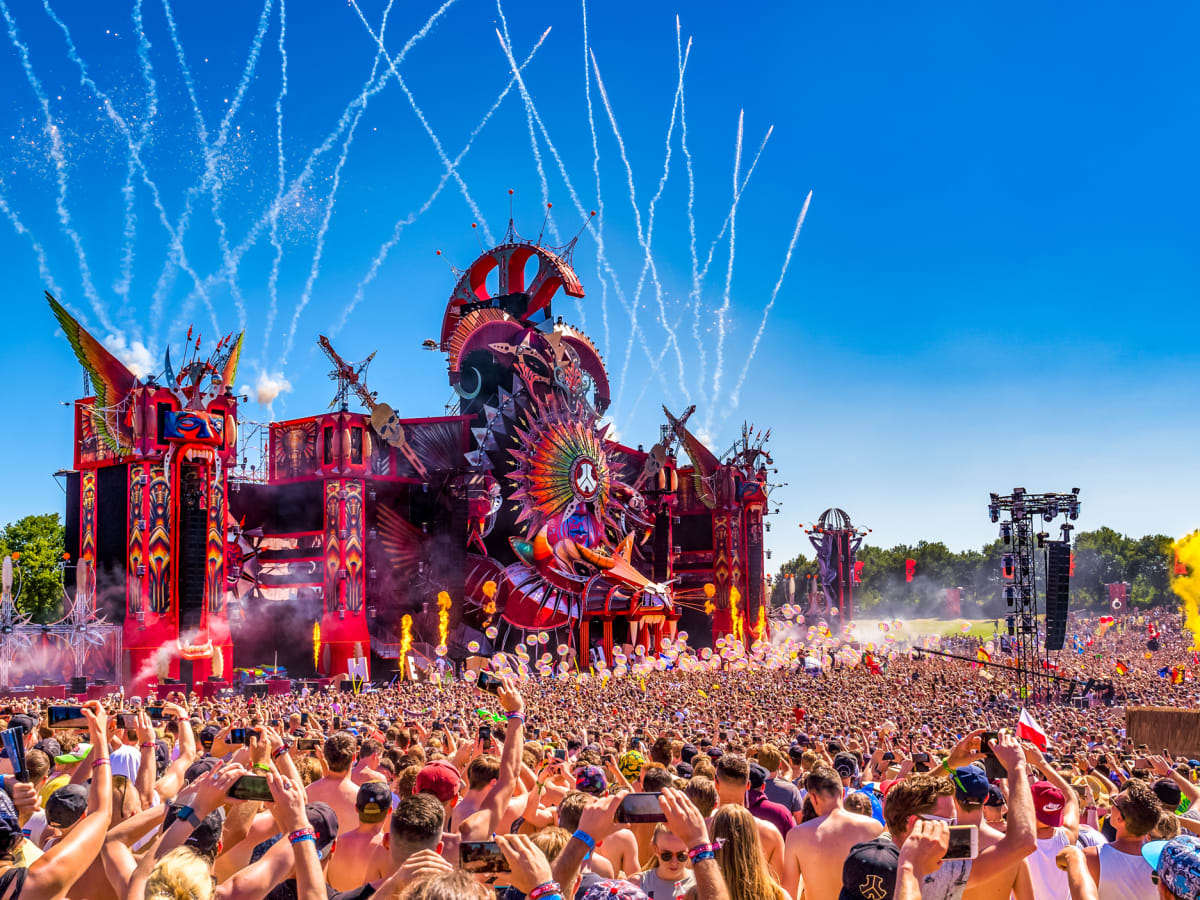 Defqon.1 (Netherlands)
Thursday 23rd – Sunday 26th June
The annual hardcore festival is back once again in 2022, held in Almere in The Netherlands. They welcome around 70,000 visitors every year and is actually the biggest hardstyle music festival in the entire world.

This lot don’t mean much to me, but if you’re into this kind of music – they should get you excited. Headlining this year is Warface, Sub Zero Project, Headhunterz, Angerfist, Zatox, and Wildstylez. Plus a massive long list of other performers across the 16 stages and 4 days. 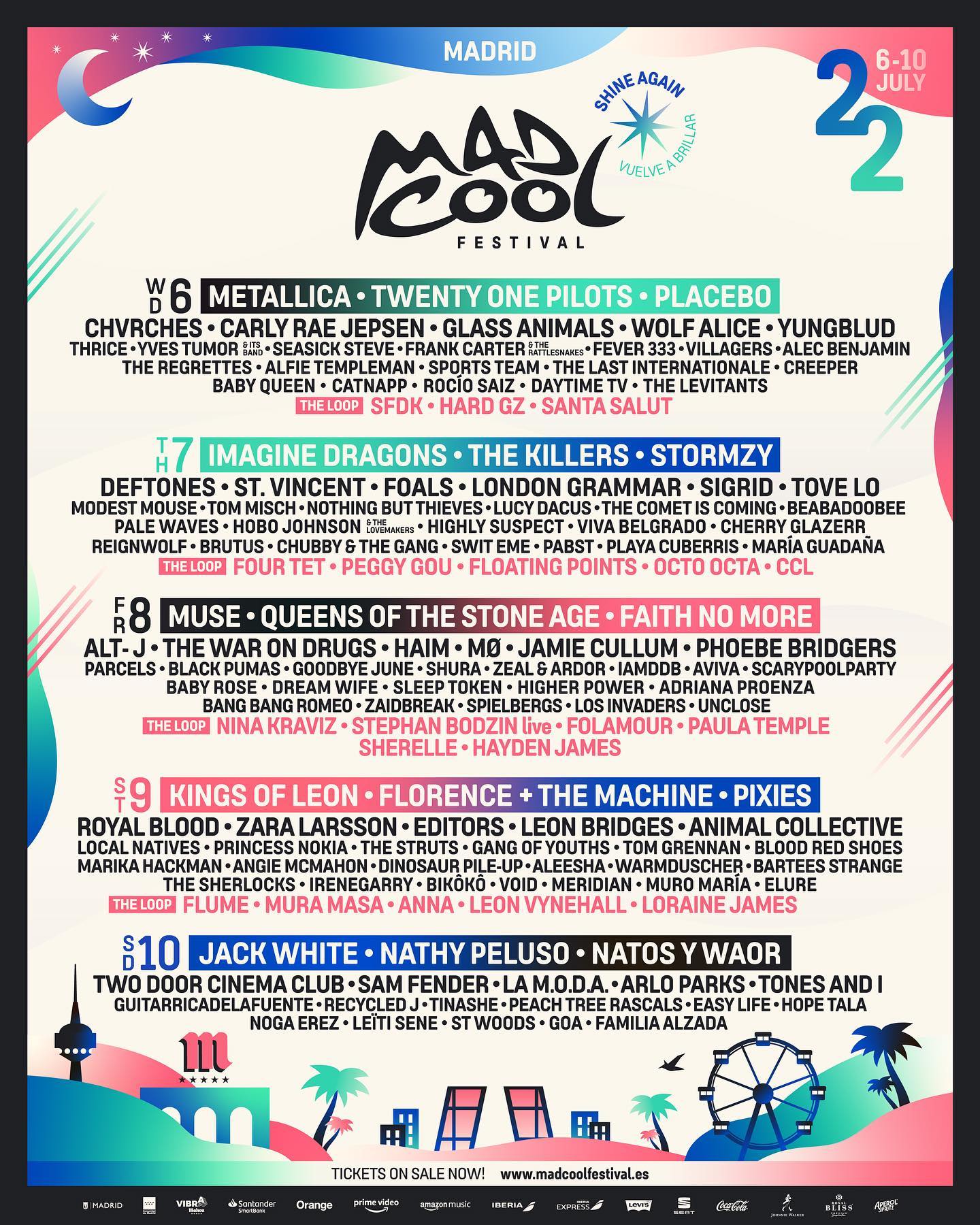 The festival takes place in the Spanish capital, Madrid, and for 2022 it has expanded to a five-day affair, pushing one of the biggest line-ups in the Europe festival calendar. It will also be celebrating its belated 5th birthday after being delayed for 2 years because of COVID, so aside from the music, you can expect some huge parties and performances that will bring it unforgettably into its quinquennial year. 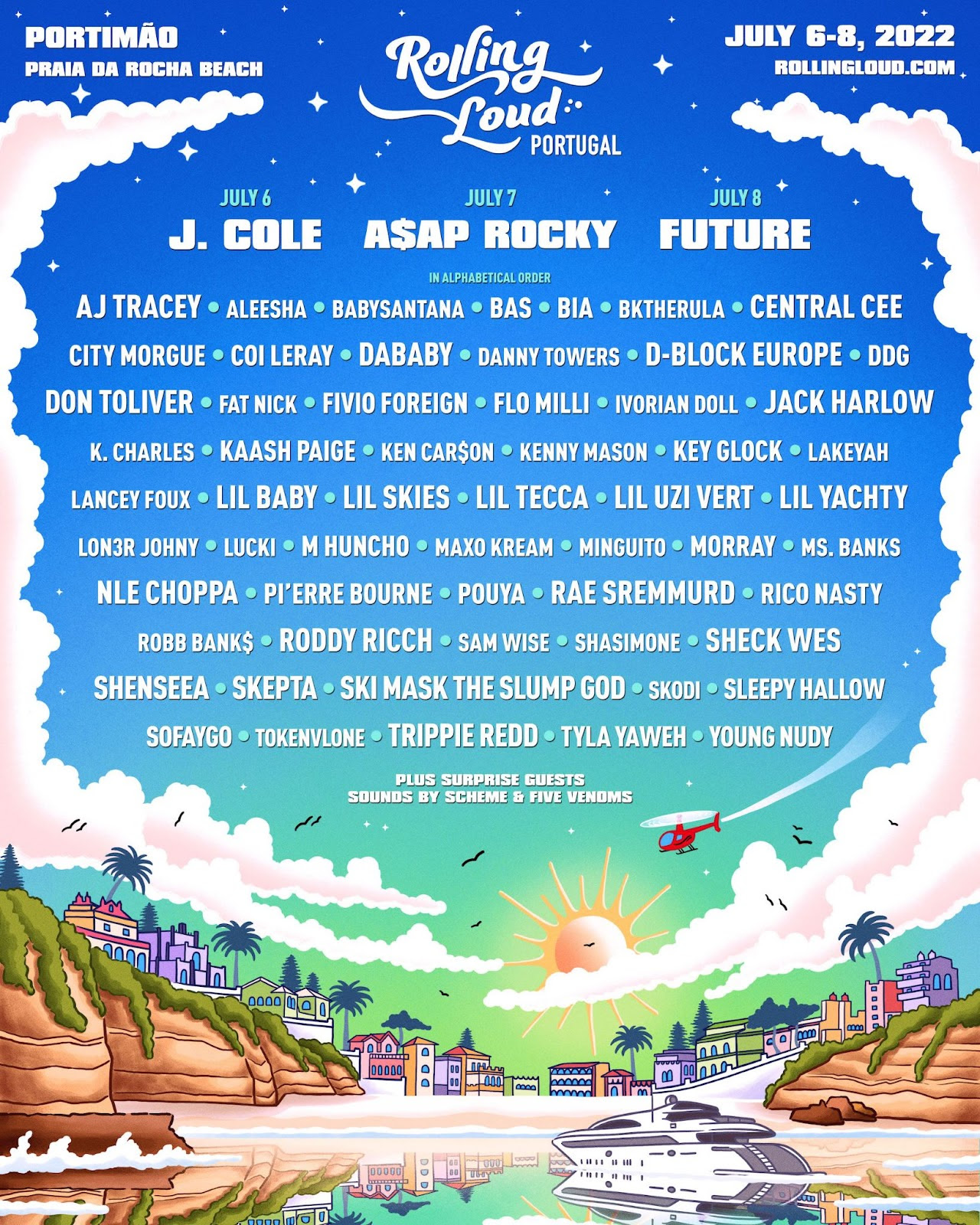 Rolling Loud (Portugal)
Wednesday 6th – Friday 8th July
The ultimate destination for hip-hop and beach lovers alike, Rolling Loud has become a leading cultural voice and the ultimate destination for momentous performances for artists stepping up to the big leagues. A must for all fans looking to catch their favourite acts, and with more names and surprises still to be announced for 2022, Europe is finally welcomed into the Rolling Loud revolution.

You’ll be able to catch J Cole, A$AP Rocky and Future, as well as other leading names in the game such as AJ Tracey, Don Toliver and Central Cee, all on the gorgeous beaches of Praia Da Rocha, Portimão, The Algarve in Portugal. 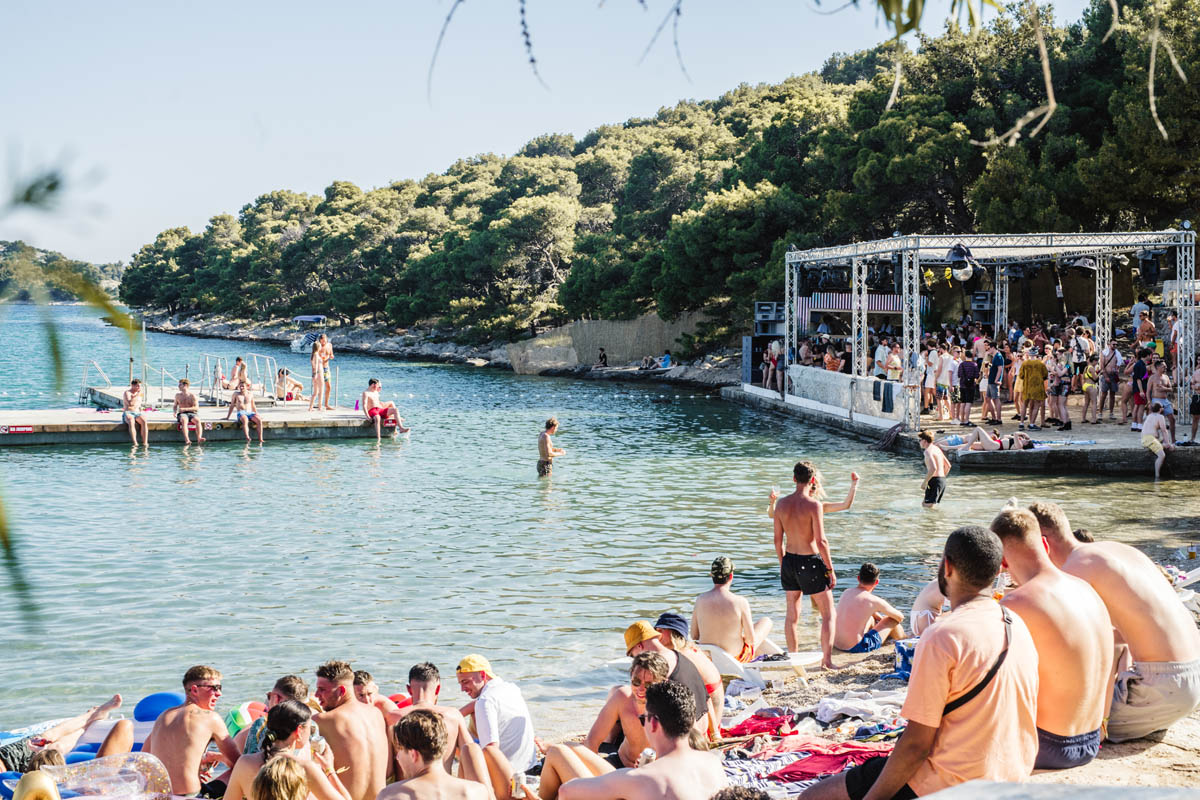 Love International (Croatia)
Wednesday 13th July – Wednesday 20th July
Another Croatian party that’s not to be missed, Love International pulls together some of the world’s best DJs, amongst crowds of freaky dancers right on the stunning Dalmatian coastline.

Like Dimensions, the festival itself takes place in ‘The Garden’, which sits directly opposite the small town of Tisno, with a bay in between the two acting as the perfect spot for plenty of riotous boat parties.

The line-up this year consists of Palms Trax, Crazy P Soundsystem, Horse Meat Disco, Gerd Janson, Raw Silk, Midland and Manchester’s own Homoelectric who will be hosting a boat party featuring some of the finest DJs from out beloved city and beyond! 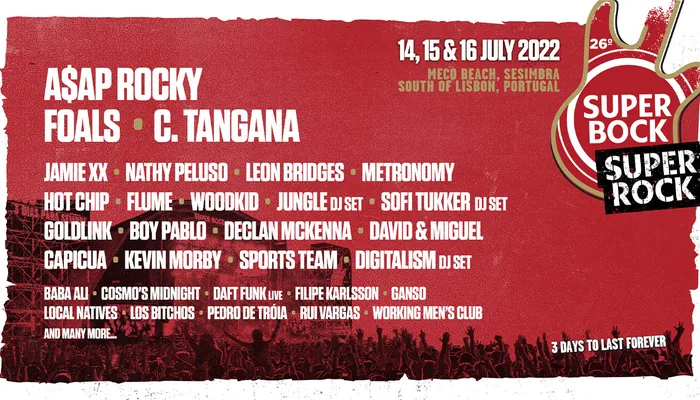 Super Bock Super Rock (Portugal)
Thursday 14th – Saturday 16th July
First held over 25 years ago, Super Bock Super Rock is the most establish, esteemed and popular festival in Portugal, and they manage to boast some seriously impressive headliners every single year. Not entirely ‘rock’ only, as the name would suggest, you should also expect stars of pop, electronic, music, hip-hop and more. 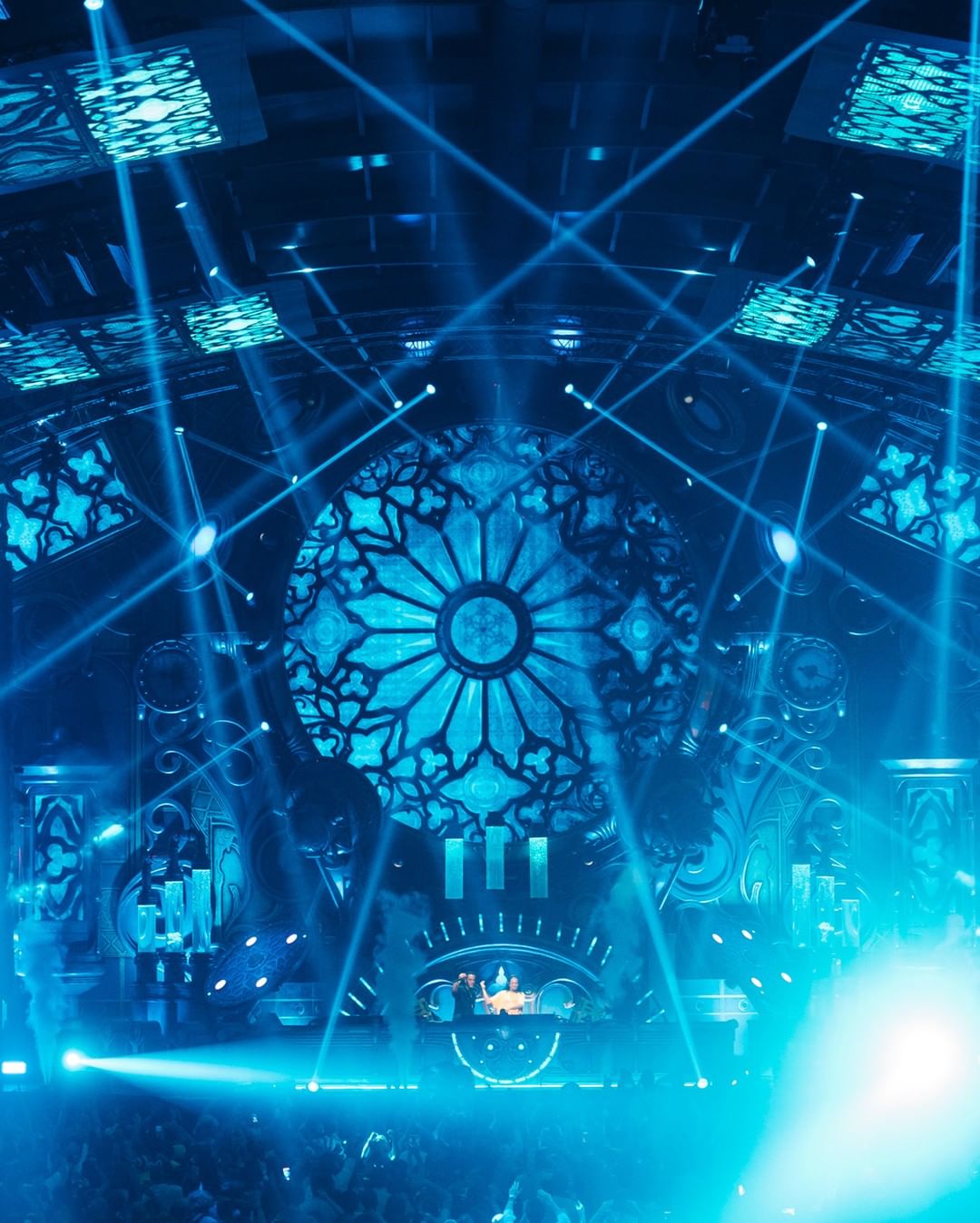 Tomorrowland (Boom, Belgium)
Various dates from Monday 15th July – Monday 1st August
Taking place across three weekends this year, Tomorrowland is its own village welcoming worldwide movers and groovers to a location that’s very difficult to leave. It’s the world’s biggest dance festival and you can expect a big long list of superstar DJs from across the continent.

This year Tomorrowland will see the like of Erik Prydz, Afrojak, Joris Voorn, ADIN and Virutal Riot play across three weekends as it properly celebrates to the return of real face-to-face raving. You can also book to stay in its Dreamville, which is home to tens of thousands villagers during their stay at Tomorrowland. It’s a welcoming village to eat, sleep, live and enjoy the experience, where you’ll meet people from all walks of life and form intimate, after hours international friendships.

You can grab a limited amount of Global Journey Travel Packages below. 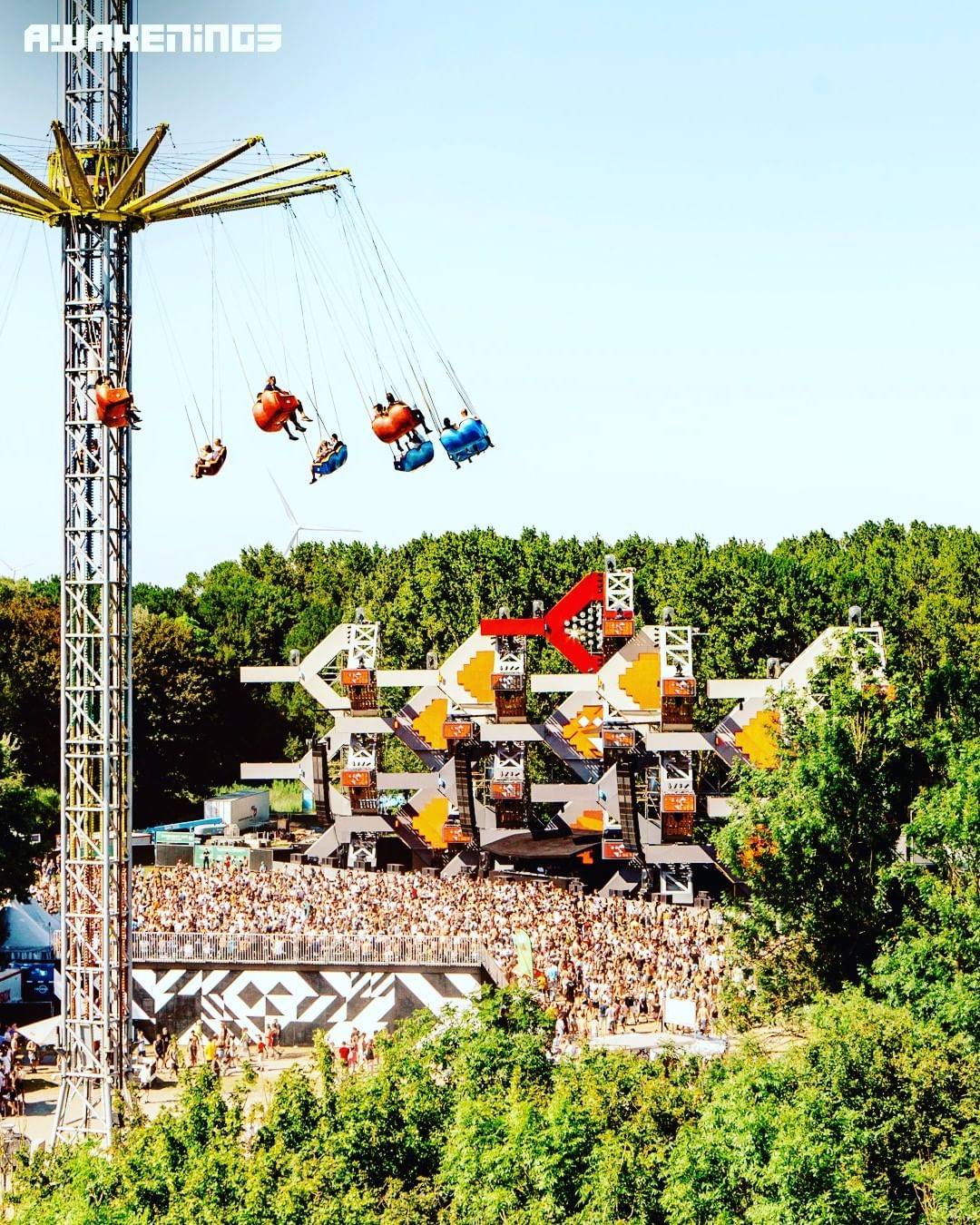 Awakenings (Hilvarenbeek)
Friday 29th July – Sunday 31st July
After two years without it, Awakenings festival is back! This year, the festival will celebrate its 25th anniversary with possibly the biggest and best festival it has ever hosted with the addition of an extra day, as well as an official campsite.

The brand new location in Hilvarenbeek will make it the only three-day techno festival in the Netherlands and with artists such as Joris Voorn, Patrick Topping, Eats Everything and Seth Troxler fitting the bill, you know it’s going to be a good’un. 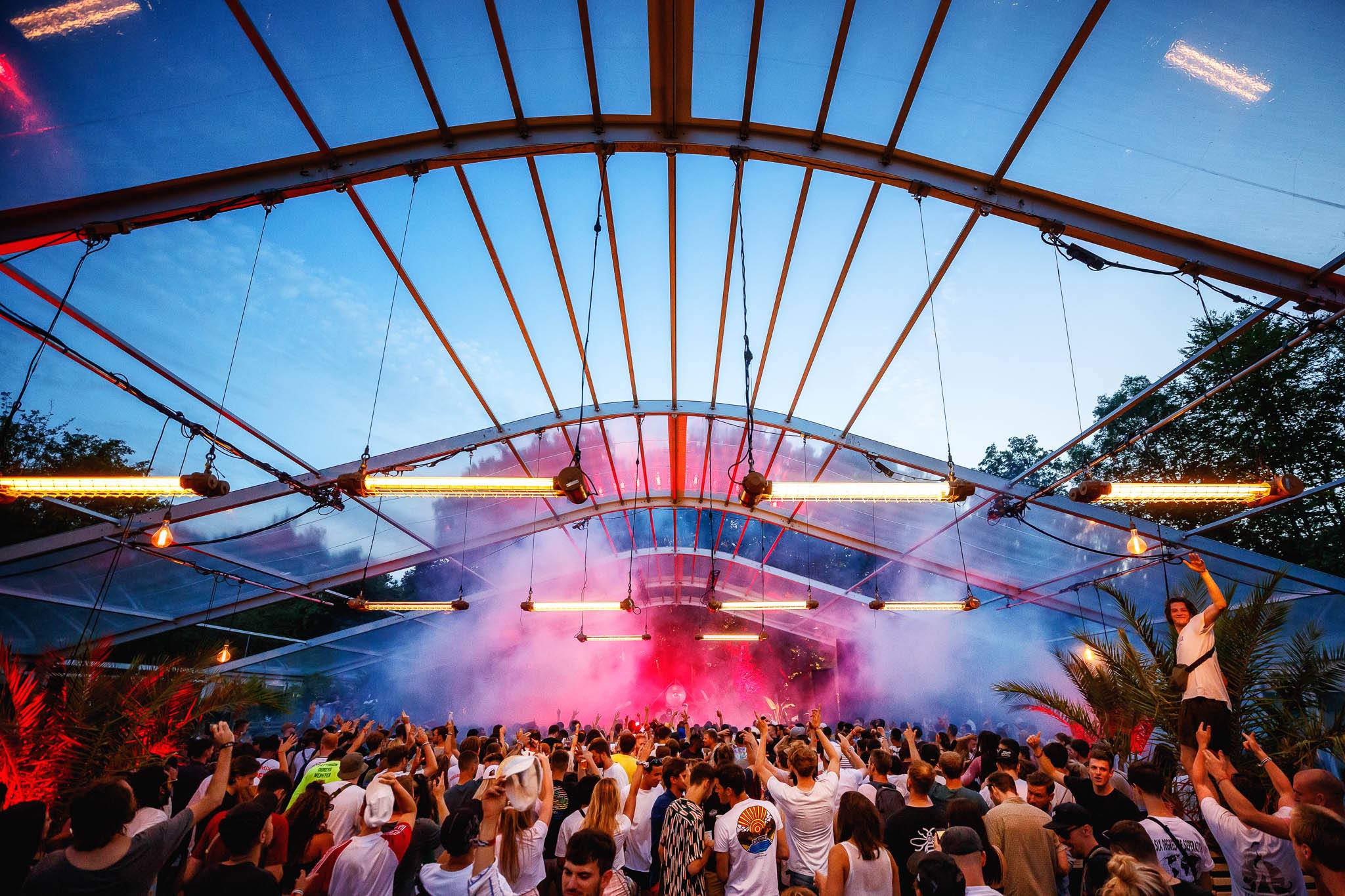 Dekmantel Festival (Amsterdam)
Wednesday 3rd – Sunday 7th August
The wait has been LONG, but the return of Dekmantel has never felt so good. Amsterdam’s biggest electronic music festival is held in the hidden woodland of Amsterdamse Bos, one of the most stunning and natural surroundings the city has to offer.

This year, the festival hasn’t held back with its line up as the likes of Eris Drew, Helena Hauff, Darwin, Jayda G, DJ EZ, Acemona and Gaussian Curve will all play its paradisiacal location, that’s as much about music as it is about wellbeing in the depths of Amsterdam’s city park oasis. Weekend tickets have sold out, but you can grab the last remaining Wednesday and Thursday day tickets via the link below! 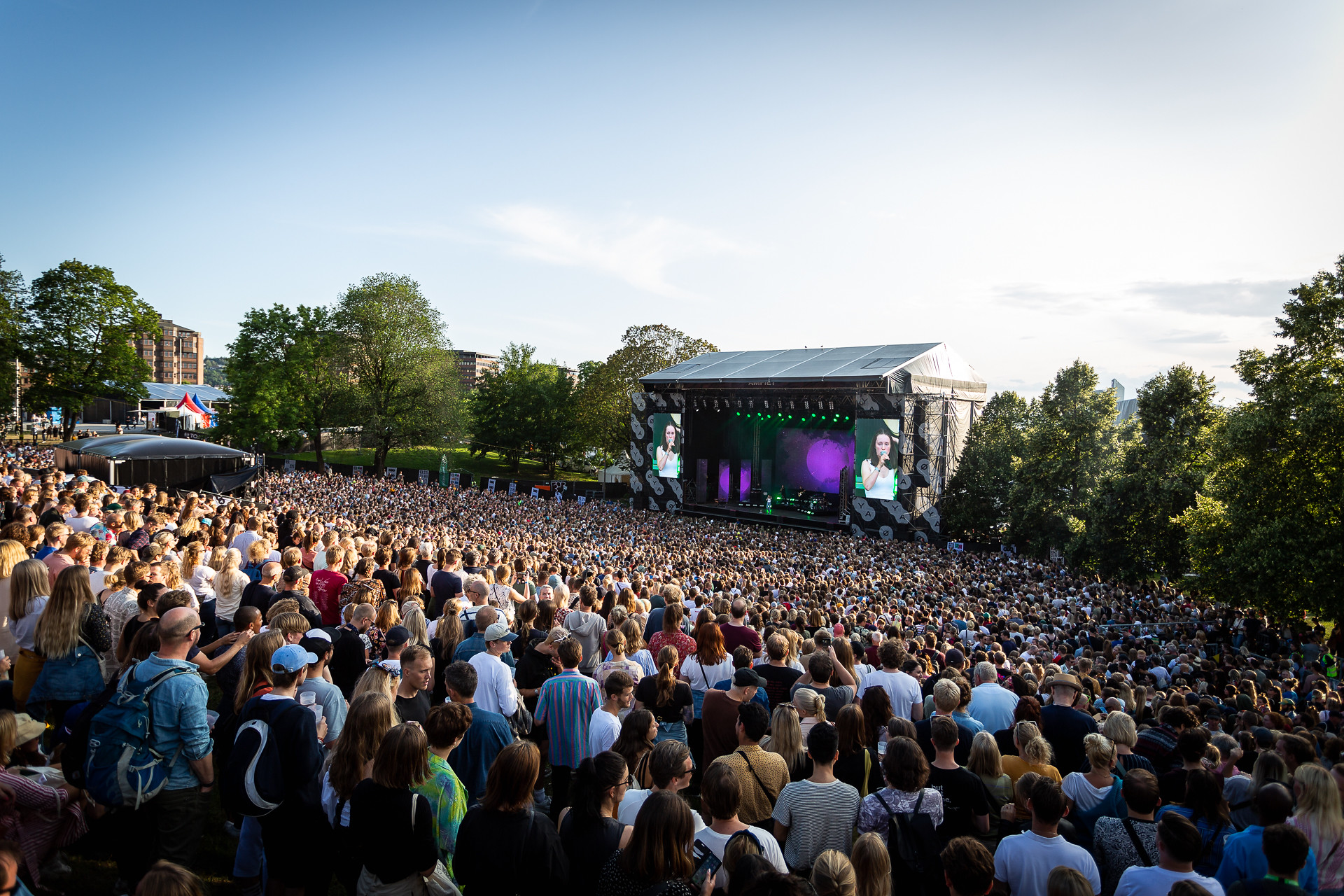 Øyafestivalen (Oslo)
Tuesday 9th August – Saturday 13th August
Taking place at Tøyen Park in Oslo, Norway, Øya Festival has grown massively since it began back in 1999. Previously, the festival has welcomed bands and artists of legendary status including; Sonic Youth, Iggy and The Stooges and Morrisey, and this year is no different.

Headlined by Florence and The Machine, Øya will also welcome the likes of AURORA, Michael Kiwanuka, First Aid Kit, AJ Tracey, Fontaines DC and Arif for three days of uncompromising, good-quality music. This festival is dedicated to music lovers and there’s absolutely no doubting that you’ll leave with a new favourite band. 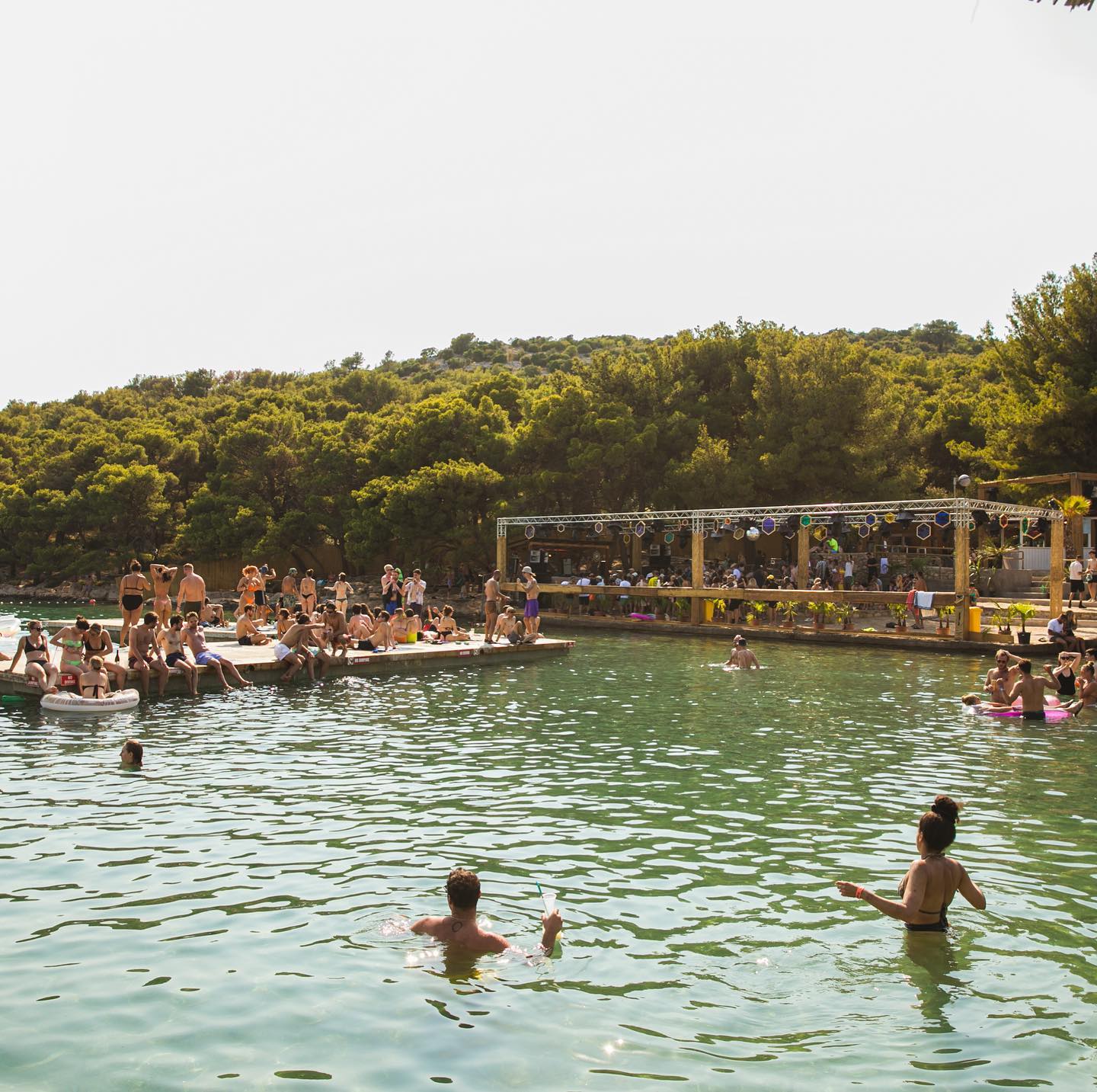 Taking place at the infamous, serene shores of the Garden Resort is Tisno, Dimensions will be celebrating its 10th anniversary in spellbinding style, probably with no sleep and an excessive amount of dancing, all amongst back to back exclusives, label parties, UKG celebrations, Detroit specials, debut sets and much more.

The Manchester Guitar Festival returns to the city in May
Festivals

Manchester’s Summer of Love Festival is BACK… in a Disused Printing Factory!
Festivals

Your Dream Job? Get Paid £7,500 to Attend Festivals Every Weekend this Summer!