Manchester is a city with a rich musical history and an ability to attract bands and artists from a vast array of genres to its many venues. However, it is perhaps fair to say that in terms of the metal and hardcore it has not always offered as impressive a range of offerings as other cities, such as – dare we say it – Leeds.

However, SummerJam is just one of the events that should go some way to changing all that. The rock weekender made its debut at Moho Live on July 21st and saw some of the UK’s hottest and heaviest acts taking to the stage, including Bury Tomorrow, Brutality Will Prevail, Heart In Hand and Azriel. It was arguably the first time that such a selection of quality British bands with a heavier focus to their sound have been gathered in the city all at once, so naturally I thought it only right to head along on the Saturday.

The action in the northern quarter got underway on Saturday afternoon, but was preceded by a launch party at Zoo the previous evening. Kicking off the day were Leeds lads The Final Crisis with a brutal matinee that wasted little time in rousing even the most zombified of attendees. With a debut EP in the works they were the ideal start to a chaotic day.

Things barely let up for a minute as the day turned to night with Carcer City, Demoraliser, Shadows Chasing Ghosts, With One Last Breath and Heart Of A Coward all managing to get the crowd moving. One of the most well established acts of the day were Azriel, who have been around for a number of years now and put their experience to good use during a relentless set.

Next up were Heart In Hand who delivered an energetic performance that saw frontman Charlie Holmes venturing into the crowd and generally laying the venue to waste. It sets a high standard for Bury Tomorrow to try and match up to, but the Hampshire metalcore mob are up to the task during a set that sees crowd surfing galore and a mix of tracks from their two albums.

Of course, the beauty of city centre festivals who, like SummerJam, allow people to come and go as they please is that people are able to explore the wider area. Even if it does just mean a visit to another bar for a bite to eat and change of scene it makes a far more enjoyable day overall and can only good for the northern quarter as a whole. The action even continued the next day, so those with any energy left were able to catch Brutality Will Prevail, Broken Teeth, Hang The Bastard, By My Hands, Crossbreaker, Rumour Mill, Prowler, Splitcase and Survival. However, regardless of whether or not you were lucky enough to make it down on the weekend there are plenty of shows coming up that should satisfy those wanting to get a metal fix in the northern quarter.

Kylesa hit Moho on August 7th, Balance & Composure and Pianos Become The Teeth play the same venue the following evening and people wanting a pop-punk fix can catch Set Your Goals on the 9th. 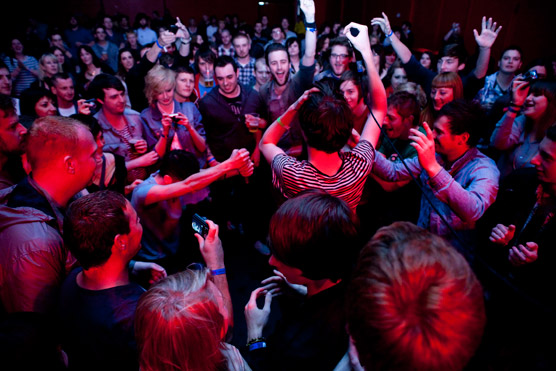