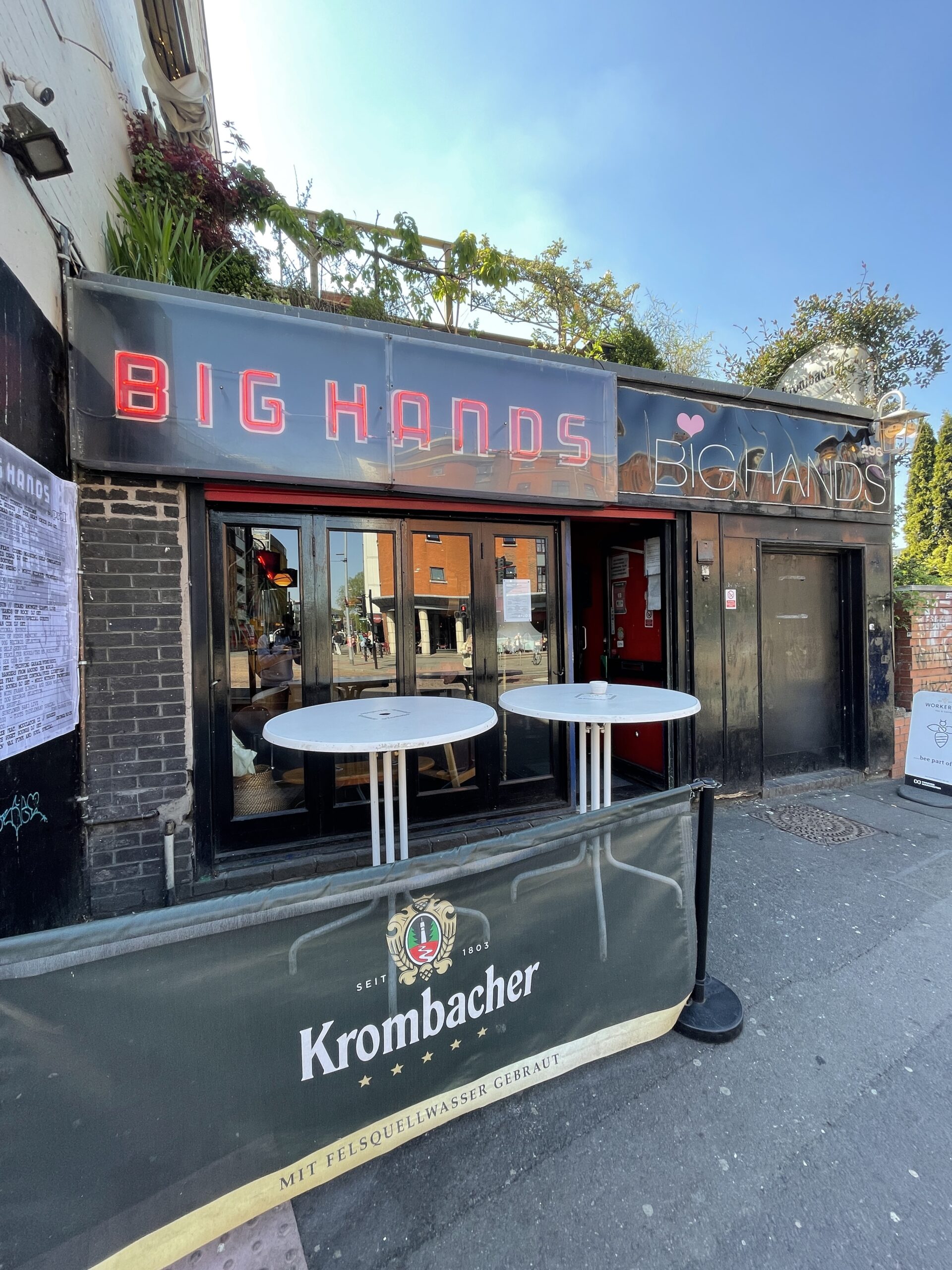 If you’ve ever ventured down to a gig at Manchester Academy, or been a student at Manchester Met or the University of, then you should be fairly familiar with Big Hands.

The bar on Oxford Road has an enigmatic but alluring facade with various shrubs and greenery sprouting from its roof. Its interior is dark and red-lit, reminiscent of a North German dive bar accentuated with sombreros, vintage lamps and a couple of lonesome mannequins. 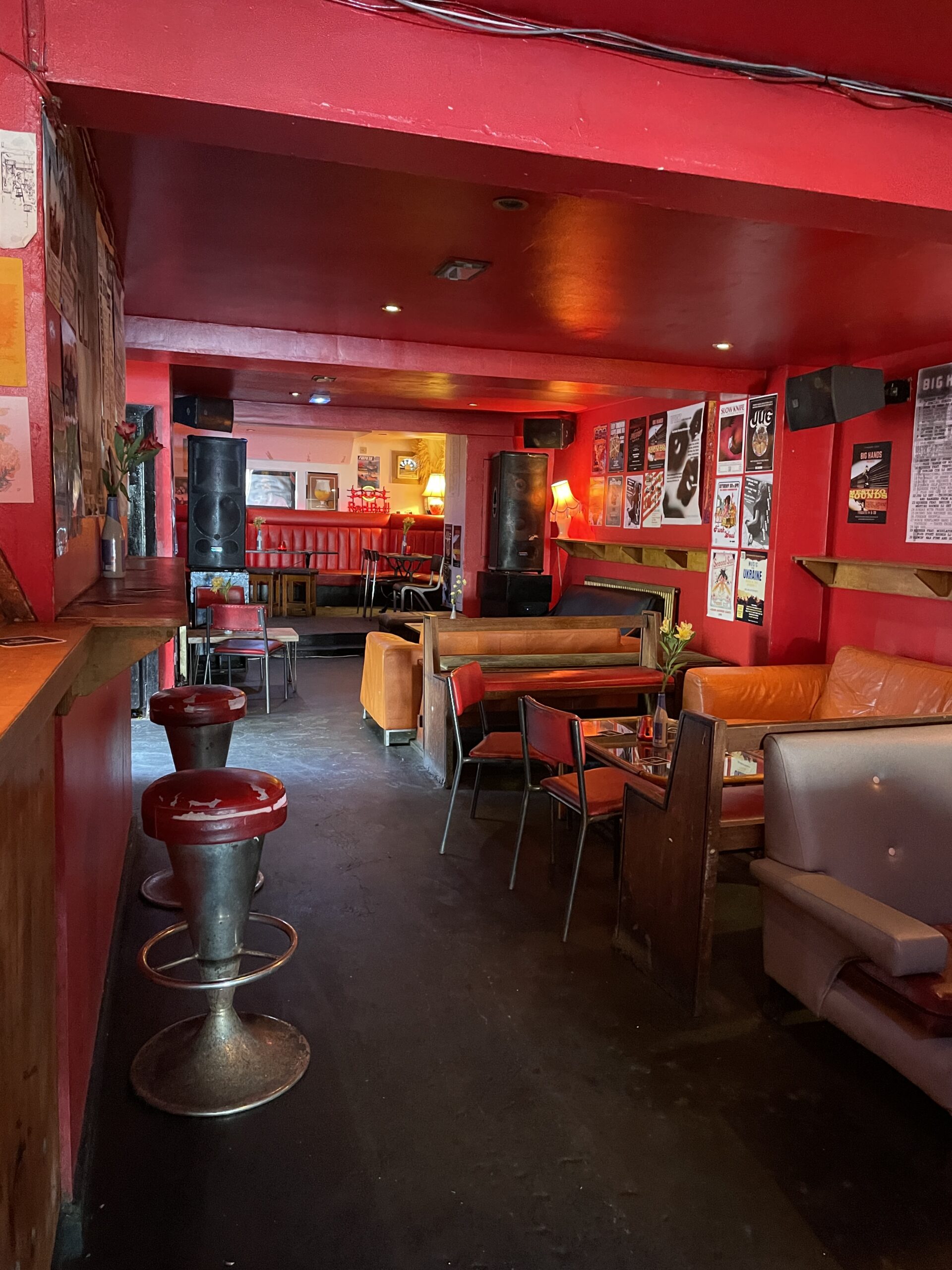 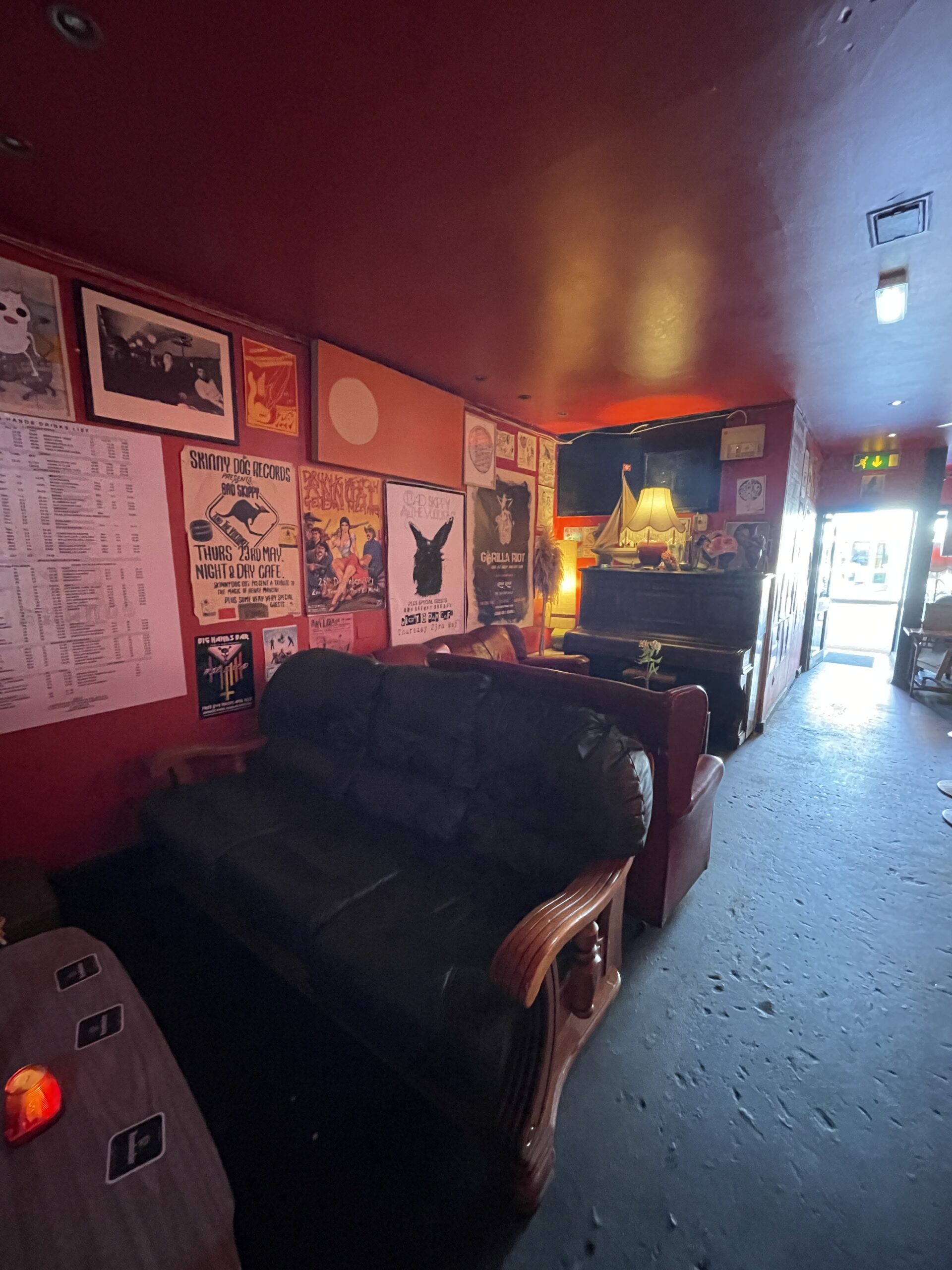 The pub became known as Big Hands back in 2001, when it was taken over by music loving Aussie, Scott Alexander. The Melbourne-born eccentric brought all of his best quirks with him to Big Hands, and wanted to make the bar not just a great place to drink, but a place to fall in love with a new favourite band.

Sadly, Scott passed away in 2018, but the bar has continued his legacy, now run by a roster of his closest pals, one of them being the very wonderful Jazz.

Currently serving as the bar’s General Manager, Jazz explained how Big Hands has become a real cornerstone of Manchester’s creative community: “Those familiar with Big Hands are truly part of our family,” she began. 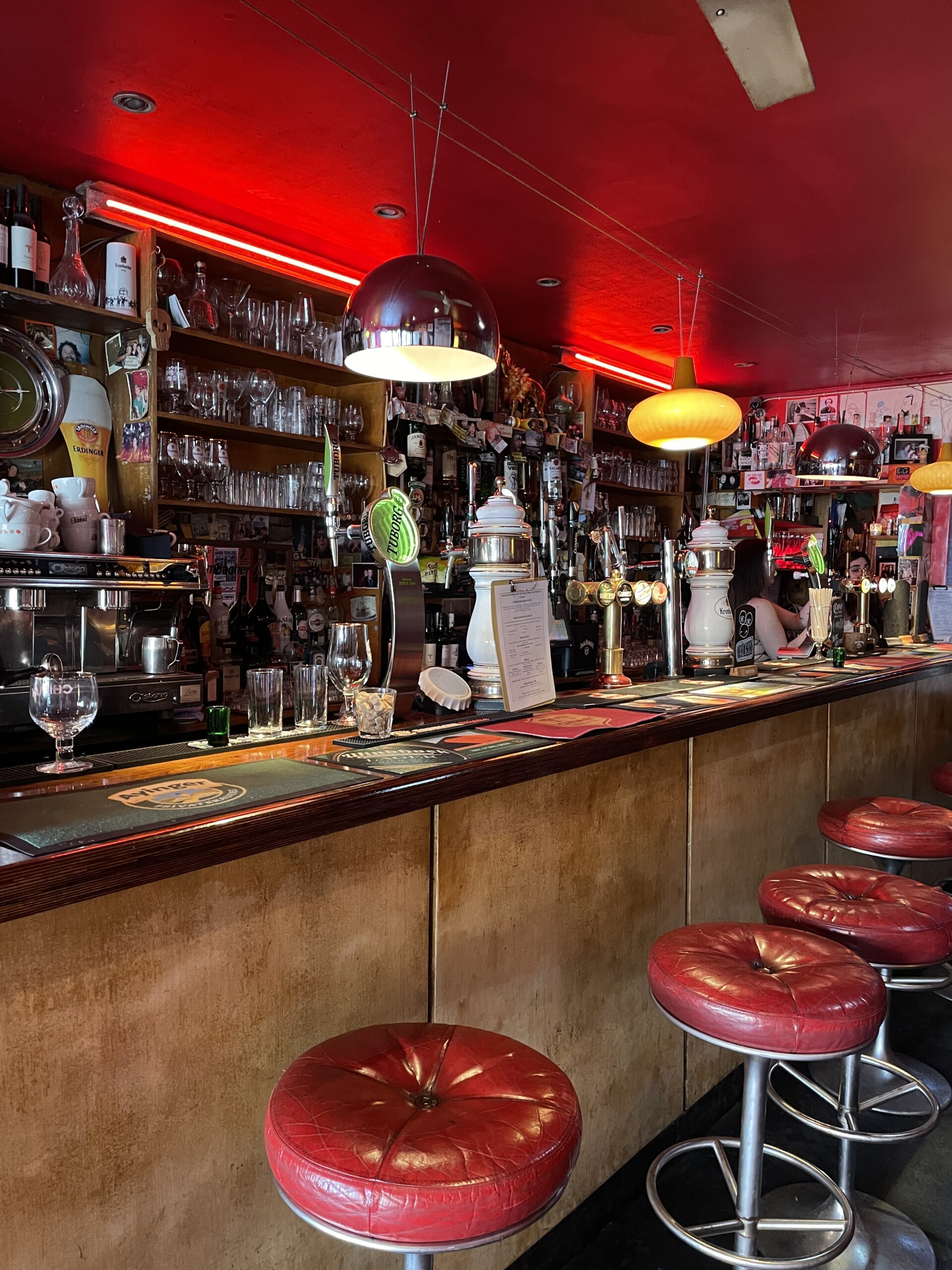 “We’ve got people from all nationalities working at and coming to the bar, and our regulars’ jobs range from scientists to illustrators, chefs, linguists and everything in between. That’s what I love about the place, anyone can walk through the door and automatically feel welcome.”

Big Hands is another pub that has absorbed the interior of a crazy Aunt’s living room. The bar is stocked with not just beers and spirits you’d struggle to find anywhere else in the city, but neon lights, dusty framed memories, records and trinkets that wouldn’t look out of place at a car boot sale.

It’s an intimate space, making it even better for gigs as you become part of the band, no matter who’s taking to the stage that night. Some of Manchester’s musicians are also the ones behind the bar pulling pints, too, making it an unmissable destination for anyone passionate about music, especially local talent. 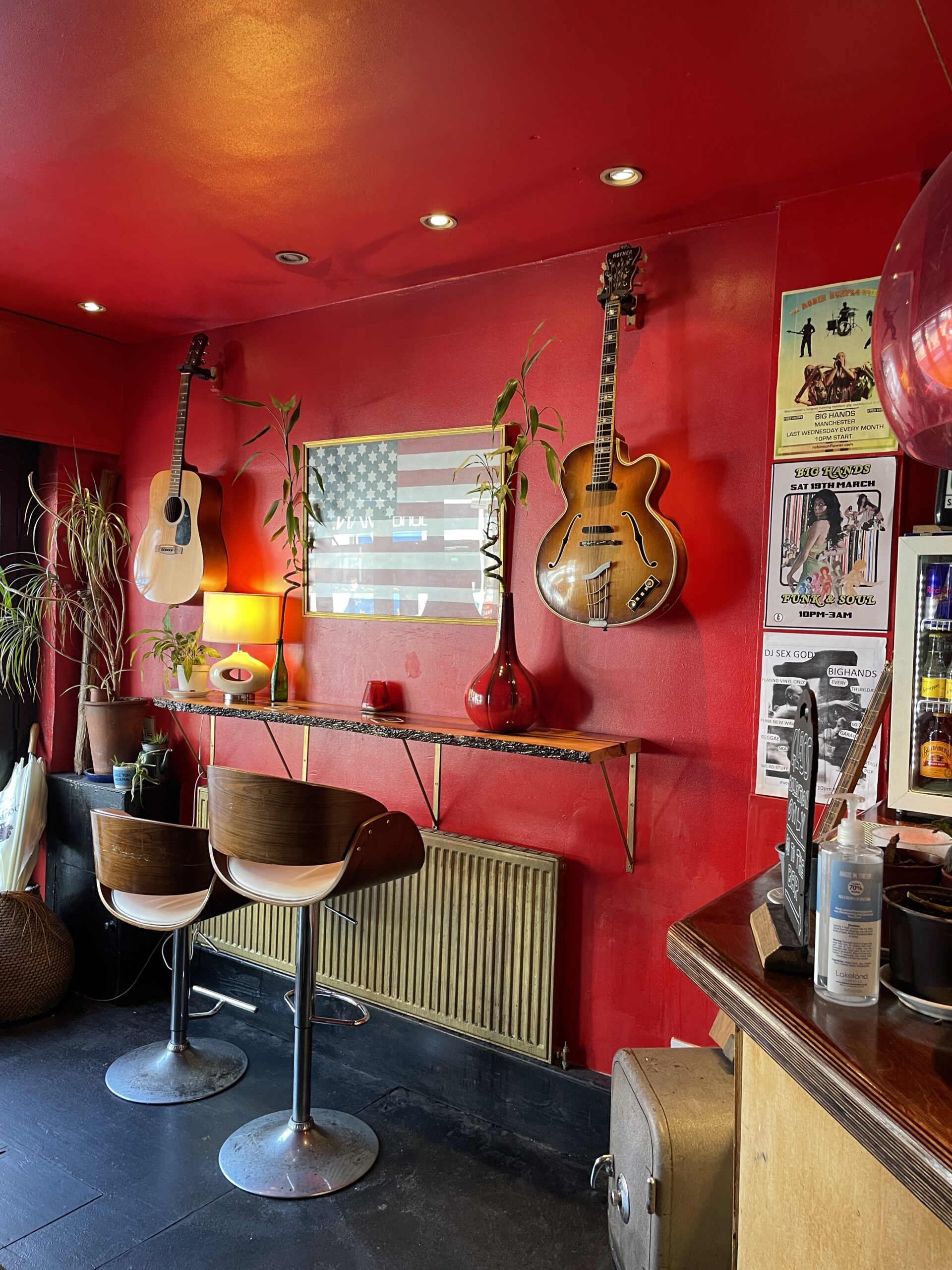 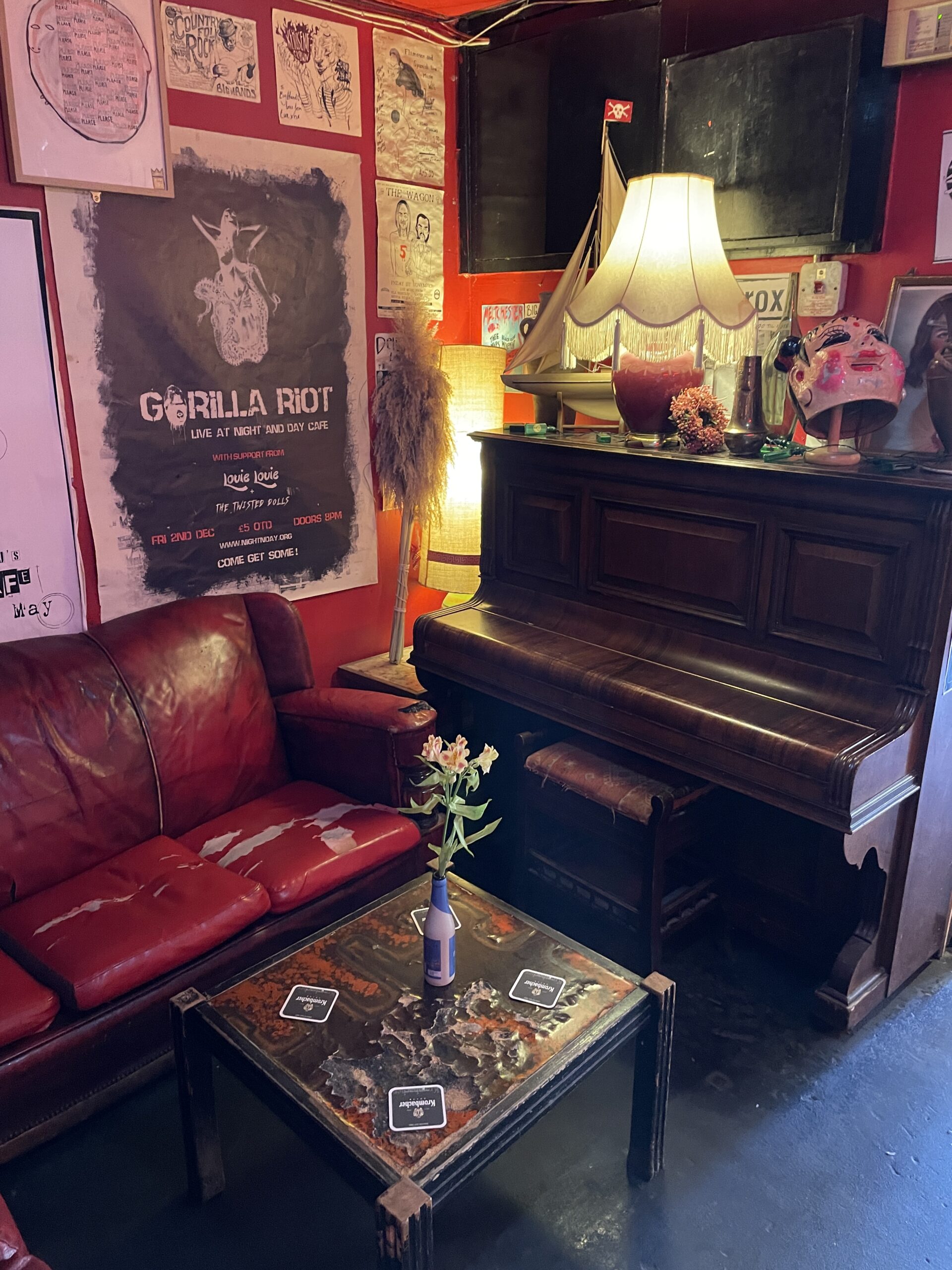 “Music was absolutely Scott’s biggest passion,” furthered Jazz. “He always wanted to give bands a leg up, and we’ve carried that on since he passed. The bands that play here become our friends, bands like Second Sun and promoters such as Sour Grapes for example both put on regular nights here and they’re always great, rowdy events run by a ragtag band of weirdos!”

Big Hands is the heart of Manchester’s DIY scene, a step above the bedroom band but still below venues such as Northern Quarter’s Night & Day Cafe, which is Big Hands’ cousin venue. It emulates an era of music that’s all about having fun and performing in front of your mates for pure enjoyment, before anything gets too serious or commercialised. 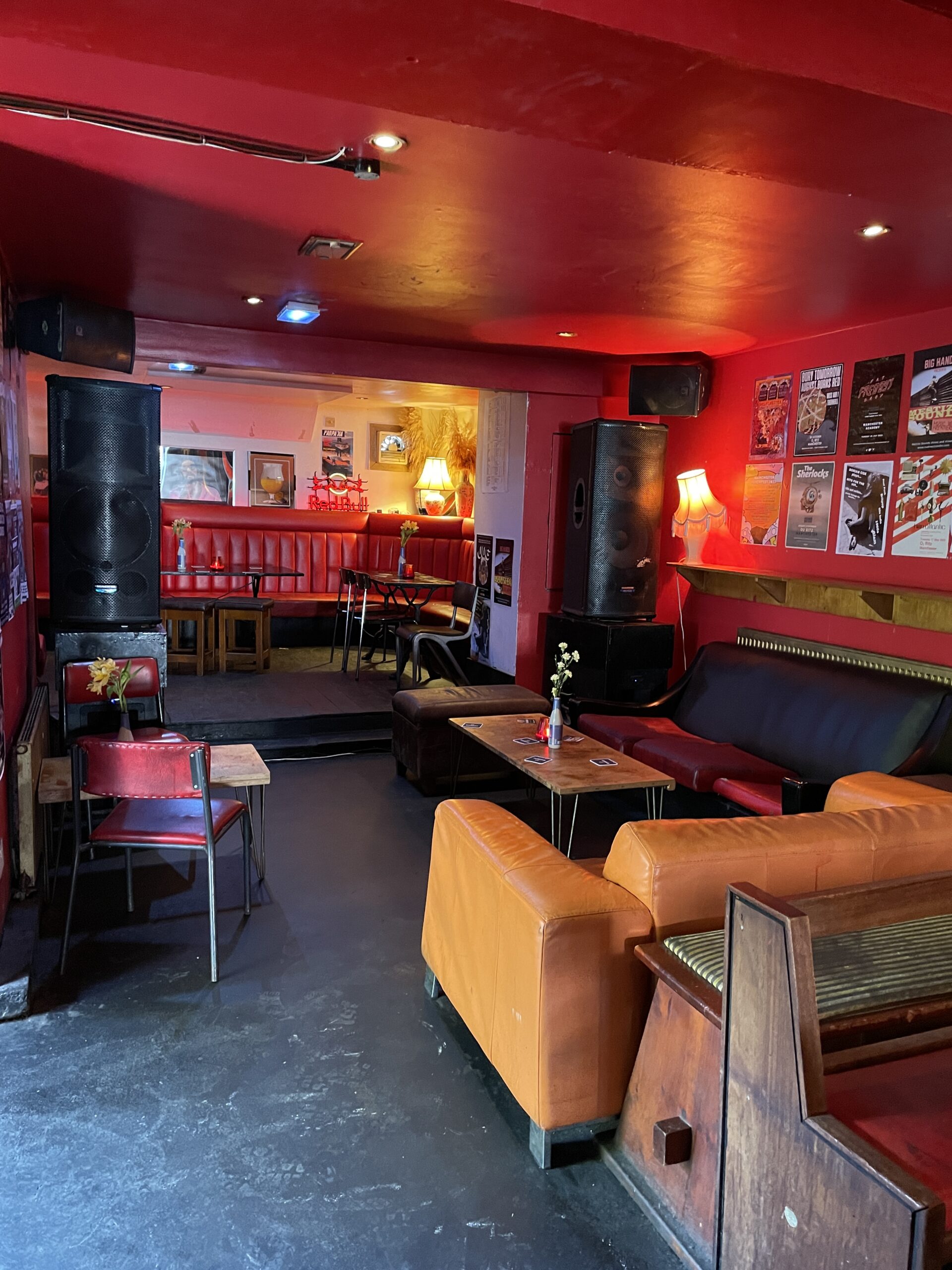 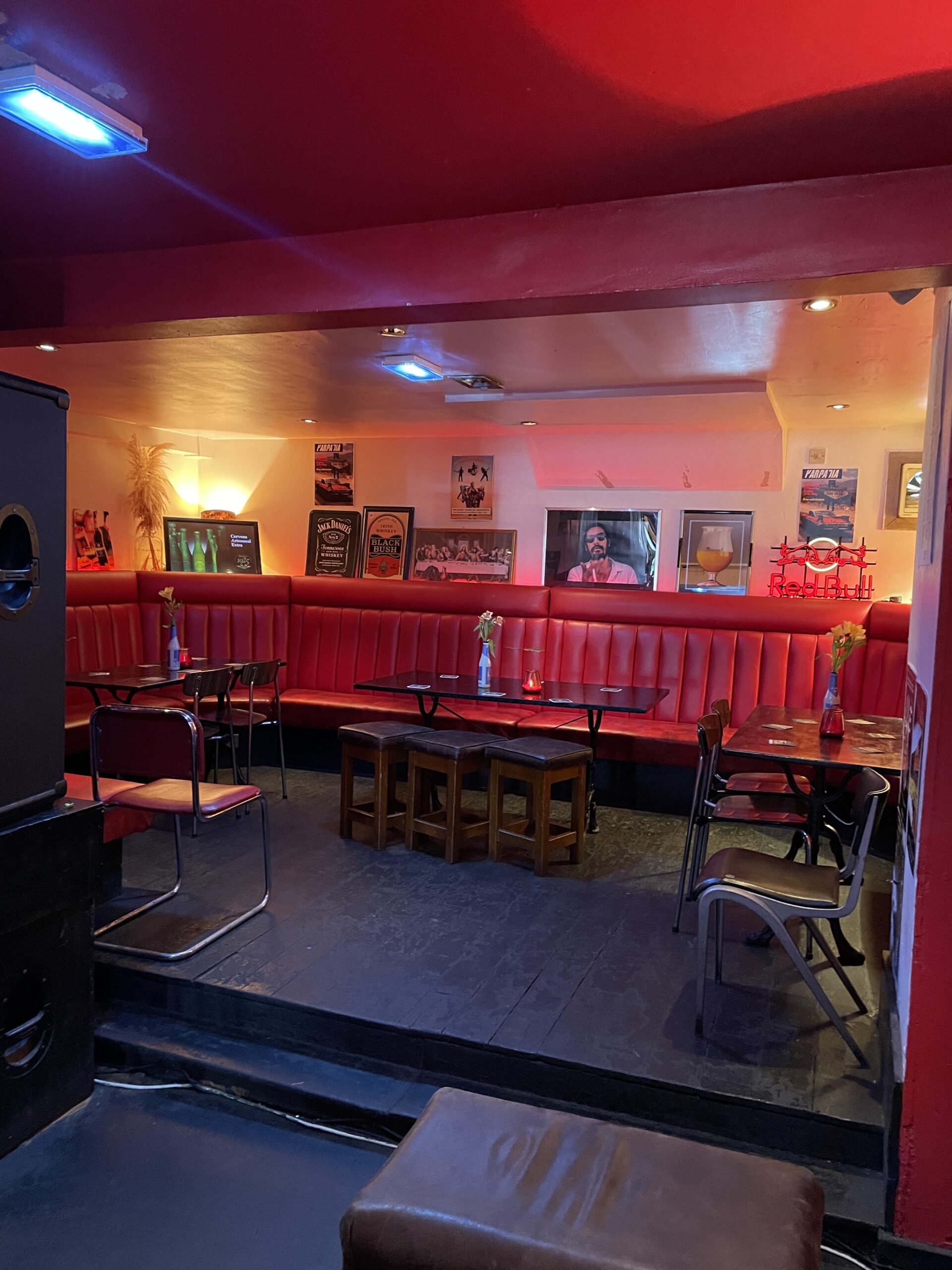 The venue also hosts art exhibitions with the same ethos. “Me and my sister launched Povera last year, which is an art exhibition for local weirdos and creatives, featuring work from filmmakers, artists and musicians,” said Jazz.

“The art was by people aged from around 6 to 72, and we wanted to create a space where people would interact and socialise with each other. If you saw something up on the wall you liked, the person who made the piece would be there in the room, which would then hopefully spark an intriguing conversation.”

As the venue sits so closely to Manchester Academy, it’s seen some famous faces sink a pint at its bar over the years, too, including Bam Margera, Fleet Foxes and Julian Barratt and Rich Fulcher from the Mighty Boosh. But, one of the most memorable has to be a performance by Frank Black from the Pixies, which happened after a power cut at the Academy.

“Frank was one of Scott’s biggest heroes. He came into the bar and, after a few pints, he borrowed Scott’s guitar and performed a set outside of the bar to a huge crowd. The traffic stopped in the middle of the road and there were people on the roof of the bar and the surrounding flats just watching in awe – it was quite a moment.”

Since then, Big Hands’ roof has been transformed into a fully functioning, Mediterranean garden retreat – a place that you want to spend hours drinking Sangria or penning your latest novel, it’s a truly idyllic sanctuary and a passion project for Jazz, who has found a new love for gardening through the space. 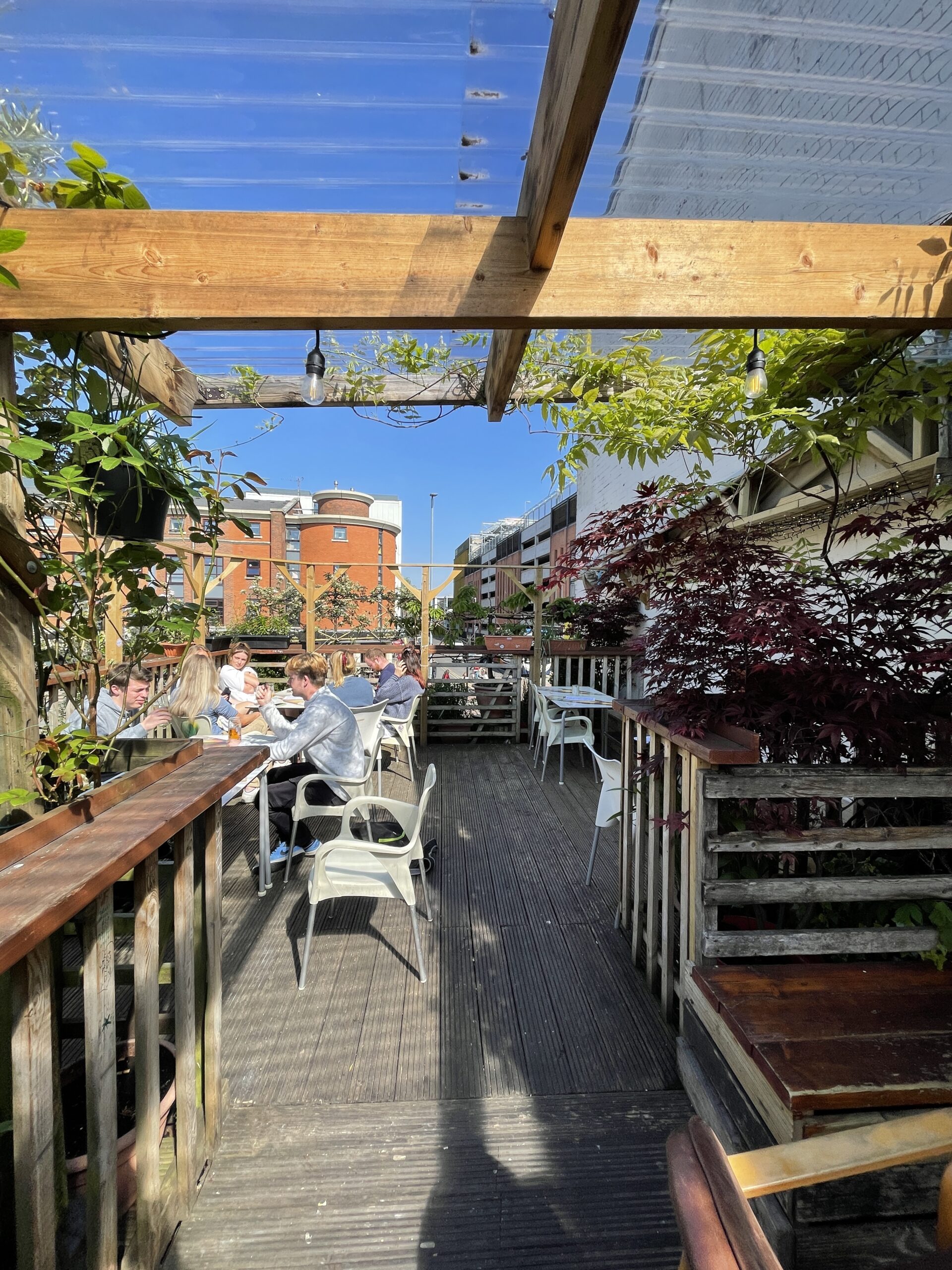 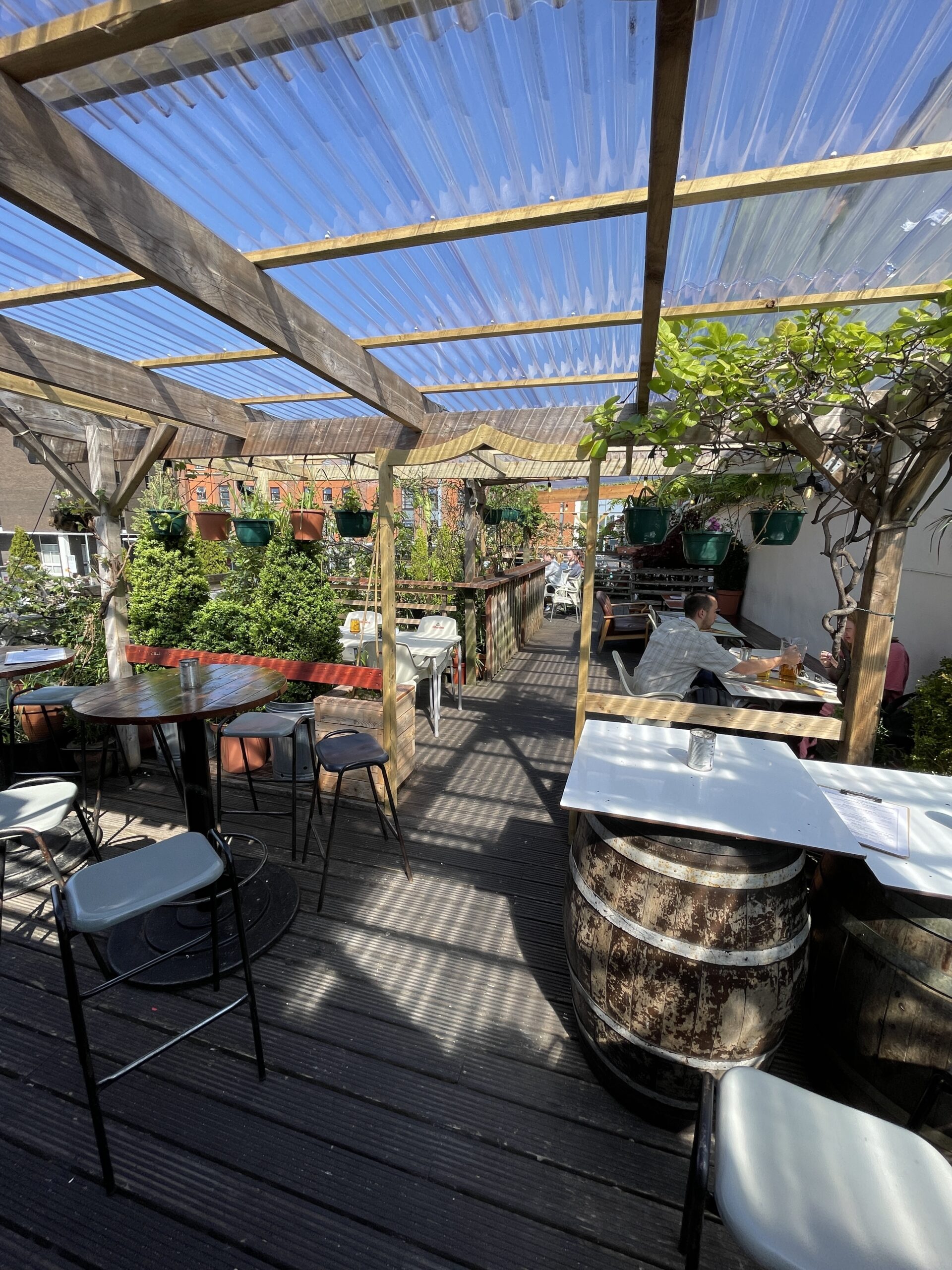 It houses tropical plants and flowers, as well as fruit and vegetables which Jazz then uses to create her own brand of flavoured spirits, a firm favourite being the grape vodka she musters up for the Sour Grapes events.

You’ll also find resident Sicilian chef, Victor in pride of place on the roof of the pub cooking hotdogs, nachos and everything in between, using a bike horn that looks like it was robbed from Charlie Chaplin to let people know their food’s ready. Something that only works in a space like Big Hands.

The venue has a DIY approach to everything it does, from its decor, events, food and booze, Big Hands is intimate and welcoming. You only have to look at its bar to realise that, surrounded by red stools it encourages conversation – something that you’ll struggle to find amongst a handful of the city centre snobbery.