Off The Record is an exciting new event for Manchester in November! Its a one-day, new artist event in various venues in the Northern Quarter taking place this Friday which combines music industry conferences with many guest speakers and discussion sessions during the day, and the traditional musical showcase in the evening.

Off The Record is an exciting new event for Manchester in November! Its a one-day, new artist event in various venues in the Northern Quarter taking place this Friday which combines music industry conferences with many guest speakers and discussion sessions during the day, and the traditional musical showcase in the evening. The catch is, depending on when you read this, the line-up has just been announced a few minutes ago. Twenty-four hours before a festival is not enough time for fair-weather music fans or followers of just one act to get their hair done, pack a bag of banter and get to Manchester, so we should be taking a step back in time to when music festivals were for music fans. 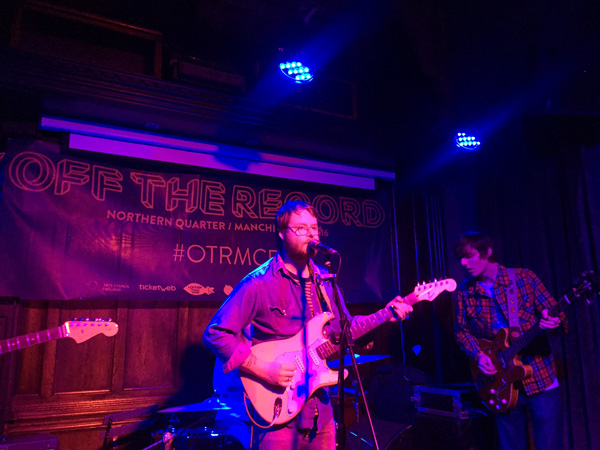 The conferences include a keynote from Manchester band Everything Everything, looking at how to get on the festival circuit for up and coming bands and ‘Putting a gig on Properly’. The first we get to see is a lunch time chat with Tim Burgess ‘A label of Love’ telling all about his record label Ogenesis Recordings. Dave Haslam, Hacienda DJ and Author is conducting the interview accompanying Tim is Camille Bennett one of his artists on the label and straight away it is easy to see the connection between label and artist is not a conventional one. 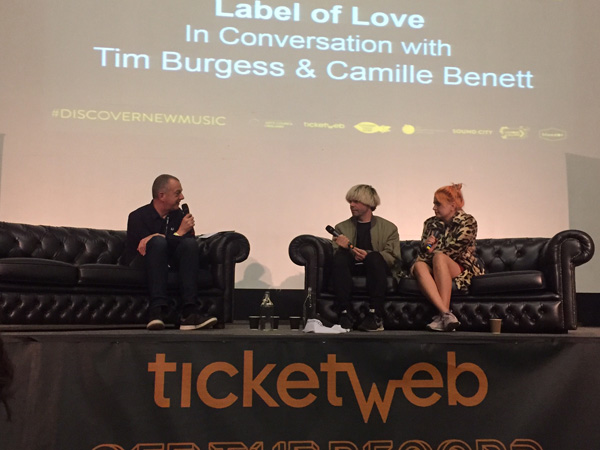 Throughout the chat they openly discuss contracts, managers and how it all ties together to create a label.

DH: “how did you chose who you wanted on your label?”

TB: “it just had to be music i liked, it was that simple and then it became personal.”

The conversation went deeper into the record label incorporation of spoken word and band managers.

TB: “to be honest sometimes managers can freak me out especially how small Ogenesis is, some people prefer dealing with the managers but some want to talk to the band I prefer just to deal with the band. As a new label we know most of the bands are new bands so were growing together I don’t feel any rejection if anyone wants to leave but at the same time I think that everyone wants to stay so it works out good.”

The conversation inevitably turns to the Vinyl Revolution with Camille admitting just releasing a cassette for one of her new songs.

CB: “They are really quick to make. One week to make you don’t even have to put your music on them as no one will listen.

having these lovely things is a way for people who like your band that they can physically own something. It’s having the artwork.”

The conversation is opened to the crowd with people seeking advice for their labels and interrogating burgess further.

Q: What is the drive behind the record label

TB: “For the bands to be cool and the sleeves to look good, and hopefully break even.”

Night descends on the northern quarter and the music begins. Across 6 venues it’s hard to decide who to watch trusting the PICKERS in their musical know how. Aatma is the first venue to catch a glimpse of Loa Loa The three-piece, formed of a shoe salesman, a van driver and a marketing intern from Brighton, take their name from an eye worm which, according to the bands Josh Rowley, is their spirit animal. Their music is very heavy and the band are totally immersed in their music, you could tell that they wanted to carry on and smash up the stage.

Second on the Castle Line up Blueprint Blue, Tim B’s choice, the intimate venue is filled with Burgess’ following who have put their trust in his backing. One of the more experienced bands being formed in 2013 compromising of Drummer Melissa Rigby and bassist Huw Webb and Elliot Hayward. The vibe is very chilled with country and folk aspects merged in to their songs. With very little lyrics the instrumentals echo through the tower. The London band have a Bee Gees feel and the crowd are loving every song.

A run across a rainy NQ and in to the warmth at Night and Day for a band that had been highly recommended by a number of sources, Halifax’s The Orielles. They get in a decent crowd for a set so early in the day. Comprising of Henry (Guitar) and Siblings Sidonie (Drum) sand Esme (Bass). The groups sound is fresh and new, Henry fades in and out of a trance like state during songs alternating between smiling at the crowd with his tongue out and smashing out arguably the best head bang the stage has seen, its hard to focus on anything else. He comes back to reality to speak to the crowd ‘Its Friday lets have a party’ One to look out for in the future, check out their video ‘Joey says we got it’ for a taste of what to expect, weirdly mesmerising.

First up at Gulliver’s is Lewis Bootle, a certain Frank Turners choice. It’s hard not to strike comparisons between a young Ed Sheeran and Lewis whether he likes it or not. He brands himself as ‘a singer/story teller’. The room is full by the end of the set, the 22 year old another one to keep your eye on for future line ups.

Final venue to visit soup kitchen to catch the full set of indie pop outfit, Saltwater Sun, another hotly anticipated act. Ahead of their debut EP ‘Wild’ they deliver a powerful performance. Lead singer Jenn Stearns eases into the occasion and really comes out her shell for the last few songs battering the drummers symbol.

A unique music experience formulated by the brains behind Sound City Festival, Kendal Calling, Bluedot and Louder than War offers a different angle on what a music festival should be.