Neighbourhood Weekender brings together an incredible weekend of live music across three stages, alongside food, drinks and a unique community feel.

After it’s spectacular 2018 debut at Victoria park we are excited to see how the local festival has grown. Victoria Park is an easy 30 min drive from Manchester or 50 min on the train from Piccadilly.

Day One offers some very strong acts, the type of bands who won’t be this low down on the line-up for very long; Yonaka, Glass Caves and Ten Tonnes.

Stage Two hosts Ten Tonnes, younger brother of Saturday’s headliner George Ezra, without the deep soulful tones it’s hard to look past the physical resemblance, coming off the success of his self titled album ‘He’s beginning to step out of big brothers shadow’

The Twang and Maximo Park are another couple of massive names that have early afternoon slots, a big clash for most, fortunately punters are spoilt at this smaller than average festival, the Two stages are only a 5 minute stroll apart.

Moving up the bill is local lads and Finest favorites Larkins, they get their slot on Stage Three, if you missed them fear not, they have just released an intimate Deaf Institute show for all you locals. Got to feel for the boys as one of the biggest acts Tom Grennan kicks off the same time.

Grennan has recently recorded a session in Indy mecca, Jimmy’s, the video online video is worth a check. By 6pm there’s already been an array of acts to challenge most festivals of this size.

Before you know it the big guns are stepping out on stage, another tricky clash decision with old guard Primal Scream and new boys The Hunna. It definitely creates a generation split on the mixed Neighbourhood crowd, whichever choice was made the majority reconvene on the Main Stage for George Ezra.

Hard to believe the Hertfordshire singer songwriter is still only 25 and has firmly cemented himself as a headline act, he is back in the area next week when he headlines Parklife.

Day Two, another lower bill packed with up-and-coming talent, stand out acts Jade Bird, Clean Cut Kid and Slaves’ best mates Ladybird all get things going, after a long wait in the queue we kicked off our Sunday with the indie rock Reading quartet The Amazons.

The lads are busy touring their second album ‘Future Dust’ smashing through the festivals already, making their way from Radio 1’s Big Weekender the day before. The lads looked all smart in suit jackets raring to go. Their Seven track set list opens with ‘Mother’ followed by ‘Stay With Me’ ‘25’, ‘In My Mind’, recent single ‘Doubt It’, ‘Junk Food Forever’ finishing their set with ‘Black Magic’. The Amazons are the perfect festival band, setting good vibes for the day ahead.

Local rock band The Slow Readers Club who have been getting many plaudits on Radio 6 of late are warming up the main stage. With three album releases over 10 years they have a hardcore fan base tht kick the main stage into life.

Next up is Glaswegian musical phenomenon Gerry Cinnamon on the main stage, he draws in a massive crowd. He appears on the main stage solo with just his guitar and the occasional spot of harmonica and drum pedal, his voice is raw.

The sun is out and the crowd are loving every minute with flares going off every track. Gerry smashes through a Nine track set list; Opening his set with ‘Lullaby’, ‘Sometimes’, ‘Fortune Favours The Bold’, ‘Diamonds In The Mud’, ‘What Have You Done’, ‘Canter’, ‘Belter’, ‘ Kampfire’, finishing on ‘Discoland’ Gerry is certainly the festival highlight so far!

We head over to Stage Two to get a good spot for Sam Fender who was on the top of our list today, unfortunately he had cancelled due to an illness, so we make our way back to the main stage for Madchester band Charlatans. ‘North Country Boy’, ‘Plastic Machinery’, ‘Weirdo’, ‘Different Ways’, ‘The Only One I Know’, ‘Just Looking’, finishing on ‘Sproston Green’. The Charlatans are still a fan favourite in these parts and don’t show any signs of stopping.

Indie rock legends The Vaccines are today’s chief support, the London four piece are one of the weekend highlights. We couldn’t stop watching lead singer Justin Hayward-Young’s emotion on the big screen.

They treated us to all the classics you’d want from Vaccines ‘If you wanna’ ‘I always knew’ and ‘I can’t quit’. The whole set is peppered with classics and makes sure the crowds vocals are warmed up ready for Mr Ashcroft.

One of the weekend’s biggest disappointments was the late withdrawal of Stage Two headliner Slaves, Bassist Laurie is expecting his second child and rightfully didn’t want to be walking out for an encore while his wife is in labour (why he couldn’t have cancelled this 6 months ago we will never know).

With such a late replacement, Neighbourhood Festival would be forgiven for putting Piccadilly Rats on the line up, however, they come back strong announcing Circa Waves as the new headliner, definitely targeting the local younger crowd as an alternative to Ashcroft.

Richard Ashcroft, rock royalty, multiple Ivor Novello award winning frontman of one of the greatest bands to come from these shores. He enters the stage with a confident northern swagger that has become synonymous with his character, sporting a diamond bomber to match.

Tonight we are treated to 90 minutes of Ashcroft and Verve nostalgia. He attacks songs old and new; ‘Out of My Body’, ‘This is How It Feels’, ‘Break the Night With Colour’, ‘Space and Time’, ‘Surprised by the Joy’, ‘They Don’t Own Me’, ‘A Song for the Lovers’, ‘Velvet Morning’, ‘Music Is Power’, ‘That’s How Strong’, ‘Hold On’, ‘Lucky Man’ and for the Encore; The Drugs Don’t Work,

He finishes the only way he could, ‘Bitter Sweet Symphony’ the man has finally been credited this week with writing one of the greatest songs ever made, Rolling Stones have signed over all the rights over after a long battle over the sample used from a Stones orchestral version as,

Aschroft declares. “This has always been your f@cking tune, this is your f#cking story, this is history right now”

It’s a huge finish and the perfect end to a fantastic festival!

Neighbourhood have already signed for another return 23rd & 24th May 2020 for another bank holiday weekend full of music, arts, food and fun. 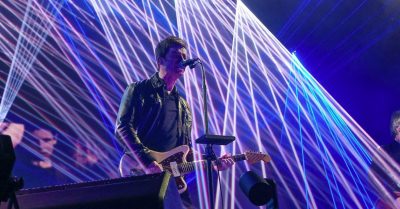