Interpol | 3 Sept | Albert Hall
Interpol are back at the Albert Hall, celebrating the 15th anniversary of their beloved debut, ‘Turn on the Bright Lights’ which they will perform in full, each and every night of their tour. Word has it the band plan to release a new album in 2018. It’s going to be a special gig and there are only 2 UK dates so all tickets have gone, but you can join a waiting list.

Ryan Adams | 14 Sept | Apollo
Ryan was in Manchester early in the year playing a secret gig at the Soup Kitchen. He is back and kicks off his huge UK tour this month at Manchester Apollo. He has just released a new album ‘Prisoner’ The gig is sold out so keep a look out for tickets.

We Are Manchester | 9 Sept | Arena
Manchester Arena will officially reopen on September 9th with a big night of entertainment WE ARE MANCHESTER. Some of the biggest names in music are set to play; Noel Gallagher’s High Flying Birds, The Courteeners, Blossoms, Rick Astley, Pixie Lott, Poet Tony Walsh and many to be announced. The evening is hosted by Russell Kane. All profits from the concert will raise money for the Manchester Memorial fund. Liam has also been teasing at a Gallagher brother reunion.

The Sherlocks | 15 Sept | Academy
The Sheffield quartet who have recently supported The Kings of Leon and The Libertines, are now on their own UK Headline Tour 2017. The Sherlocks have been relentlessly touring the UK and have added even more dates to their mammoth tour schedule. Grab your tickets for £15.40

LCD Soundsystem | 16 & 17 Sept | Warehouse Project
LCD Soundsystem, the NYC dance-punk pioneers kick off their 2017 UK tour with two big nights at the wonderful Manchester’s Warehouse Project.
They have just released their fourth album ‘American Dream’ which is their first since 2010’s ‘This Is Happening’. There was a huge demand for tickets to these shows so unfortunately they are both a sell-out, keep your eyes peeled.

Jake Isaac | 17 Sept | Night & Day Cafe
South London singer songwriter Jake just released his debut album ‘Our Lives’ he will take the stage to an intimate crowd of Night & Day Cafe mid-September. Jake is hugely talented with a soulful, refined and honest voice, you would be a fool to miss him at this gig. Tickets are available here.

The National | 22 Sept | Apollo
The US band The National are in Manchester playing the Apollo as part of their world tour. The guys have been busy playing Glastonbury and Haven Festival this summer and with their new release, 7th studio album ‘Sleep Well Beast’ which is out this month. It’s going to be huge, so sorry folks it’s another sell out but as ever secondary markets and Facebook pages are sure to have some tickets available nearer the time.

Mr Jukes | 24 Sept | Academy 2
Introducing Mr Jukes, the frontman of Bombay Bicycle Club, Jack Steadman is on his debut tour with his first ever solo album, he has been working on it for the last 4 years album named ‘God First’ which features De La Soul, Horace Andy, and more. The album is playful, soulful, electric and jazz heavy. This is our most recommended gig for this month so get your hands on a ticket quick before they go

Lorde | 26 Sept | Apollo
Young New Zealand singer Lorde performed a spectacular show at this year’s Glastonbury, she kicks off her tour this month following release of new album ‘Melodrama’ David Bowie saw her as ‘the future’ of music so It’s unsurprisingly that the gig is sold out so keep a look out for spare tickets. She also plays London, Birmingham, Brighton and Glasgow.

Romare | 30 Sept | Hidden
This month’s club night to look out for is Archie Fairhurst AKA Romare (Live) at Hidden. There is plenty to get excited about on the line up; Auntie Flo, Dixon Avenue Basement Jams, Cervo. Romare is signed to Ninja Tune and is making music under the moniker Romare, Fairhurst uses a collage-like approach to his production, inspired by the method adopted by American artist and namesake Romare Bearden. Cutting and pasting together samples, bass lines and percussion, Romare’s sound is warm and groovy, with disco influences which is reflected in his latest record ‘Love Songs’. 3rd release tickets are available 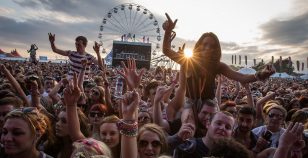 The Best Festivals in and around Manchester this Summer!