Bristol legends Turbowolf have released their new album The Free Life as well as announced a UK tour which naturally includes the greatest city on Earth - Manchester.

An indisputable masterpiece for this fractured era, across its 11 stellar tracks these four Bristol mavericks – Chris Georgiadis (vocals/synths), Andy Ghosh (guitar), Lianna Lee Davies (bass) and Blake Davis (drums) – push back the boundaries of music with ambition in their heads and disruption in their hearts.

Produced by the band themselves and mixed by longtime associate Tom Dalgety (“Our spiritual guide, our God,” says Andy), The Free Life harnesses the insanity crackling through the air right now, distilling it into a set of songs that veer gloriously between the anthemic and the gritty, the psychedelic and the pop, the unhinged and the profound.

Throughout the album, the band don’t so much bend the rules as wholeheartedly throw them out of the window; psychedelia smashes into punk and pop crashes into metal whilst previously unknown sounds emerge.

The title track, and first single, begins as an ominous industrial-metal stomp, only to mutate into a light-speed punk rock thrash, that then blossoms into an arena-filling chorus. You can see the kaleidoscopic video for the track here, which with its delirious visuals and retro fuzzy vibes sums up the album’s dynamics.

“Guitar music has become one of the safest and most predictable genres around,” says Andy Ghosh. “It’s been going on like that for so long now that people have actually forgotten the whole point of rock’n’roll was to be dangerous and scary and unpredictable. Things are stale and boring. We’re trying to shake things up and make them interesting again.”

On the creative process behind the new album, Andy says, “We tried to go back to how we used to write songs at the start. But also, we tried to make it the strangest album we’ve ever made. The only attitude was to embrace the strange, to not shy away from anything that seemed a bit wrong. If it sounded good, it’s going in.”

“The whole point is to push boundaries and see how you can fuck with things, musically,” adds Chris. “Do things the wrong way on purpose. That’s the spirit of punk rock. The attitude of this is pure punk rock – we do it our way, so even if we do it the wrong way it’s the right way.”

New musical universes spring into existence throughout The Free Life. Designed as a pure listening experience, a transcendent, transportative journey with its own twists, turns and hidden doorways, the band have yet again proven why they are one of the most exciting and unique bands in the British music scene. 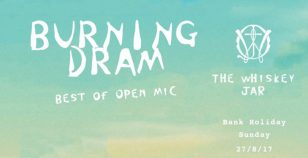 Burning Dram: The Best Of Open Mic 2017 at Whiskey Jar