Manchester is awash with fantastic DJ nights. Everyone from intensely alternatively newbies to reliably trust-worth regulars get to the decks to the decks of our city and spread their musical wonderment about the place. Having recently returned from Berlin, however, I was struck by both a similarity and a huge difference in the way a lot of the bars there run things; this made me think of FREITAGS at Common.

Something that struck me in Berlin was that many of the bars manage to host nights that are, in equal measure, way more laid-back and acutely more focused. So many seemed to embody a fantastically balanced yin and yan of music intense, easy enjoyment.

It is perhaps no coincidence then that the night I first though of upon my return is run by a native German!

FREITAGS, is a regular Friday feature at art orientated Common Bar. Demonstrating the intent aural focus I mentioned, FREITAGS has an acute musical philosophy and claim to:

“join the dots between Kraut, Baltimore Club, House, Indie, Electro, Outsider Pop, Disco, Cosmic Nonsense, forgotten gems and Balearic bangers” in a night that has steadily build up a flawless reputation as  “an excursion of musical wonderment”

They have residents DJs on rotation as well as special guests each month. I got together with the organiser to find out more about what makes FREITAGS such a success in Manchester.

Can you tell me who created FREITAGS and why?
FREITAGS was created by me (Sebastian Matthes) as Common was looking for someone to take over the Friday nights.  I have been a regular both at day and nighttime and loved what they were doing. My background is music photography and I felt confident enough to give it a go as I have a strong network of DJ’s and artists. We are still here 3.5 years later so we must do something right…

What is FREITAGS?
FREITAGS means Fridays in German (my home land) and is a weekly hoedown at Common in Manchester’s Northern Quarter.

What is unique about FREITAGS?
We have a great rotation of resident DJ’s (Will Tramp!, Benjamin Yourself, Esqueezy, Craig Campbell and the Now Wave DJ’s).

All have a history of club promotion and DJing at some of the best nights in Manchester and beyond so the varied musical content works great for us and keeps it really fresh.  We prefer this format as opposed to having one resident week in week out that can get stale quickly. It also gives them a chance to play some more unusual music that is not necessarily aimed at the dance floor but works in a bar environment.

Why is music important?

To quote our favourite German philosopher Friedrich Nietzsche:
‘Without music, life would be a mistake’

How do you select which DJs to work with, both residential and visiting?
As I said before, most of the people we have to play are already involved in other projects that I enjoy or admire so it was a logical progression to get them involved in the night at FREITAGS.

FREITAGS is held at Common, which has a strong artistic identity in the Northern Quarter, why did you choose Common as the FREITAGS location?
I have been a regular for as long as I have lived in Manchester. Everything the place had to offer impressed me. It’s that easy really.

As well as joining the dots of different musical genres, how important do you think it is to join the dots between music and art?
I think they both inspire each other. Like my photography is inspired by the artists I’m shooting. We have a strong relationship with Rob and Graham at Teacakedesign. They’ve created FREITAGS’ identity that goes very well with what we have to offer. Common constantly evolves as an art space so does FREITAGS with it’ musical offerings.

What does the future hold for FREITAGS?
We want to do a banging club offshoot called DAS RAVE where we play German techno and booty bass all night.

You can find out more about FREITAGS here
Or go to Common yourself this friday for “An excursion of musical wonderment ”
39 to 41 Edge Street, Northern Quarter, Manchester, M4 1HW 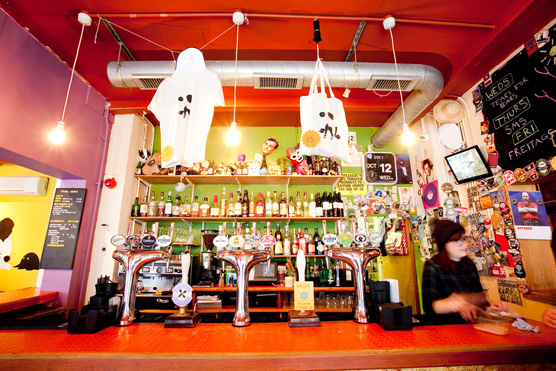