The Lowry prepares to welcome Benjamin Britten’s only commissioned ballet, The Prince of The Pagodas, to its Lyric stage, performed by partner company Birmingham Royal Ballet.

This re-working by artistic director of the Birmingham Royal Ballet David Bintley opens in Salford on Thursday 30 January and runs until Saturday 1 February 2014.

The Prince of The Pagodas tells the story of Princess Sakura, in mourning for the death of her brother and the slow disintegration of her once all-powerful father, the Emperor of the Chrysanthemum Throne. Presented with a choice of four powerful and wealthy husbands, Sakura’s memories of the true love she once felt for her brother gives her the courage to refuse her suitors.

When a fifth suitor arrives at the Palace, a scaly Salamander, Princess Sakura throws herself on his mercy. The Salamander Prince takes her on a long and dangerous journey through the elements of earth, air, fire and water to his magical kingdom, where Sakura’s adventure truly begins.

Manchester’s Finest met up with David Bintley to discuss what to expect from this Japanese fairytale when it takes to the stage.

MF: The Prince of The Pagados is well known in the ballet world for never really having worked with audiences. How challenging was it coming to this as a choreographer?
DB: It’s the third version in this country and it has had that reputation for a long time, hopefully it will end here. I think when it was originally done it was John Cranko’s first full length ballet and he was very young at the time – together he and Britten made a ballet where the story was not very good. There are a lot of loose ends that aren’t tied up. The original intention from the choreographer was to provide a lot of dancing and just have a story to hang that on (which is what essentially has made the production not really work). In the past the story hasn’t made that much sense and gripped the audience. I’ve taken the basic story and re written it a little bit, introduced a few new characters and made it more of an exciting narrative.

It does look visually stunning especially as in parts where we have got Mount Fuji in the background plus we go to Bali and have Pagaodas – it’s very exotic.

MF: Your production of The Prince of The Pagodas was first performed in Japan in 2011, how did the audiences respond there?
DB: My production in Japan was directly inspired by Japanese culture, art and stories. The original story is set in the Far East in a type of mythical China but I based my version in Japan because I was making it there. I used lots of cultural artistic references, which was nerve wrecking as it’s such a complex culture and I didn’t want to offend audiences. But it went really well; they embraced it and thought it was fascinating. I’m intrigued to see how it works on an English audience. I think it will be more interesting as it will be an English man’s view of Japan performed in England.

MF: Are you bringing the Japanese influence to this UK premiere?
DB: Some of the costumes have been remade and improved on since it was performed in Japan. It’s very rich and beautiful to look at – Rae Smith (Olivier award-winning designer) is fantastic and she has constructed this ‘Japanese fantasy’ – parts of the ballet are traditional costume and then we go into fantasy. The Japanese invented Manga in the 1800s with their wood block prints, (the culture itself was invented in Japan), and that is what is reflected in this production. It does look visually stunning especially as in parts where we have got Mount Fuji in the background plus we go to Bali and have Pagaodas – it’s very exotic.

MF: After the UK Premiere at The Lowry where is the next stop?
DB: After The Lowry it’s back home to Birmingham, onto Plymouth and then finally to the Coliseum for its London premiere where we perform as part of the centenary celebrations for Benjamin Britten. This is the only ballet Britten wrote and it’s a fantastic score. I’ve loved this music now for 30 years and it’s never been able to maintain its place in the repertoire and it really is wonderful. If my production works then it means that audiences who see this production will have the chance to hear one of the greatest ballet scores of the 20th century. 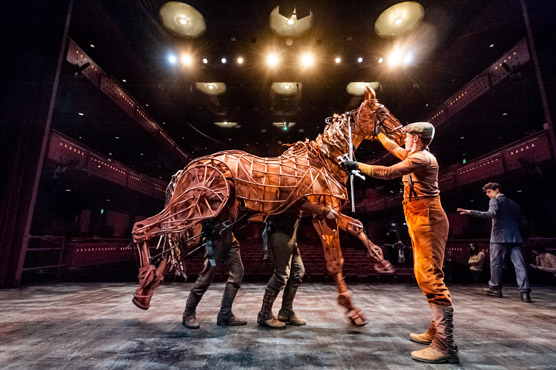