I’m sure Simon Wood is sick and tired of everyone mentioning MasterChef around him - so I’m not going to.

Wait, I just did it. Ah well – let’s move swiftly on. The thing is, nobody needs to mention it anymore -since winning Simon has managed to create a restaurant experience that stands on its own, with the food to match.

Many people proclaim Manchester to be reluctant to embrace fine dining, but Simon has managed to walk the tightrope between casual and high-end dining surprisingly well, offering both an a la carte menu and taster menu in a relaxed and comfortable setting.

This week they unveiled a brand-new menu and I went down to check it out.

In true ‘critic’ style I’m going to tell you what I thought – but if you really want to know – just head on down and give it a go yourself. Say Hi to Simon too – he’s a lovely bloke.

To start with we were treated to a couple of cheeky little snacks on the table, giving you a bit of an insight into what to expect from the food and indeed the evening.

I was immediately enamoured by a little Beetroot Macaron sandwiched with goat’s curd – Simon certainly likes to have a play around with expectations here.

Moving swiftly on and we sampled Simon’s very own version of ‘Garlic Mushrooms on Toast‘, which isn’t at all what you’d expect.

For one it comes in a bowl, and it seems that there’s not a slice of Warburton’s in sight. This is a dish of exceptional texture and contrasting flavours, with a strong hit of wild garlic straight away (no kissing tonight) juxtaposed with the crunchy breadcrumbs and umami-packing mushroom ketchup.

Next up was a single exquisitely cooked Orkney Scallop, resting on strings of white beetroot (which I didn’t even know existed) and drizzled with a subtle crab oil. A final touch to the dish is a little scoop of Exmoor caviar which adds that distinct salty complexity to the meaty scallop.

Quickly devouring the scallop, I struggled a bit twisting the white beetroot up like tagliatelle, although perhaps someone more dexterous as I will be fine.

Something that I perhaps wasn’t looking too forward to came next – Rabbit with liquorice and prunes (£9.50). Sounding like something my nan would have cooked during a particularly difficult week in the war – this dish subverted all of my expectations with its simplicity and subtle flavours.

Wrapped in Parma ham, this is probably the most accessible rabbit dish I’ve ever tasted, perfect for anyone who is unsure about game or has never thought to try rabbit before.

In addition, the prune and liquorice puree was subtle, sweet but with that characteristic liquorice flavour creeping through – working perfectly with the meaty rabbit.

Next up was an Anjou Squab (£26.00) and luckily for my ignorance, someone at the table already pointed out that it was pigeon before I had to ask and make a complete tool of myself.

French nomenclature aside, this sounded brilliant, with a ‘Bacon Butty Bread Sauce‘ literally making me smack my lips before the server had even plonked the plate down in front of me.

As a man who enjoys meat so rare that it’s preferable to have kept in a warm sauna for an hour, the pigeon was excellent. Some may not like it so rare and may scoff, but it allowed the fatty, dark meat to really hold its own alongside the aforementioned strong flavours of the bacon butty bread sauce.

As well as this reflationary combination of sauce and sandwich there was also a cheeky little Bacon ‘Frazzle’ hiding under the radicchio which, although salty, added a whole new dimension to the pigeon – bringing a welcome bacon-crunch to the proceedings.

I must also say at this point that we were also savouring some brilliant wines alongside the dishes – following Simon’s taster menu pairings. The Langmeil ‘Three Gardens’ GSM that we had with the pigeon was by far my favourite tipple of the evening.

The final main of the evening came in the form of a spectacular Assiette of Lamb (£32.00), served with a large dose of honey and lavender soft sheep’s cheese (which had been charred on top with a blow torch).

This one was my favourite of the evening, and that’s not just because I’m obsessed with lamb at the moment. The meat itself was expertly prepared and cooked, and the addition of the sweet, creamy cheese (and welcome potato puree) gave this dish a decidedly home-cooked feeling.

A clear stand-out on what is already a fantastic menu thus far.

We were finally on to the dessert and thus were treated to a Rhubarb dish which is perfect for anyone who is a fan of the long plucky garden grower.

The dish includes loads of different iterations of the fruit, including a rhubarb sorbet and shaved iced rhubarb, all presented alongside a white chocolate bowl and a rose custard.

I must admit to not really ever being a fan of rhubarb and usually staying well away from the stuff, but I managed to devour the whole thing in what could possibly be a world record time.

The sheer range of textures and flavours flying about can be quite overpowering though, especially with the rose custard, but any fan of rhubarb will love it.

Finally, we polished off the eventful evening with some brilliant Vimto & Violet Macarons – acting as a perfect bookend to the evenings earlier beetroot and goat’s curd delights.

Again, like before these were fantastic and if Simon could arrange to get a box full of them sent to the office – I’ll happily lock myself in the toilets and eat them all to myself. 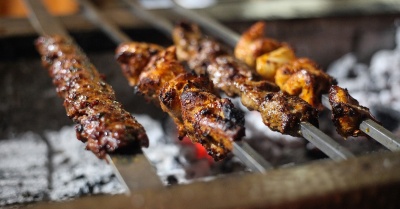 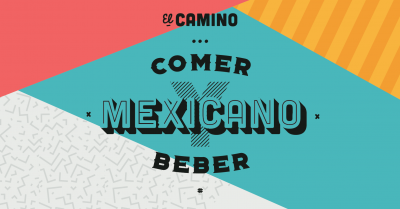