Review: Putting it Together at Hope Mill Theatre

If ever there was a show that was made to be performed at Hope Mill Theatre then this production, showcasing the musical masterpieces of Stephen Sondheim, is it.

With a plethora of songs taken from successful Sondheim shows such as Dick Tracy, Company and Follies you might be fooled into thinking that this revue show would seem disjointed but that couldn’t be further from the truth.

From the comedic opening, delivered by brilliant narrator Andrew Gallo, filtering out the crisp rustlers, mobile phone users and disgruntled Michael Ball fans – much of the action onstage is slightly tongue in cheek which is a refreshing approach to take.

Set in a New York apartment the 5 strong cast includes two couples at opposite ends of their relationships; the younger Simbi Akande and Alex Cardall caught up in the first throws of love alongside Gavin James and Lauren James Ray fighting to keep theirs alive.

Each set piece scene cleverly has a keyword which links the action, such as love, scorn and consummation, with Sondheim’s bittersweet and lyrically perfect music tying them together.

All the cast get their chance to shine throughout the show as the web of love plays out, although the stand out performance of the night belongs to Lauren James Ray who is absolutely spellbinding with each note she sings and captivating as the ‘scorned older woman’.

The wedding scene within the second act is worth the ticket price alone and credit must go to the fabulous direction of Bronagh Langan and Will Whelton’s choreography who together create a piece of musical theatre that is both cinematic and finely crafted.

Other special mentions go to Michael Webborn, the onstage Musical Director who sets the pace of the show brilliantly with his stylish piano soundtrack and mini cameo, weaving into the action with great effect and a degree of humour.

Once again Hope Mill Theatre has produced a piece of delicious musical theatre that works on every level – Mr Sondheim would certainly give this show his seal of approval as a fitting tribute to over half a century of his incredible music.

Putting it Together runs until 24th November at Hope Mill Theatre 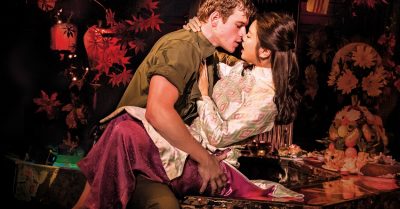