Bluedot Festival are taking over The Refuge this Easter Weekend

This Easter Bank Holiday, The Refuge have announced a jam-packed weekend of events culminating in a huge takeover by Bluedot festival on Easter Sunday in what promises to be a fantastic family-friendly twist on an outstanding programme.

On Sunday 1st April, The Refuge will be welcoming Bluedot Festival to curate the final day of their weekender with families in mind. Bluedot, hosted at the stunning location of Jodrell Bank, is the UK’s only festival of science, art and music and since its inaugural event just two years ago, has quickly become one of the most eagerly anticipated festivals of the summer.

Down in the basement, Bluedot will be hosting a range of exciting science experiments and intergalactic interactive children’s entertainment. Our Kids Social will host “I am the Eggman”, a psychedelic egg hunt for children of all ages, followed by an interactive Family Silent Disco, circus skills, arts, crafts and more.

The afternoon session will see Playhouse Project host a Family Rave, complete with soundtrack from Lil’ Fi from The Whip and special moves from the Bluedot Electron Robot who will be on hand to teach kids how to actually do the robot and rave.

Later on, Bluedot will host a ‘Sounds from Space‘ talk and Q&A led by Tim O Brien, Associate Director of Jodrell Bank Centre for Astrophysics. Finally, the evening will see Tim will head into the public bar, where he will take over the decks playing a cosmic inspired set-list, followed by Richard Norris, who works in partnership alongside Erol Alkan as the highly influential duo Beyond The Wizard’s Sleeve.

But that’s not all of course. With this being Easter Bank Holiday Weekend The Refuge will be kicking things off from Thursday 29th right through till Monday morning. Here’s what they’ve got in store…

Thursday 29th March
Long Weekend with Dr Sid
Thursday will see guests are welcome to ease themselves into the long weekend with Dr Sid Honey Cooler, a record collector of over 40 years who will take control of the public bar from 5pm until late. Taking listeners on a musical journey from the 1920s to the 50s with a soundtrack of blues, swing, big band, original R&B, mambo, calypso and various oddities that are impossible to categorise.

As a special treat for the passing seasoned digger, or merely the curious collector, there will be a one-off Charity Shop Stall run by charity 10,000HRS with all records priced at £1. Not your usual charity haul, this will be a selection of records kindly donated from esteemed selectors such as Mr Scruff, Unabombers, DJ Paulette, Krysko, Justin Robertson, Jason Boardman, James Holroyd and many more, with all proceeds going to the charity. The FREE Evening Social in the basement will be hosted by Hi-Tackle featuring Ruf Dug, Randy Brunson and friends.

Saturday 31st March
Yoga, Art & A Love From Outerspace
Saturday will kick things off on Waterhouse Way with an All Strala Yoga Class, hosted by the talented Lisa Stannard. The Den will then be host to ‘Overdrawn’ – an interactive drawing social featuring local artists, art battles, auctions, a pop-up shop and more.

Saturday night will be a ticketed all night long takeover from A LOVE FROM OUTERSPACE, with Andrew Weatherall and Sean Johnson, who are back again following a stellar gig in 2017. Over the last two years, The Refuge has built a fine reputation of carefully thought out collaborations when it comes to these special events, and this weekend is no exception. 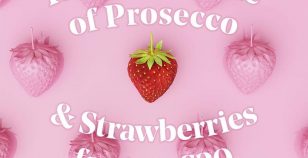 Prosecco & Strawberries for 2 for £20 at Brasserie Abode