Celebrated for their unique take on classic texts, the Lyric Hammersmith and Filter Theatre Productions bring to The Royal Exchange Theatre a deconstruction of A Midsummer Night’s Dream that will leave you gobsmacked.

All I could think to say as I walked out of the theatre on Monday night was “Well I didn’t expect that!” Never before have I wanted to review something so much, by saying so little. The main reason being that the surprise element this play throws at you – along with bags of glitter, dry ice and barm cakes – really is half the thrill!

Following on from their success at the Latitude festival and ‘Bare Bones’ tour, the collaborative duo were invited to conclude the Royal Exchange’s summer season and they are doing so with video game guns blazing. It is nothing new for a director to engage audiences by locating a play in a more modern context, but the Lyric’s Sean Holmes, and Filter’s Tom Haines take this one super-hero leap further.

This play within a play – where warring fairies make sport of young lovers’ affections –  requires you to suspend belief one more level as we are introduced to ‘Director’ Peter Quince and his musician friends Chris and Alan. The play begins with some very 21st century stand-up as the barely understandable Irish ‘Director’ hurls a babbling rampage at the audience, leaving them breathless before the play, we all know, has even begun.

Even when it does there are no theatrical comfort zones allowed. In an absolute cultural grab-bag of delights the audience is presented with a panting and gothic Titania, alongside a lycra-clad, 50s nerd of a super-hero Oberon; all thick rimmed glasses, cod piece and bum bag! Puck is a can of Fosters wielding, tattooed stagehand, and I won’t even tell you about Bottom!

Helena and Hermia are two very different visions of female sexuality, as are Demetrius and Lysander, the latter in parts driven by such an extreme sleaze-fuelled ecstasy as to spend an entire song writhing around the drummer.

Did I say song? Oh yes! This is Shakespeare done Sex and Spells and Rock and Roll style.

At one point, as a Do-wop/Hendrix hybrid of a song was wailed out by a paint splattered and sexually charged cast, people could do nothing but stare in delightful shock.

It is not surprising that a few purist feathers will be ruffled by this production, with wise cracks such as “Enter Bottom isn’t a line” straying far from the original script, though almost definitely not the original sentiment. However, as Sean Holmes himself says “We’re respectfully disrespectful”. For those die-hards among you – be prepared. For the rest of you, sit, relax and enjoy what is a fantastic piece of truly innovative theatre. 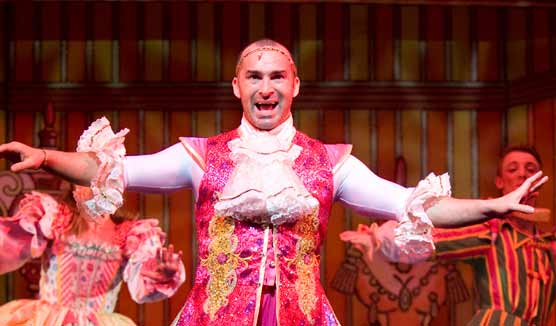