Today Contact, Manchester’s critically acclaimed, trail-blazing theatre and arts venue, led and programmed by young people, launched the final phase of its Capital Redevelopment fundraising campaign, with a target of 500k, after raising over £6m of its £6.65m target.

Front and centre of the campaign is Con:Struct, the dedicated team of young people aged 13-30 leading the project to transform the building for the next generation of audiences, artists and young people. They revealed the plans for the building, which is looking to reopen in Summer 2019, along with a new film to introduce Contact to a wider audience.

The funds will complete the Contact redevelopment, supporting new and improved performance spaces; a purpose-built recording studio for young people’s music projects; an arts and health development space; new offices for artists and cultural organisations to hire and work alongside Contact staff and a new café/bar.

The Con:Struct team have attended more than 50 meetings and sessions since June 2016, initially having appointed lead architects Sheppard Robson. Since then they have been involved in procuring F Parkinson Ltd as the official contractors, who broke ground in late March 2018; interviewing and appointing the caterers; consulting on its fundraising policy; interior design choices and signage strategy.

First established in 1972, Contact last underwent a major building redevelopment in 1999 with a ground-breaking new environmentally sustainable design. Twenty years on, the building needs to expand in order to cope with the growing demand from young participants and audiences as well as further improving Contact’s economic and environmental sustainability.

A new arts and health space has been funded by a Wellcome Trust grant of £500,000. This will provide a dedicated space to develop new partnerships and relationships with NHS, patient groups, young people, local communities and artists. Additional funding will support a three-year post of Health Producer to lead on projects and produce new theatre shows that explore health inequalities and other current issues.

Support from trusts and foundations follows initial grants from Arts Council England and Manchester City Council. In addition, Contact has received in kind support and with Contact’s own funds and individual donations this brings the total secured to date to £6,161,133.

The Capital Redevelopment has been the catalyst for Contact, and its outstanding, nationally recognised and consistently diverse performances, from contemporary theatre to dance, live art, cabaret, spoken word, circus, comedy and music to explode out into the City of Manchester, reaching exciting new audiences.

Contact has gained powerful momentum with diverse productions such as Dancing Bear, She Bangs the Drums and Handlooms hitting new stages from the Palace Theatre, to the Museum of Science and Industry and a sari shop on Manchester’s famous Curry Mile, receiving critical acclaim across the board.

Contact is also expanding onto new platforms with a television co-production from Contact and 20 Stories High based on their hit theatre show ‘I told my mum I was going on an R.E. trip…’ broadcast on BBC Two in January to huge critical acclaim, reaching viewers nationally both on and offline. The frank, warm verbatim drama about young people’s experiences of abortion will screen again at Manchester HOME cinema in May 2018 as part of Pilot Light TV Festival.

Ella Dix-Nagra, Con:Struct member said: “Contact is incredibly important for young people; it is diverse, warm and welcoming, and the knowledge and platform it has offered me kick-started a full time career in the arts. Now we need everyone’s help, whether they can offer donations or their voices to support the amazing we work we need to continue.”

“I already miss Contact but I am so excited about next summer when we can see all our ideas and hard work brought to life. It’s an incredible legacy to have been a part of at just 24 and an opportunity I couldn’t have even imagined.”

Matt Fenton, Chief Executive and Artistic Director at Contact said: “We are incredibly grateful for the generous support we have received so far to get this project up and running, with our contractors now on site. To have raised over £6 million in the last 18 months is testament to how much people value what Contact does with and for the young people of Greater Manchester, the kinds of radical new performance we produce with them, and the many communities we reach. However, our challenge now is to raise the final £500,000 to finish the job, and to do that we need people who care about what we do to support our campaign now.”

Julie Hesmondhalgh, Contact advocate, said: “I know more lives transformed because of Contact than I can count. Some of the most prolific artists I’ve met started out at Contact. Contact has always championed young people, and were years ahead of everyone in promoting diversity. I’m delighted to support this new era in Contact’s life in our glorious city, bringing that wonderful building bang up to date to host the next generation of exciting, vital, diverse and ground-breaking work.” 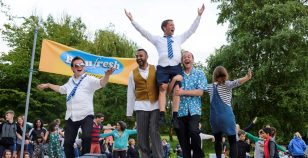 Billionaire Boy & The Taming of the Shrew: Live Outdoor Theatre in…