Halloween might be over, and Christmas might be approaching at a rate of knots, but there is always room for a little horror among the detritus of Christmas carols and tinsel.

This week, I’m going to be looking into the terrifying tales of the Oldham Coliseum – a place teeming with stories of death, superstition and even a ghostly cowboy of all things.

Built in the 1890’s this theatre has been in and out of use for well over 100 years. The space is brimming with history, and the stage has seen the likes of Charlie Chaplin, Ralph Fiennes and Dame Thora Hird among a few more spectral visitors.

I didn’t really think about it this way until now, but theatres, more accurately empty theatres, are pretty darn spooky in their very nature. There is something really unsettling about places that are void of people, empty and dark when they are built to be bustling with life – and this is certainly one of them.

Not only is the physical space eerie- theatres are loaded with superstition. From ‘break a leg’ to banning peacock feathers to the reluctance to light a trio of candles, it is safe to say that magic of the paranormal, folklore and the occult is alive and well at the theatre.

The most famous theatre superstition is the curse of ‘The Scottish Play’- which is something that haunts the Oldham Coliseum to this day. I am, of course, talking about Macbeth by William Shakespeare which holds one of the most enduring superstitions of all time.

Four hundred years since Shakespeare scratched the words with this quill, actors rehearsing and performing the play refrain from using the M-word at any time. Why? Because it is notorious for causing bad luck, catastrophe and even death.

The play was even banned by superstitious and witch-phobic King James I on account on the play’s relentless injury and death rate. On stage, accidents range from trips and falls, to fighting injuries to randomly falling stage weights – all because some prick chose to utter the M-word.

It is said the play is cursed because Shakespeare stole real spells from real witches to put in the script:

Round about the cauldron go;
In the poison’d entrails throw.
Toad, that under cold stone
Days and nights has thirty-one
Swelter’d venom sleeping got,
Boil thou first i’ the charmed pot

Appropriately pissed off, the coven of witches put a curse on the play to cause harm and death wherever possible – and it was made possible at the Oldham Coliseum one fateful night.

In 1947, Harold Norman started rehearsals for his leading role in the Scottish Play at Oldham Coliseum. Much to the disdain of his fellow actors, Norman ignored the warnings and instead practised his lines and used the M-word liberally.

Norman was foolish to not take the curse seriously. During a rehearsal, he was accidentally stabbed with a sword during a fight scene by a fellow cast member in some twist of fate and he died later in hospital from an infection.

It is said that his kilt wearing spirit still haunts the theatre. Norman is said to make the majority of his appearances on Thursdays – which I believe is the day of the week he was injured.

Some staff members have seen shadows and orbs on the stage late at night. Chairs have been said to move and strange moans and groans echo across the empty theatre. Some people even say they have heard the word ‘Macbeth’ whispered in their ear.

More acute activity includes people feeling like they are brushing past someone only to see dark spectres melting into walls when they turn round to apologise. Actors have sensed a strong malevolent presence under the stage – which causes symptoms like uncontrollable crying and difficulty breathing as if tightening hands were wrapped around their neck.

Terrifying stuff. Looks like those witches are still getting their revenge after all.

On a lighter note, other ghosts haunting the Oldham Coliseum include various cowboys, red Indians and horses said to be cast members from the travelling Buffalo Bill’s Wild West Show which was of ever-increasing fame at the turn of the century.

People have heard an enormous ruckus running through the theatre in the form of horses neighing, guns firing and people shouting – only to discover the theatre deadly silent once they peek their heads around the door to check.

Honestly, I would take a troop of cowboys wreaking havoc in the theatre over than the cursed spirit of Harold Norman any day. But it does make me wonder how the two coexist under the same roof – that is if they exist at all. 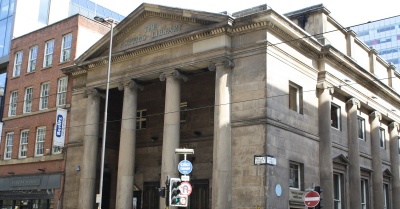