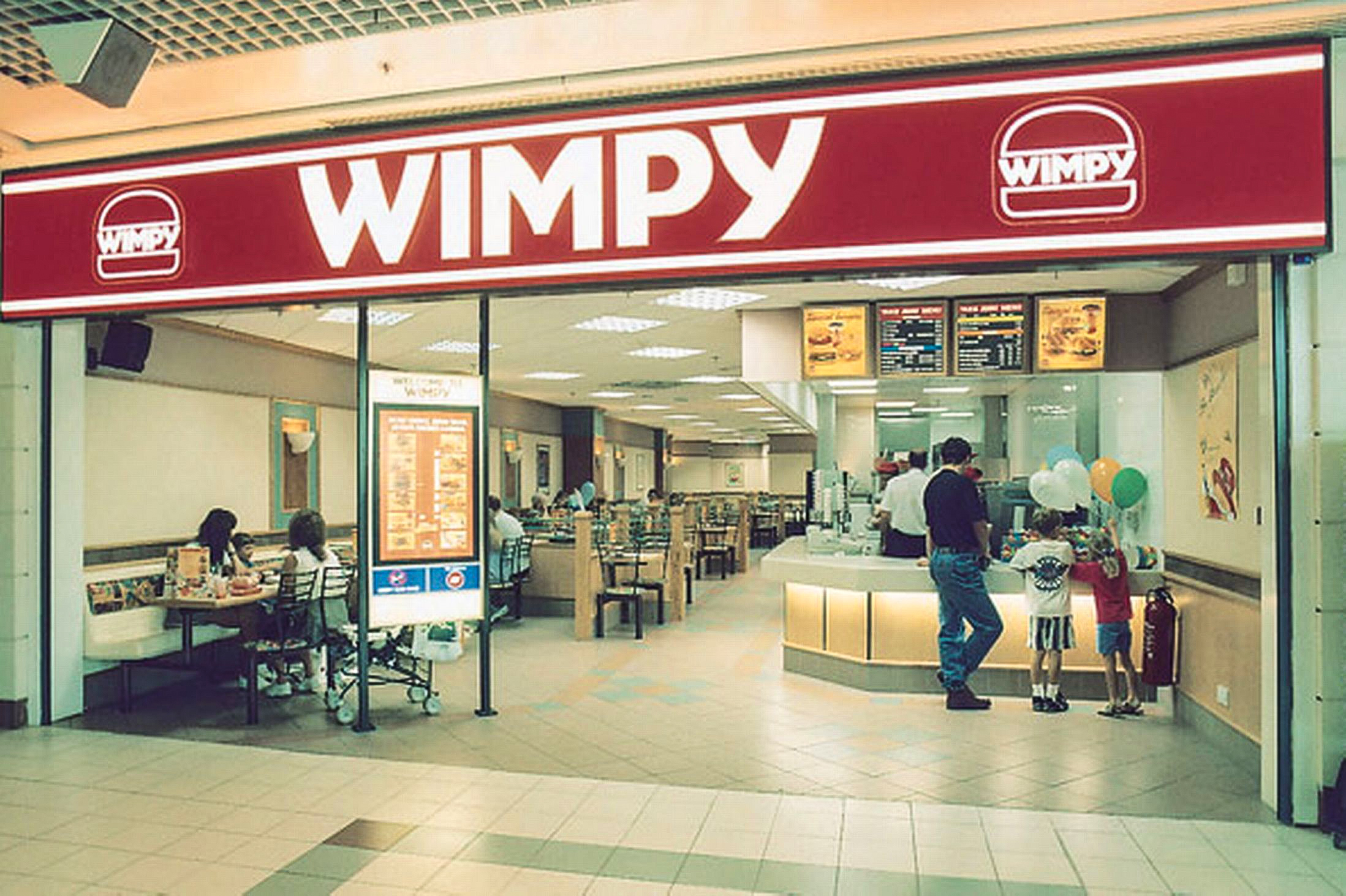 I feel that I must make this statement before we go anywhere; a lot of people reading this won’t have a clue what ‘Wimpy‘ is. It’s the sad fact of physics that time waits for nobody – and so Wimpy has pretty much disappeared from both our high streets and our collective memories forever.

Just like those S Club 7 lot – I’ve decided to bring it all back to you now – with a look at Manchester’s introduction to the phenomenon that was Wimpy; how it became a household name and just why most people have never heard of it any more.

To be fair to Wimpy though, literally hundreds of high street brands and shops have come and gone over the last 50 years. Remember Woolworths? How about All:sports? Zavvi? C&A? Tammy Girl? Tandy? The list could go on for ages – but I’ll stop – because most of them were actually rather shite – but Wimpy? Let’s see… 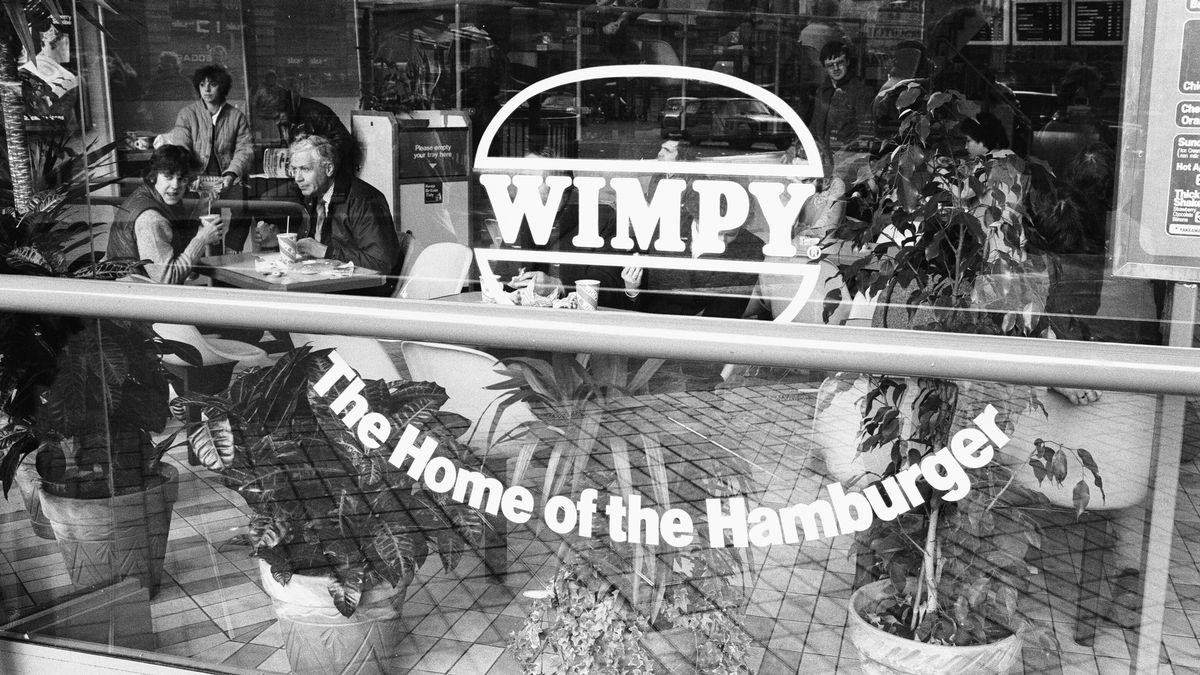 Wimpy was the UK’s first ever foray into what we now know as “fast food”, a revelation in restaurants that appeared long before Maccies and decades before Colonel Sanders started frying chicken on our streets and in our shopping centres.

The first “Wimpy Bar” popped up in London back in 1954, a branch of restaurant that was established by a fella named Edward Gold 20 years earlier in Indiana in the United States. Inspired by that character that’s always eating hamburgers in Popeye (J. Wellington Wimpy) – it wasn’t long before “Wimpy Grill” was a chain across the whole of the States. 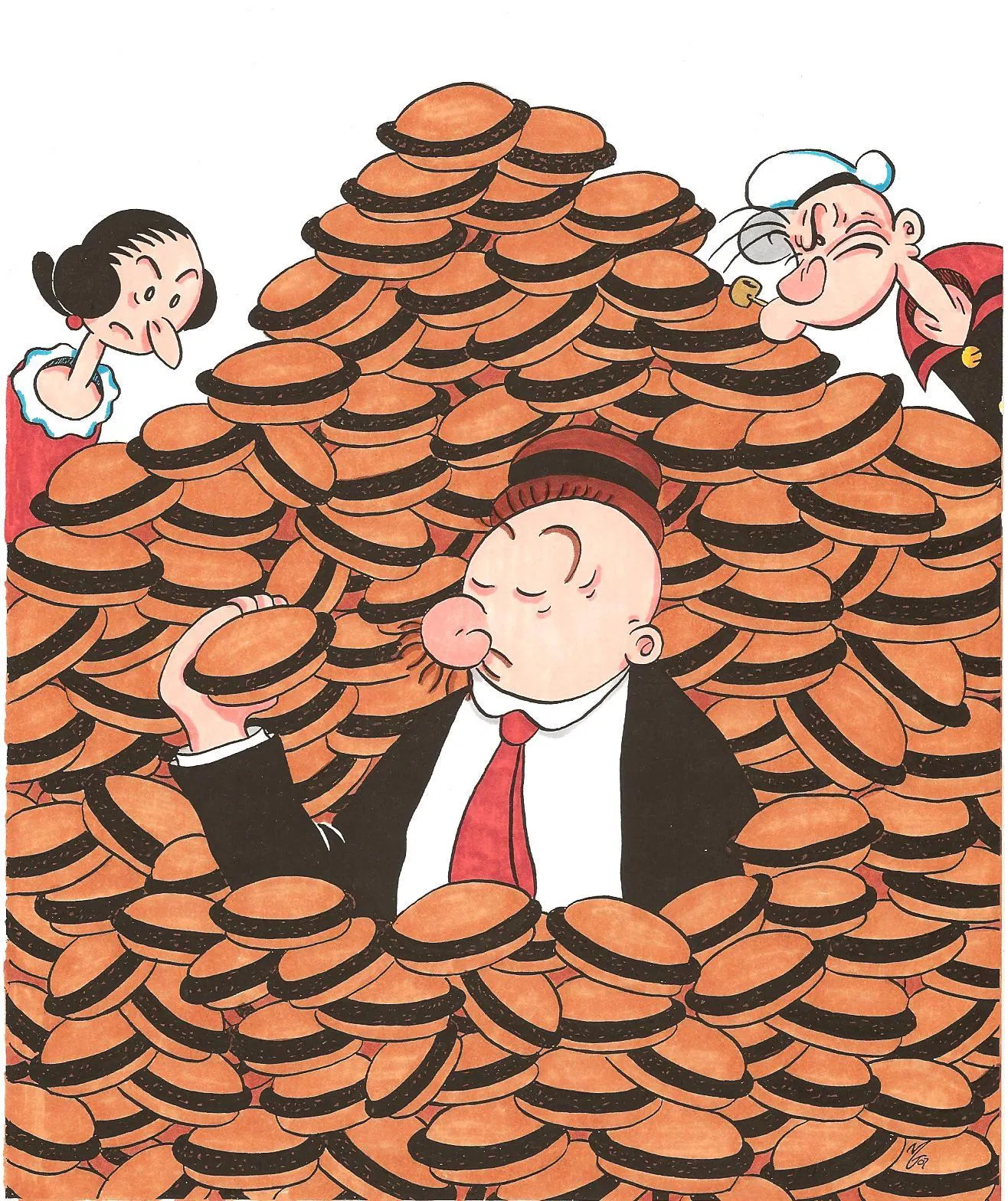 It was a revelation when it arrived in the UK back in the 50s – part of the continued influence of American culture on the British – especially amongst the young.

The food was “served at the table within ten minutes of ordering and with atomic age efficiency. No cutlery needed or given. Drinks served in a bottle with a straw. Condiments in pre-packaged single serving packets.” 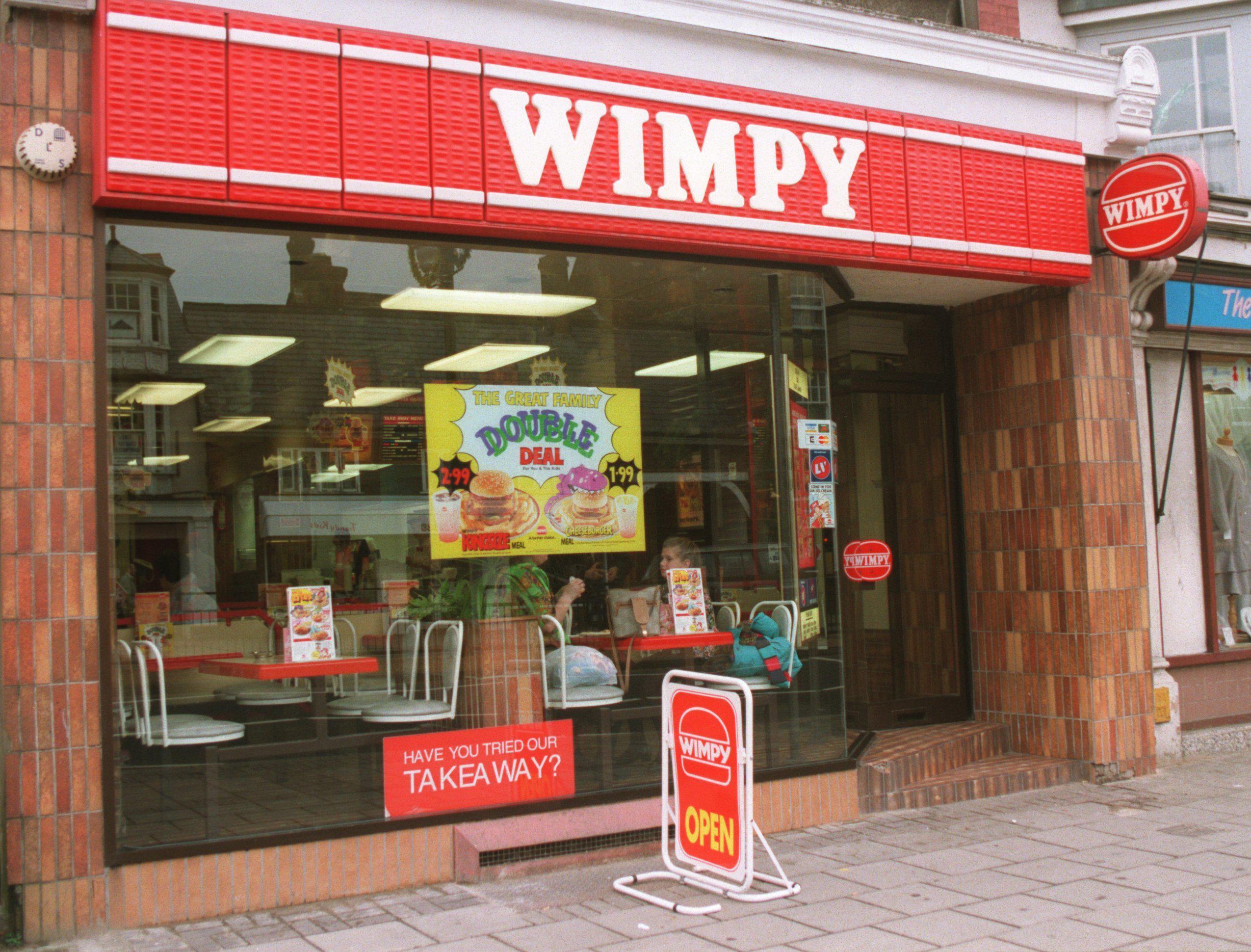 All this sounds very familiar to us, but back in the 50s this was certainly something most people had never seen before. Serving up a range of hamburgers and shakes, Wimpy was also famous for its ham rolls (which were called ‘Torpedoes) and their cold frankfurter with picked cucumber sandwiches called ‘Freddies’.

By the time the 70s rolled around, Wimpy was in the throngs of its heyday – enjoying success throughout the world with over 1000 restaurants in 23 countries. It was thriving in the UK too, and it’s around the early 70s when Manchester got its first-ever Wimpy at the brand-new Piccadilly Plaza complex in Piccadilly Gardens. 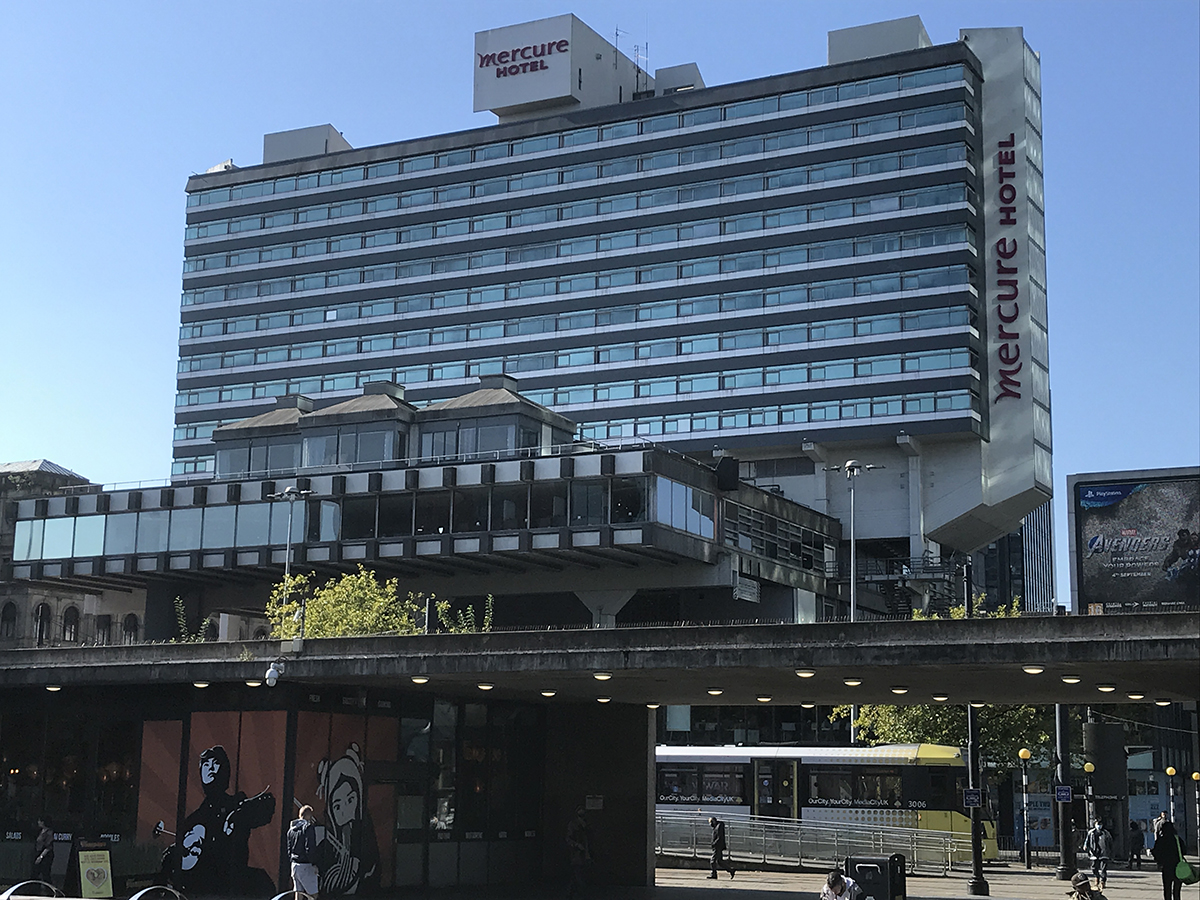 After extensive bomb damage from the Luftwaffe in the Second World War, half of Piccadilly Gardens, the bit next to the bus depot, was just empty – basically being used as a car park for many years after the war. It was in 1965 when plans for a state-of-the-art ‘Plaza’ were drawn up – complete with modern offices, a hotel and lots of space for new and exciting shops, restaurants and pubs.

We all know what happened – it became City Tower, the Mercure Hotel and that weird Conference Building at the end which houses a Law School nowadays I believe. A Brutalist dream – the plaza certainly divides opinions still today, but at the time – people loved it.

You could find some truly wonderful places down there such as the legendary greasy spoon – Golden Egg, Portland Bars, Piccadilly Radio, Bata Shoes and of course – Wimpy. 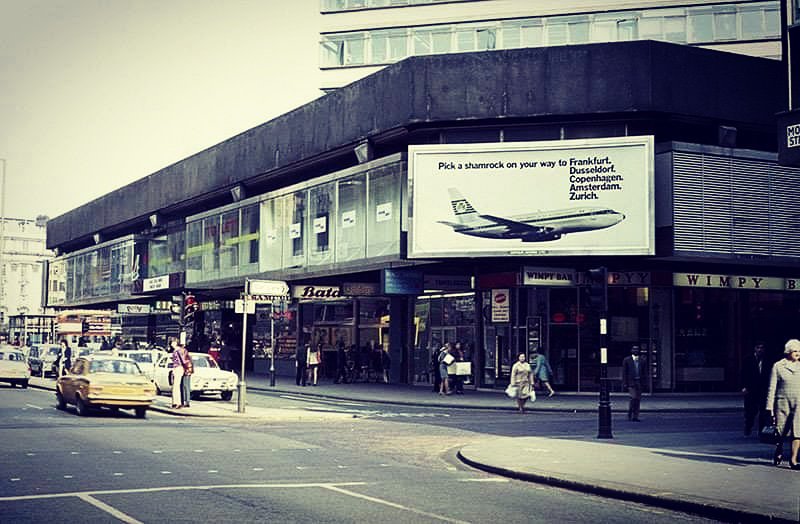 You can see Wimpy on the corner here

There was also a Wimpy over on Oxford Road, underneath the Dancehouse, and there are rumblings of a Wimpy where Burger King is now on Piccadilly Gardens but I think people have just gotten confused with the Piccadilly Plaza one.

There was also certainly a Wimpy in Salford Precinct – I know this because I went in there about 10 years ago – hungover after a walk around the market.

One rather famous (and damning) footnote in the history of Wimpy in the UK is that the restaurants refused entry to women on their own after midnight – purely on the assumption that they might be prostitutes.

By the 80s Wimpy was still going strong here in the UK, despite strong competition from the newer and bigger US competitors – most noticeably Maccies and Burger King. It’s around this point when I was exposed to the world of Wimpy – primarily during the seemingly endless birthday parties in the Oldham one when I was about 5.

I vividly remember playing ‘hokey cokey’ with all of my school friends with a bloke who was dressed up in a HUGE Beefeater costume – which I’ve only just realised was the Wimpy mascot for a spell and not just some fella who needed to make a last-minute dash to the fancy dress shop because he forgot his clown nose. 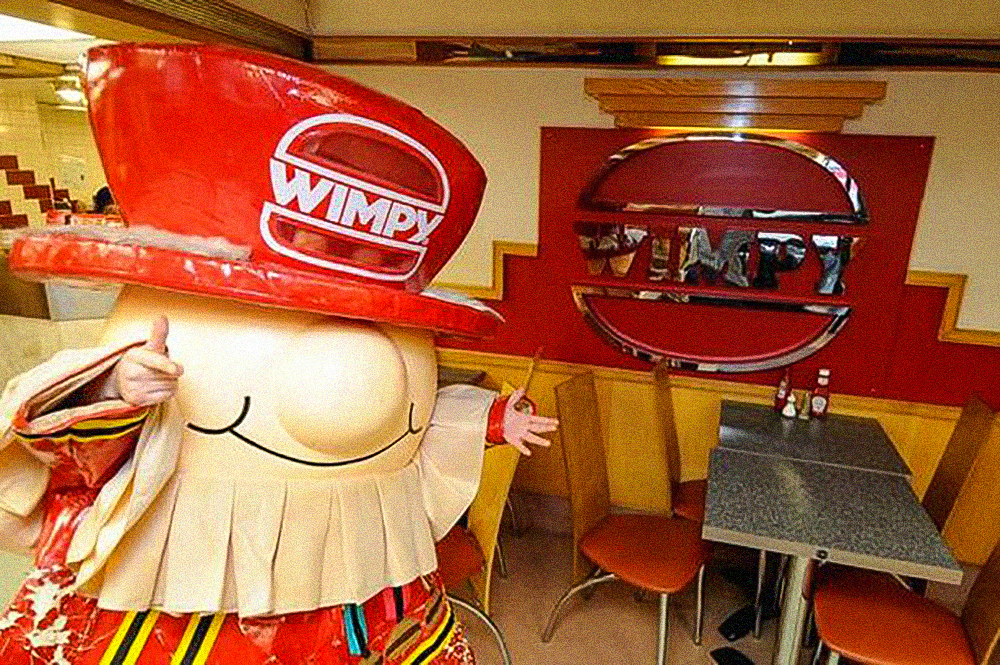 I also remember that the burgers were served to you on ACTUAL plates and you used REAL cutlery to eat it all – something which was highly unusual by this point after a few visits to Maccies down the road.

I also remember that Wimpy was always full of old people – who seemingly loved the food there – and this seems to be something that continued well into the 90s and 00s – with Wimpy pretty much disappearing altogether from the streets of the UK – except for run-down seaside towns like Clacton-On-Sea and parts of Essex.

It was actually in one of these Essex branches back in 2014 when Wimpy hit the headlines for the first time in about 15 years, as A-lister Brad Pitt popped in for a Wimpy Cheeseburger whilst filming ‘World War Z’ in the area. 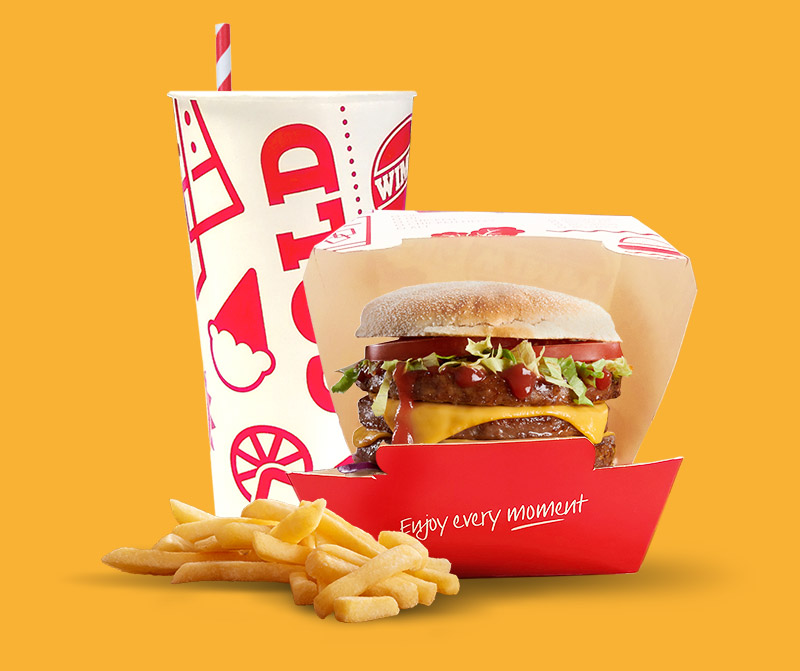 He’s a massive fan apparently, but by this point there were only 93 Wimpy restaurants still in the country, and that number has dwindled to a modest 72 today. The closest Wimpy to Manchester is the one in Huddersfield – so if you want to give it a try and see what all the fuss is about – head there.

The menu in Wimpy has always been based around burgers and chips – that sort of thing – but nowadays there are some truly mad and wonderful creations on there that are just begging to be tried. 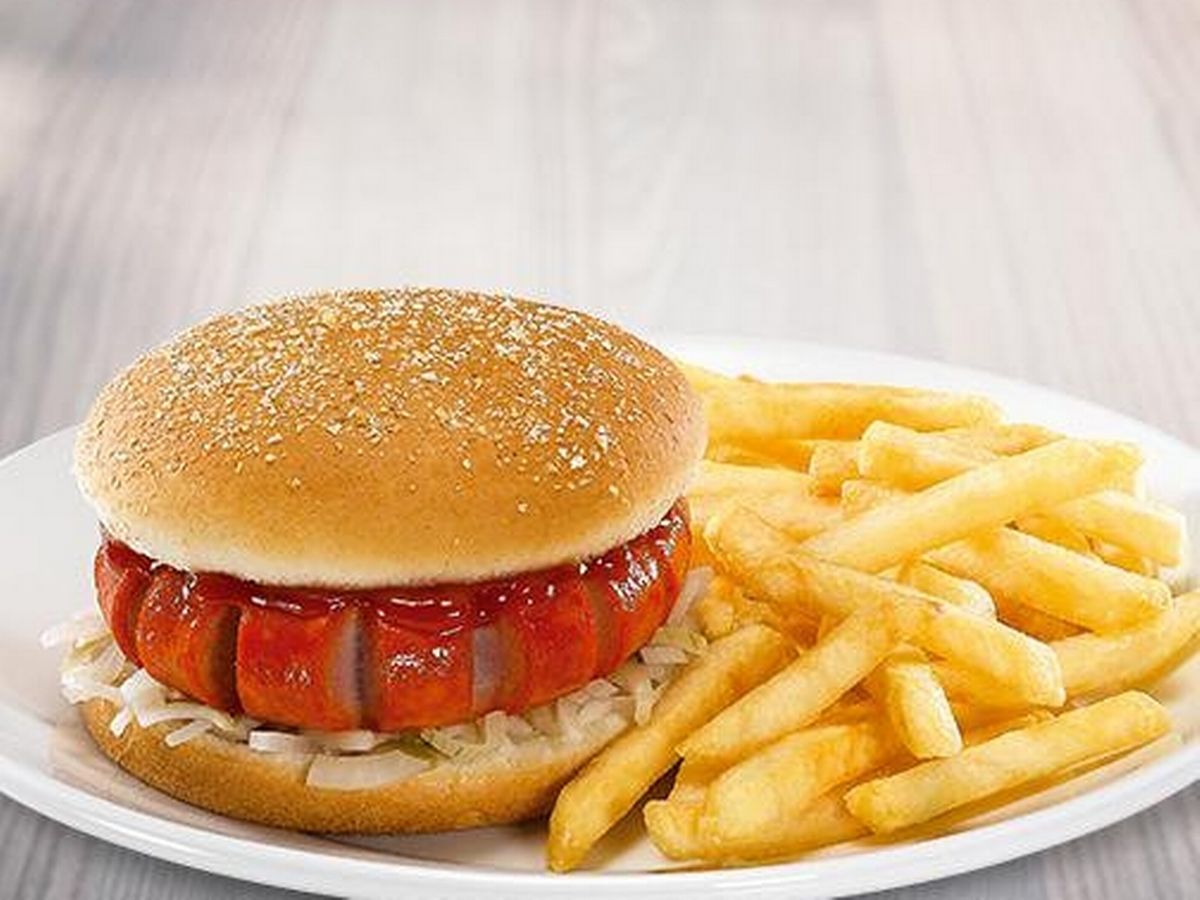 Bender in a Bun

Alongside their Classic Quarter Pounders you’ll find their ‘Bender in a Bun’ which is a cut-up sausage butty, The Wimpy Grill (a pork bender, a Wimpy burger, a free range fried egg, chips & tomato) and even a rather impressive Breakfast selection.

I’ve not been since my visit to the one in Salford Precinct back in 2009, so I can’t tell you whether it’s still any good or not.

There was a time when this was the height of American food sophistication in the city, so if you think of yourself as a ‘foodie’ – then a visit to Wimpy is a MUST – before they’re gone for good.