Some people love them, some people hate them. These are basically the Marmite of buildings...

University Place
When I was at University the dreaded Mathematics Tower (image below) was being demolished and replaced. My little mind would wander, thinking of all the fantastical things that they could do with the space – creating a building that us students could be proud of and somewhere we’d actually want to study away from the concrete monstrosities surrounding it. Well, imagine my disappointment when they started laying those pastel coloured bricks and the metal went down on what is now commonly referred to as the ‘Tin of Beans’

It must be said though, on the inside the building looks fantastic, with three huge atriums, two lecture theatres, classrooms and the brilliant new (ish) Food Market that serves up a wide range of dishes from many of the city’s independent food retailers. The ‘tin of beans’ might be a bit of an eye sore but it’s certainly not the only one that the universities of Manchester have imposed upon the city… 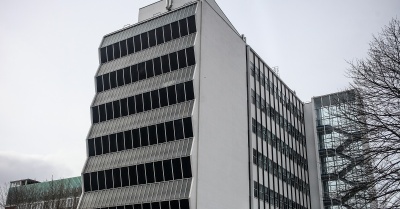 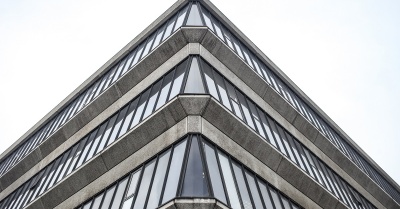 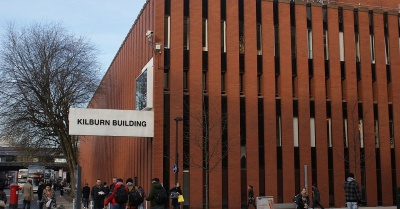 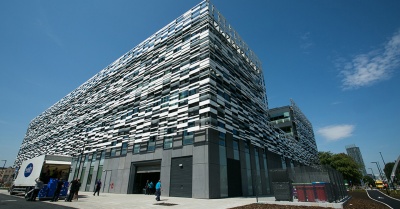 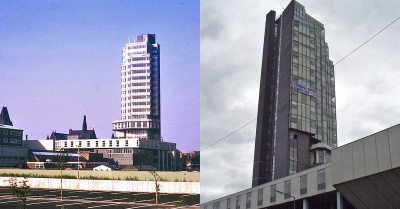 Arndale Tower
Pretty much universally hated as soon as it was finished (which is 50 years ago this year!), the main issue with the Arndale Tower (and the rest of it before it got torn down) is those horrible yellow ceramic tiles. They were described at the time as being “bile yellow” and “vomit coloured” and if we’re being honest the last 50 years haven’t really diminished their impact much.

The tower itself is rather inoffensive away from the tiles, just being a pretty bog-standard office block. But this hasn’t stopped many critics blasting it over the years though. Designed by J.L. Womersly and Hugh Wilson, this Modernist delight is the likely cause behind them feeling to country to live in Mongolia ever since.

One Piccadilly Gardens
Slap-bang in the middle of Piccadilly Gardens, one would think that there are almost too many eye sores around there to really stand out, but One Piccadilly Gardens has managed to carve itself a nice little slice of hate all on its own. It’s nowhere near as bad as the horrible concrete wall, but many people see this office block as a serious missed opportunity in terms of brightening up the area.

The whole thing came about because around 25 years ago the owners of Piccadilly Plaza were annoyed that the gardens had become a haven for pissed up, drugged up idiots and thus put intense pressure on the council to clean the whole area up. Well, that went well didn’t it! To fund the regeneration, the council sold a big part of the original gardens to developers to create One Piccadilly and create a new, improved Gardens. Good one guys!

Beetham Tower
Another development that’s divided opinion for years, Ian Simpson’s Beetham Tower has taken a lot of flak since becoming the city’s tallest building when it was completed in 2006. Sure, there are plenty of things to hate; there’s the seemingly TOO large ‘fin’ at the top, there’s the jutting step halfway up, there’s the obscure and frankly baffling windows and of course – that whistling when it’s windy.

On the other hand, the building certainly IS striking, and that’s something that us Mancunians are always asking for isn’t it? We didn’t want our tallest building to be some boring glass fronted yawn-a-thon and we definitely didn’t get it. Personally I like it and now that its crown as tallest has been trumped down at Deansgate Square – I’m a little sadder inside.

North Tower
Okay so all you keyboard warriors out there will be like “It’s actually in Salford NOT Manchester!” Well, go back to your Findus Crispy Pancakes – I don’t care. We can still see this lanky concrete monstrosity from our side of the river so we’re still entitled to have a good old moan about it. Well, the people who don’t like it will anyway.

A fantastic example of Modernist architecture, this 60’s high-rise was once home to the dreaded Inland Revenue but is now half residential and half Premier Inn. Notable features include bus-like windows, strange protruding port-holes and of course the large blue block that extends the whole way up the length of the building. Some people like it – I’m on the fence – it’s certainly not the worst looking building in Salford by a long shot.

Mercure Hotel
Another Piccadilly Gardens gem, I’ve always been amazed at just how BRUTAL the Mercure Hotel is (as well as the adjoining City Tower of course). It’s a 1960’s monstrosity with a long angular glass-fronted tower, complete with ‘wings’, resting atop a wide, flat base that houses offices, conference rooms and all the other things you’d expect from a modern hotel.

Whether you absolutely love it or absolutely hate it, this is one of those buildings that has come to define Piccadilly Gardens over the last 40 years. If we’re being nice about it all, a quick look online and it actually looks to be really rather nice inside after a fair whack of cash was spent on doing it up a couple of years back. It’s certainly much better than The Britannia Hotel opposite, which may look ‘better’ from the outside but is a mucky stain on Manchester in terms of quality inside.

Petersfield House
An easy building to miss, Petersfield House is that rather dilapidated looking building sandwiched between the stunning Albert Hall and the slightly less impressive Freetrade Exchange. The front facade is a mixture of expertly stained concrete sections interspersed with windows that look like they were bought when glass was considered too expensive to buy in sheets bigger than an A4 sheet of paper.

Surrounded by some of Manchester’s most beautiful buildings, the architects of Petersfield House were clearly fighting a losing battle from the start, a task that would be impossible without a 500-strong team of stonemasons and more money than Scrooge McDuck. There is a couple of saving graces though – the ground floor is home to Rudy’s and Brew Dog – two outstanding venues that manage to distract you from what’s above.

Toast Rack
I didn’t include the ‘Toast Rack’ in the University section of this article because I wanted to have a proper talk about it. Basically I used to live on Old Hall Lane just down the road from it and thus I saw it more than once a day – and I love it. Truly a building that defines the word ‘polarising’ there are clearly just as many people out there who hate it just as much as I love it.

They’d be more than happy to let it crumble into nothing, but I for one think it should be preserved and turned into something great. What that is though – I haven’t a clue. It’s recently been used as a gym for some reason but there must be a better use for it. It’s also Grade II listed so it may be pretty difficult to do much with it. Any suggestions?