The city’s oldest surviving music venue, The Ritz has taken many forms through the years, much like David Bowie - constantly reinventing itself to stay current.

But unlike David Bowie, The Ritz is still going strong, which surely comes as a pleasant surprise to anyone witnessing the desolation and demolition of many of the city’s old iconic buildings and spaces in recent years. 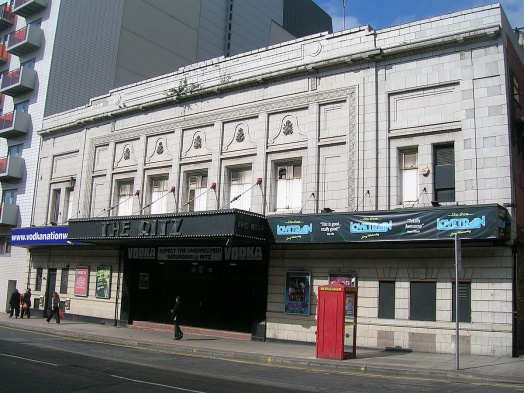 No, The Ritz is doing some belting business at the moment and even benefitted from a much-needed refurb in 2011, as 2 for £10 DVD peddlers HMV injected some serious cash into scraping up the old, crusty carpet and adding a few A+ efficient fridges behind the bars.

The place is now owned by the mobile phone lot O2, who also own the Apollo and Victoria Warehouse, and they’re still managing to get some pretty decent acts to perform there, as well as many regular club nights like the legendary Ultimate Power, Federation and the occasional goth/emo celebratory evening. 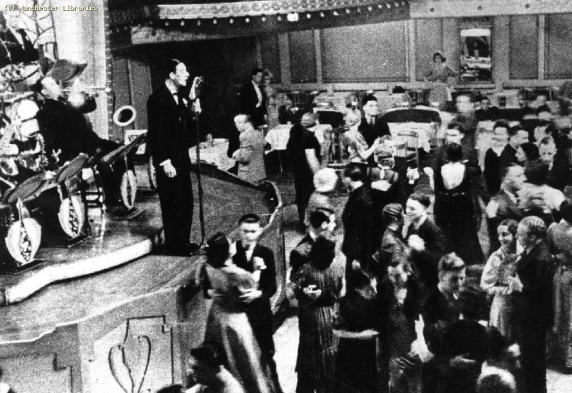 To get to the beginning of the building’s story though you need to go all the way back to the roaring 20’s, when it opened as a dance hall – the perfect place where lonely singletons could learn the quickstep, shuffle around in a suit and a top hat and try to woo the odd girl into a dance and a quick fumble in the bushes on the way home.

The one thing that made The Ritz legendary, (and still does) is the brilliant sprung dancefloor, a floor that seemingly has a bounce to booze ratio of 2:1. The more you drink, the bouncier it gets, so much so in fact that you begin to develop ‘sea legs’ if you stay on it too long and you’ll find yourself stumbling and falling as you walk to the bar to buy some more bottles of Blue WKD. 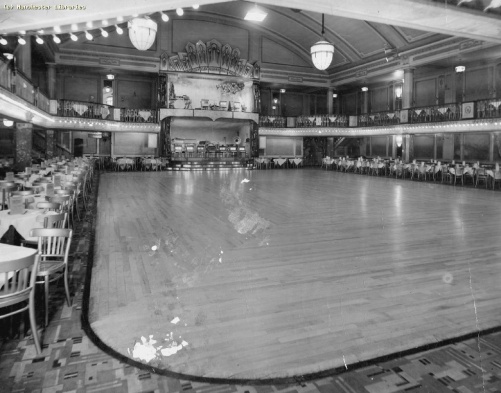 The floor was perfect for dancing, and for many decades it was frequented by top-class dancers and professionals, with many people seeing The Ritz as the jewel in Manchester’s dancehall crown – a place where you’d have to practice your steps with your mum at your local working man’s club first, just so you didn’t look like a knob when you took the plunge at The Ritz.

By around the 60’s the Ritz was owned by Mecca, the leading dancehall operators in the country, who also owned the Plaza just around the corner, which was famously managed by vile white-haired goon Jimmy Saville. He’d use The Plaza as his own personal talisman for picking up women and he was known to frequent The Ritz on many occasions with his gangster pals. 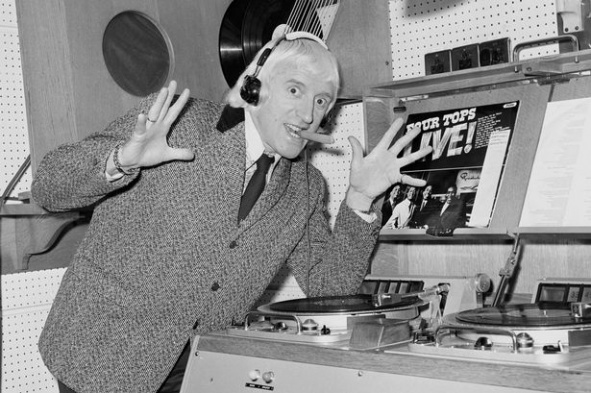 There are many accounts that claim that Saville managed The Ritz too, but I’ve yet to find some solid evidence that this was the case. But it is true that the horrible slug used to claim that he invented disco at The Ritz, and became the world’s first DJ when he got two turntables, welded them together and started playing some American soul.

It seems highly unlikely that this is true, mainly due to the fact that Saville was full of shit, but the story acts as a key turning point in the building’s significant shift from dancehall to nightclub. 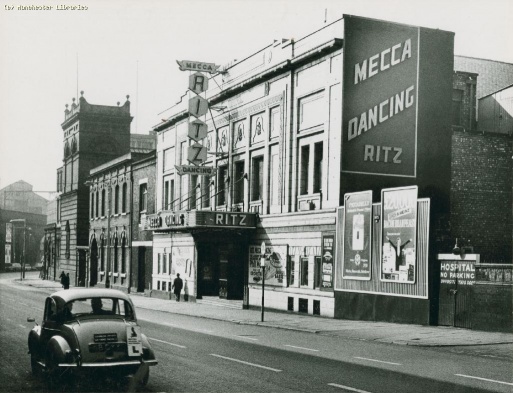 The 70’s and 80’s saw The Ritz shift more towards the music end of the spectrum, with the venue being integral in bringing many of the city’s biggest movements together with their legendary ‘All-Dayer’ parties.

The city was ripe with pockets of Northern Soul and Jazz-Funk movements, and the late 70’s/early 80’s saw the likes of Colin Curtis and Greg Wilson bring Jazz-Funk and Electro nights to the venue, playing Sunday all-day parties which would bring people from all over the region to The Ritz to dance away and listen to some seriously rare tracks.

As the excesses of the 80’s continued, The Ritz became a little overshadowed by a small club just further down Whitworth Street called the Hacienda, and as the whole Madchester scene grew, The Ritz entered a kind of purgatory – a place that became known for its Saturday ‘Grab a Granny’ nights.

The 90’s saw The Ritz pull in some huge numbers of students and alternative music fans throughout the week however, in particular on Monday’s and Wednesday’s. Monday nights’ ‘Dirty Stop Out‘ was brilliant for rock and alternative music and is well remembered for when the DJ would play the Dambusters theme tune at the very end of the night and everyone would run in a circle on the dancefloor, arms outstretched pretending to be Spitfires.

Wednesday nights, on the other hand, became the legendary Brutus Gold’s Love Train – a 70’s disco complete with sexy stage performers, dance competitions and shit loads of chest hair. This was one of my most favourite nights as a student, and the night was still going strong until around 2007, with roving gangs of pissed up students and fancy dressed Mancs heading there week-in-week-out to try and get on stage and show off.

Many a messy night was had here, wandering around the cavernous basement space looking for the toilets, getting stuck on the disgusting carpet, eating a portion of 8-times fried chips from behind the bar and downing £1 bottles of Stella with a woman from Wigan. 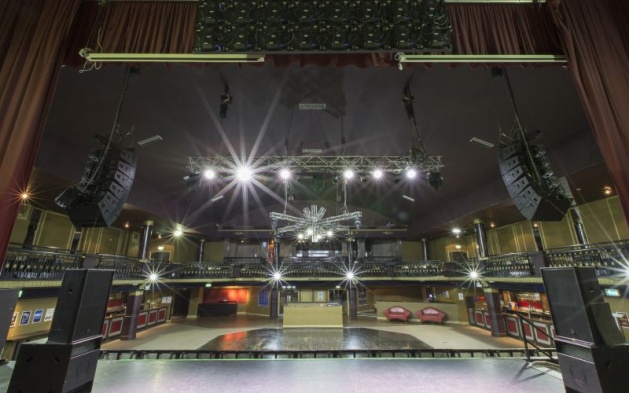 By the late noughties though The Ritz was struggling a bit, overtaken by some flashier and more impressive venues elsewhere in the city. By this point, there were some really weird nights going on, including a Saturday student night with a purposefully controversial name like  ‘Fuck’ or ‘Fanny’ or something. They’d bring out the foam machine and bouncy castles and anything else they could fit in there just to entice the crowds in.

By 2010 the place shut down and lay unused for around 6 months until HMV bought it and threw a cool 2 million sheets at the place. Gone was the sticky carpet and the cavernous basement space as it was reinvented as a primarily live music venue, which it continues with to this very day. 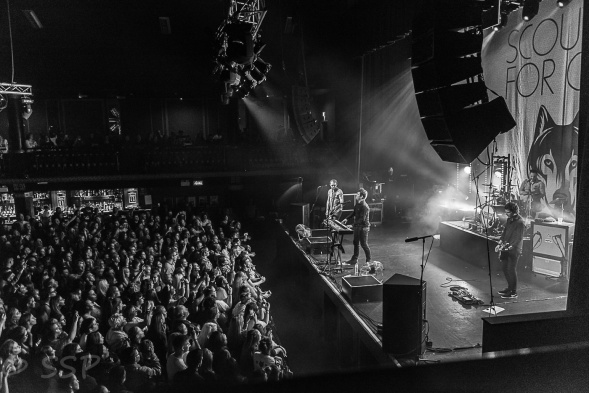 So get yourself down to a gig, or perhaps treat yourself to a bit of Ultimate Power action – dancing around on that bouncy floor, surrounded by all that history and charm is one of the best experiences you can have in the city.