Made in Manchester: Coronation Street

All the way back in 1960, one man created a revolutionary television sensation… 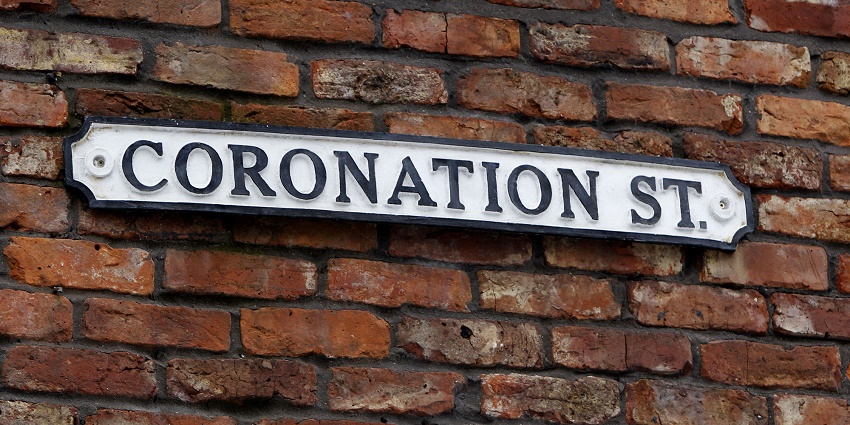 This ‘Made in Manchester’ series usually revolves around food and drinks that are made in the city (or the regions of Greater Manchester), however I’ve decided to move away from all that for this one.

Because even though Corrie is a TV show, it’s still made in Manchester, and has been for 60 years this year – something that we should be fiercely proud of and celebrate – even if you don’t watch the bloody thing.

Me personally, I dropped in on Corrie every now and then until the age of about 26, but since then (9 long years) – I’ve not watched a single minute of it. Is it still any good? Just don’t expect me to be talking about the latest storylines.

I bet Ken Barlow is still in it though isn’t he?! 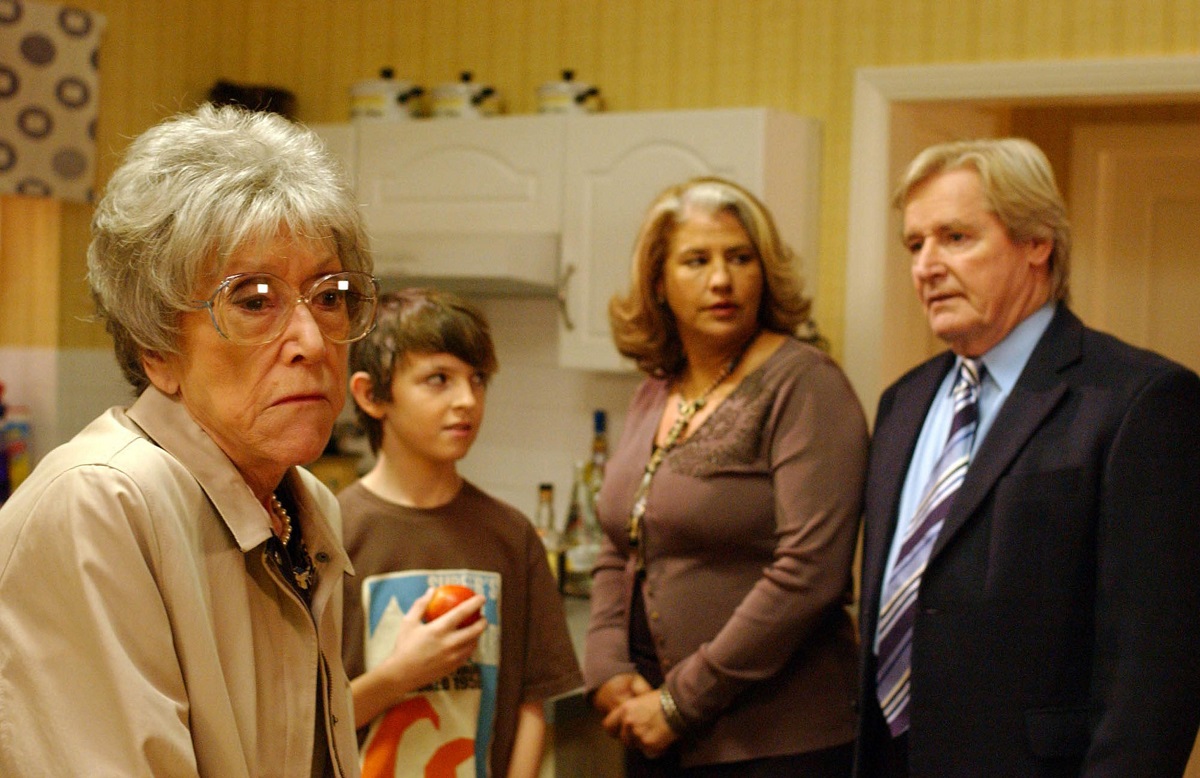 I say that because Ken Barlow, or William Roache as he is sometimes known, has been in the show throughout it’s WHOLE existence – something pretty much nobody else can say. Apart from Ian Beale in Eastenders but that was only since 1985, and he’s an annoying little shit.

The only remaining member of the original cast still in the show, Ken will (hopefully) remember the first initial run of episodes, written and created by Tony Warren, a complete unknown at the time and a massive risk for the big wigs high up in ‘Granadaland’. 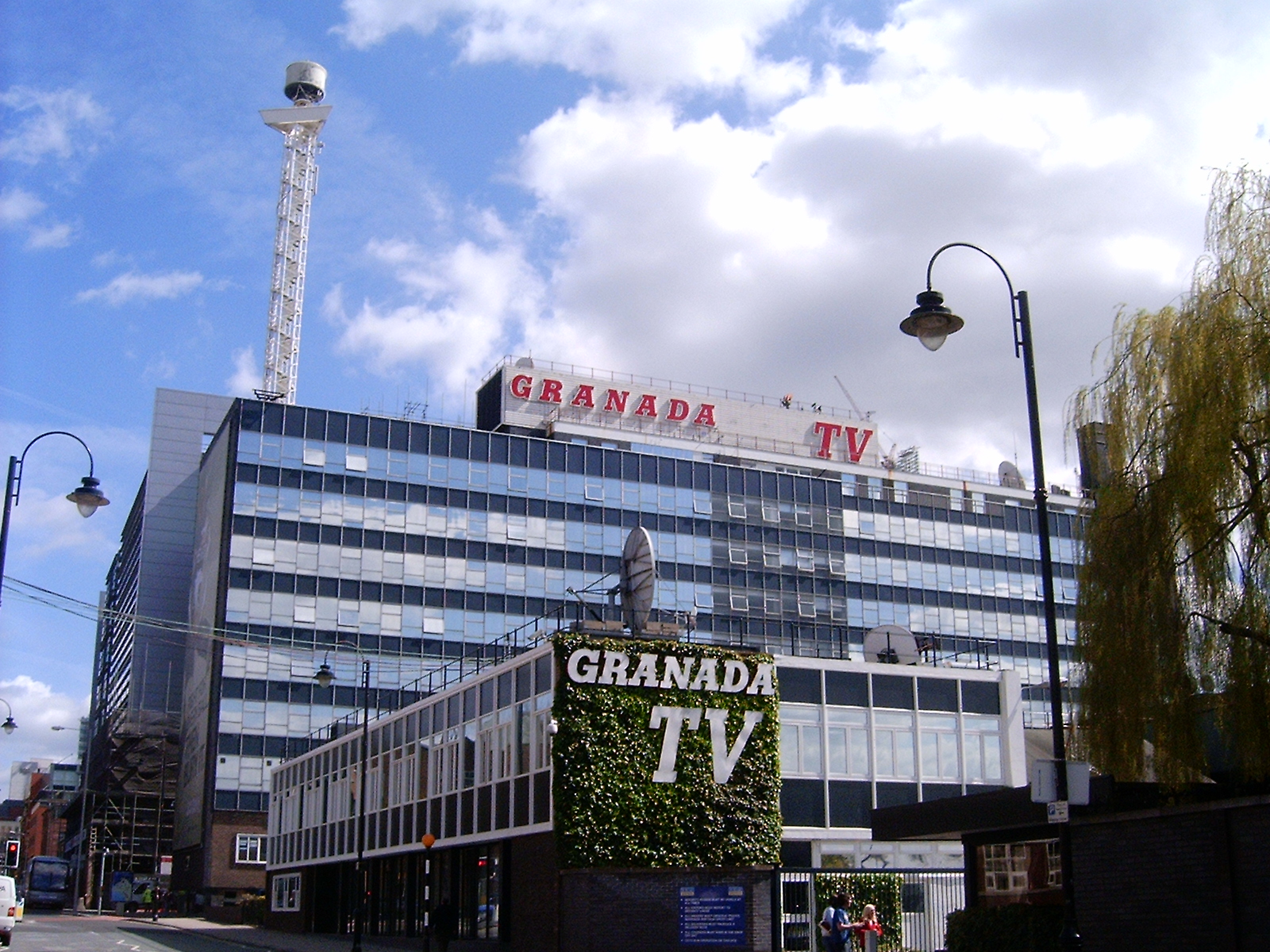 Owned by media baron brothers Sidney and Cecil Bernstein, Granada set out to become a big player in British broadcasting, with a determination to develop a strong northern identity – with northern voices, northern programmes, and a reluctance to employ anyone not prepared to live in or near Manchester.

It’s around 1959 when Anthony Simpson, who was born in Pendlebury and had been a regular on BBC Radio’s Children’s Hour, came up with a new idea for a TV show. 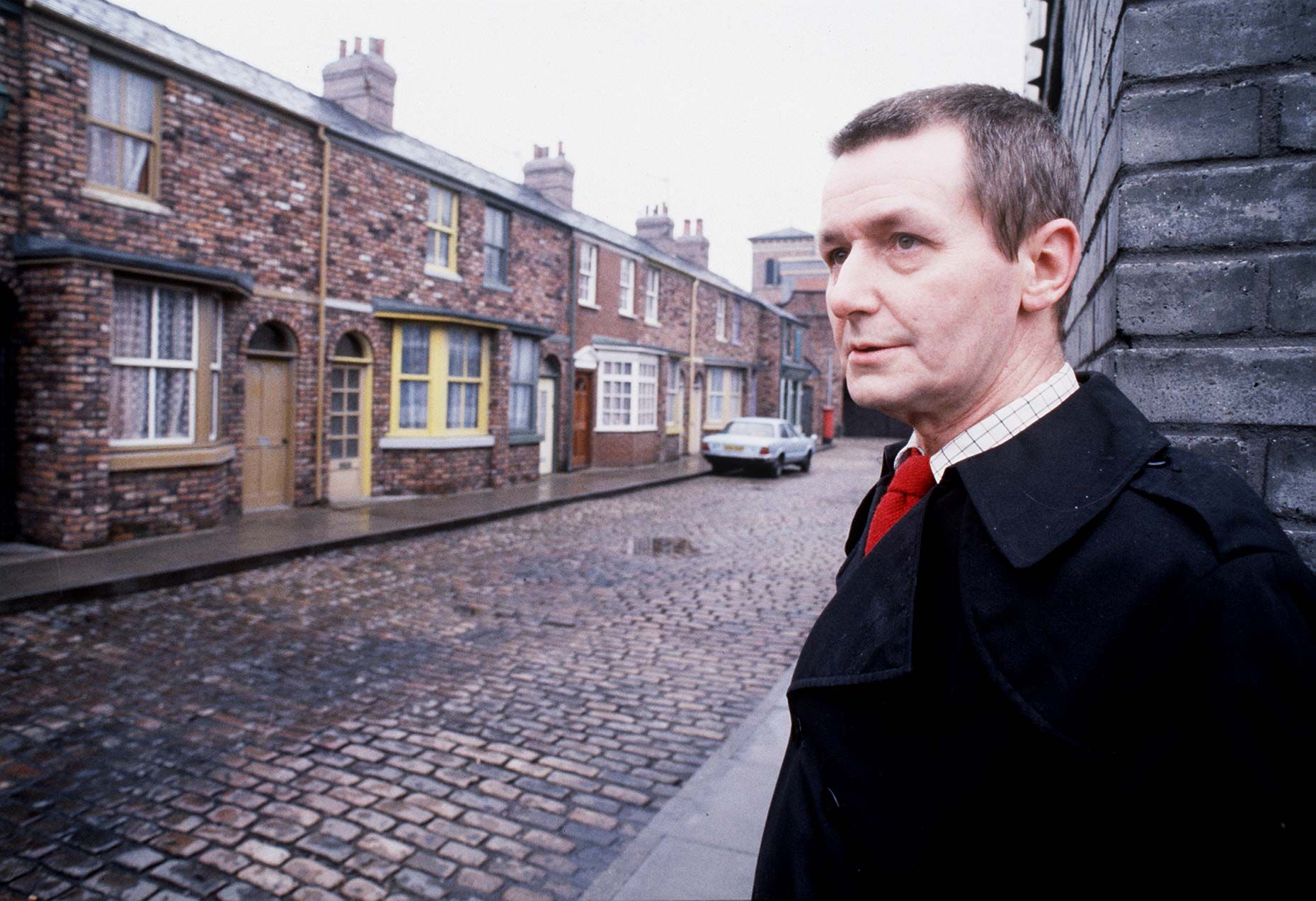 Tony Warren on the cobbles

According to BBC producer Olive Shapley who had worked with Simpson on Children’s Hour, the ideas all came to a head whilst they were both on a train at Crewe…

“…after a long period of silence, Tony suddenly woke me up saying, “Olive, I’ve got this wonderful idea for a television series. I can see a little back street in Salford, with a pub at one end and a shop at the other, and all the lives of the people there, just ordinary things and …”

“I looked at him blearily and said “Oh. Tony, how boring! Go back to sleep.” … Tony has never let me forget my error of judgement.”

By 1960, a script was commissioned for Florizel Street, with an initial run of 13 episodes, all written by Anthony Simpson – who’s pen name was… Tony Warren.

The name change came at the last minute, after initial test screenings had gone out. The name came from a picture Warren owned of Prince Florizel, but most people at Granada hated it. 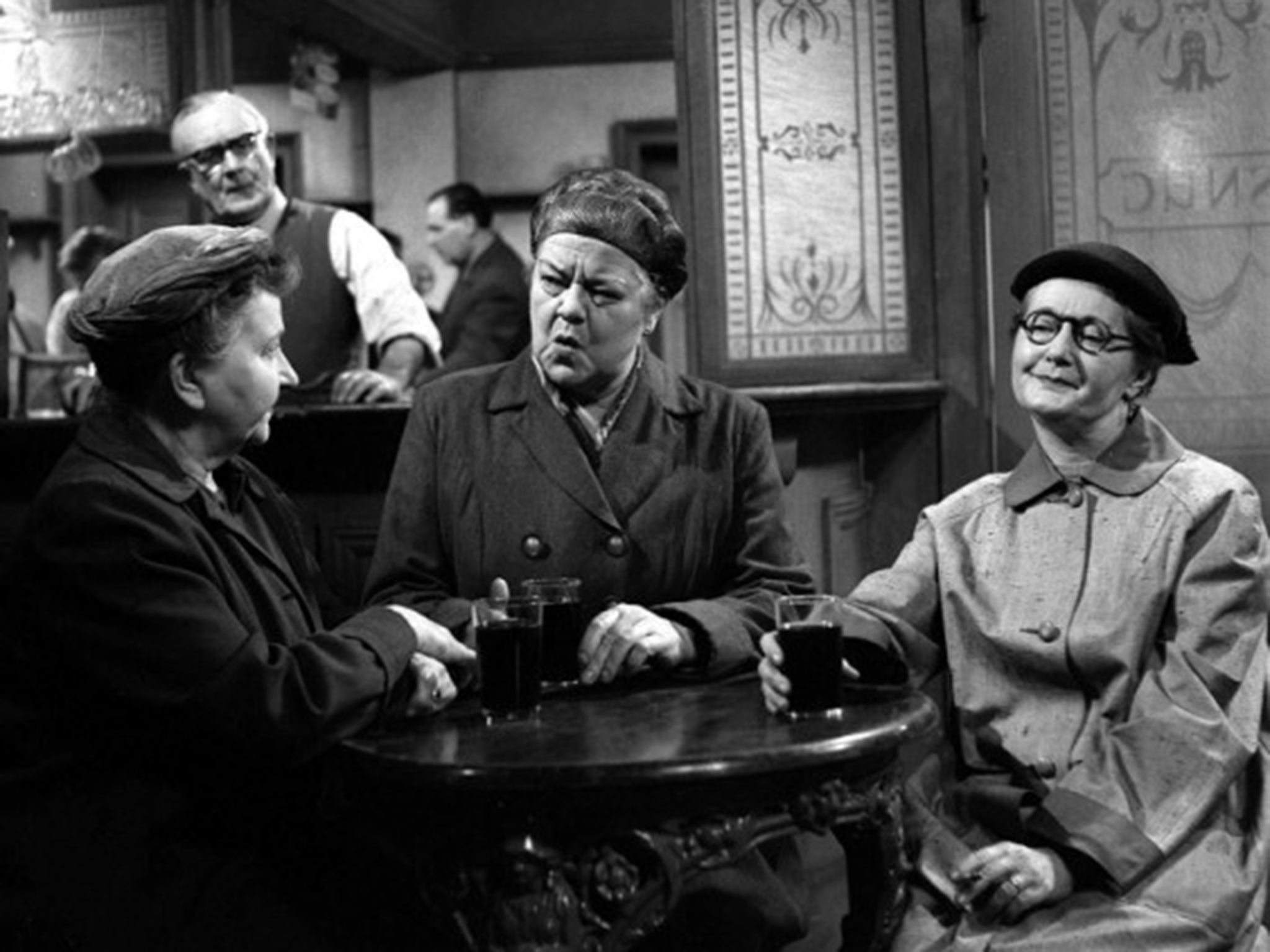 Apparently the change to ‘Coronation’ came after Agnes, the tea lady, said that to her it sounded like a brand of disinfectant. Others actually claim that it was our old friend William Roache, who found it difficult to pronounce the name of the street, as the reason it was changed.

For the first year of it’s existence, the show was filmed and broadcast LIVE to millions, changing to become a pre-recorded show in March of 1961. Since then though they’ve done a couple of special live episodes to commemorate the show’s 40th, 50th and 55th birthdays – which are always brilliant because someone invariably gets a line wrong and looks stupid in front of everyone. 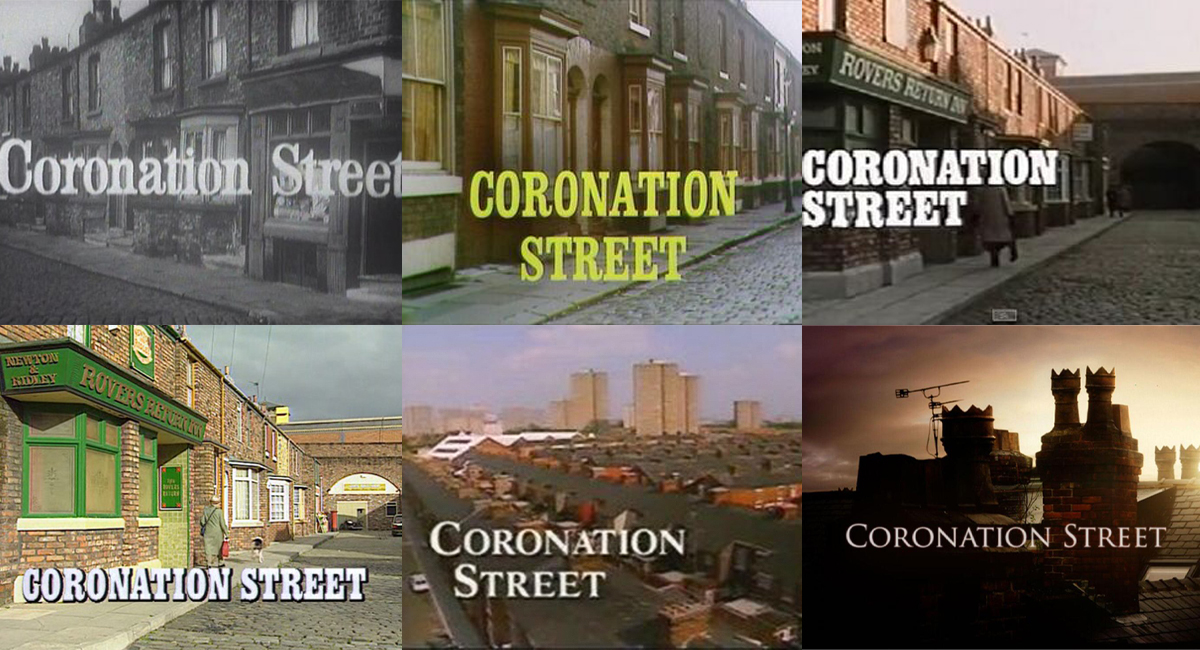 Corrie through the years

So, 60 years of a TV show set in Salford and filmed in Manchester (and then Salford when the set moved to MediaCity back in 2013) – there’s been A LOT going on! Loads more than on any actual normal street, with serial killers, multiple murders, affairs, explosions, crashes, fights and countless pints of lager poured over Steve McDonald’s head.

Also I think in those 60 years clearly the hardest bloke to ever live on Coronation Street is Jim McDonald – the only man on this planet who can pull off a moustache. Fair play to him. 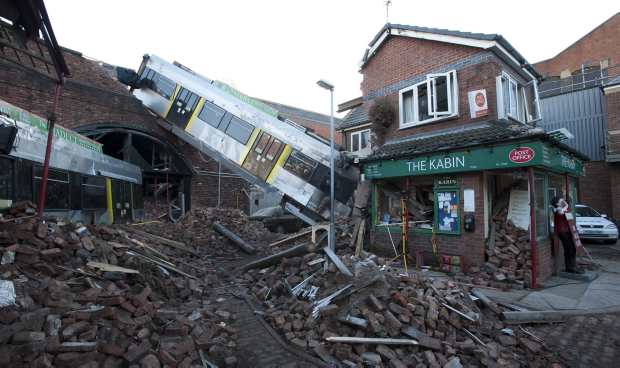 The famous tram crash from the 50th birthday

In the entire run of the show there has been…

The show’s most watched episode ever was all the way back on Christmas Day in 1987, when legend Hilda Ogden left the cobbles and was watched by a whopping 26.65 million viewers! 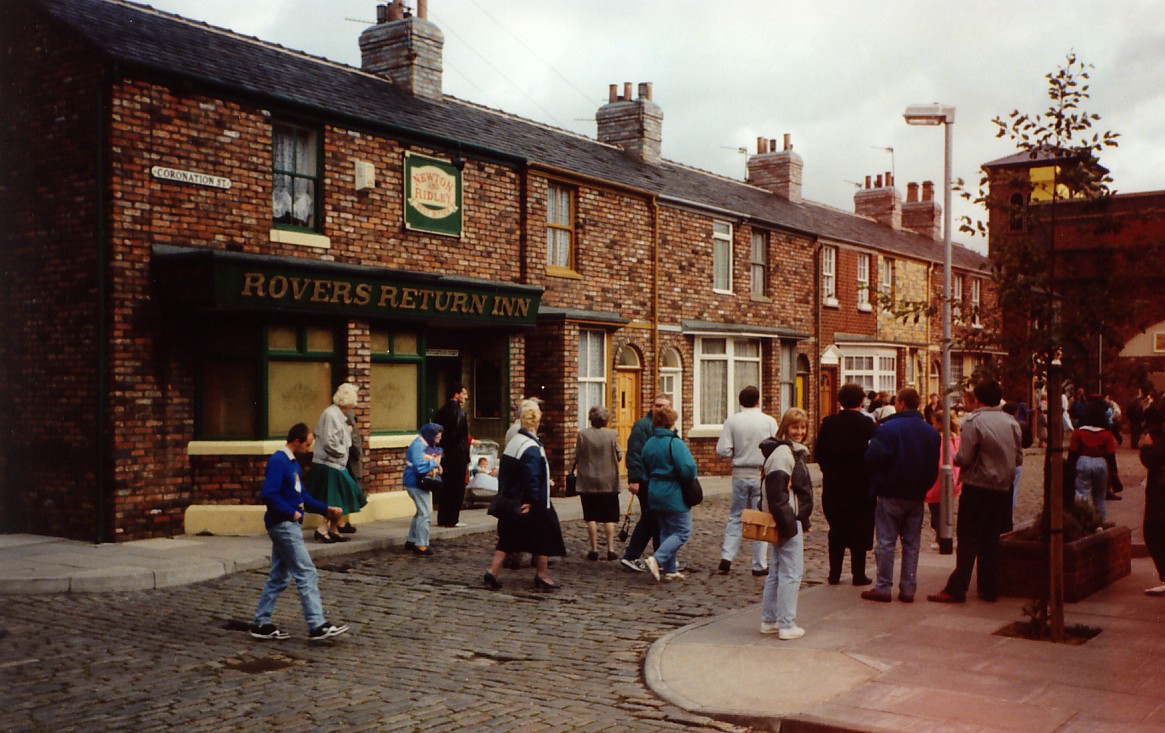 Corrie at the old Granada Studios

Nowadays the show is filmed throughout the week over at the brand-new studios on MediaCity, which replaced the aging Granada Studios on Quay Street back in 2013.

They re-created the street over in Salford, including placing more than 11,000 cobbles. The set was built to a greater scale than the original Granada one, as well as adding additional internal details to allow for greater mobility and shots when filming.

2018 also saw a brand-new extension with the addition of a Victoria Street set, which features a garden and a memorial bench paying tribute to the Manchester Arena bombing 22 victims, including Coronation Street super fan Martyn Hett. 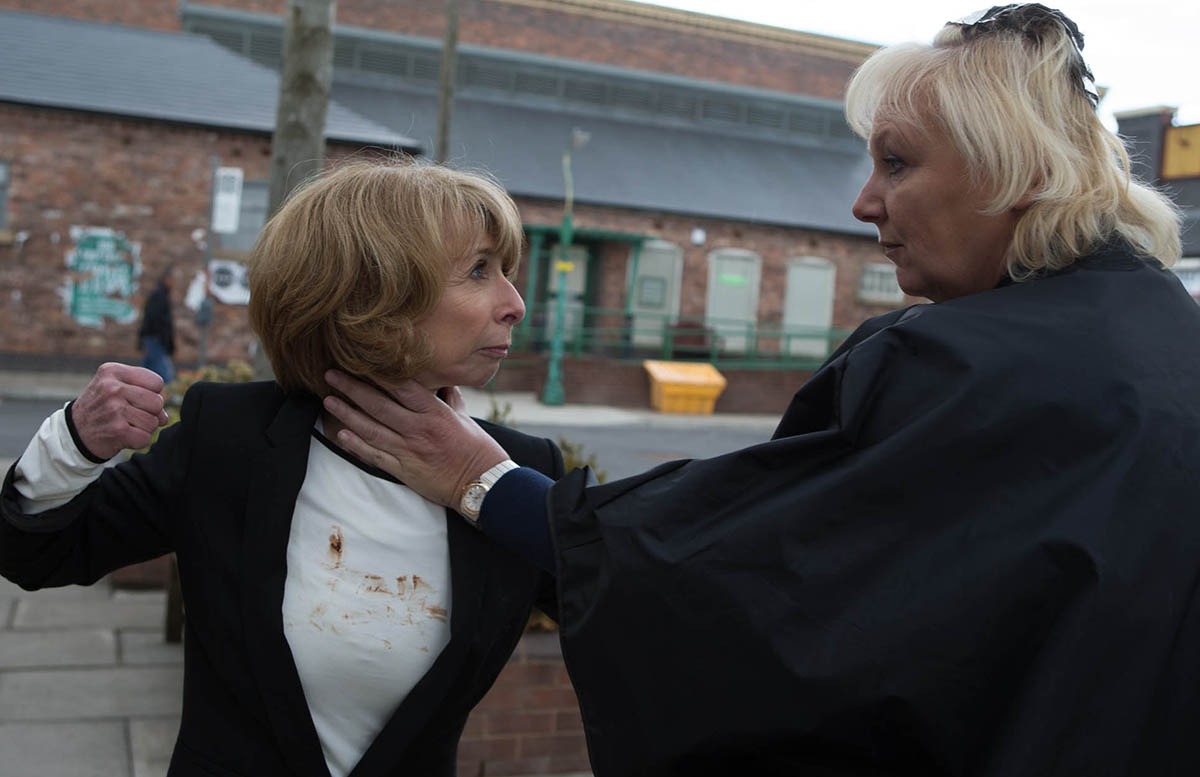 Come on Eileen – give ‘er a punch in the face!

For the actors and production teams, the filming of Corrie is extensive, with five episodes typically taking around 66 hours to film per week!

Although if we’re being honest with each other, there won’t be anywhere near all that for the actors, but more for the tireless grafters behind the cameras, from the wardrobe department to the editors to the writers – all of whom go together to create something that every Mancunian (and Salfordian) can be proud of. 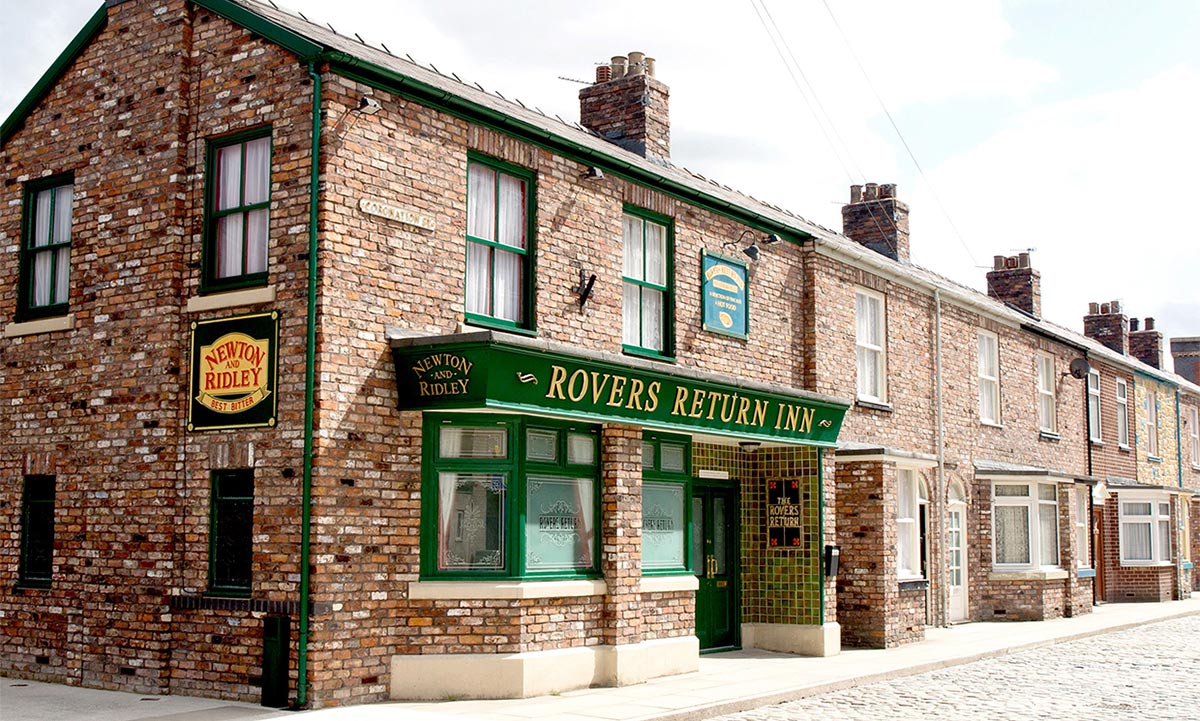 Finally, Corrie is still a big hit elsewhere in the world, with each episode currently being broadcast in more than 40 countries including Canada, Australia, New Zealand, Ireland, South Africa, Poland, and even Taiwan!

The ‘Roadmap’ Out of Lockdown: When can we go to the Pub!?

Where to watch the World Cup 2022 in Manchester