Manchester Stands in Solidarity with Ukraine (and How You Can Help)

The people of Manchester are coming together against the events in Ukraine... 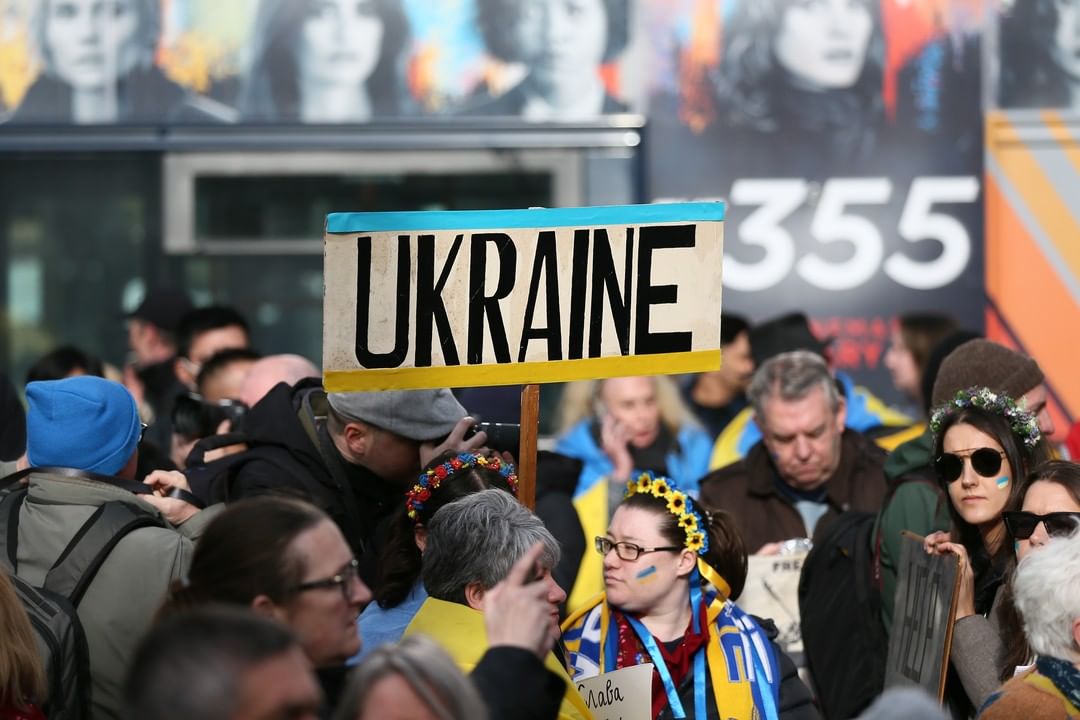 It feels almost surreal to be writing about restaurants, pancakes and events in Manchester when the news is so full of the awful events unfolding over in Ukraine.

As Russian forces invaded the country last week, we’ve all had a front row seat to the horrors of war through social media, video and first-hand accounts of the fighting. 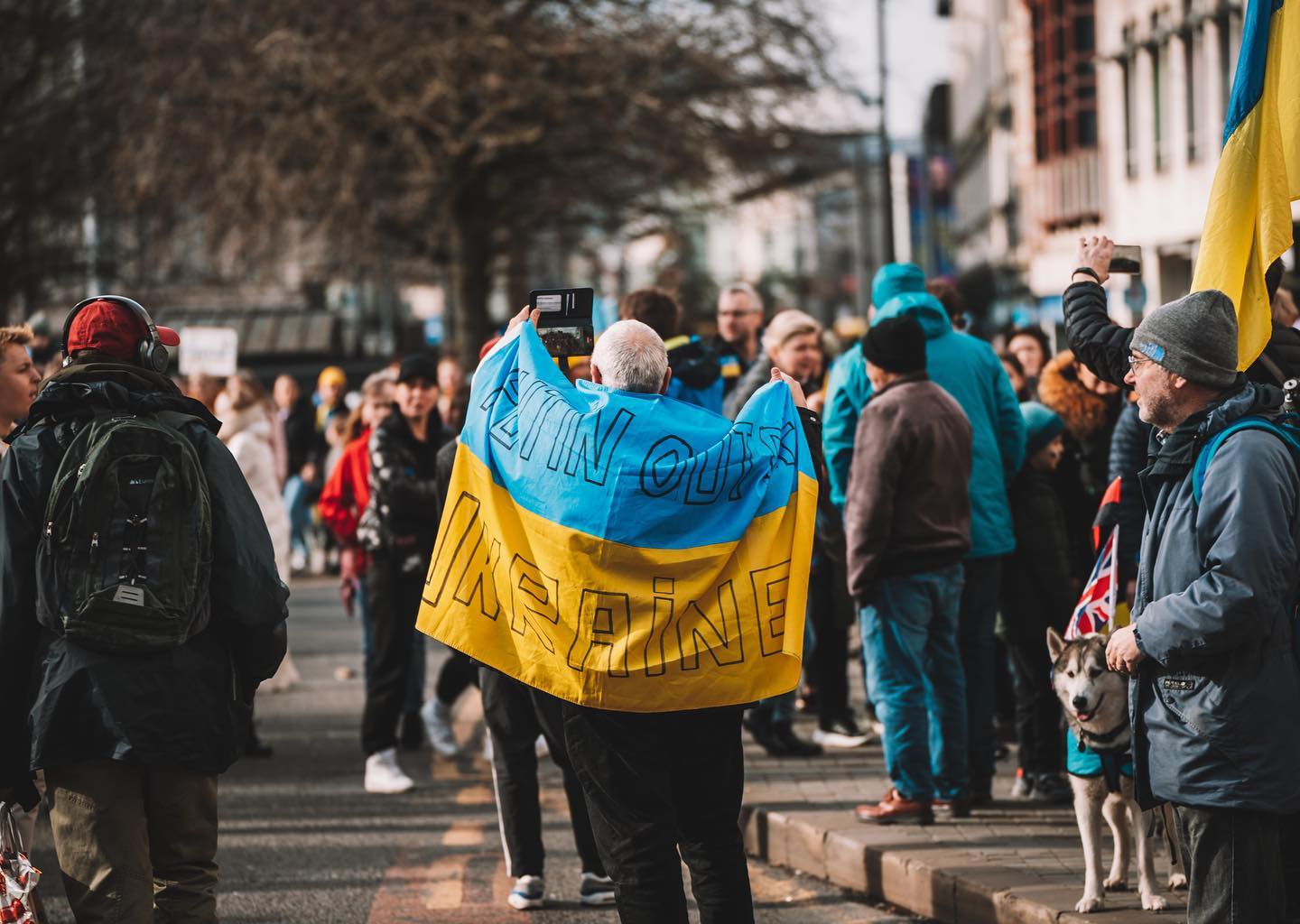 In response, rallies, vigils and protests grew across the globe in support of Ukraine and its people, with huge gatherings in Berlin, London and Paris, as well as Brussels, Vienna and Madrid – all under the slogan “Solidarity with Ukraine”.

The weekend also saw many of the people of Manchester take to the streets too, with large protests seen in Piccadilly Gardens, alongside venues taking in donations of aid, fundraisers and even monies of the sale of food and drink going towards the humanitarian efforts. 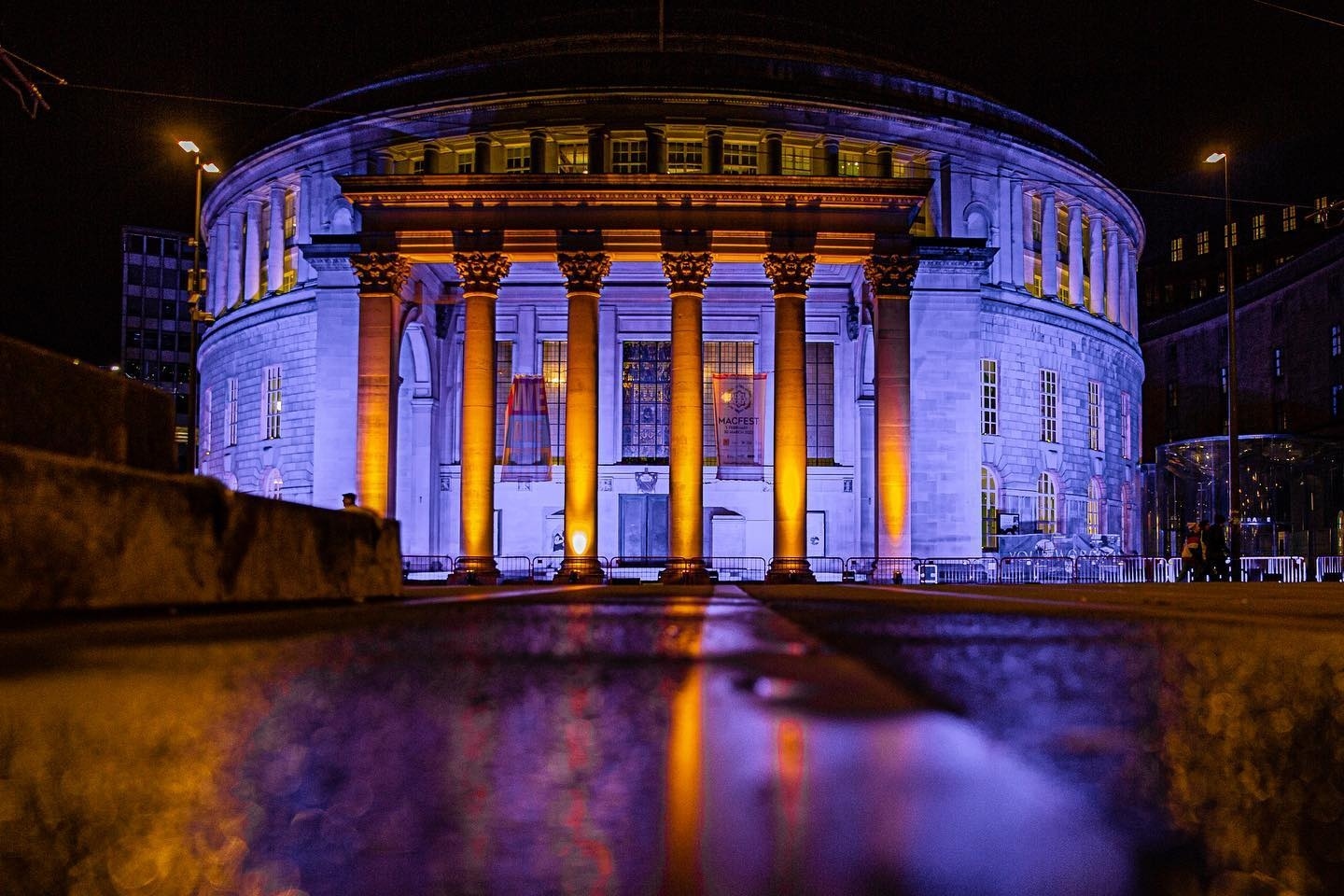 On Thursday 24th February, hundreds of young Ukrainians were joined by people from all over for a vigil at St Peter’s Square. The crowd sang the Ukrainian national anthem and speeches were made in both Ukrainian and Russian languages. 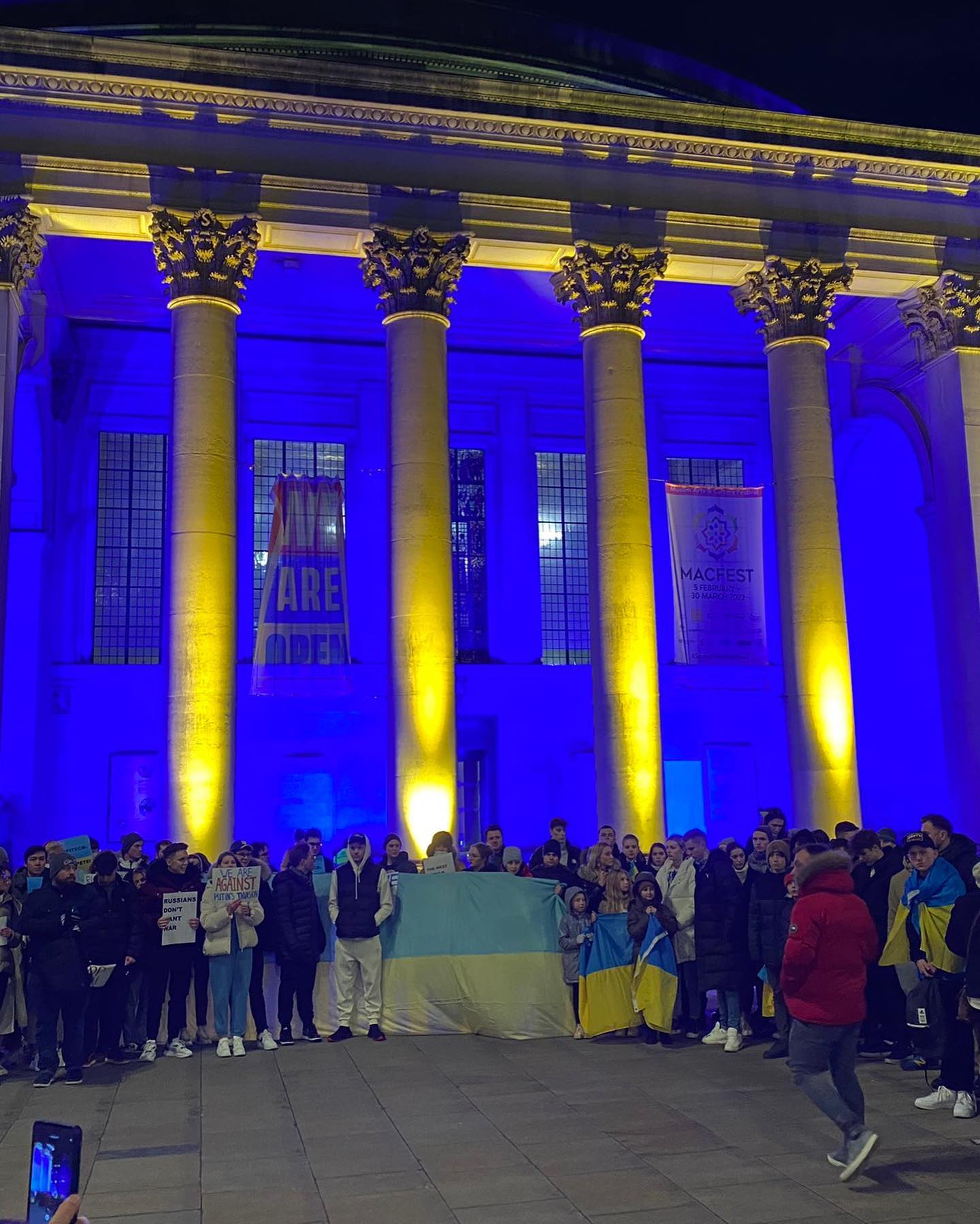 The Council also lit the Central Library building itself with the blue and yellow of the Ukrainian flag – showing the city’s solidarity with the country.

Over the weekend, Piccadilly Gardens became a sea of blue and yellow as flags and placard were waved by a crowd of a few hundred people gathered by the Queen Victoria statue. 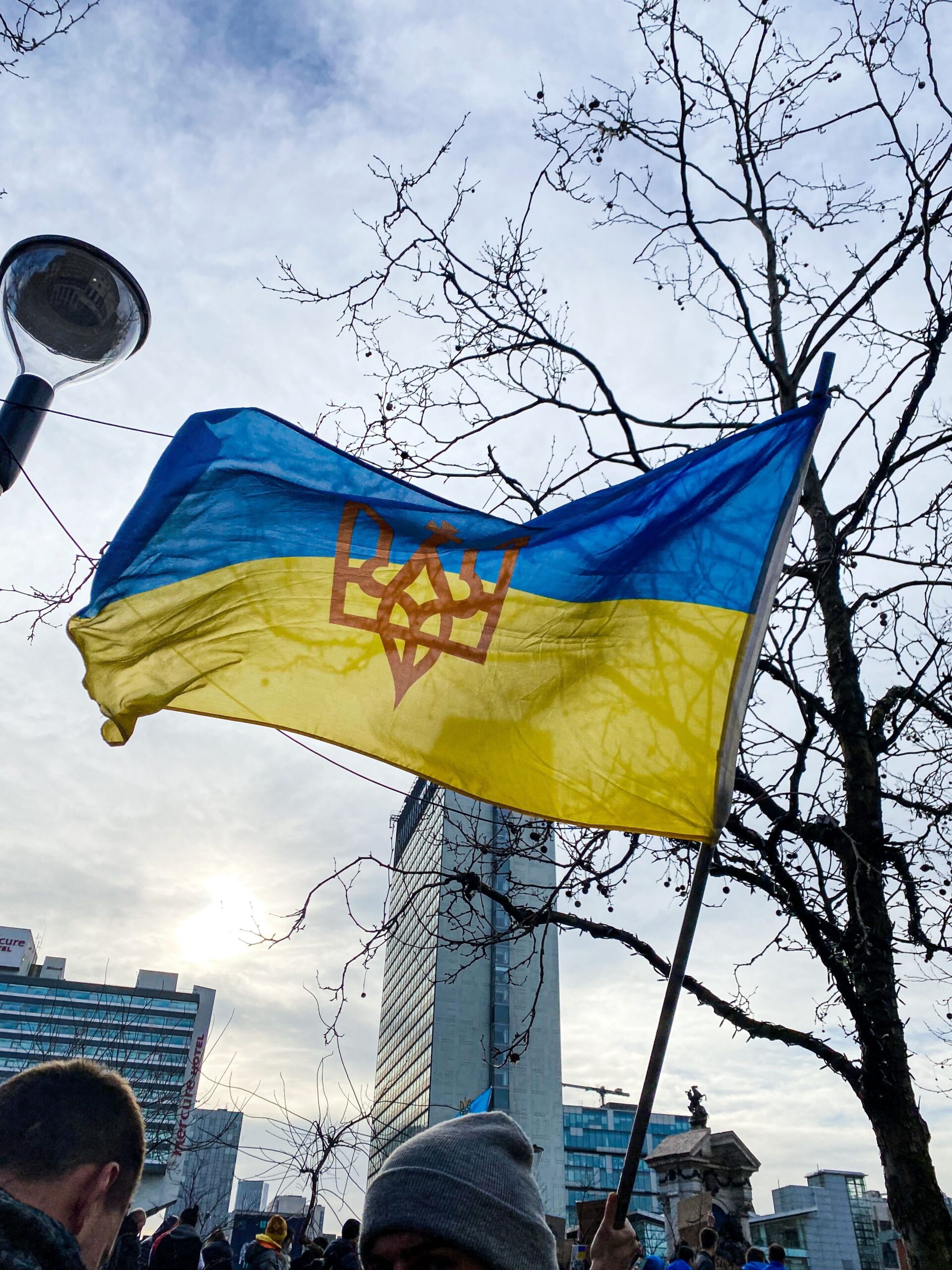 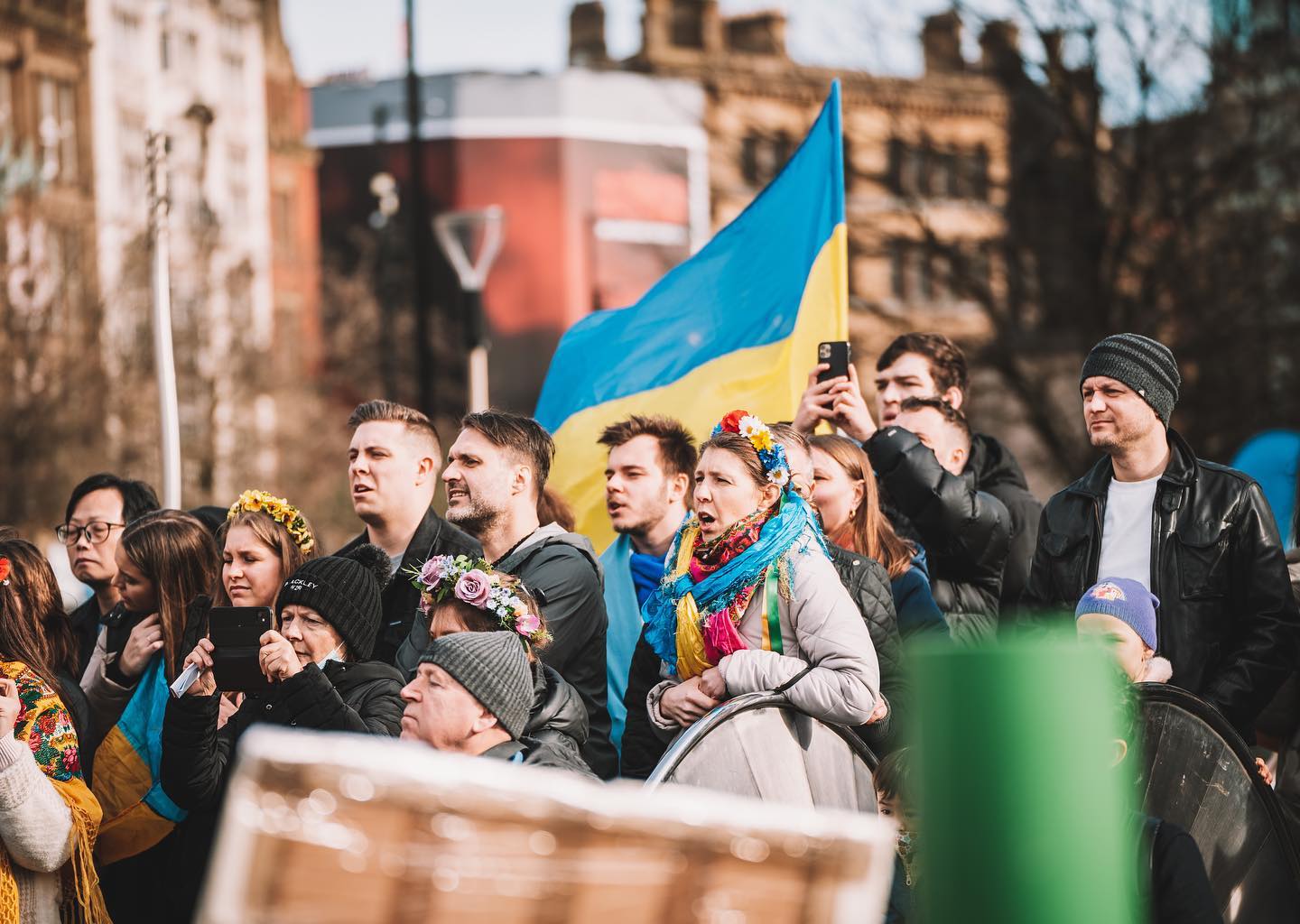 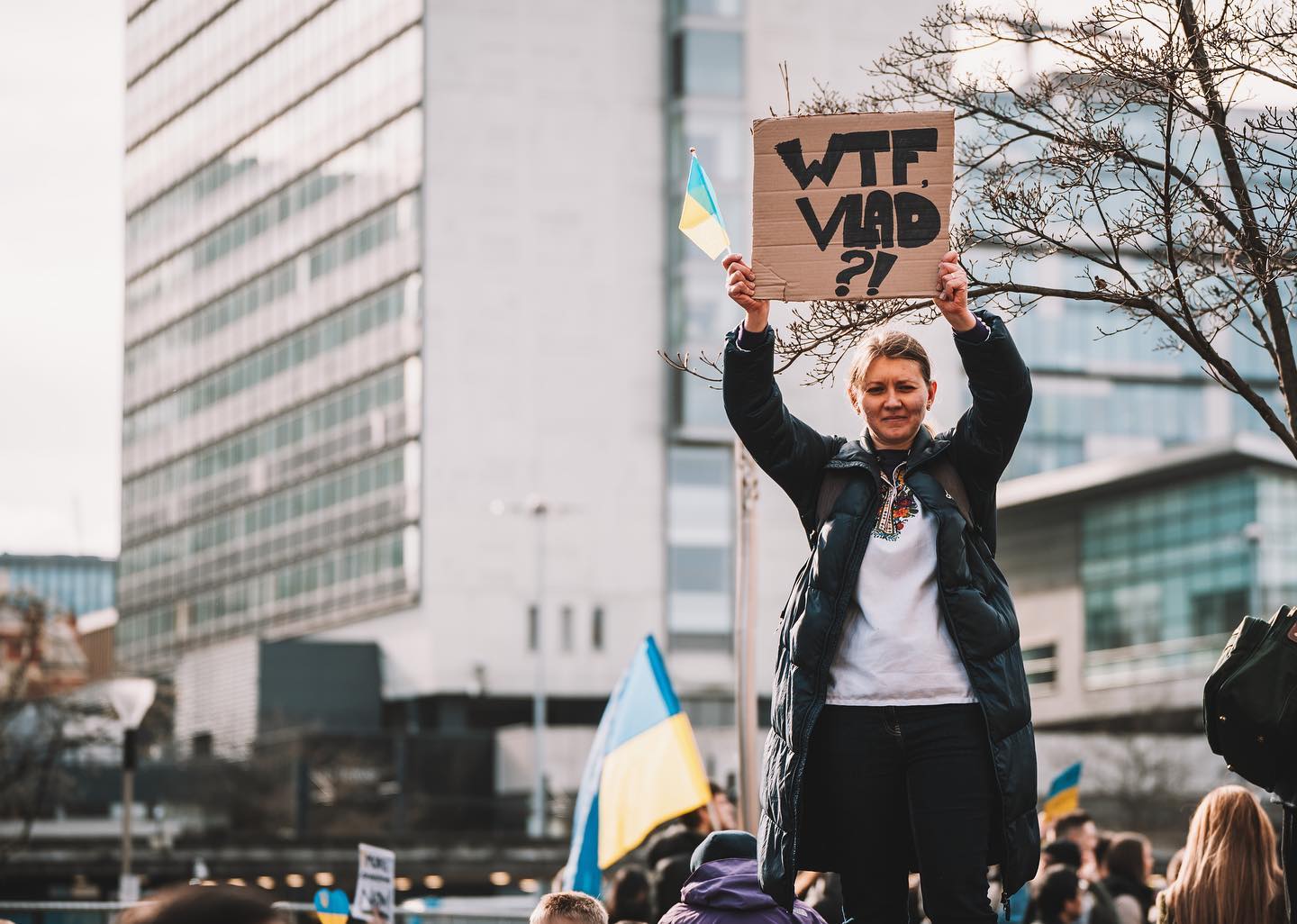 As the days progressed, the number of people in attendance continued to rise, with the crowd of over a thousand spilled out onto Oldham Street.

Ukrainian flags were joined by flags from all over the world, including the country’s near neighbours in Poland, Lithuania and Georgia, plus a large congregation from Hong Kong – themselves experienced in protests and strife over the last few years. 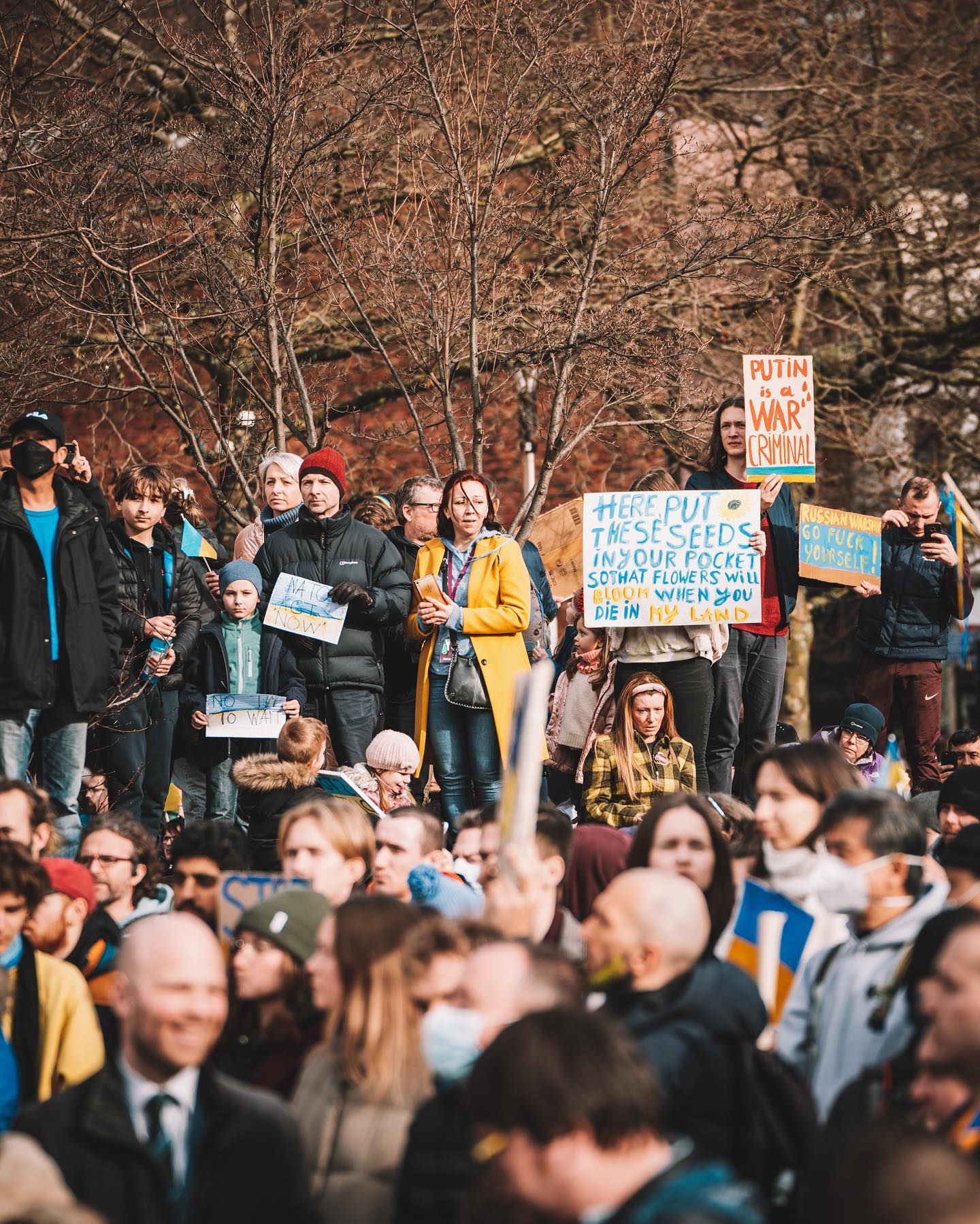 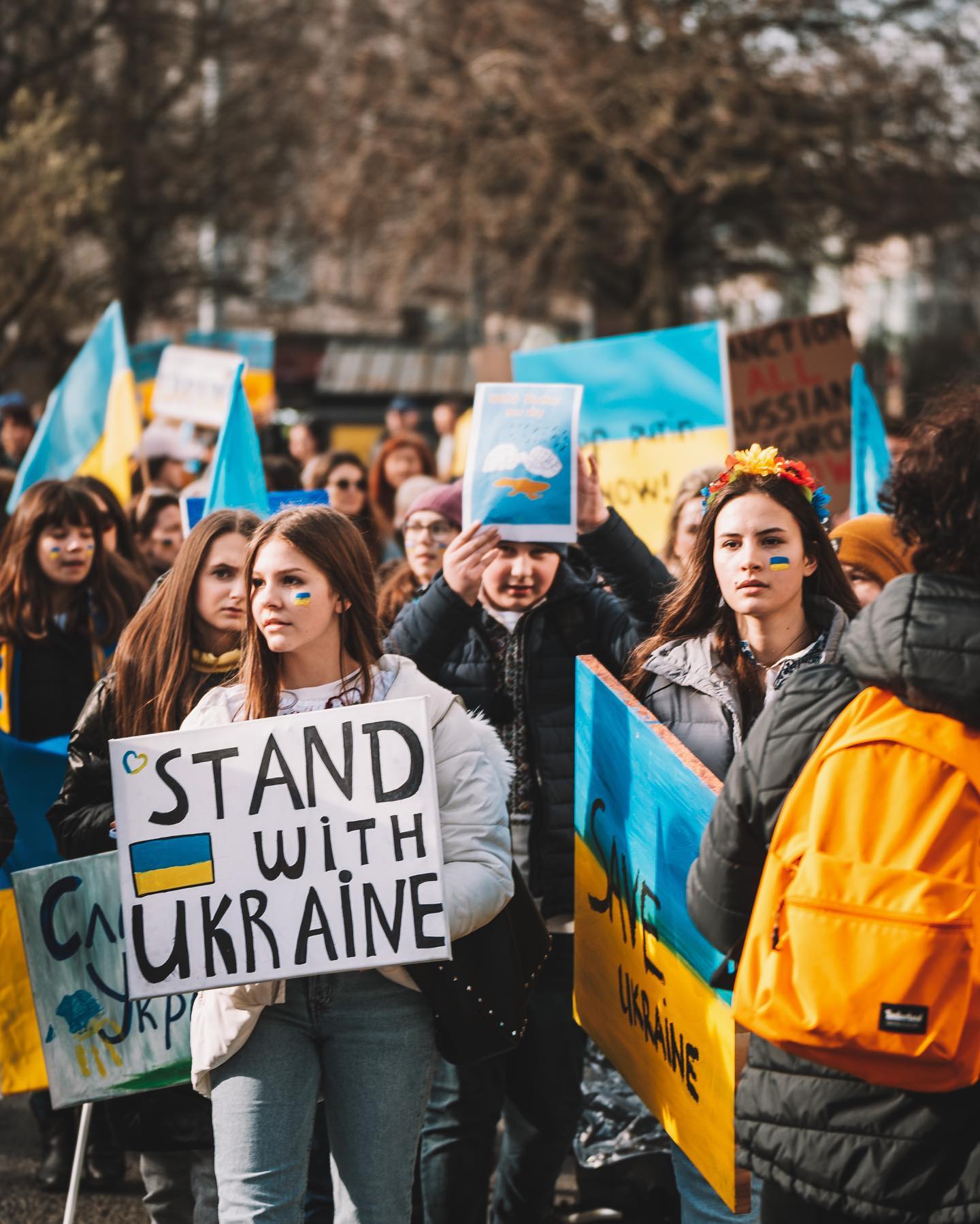 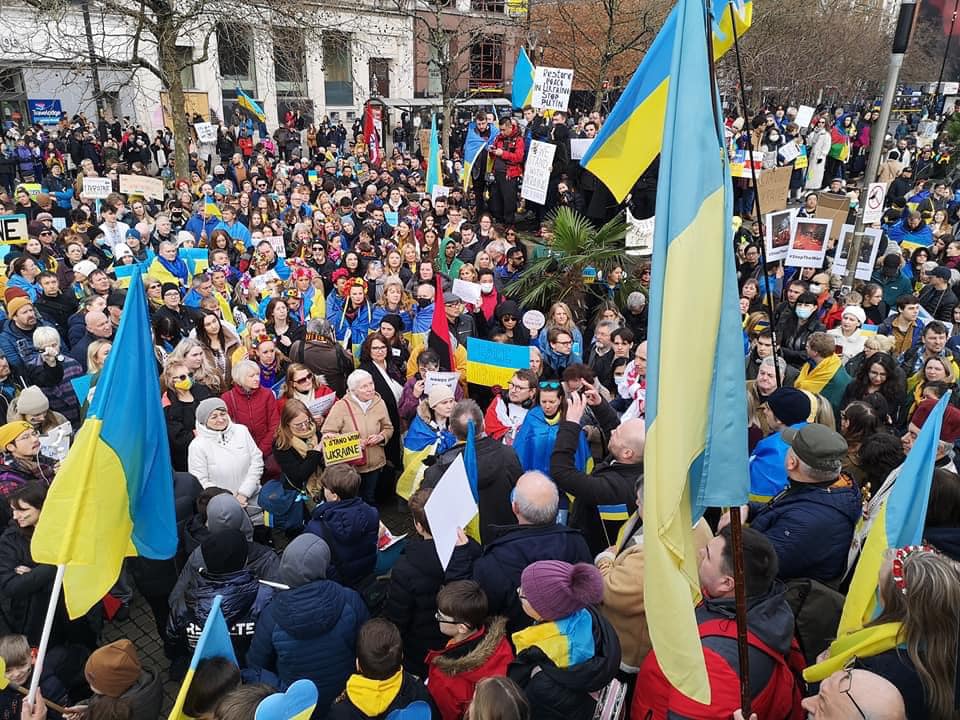 The Ukrainian Cultural Centre ‘Dnipro’ Manchester have posted on their Facebook page explaining where people can drop off donations.

Collections have also been set up by the members of the Ukrainian communities in Salford, Cheadle and Bolton – plus information on how people can help. 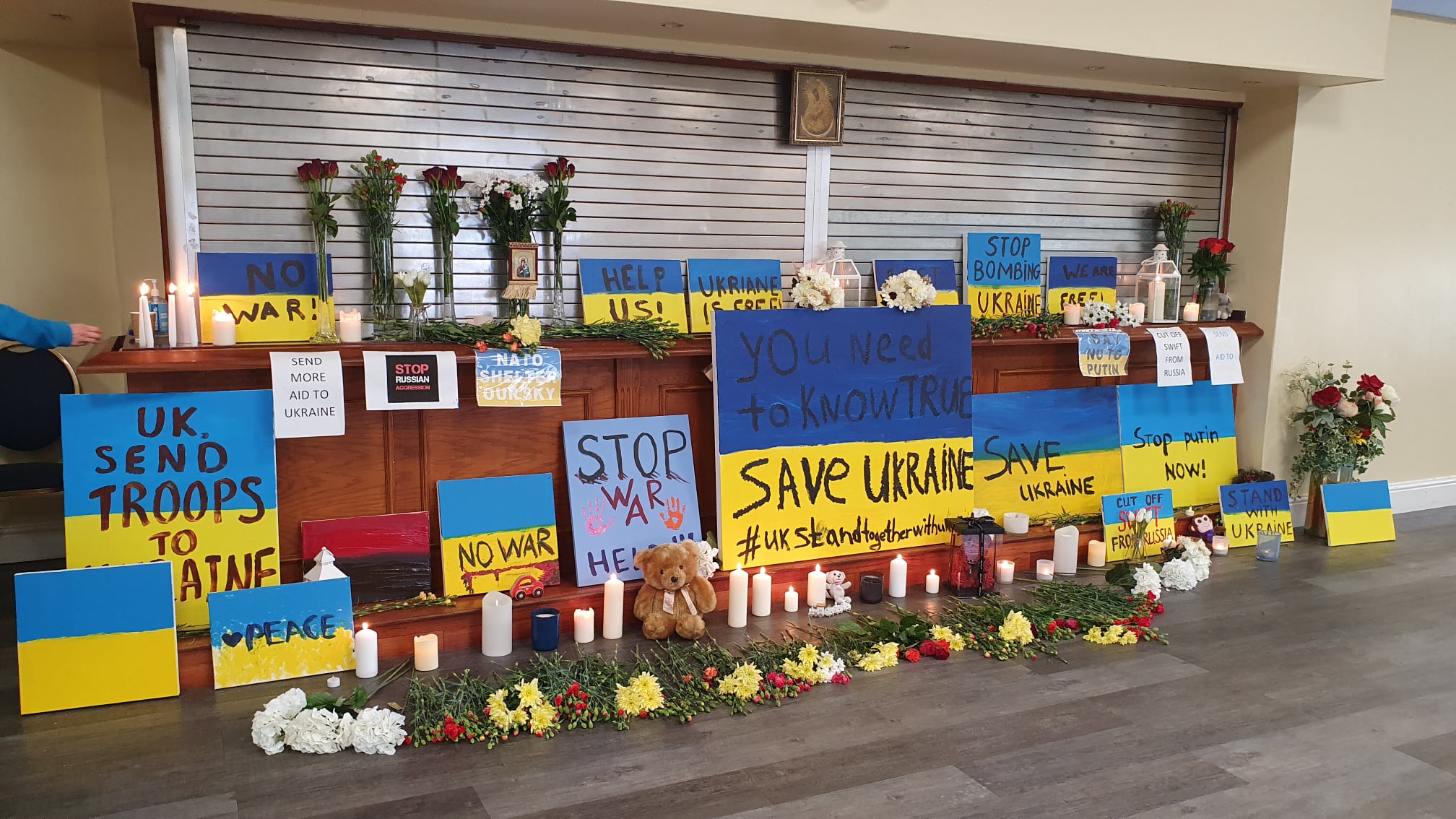 The Association of Ukrainians in Great Britain have set up a Go Fund Me page where you can donate funds for immediate emergency and ongoing needs. 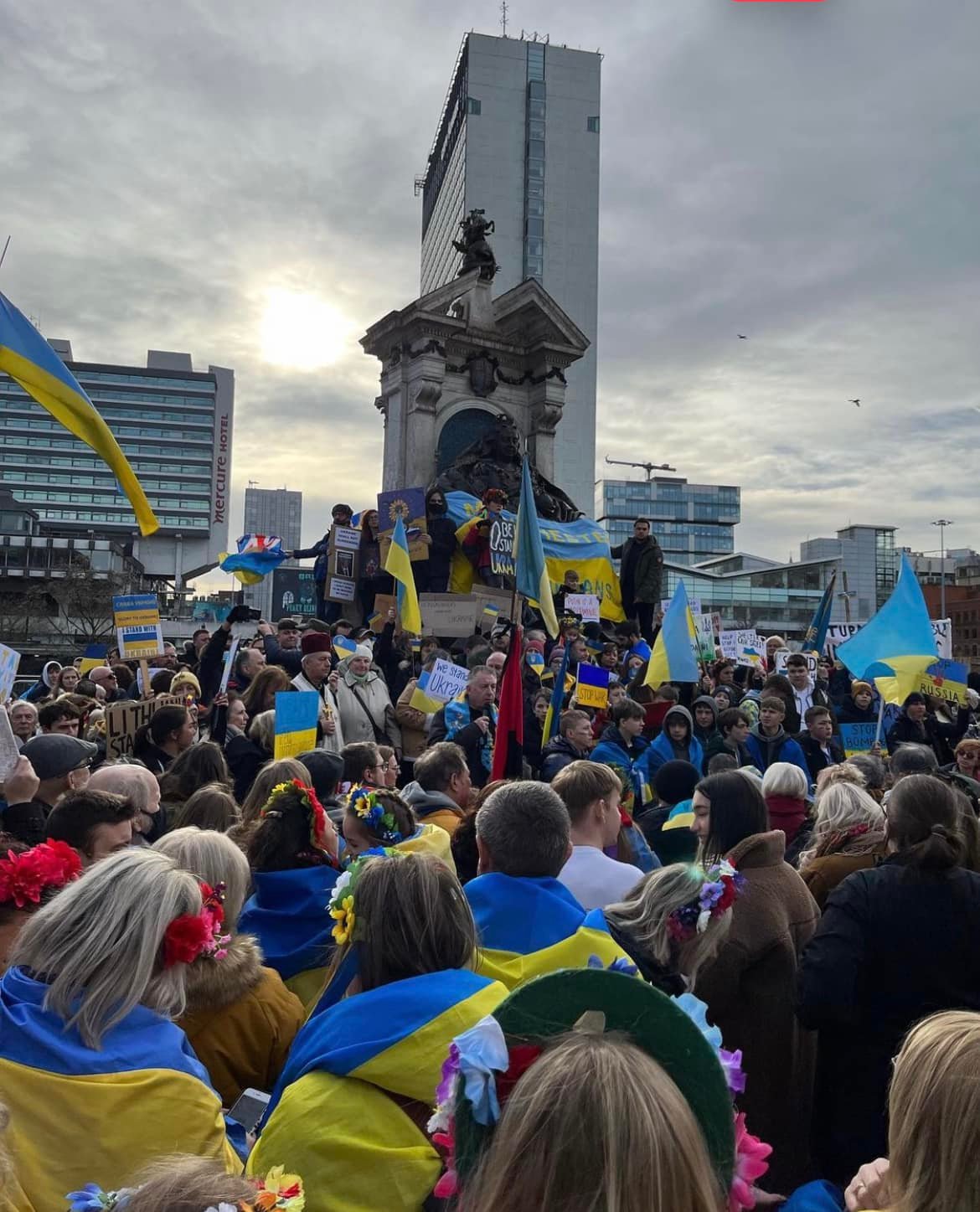 Some of Manchester’s eateries and bars have joined up with the #COOKFORUKRAINE scheme, pledging an amount of profits of sales towards the cause. 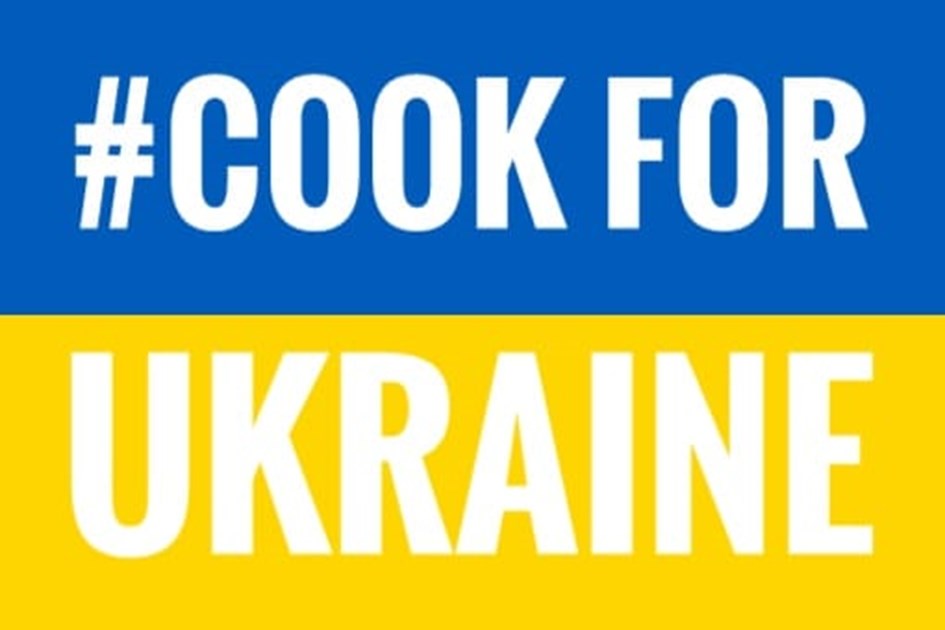 The Sparrows will be donating profits of selected daily dishes to the cause, while Sugo Pasta Kitchen are set to contribute 50p for EVERY SINGLE PASTA DISH they sell Tuesday, Wednesday & Thursday in March.

For more information on #CookForUkraine – and to donate towards the cause, head to their Just Giving page now:

NEW OPENING: The Coastal Indian Restaurant in a Former Tailors in Wilmslow