Myths of Manchester: The Canal Pusher

Let's get this series off to an exciting start and look at that most famous of Manchester mysteries - the Canal Pusher. 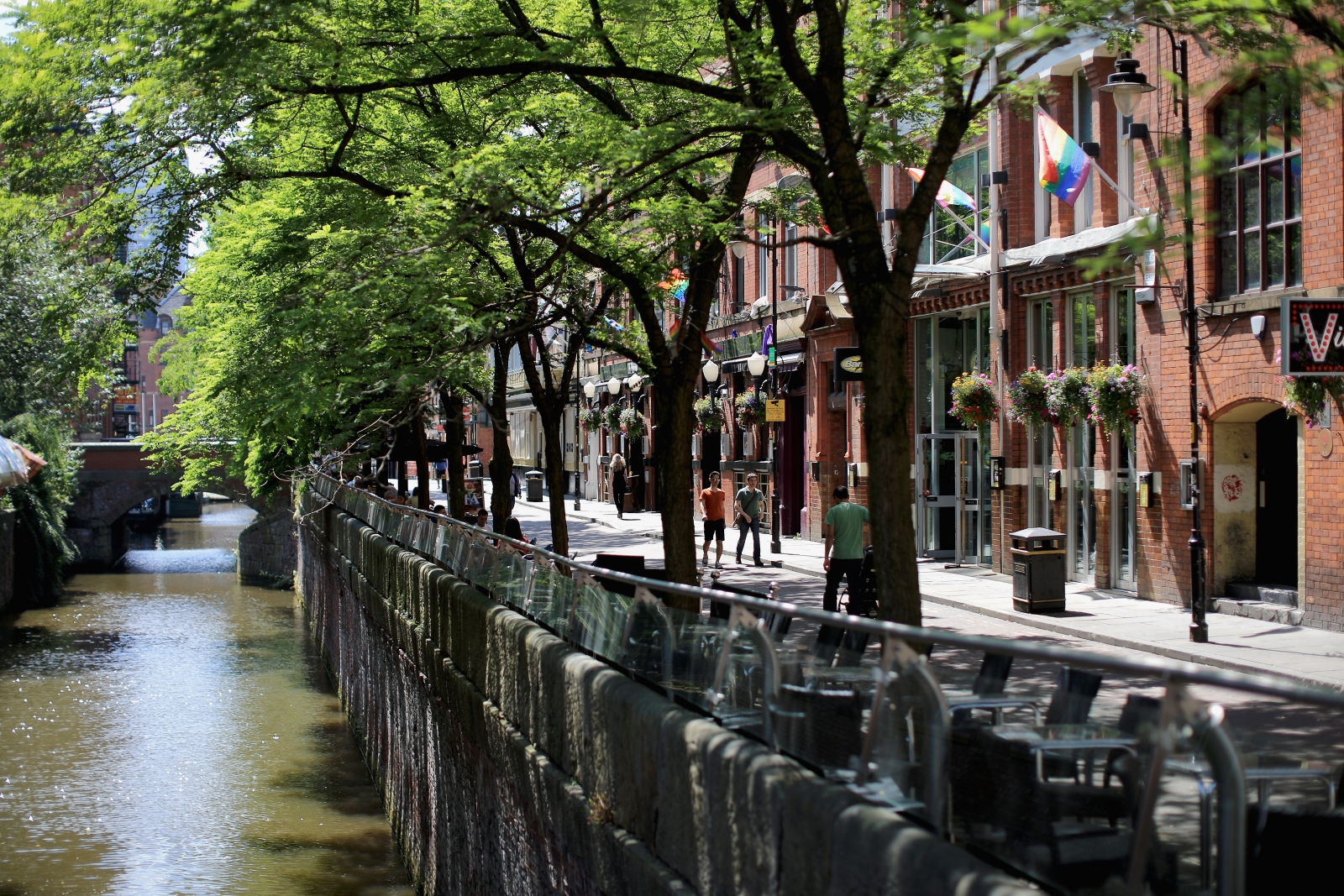 Since 2007, authorities have tragically pulled 77 dead bodies out of Manchester’s canal and waterway network, many of which are young men. Are these a series of unrelated accidents or is there something more sinister to blame?

Who is the Canal Pusher?

In light of this news, many publications around the country have been eager to jump on the idea that Manchester is home to a sick serial killer, one that prowls the canal paths at night looking for victims to push to their doom in the icy waters.

This ‘pusher’ has now pretty much become a Manchester legend, with many people warning of the pusher any time you get within spitting distance of a canal. The problem now is; the whole thing might just turn out to be impossible to debunk entirely. 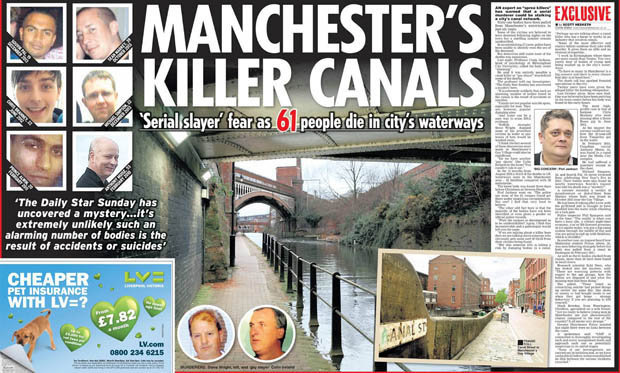 What if the Canal Pusher is real?

Taking the approach that the Canal Pusher actually exists and is indeed one absolutely mental serial killing maniac – we’re obviously faced with a long list of problems. Not just that any stroll down the side of the canal can end up in a frosty death, but exactly why and how they’ve got away with it for so long.

Now, I am in no means a professional criminal investigator. In fact, the only real investigation I have ever carried out was when people suspected Andrew Garside of stealing all of our wrestling figures on the last day of school in 1996. (He was). But I’ve seen enough true crime programmes on telly and have read enough Ann Rule books to ascertain a few things about the Canal Pusher (if they’re a real person). 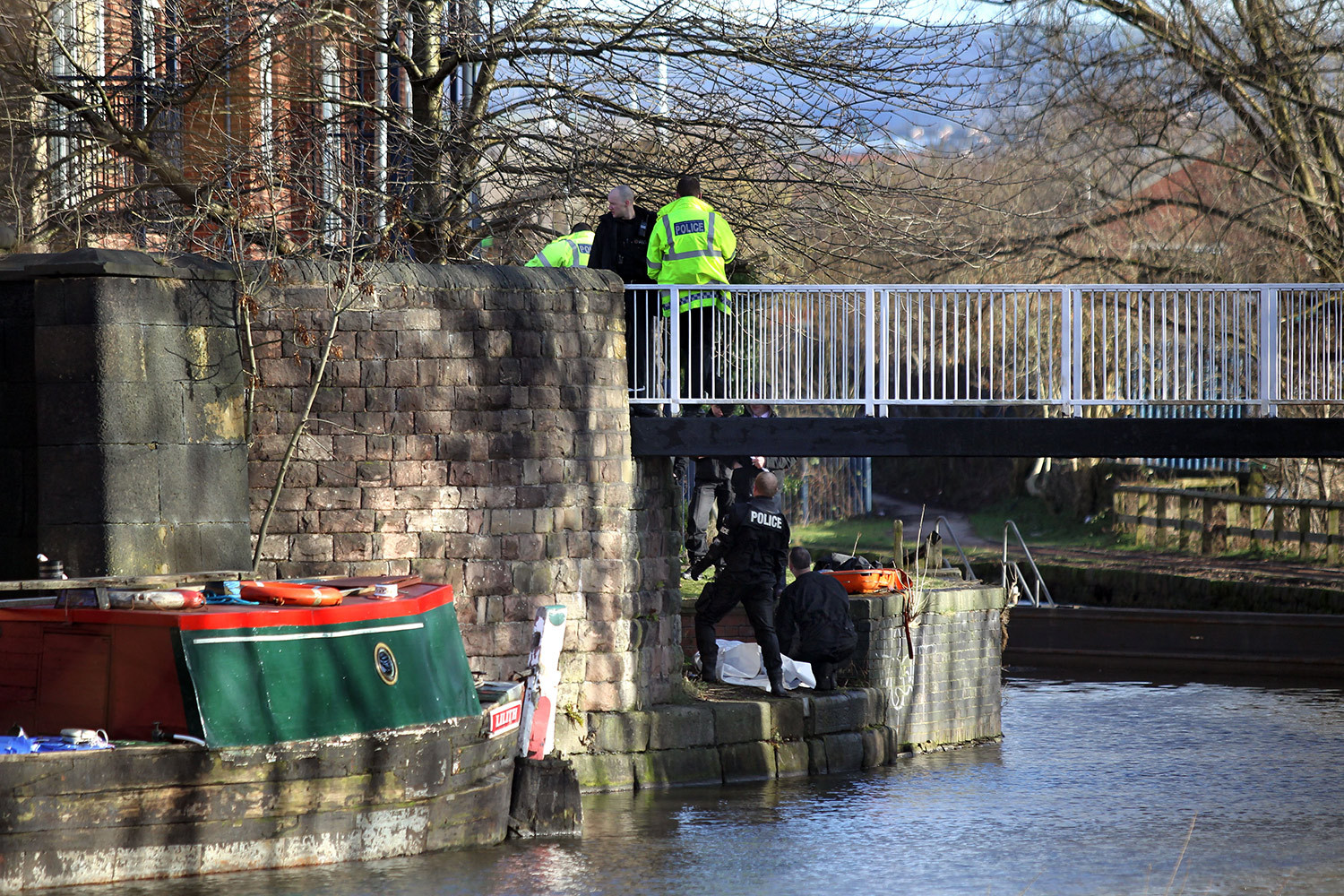 Firstly, there’s a motive, then there are the victims and finally, there are the means in which to carry out the crimes. These aren’t crimes of passion or revenge, serial killers murder because they are ‘different’; unable to feel empathy for the people they commit crimes against.

Many of the world’s most prolific murderers are people who fail to feel emotions as we do, with each horrific act looking to attain a feeling of ‘something’ – which is typically always just out of reach. This typically manifests itself in some form of sexual gratification – something which certainly doesn’t relate to anything the Pusher has done thus far.

Next up is the victims. Many of the bodies that have been dragged out of the canals were young men, and of the 77 only 12 have been deemed to have been caused by ‘mysterious circumstances’, as the majority of the victims elicited no signs of being in a struggle or displaced any suspicious injuries. 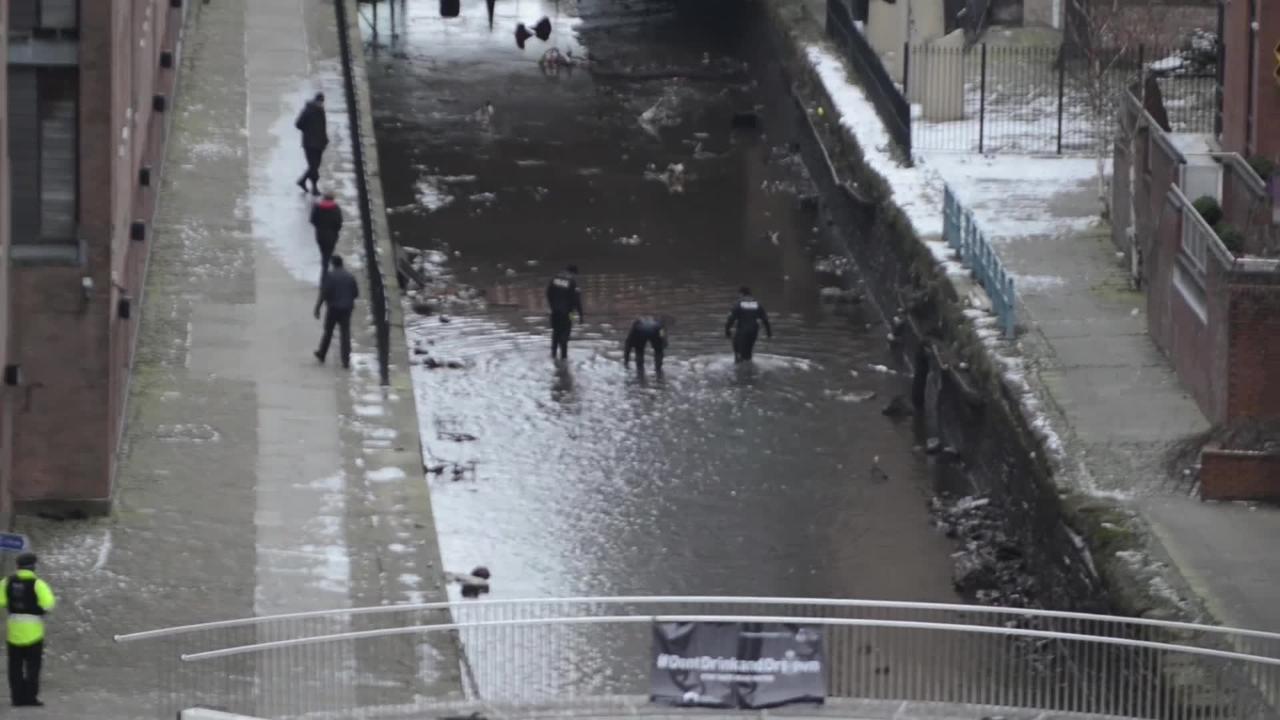 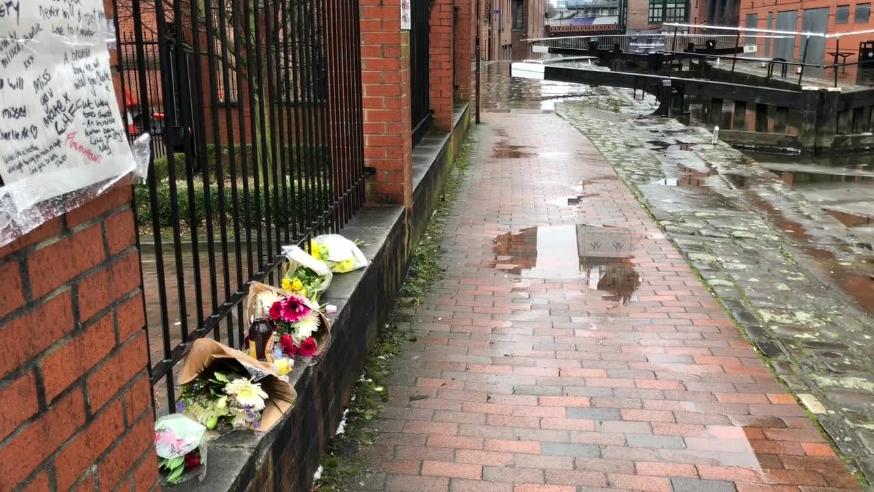 Some of the victims though did have something suspicious going on – like Tony Scanlon who was found in Ashton Canal in March 2007 with “cuts and bruises to his head”.

Another way we can examine what would happen if the Pusher was real is to look at just how they would be able to commit the murders without getting caught. Examining just how close the city’s canals are to many major night hot spots and areas, it seems that the Canal Pusher will indeed have been able to operate in some of the busiest areas in the city without arousing suspicion or even getting caught on some CCTV somewhere along the line.

When you have bars and restaurants and clubs in a city, you have CCTV – just ask anyone who’s ever been in trouble with bouncers on a night out. So if the Canal Pusher is real, they must be extremely adept at avoiding detection, both on the way to and after the act of pushing, to avoid the staggering level of CCTV in the city centre. 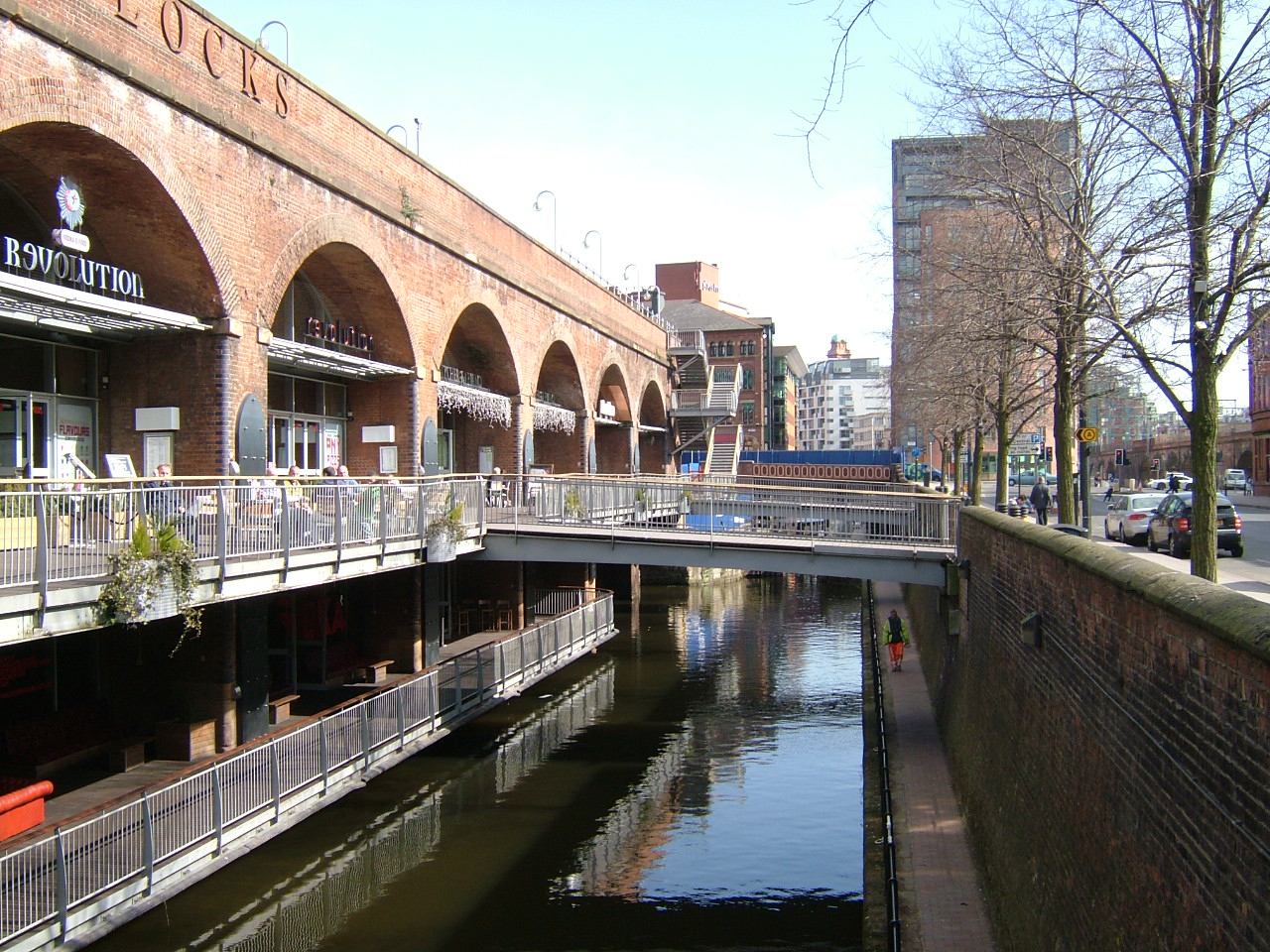 These crimes are not happening in some rural backwater – they’re happening in one of the most camera covered cities in the world – and to avoid detection for so many years is certainly impressive.

If the Canal Pusher is a real person, operating within the city for the past 11 years, and potentially killing nearly 80 people – it would be safe to assume that there have been many potential victims who managed to escape the pusher’s pushing.

Even a seasoned pro like Ted Bundy fucked up and allowed some girls to escape, later being able to identify him and ensure he was convicted. Are there any such incidents of this happening with the pusher? 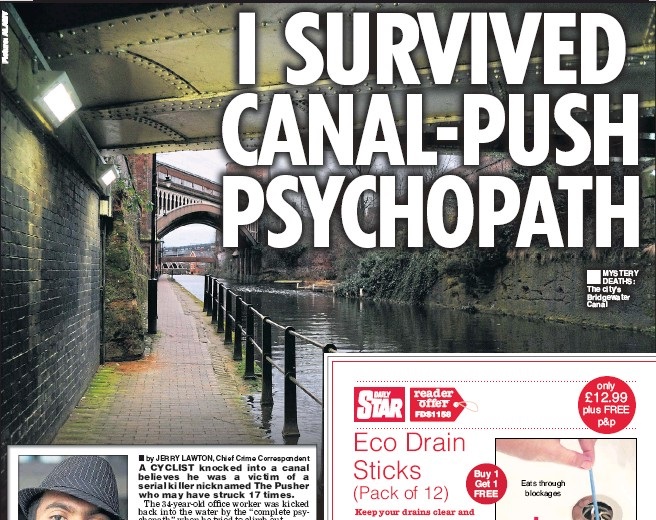 Well, yes there is. In April 2018, a cyclist was violently thrown into the canal at night by what he deemed to be a “psychopath who… even tried to stop me getting back out” After almost drowning as his legs became tangled up in his bike underwater, the ‘pusher’ ran off and the cyclist managed to get to the bank and pulled himself to safety.

The Pusher was described as a white male aged between 20-40, average height and wearing a black jacket. That pretty much describes around 30 million people in the UK, so not much help there then. But the question remains; could this person have been THE pusher that is responsible for so many other deaths in the city?

Police were quick to dismiss the incident as completely unrelated to the other deaths in the canal. There is absolutely no evidence to suggest or link the cyclist’s account of what happened with any of the tragic events which have been recorded over the last 11 years. 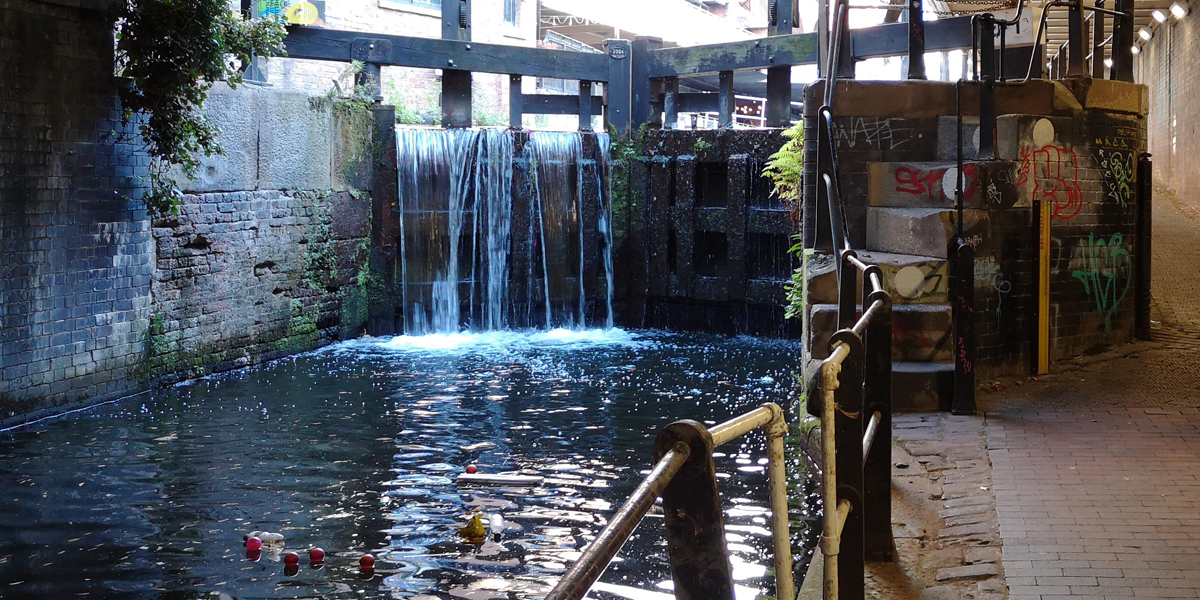 And so this is where the truth may be it’s clearest. First of all, and I know this from personal experience, many people can (and do) become extremely frustrated with cyclists riding down canal paths – seeing them more as a nuisance than anything else.

It may be that the person responsible for this attack was clearly looking to retaliate against cyclists in general, which is not in keeping at all with any of the other Pusher ‘victims’ who were all just walking.

If the Pusher doesn’t exist – what’s going on?

So what is causing so many people to fall into the canals and die? Well, the police and council are always quick to debunk any idea of a ‘pusher’, attributing most if not all of the deaths as tragic accidents – typically in part down to too much alcohol or drugs.

Sure, there may be a few incidents out of the 77 where it wasn’t an accident and something more sinister could have occurred, but someone getting mugged or beaten up and falling into the canal during the affray is much more believable than an actual serial killer stalking the city’s streets.

If the canal pusher was actually a real person who was responsible for nearly 80 deaths, they would be way ahead of the likes of Fred West (13 deaths) and Peter Sutcliffe (13 deaths) and Dennis Nilsen (15 deaths) in terms of victims. I’d think that the police would almost certainly be aggressively investigating probably the country’s most prolific serial killer if there was an ounce of evidence to suggest that they existed. 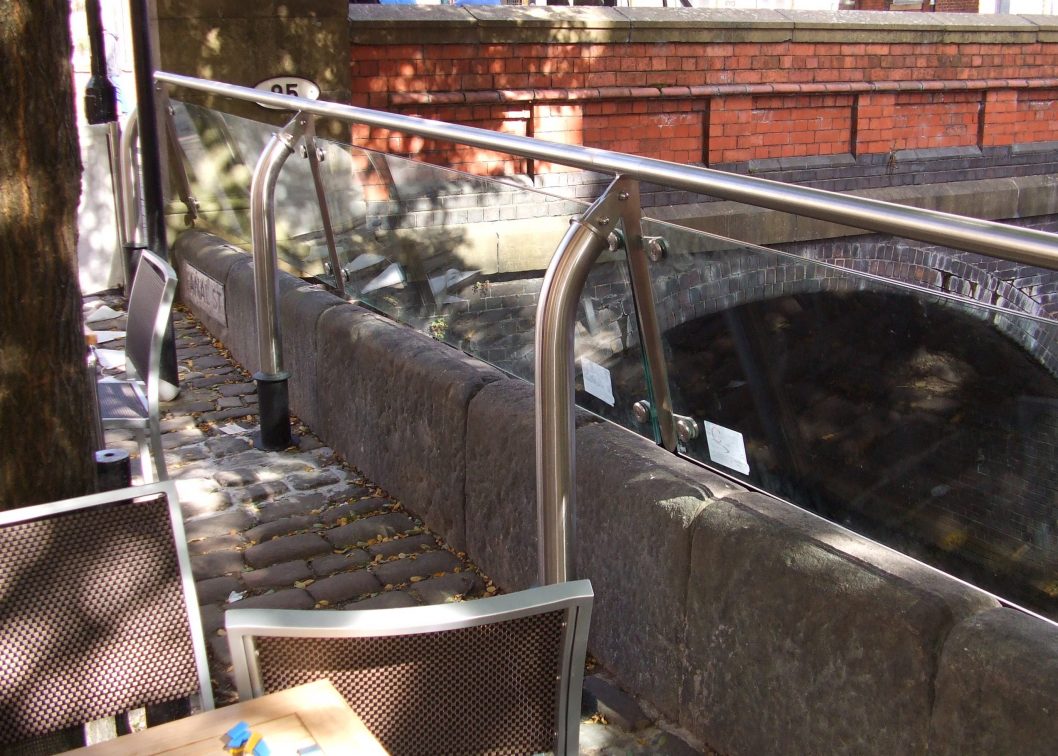 So if all of these deaths have been caused by alcohol and/or drugs – what can be done about it? First of all, I think it’s important to highlight that this isn’t an issue that is solely focused in Manchester. Between 2001 and 2015, there were 88 drownings in the canals of Amsterdam, while around 240 people per year are fished out of the River Thames in London.

Both of these cities have large canal or waterway systems right through the heart of them, where, just like Manchester, many of the city’s main nightclubs, pubs and bars are located – and it’s clear that these two certainly don’t mix.

Manchester has an extensive canal network which intersects some of the city’s busiest out-of-hours areas, with these sections of canal often suffering from inadequate lighting, slippy cobbles (especially in Manchester weather) and seemingly sub-standard barriers. 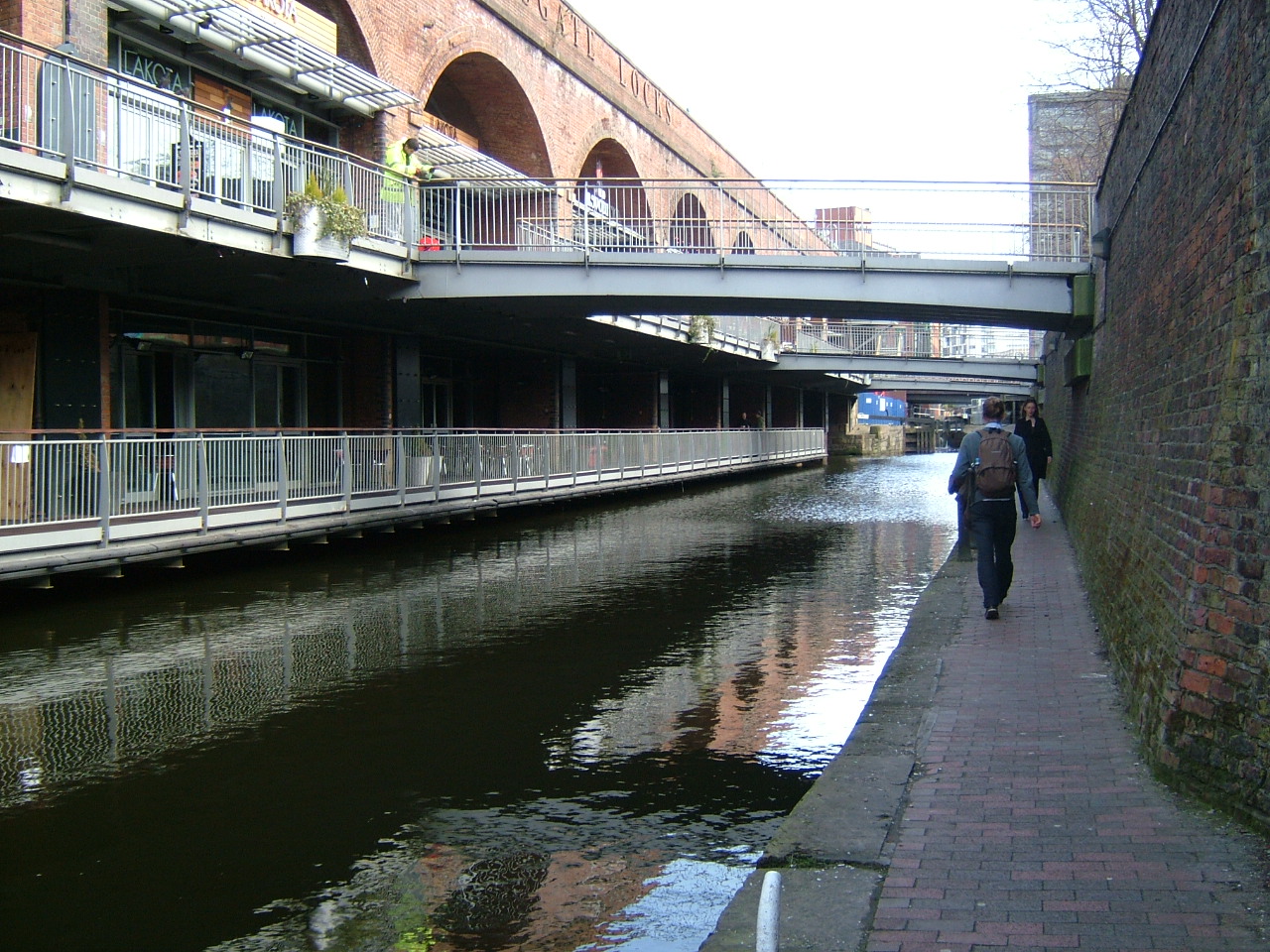 The fact that many of the victims are men speaks volumes too. The canal offers the perfect opportunity to relieve your bladder when you’re drunk – something which surely must contribute to the increased likelihood of men falling over and doing some serious damage to themselves when bladdered.

I think the idea of the Canal Pusher acts as a way for many people to cope with the fact that these deaths are merely just tragic accidents, ones which could have easily been prevented. Families and friends don’t want to hear that the death of a loved one was down to something simple – with the idea of a sinister pusher often giving meaning to something that doesn’t have one.

It’s a common coping strategy for humans, where we try to make sense out of something seemingly random and chaotic and make it part of something much bigger. The idea of conspiracy theories is certainly something that comes to mind, with people attributing events to certain false beliefs in the hope to bring an amount of control into a situation that is often out of their control.

The lack of any clear evidence, or indeed even a suspect leaves me to come to the conclusion that Manchester’s Canal Pusher doesn’t exist at all. But that doesn’t mean that you shouldn’t be careful – especially at night around the canals.

Look after each other and don’t even think about going down there after a few bevvies – no matter how good of a swimmer you are. Get an Uber – I’ll even pay for it for you.