The Symbol of the City: The Manchester Bee

The Manchester Bee symbolises solidarity and unity across Manchester since the Arena attack in 2017. It is a sign of strength, connection and pride as a response to the violence.

Since then, the buzz has spread across the city appearing on t-shirts, bags, umbrellas and even bodies. But the bee became a symbol of Manchester as early as the 1800s and it’s rather ironic really.

A small market town until late in the 18th century, Manchester became home to the first fully mechanised production process, importing cotton through the canal from Liverpool. The constant supply of power from the fast-flowing rivers in the Pennine hills made Manchester the best location for the revolution. Manchester became a ‘hive of activity’ during the Industrial Revolution, home to thousands of ‘worker bees‘.

The city became a distribution centre for cotton and yarn as cotton mills and associated factories such as bleach and textile print works spread rapidly throughout the centre.

The industrialisation of Manchester put the city in the top 3 most populated cities in the UK. 10,000 lived in Manchester in 1801, this doubled by the 1820s and by the end of the century 400,000 people inhabited the city.

The ‘Hive’ bustled, mills paid well and even employed children. Families from the countryside moved to the centre and saw a rise in their incomes as everyone in the family now worked. Of course, this brought about a wide range of social problems from child labour and deathly jobs to the creation of the working class.

The workforce, made predominantly of women and children, worked up to 16 hours a day with as little as scraps of bread and porridge to eat. Naturally, disturbances began to happen, workers demanded a minimum wage and took to the streets, riots began and the ruling class became bloody terrified of a revolution.

Ironically, the symbol of production and prosperous growth lead to the destroying of the environment and real-life bees are now an endangered species due to smog and pollution.

It’s been many years since the machinery fell silent and many of the city’s flats are renovated mills including Beehive Mill in Ancoats. At the peak in 1853, there were 108 cotton mills and by the mid-19th century Lancashire’s cotton industry was dubbed ‘Cottonopolis’, now the name of a popular bar in the NQ.

One of the earliest visual representations of the Manchester bee comes from the city’s coat of arms. Granted to the city in 1842, the crest has a classic design and depicts a city of global trade through the ship and industry through the bees.

It demonstrates a city built on bravery shown by the lion and a city filled with peace and harmony due to the use of the antelope. The symbol has been used by the city ever since.

Manchester Civic Week spread over the city in 1926 to stimulate industrial expansion to attract manufacturing facilities to the city and also to celebrate the new beginnings of Manchester. The events began with a parade including 350 vehicles.

In commemoration of the week, a large number of bronze medals were available with a Manchester Bee in the middle. Word on the street is there are still a few that pop up on eBay every now and then if you look hard enough. Although the medals seemingly had no proper use, they have helped stick the bee as a symbol of Manchester.

The Co-Operative Group also had a part to play in the historic symbol and is the reason it decorates so many Mancunian buildings. The original store had a beehive incorporated in the architecture and so it was subsequently included into the stonework in new Co-Op buildings.

It became a core part of the business, emphasising collaboration within their ethos. The Co-Op’s HQ just outside of Victoria Station is a £105million, sustainable centrepiece powered by the ‘buzz’ and ‘dance’ found within a hive.

In 1990, Boddingtons known for the infamous ‘Cream of Manchester’ ad campaign, added two bees to its logo to strengthen its link to the city. Brewed in Manchester since 1778, Boddingtons Brewery closed its doors in 2004 but there are still some signs left dotted across the city.

The bee symbol can also be found on the old HMS Manchester and The University of Manchester’s coat of arms. Otherwise, the symbol almost faded away.

Until 2014, when the council set to clean up Manchester. 600 bins with a distinctive honeycomb design and luminescent bee logo were commissioned and the Manchester bee was quickly popularised again.

Actual real-life bees were also reintroduced into the city centre with 4 hives on the top of The Printworks, home to almost 250,000 bees. In 2015, jars of the limited edition honey with labels from Mancsy were sold for as much as £75.

King Street, formerly the large banking area of Manchester is home to one of the greatest concentrations of bees in the city above doorways and on walls. The symbols include beehives, Salford’s coat of arms, Lloyds Bank old logo, Manchester Ship Canal Company’s coat of arms and Manchester’s coat of arms.

The Gardens in St Ann’s Square has oversized bees mounted on medallions, bees can also be found on the mosaic floor of The Great Hall in the Town Hall and painted across the side of Koffee Pot in the 22 bees mural.

A pretty sneaky bee is found on every quarter hour of the Principal’s clock if you look closely enough.

Following the terror attack at Manchester Arena, the bee was reimagined. It became a symbol of unity, of a city never giving up.

On the anniversary of the attack, The 22 Bee Project covered the city with bees. Over 150 businesses are involved, allowing them to show their support. The project set out to symbolise working together, demonstrate a city of solidarity and raise money for the families affected.

Today, bees as the imagery of Manchester is known worldwide. The message held within the bee has grown and been adapted over time, just as the city has changed.

What was once a symbol entrenched in the industriousness and a hard work ethic now depicts the harmonious union of the Manchester Hive. It is a symbol of hope, growth and solidarity. What has remained the same for hundreds of years is the association of the city with perseverance and teamwork demonstrated by a beehive. 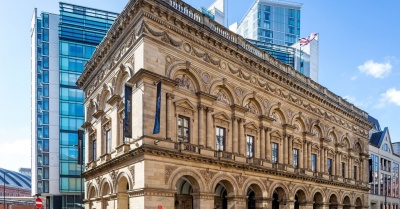 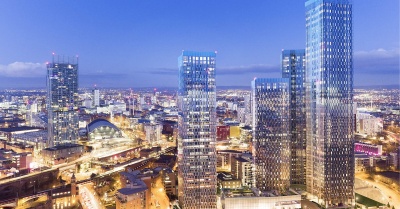 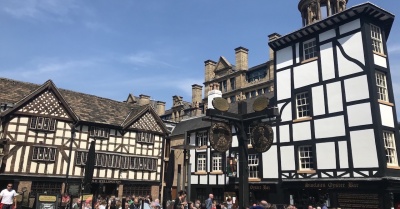