What is a DeLorean, Batmobile & Ghostbusters Car doing on an Industrial Estate in Dukinfield? 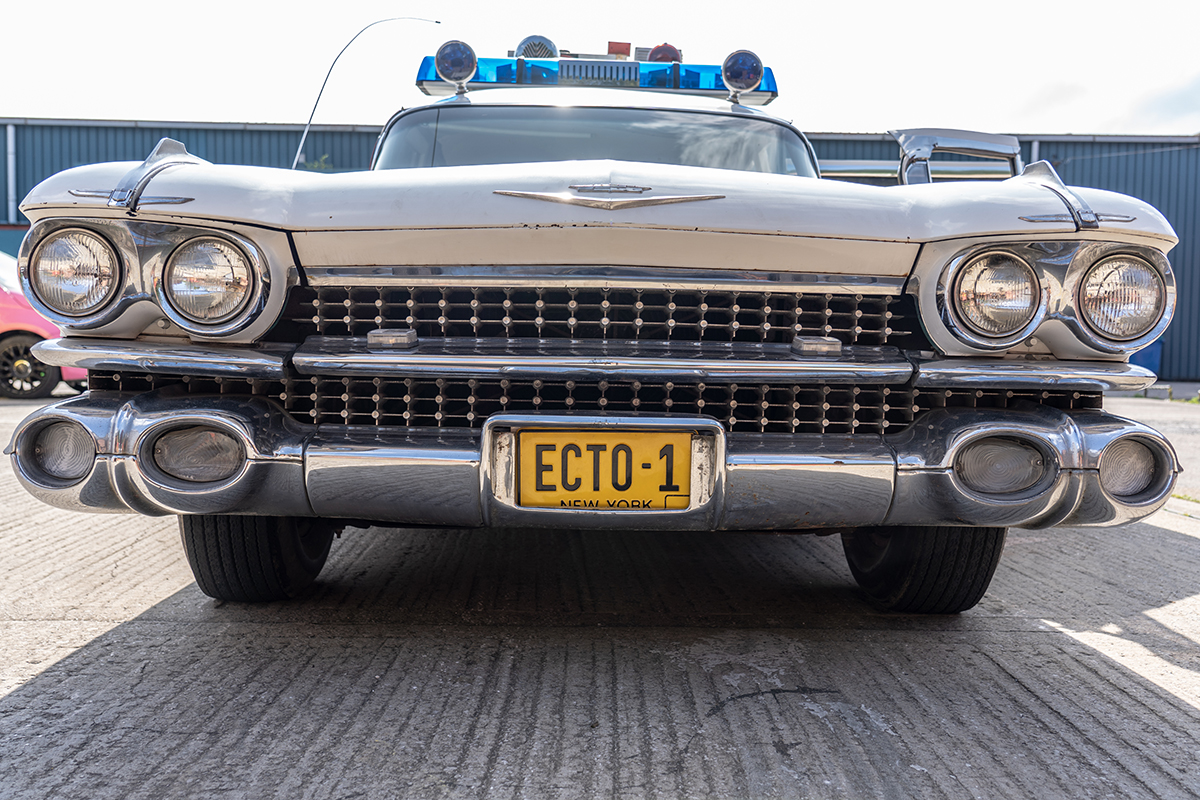 There were 3 things that I loved as a kid. One was the Turtles – as in the ‘Teenage Mutant Hero’ ones, another was orange squash – which I drank all day every day, and the final one was GHOSTBUSTERS.

My mum must have taped it off of the telly one night, and marvelled at how a film about a bunch of blokes chasing crappy looking ghosts could entertain a child over and over again – leaving her free to relax, file her nails and nip down to the shops.

If I’m being honest – I still love Ghostbusters – it’s an ace film, still stands up today and I’m really very excited about the impending release of Ghostbusters: Afterlife in a couple of weeks.

Anyway, during a routine search online for a pink Cadillac for my wife’s birthday, I unearthed a hidden gem all the way over at a seemingly normal industrial estate in Dukinfield. Coopers Classic Cars actually have a Ghostbusters car and the best thing about it – you can hire it out! 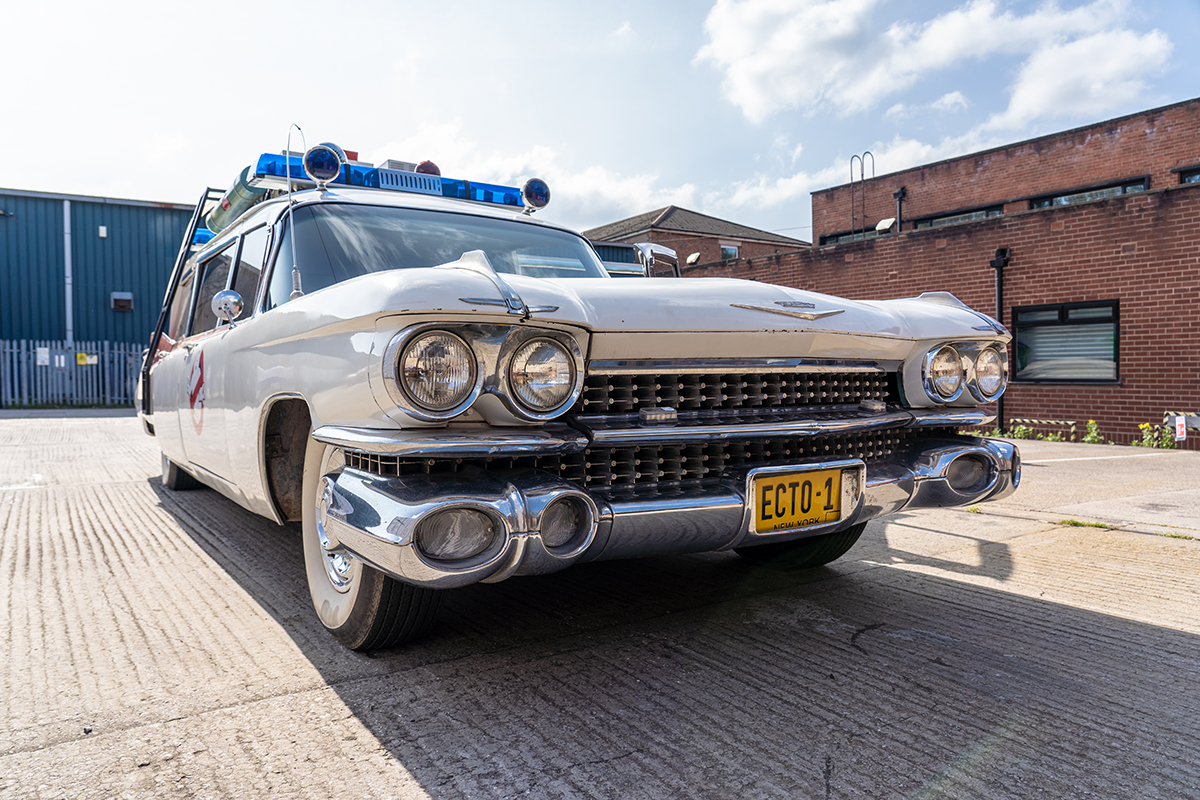 So, naturally I took the train down there on a Saturday morning to see the bloody thing, hopefully have a drive in it and see what else they had.

The Ghostbusters car is truly iconic, and certainly one of the most famous movie cars of all time, up there with the Back to the Future DeLorean, Knight Rider and that Dog in Dumb and Dumber. It is in actual fact a heavily modified old ambulance, a 1959 Cadillac Miller-Meteor Futura Duplex, with a load of bits added to the top, a sweet paint job and plenty of polished chrome. 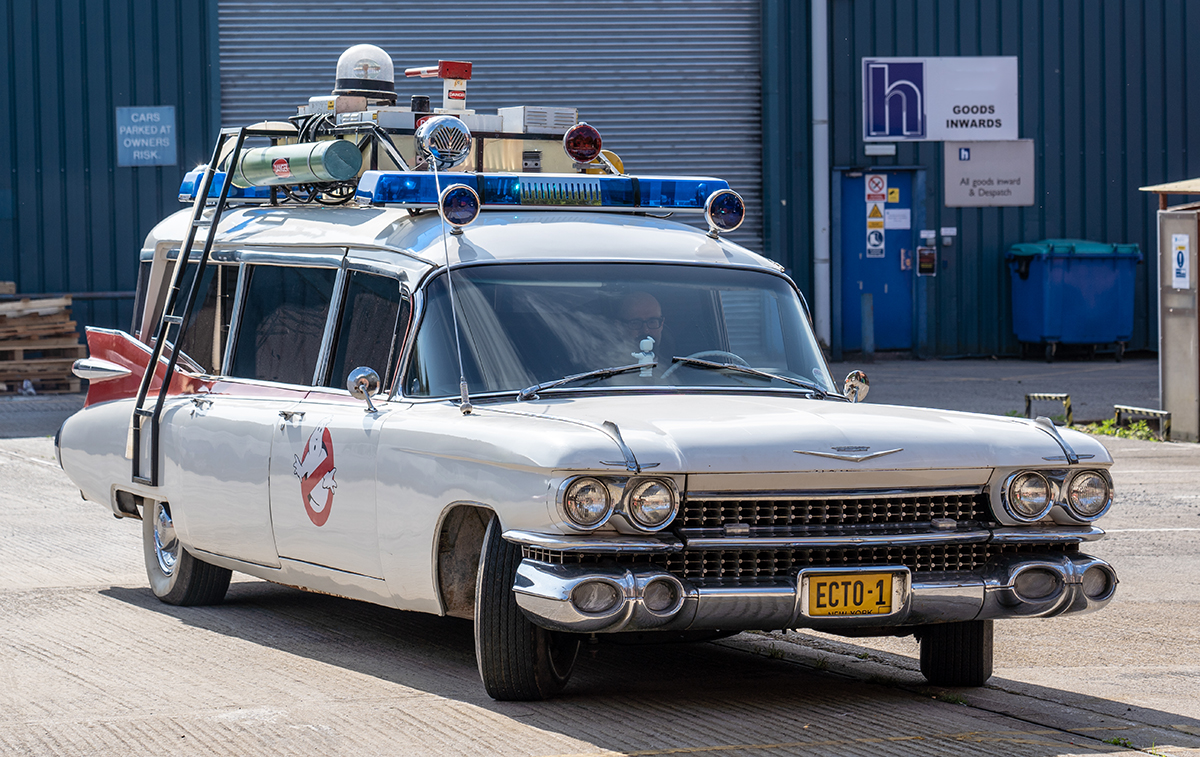 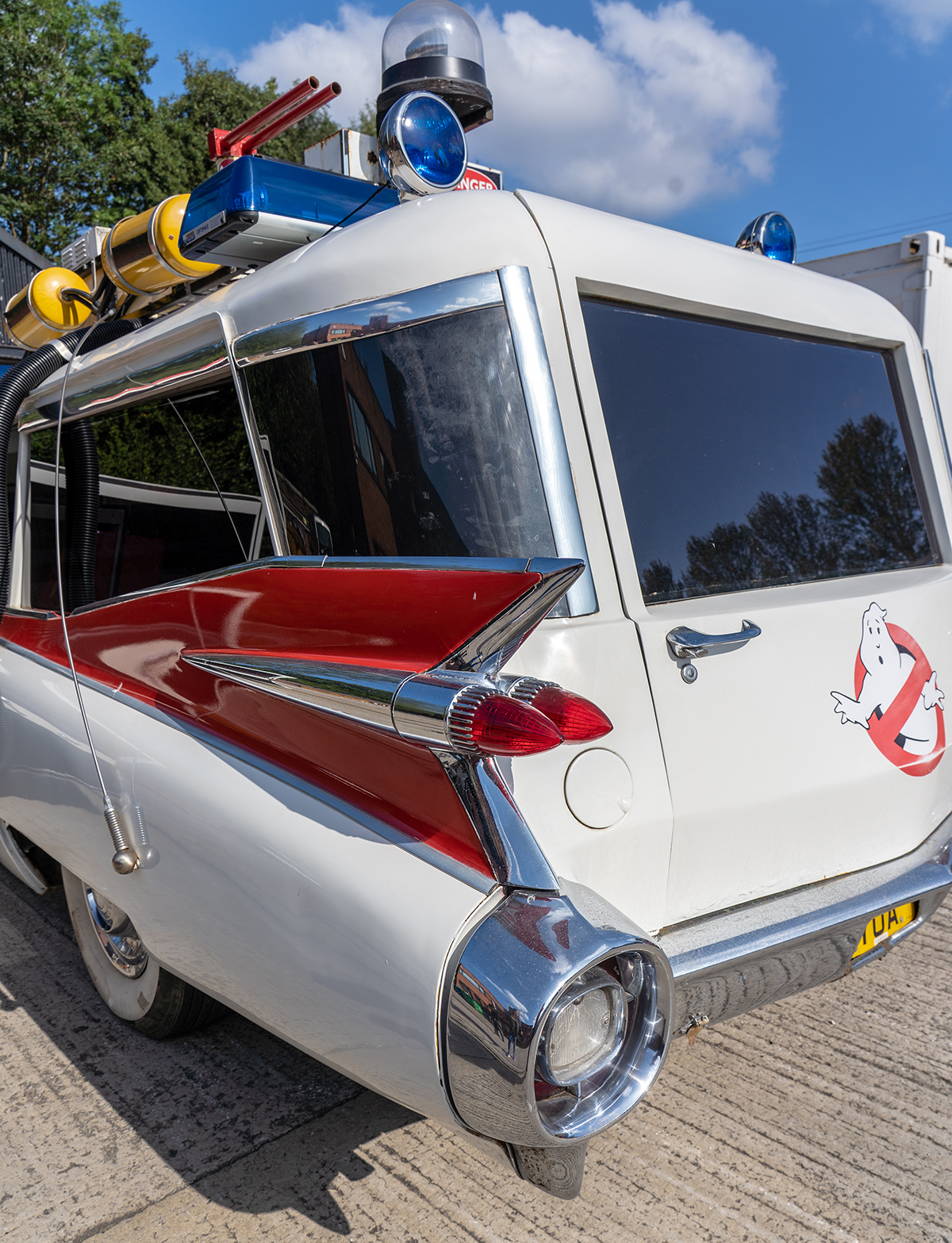 Available to hire for any event you can think of – who wouldn’t want to turn up to prom in this?! Or rock up to church in your wedding dress, sirens blaring and everyone singing that Ghostbusters song by Ray Parker Jr.

The Ghostbusters car itself was bought from a fella in Ramsbottom a couple of years ago, who actually bought it at auction from a bloke who had it shipped over from the states around 10 years ago. Eagle-eyed readers out there will notice that it’s not actually a Miller-Meteor, but instead rarer S&S ambulance – but still with all the signature chrome fittings and THOSE iconic tailfins. 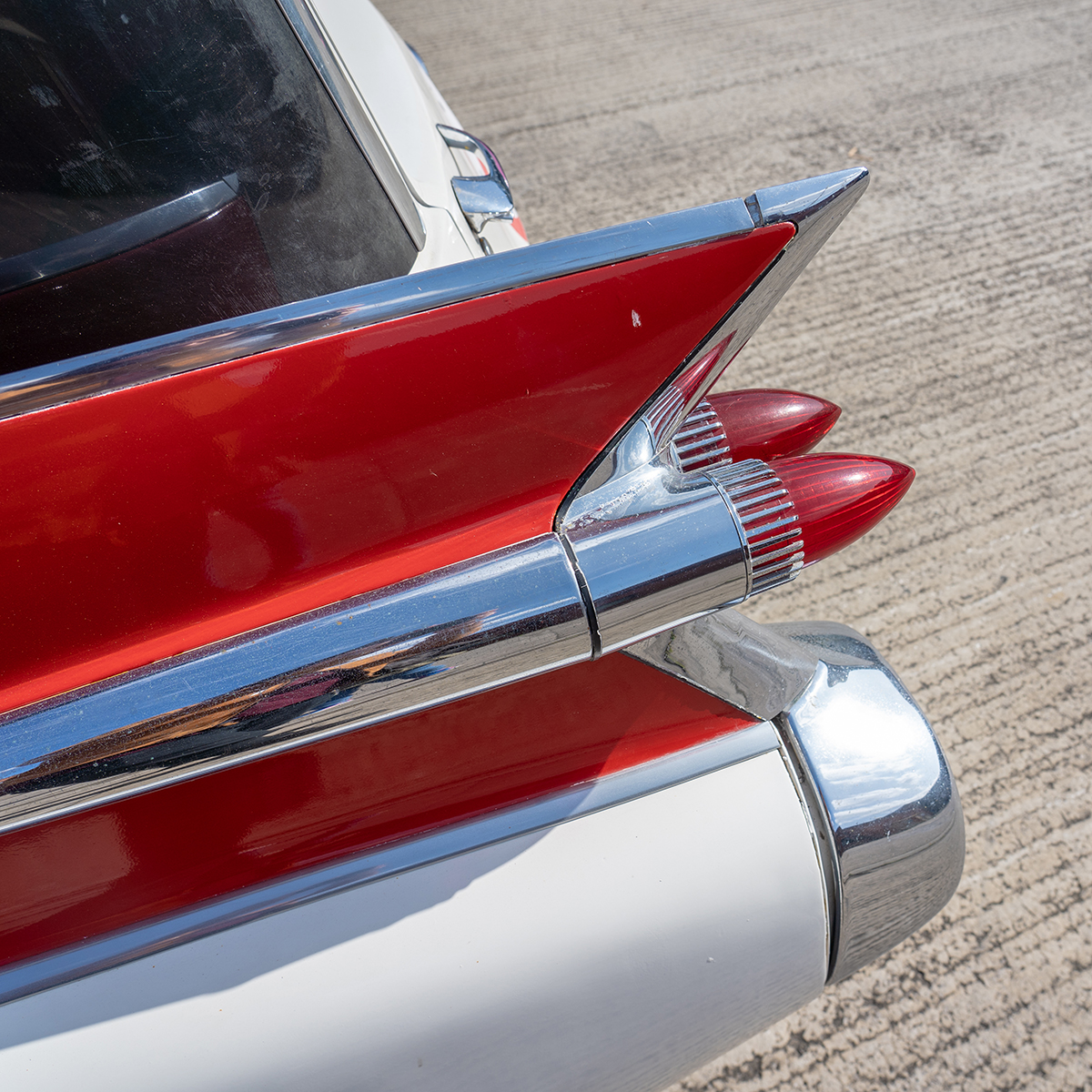 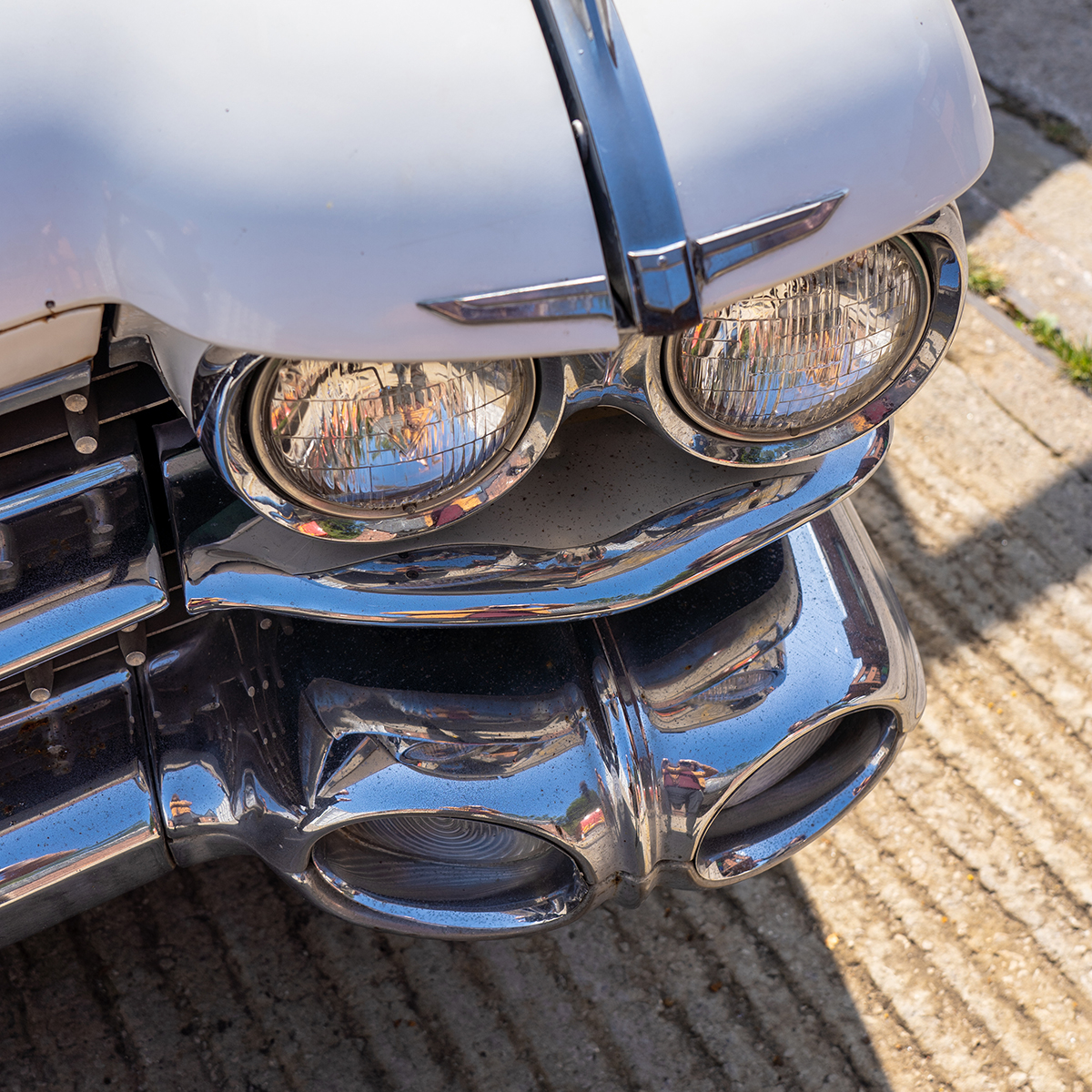 The ECTO-1 isn’t the only car that Coopers have in their garage though. Oh no.

They also currently have or are restoring a whole host of other movie and TV cars, including a 1982 Pontiac Firebird Trans Am (Knight Rider), the A-Team Van, a Ford Gran Torino (Starsky & Hutch), a DMC DeLorean from Back to the Future and even a Batmobile – the sexy one from the 1989 movie! 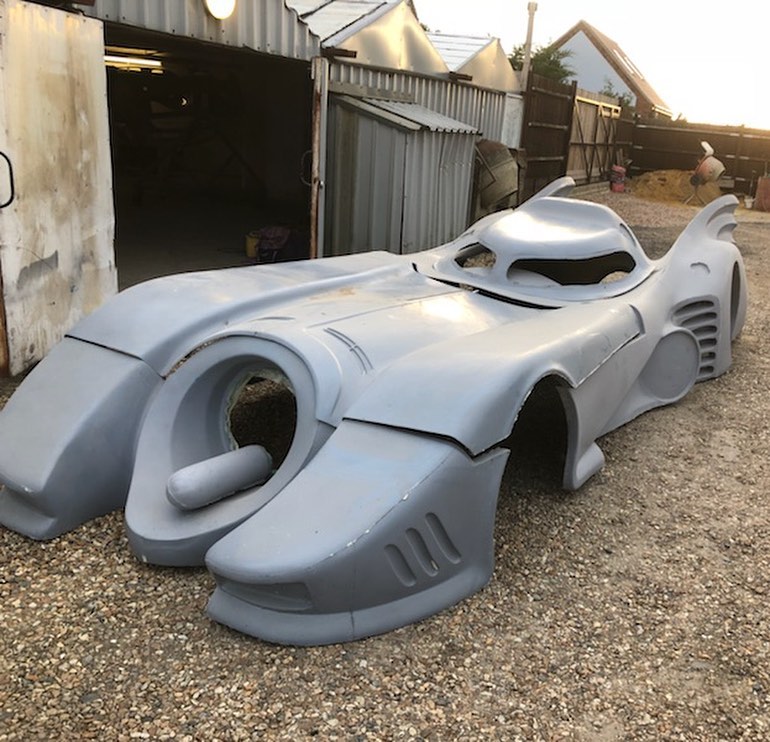 The garage is also home to of one of the most famous cars in British history – Del Boy’s 3-wheeled van from Only Fools and Horses. In fact, their van was once owned by a fella who drove it all the way to the Costa Del Sol on a ‘Cannonball Run’ – only to lose interest and decide to leave it there in a bar owned by his mate. 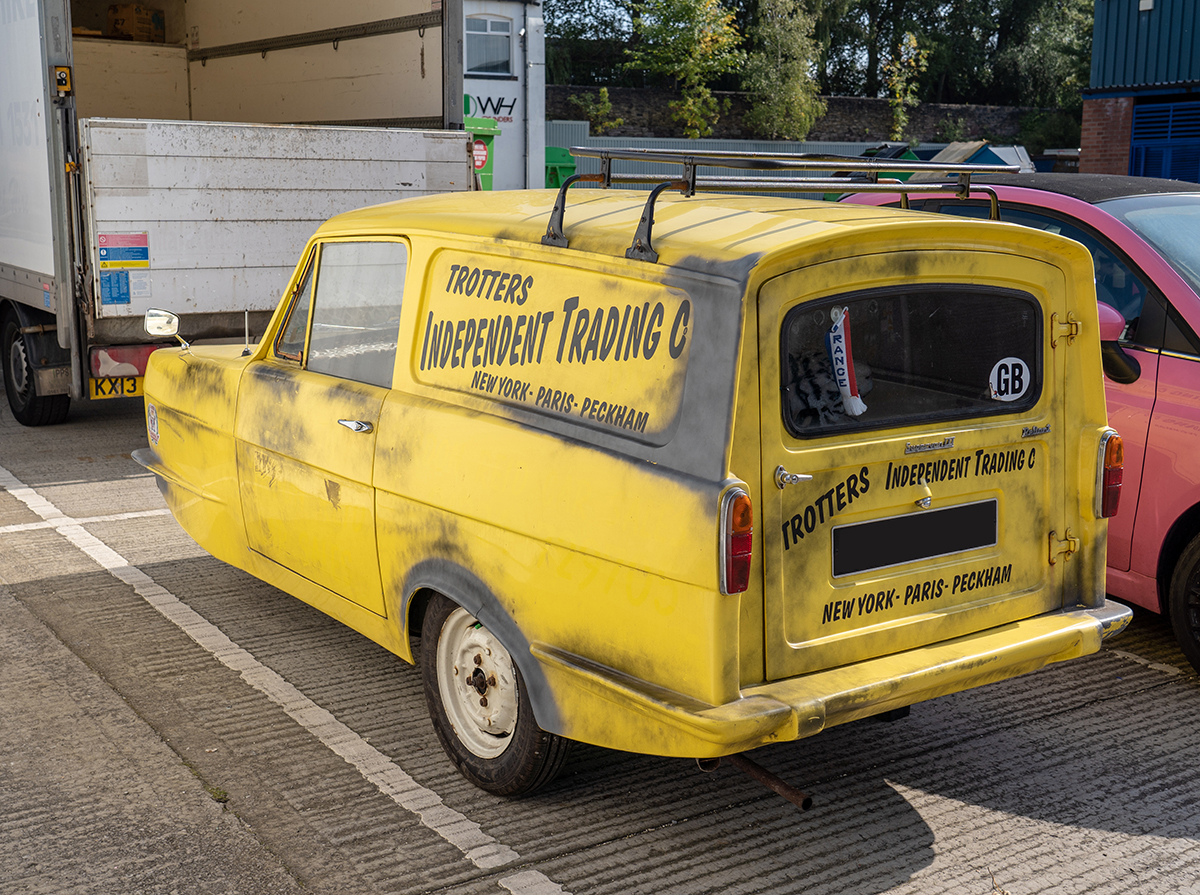 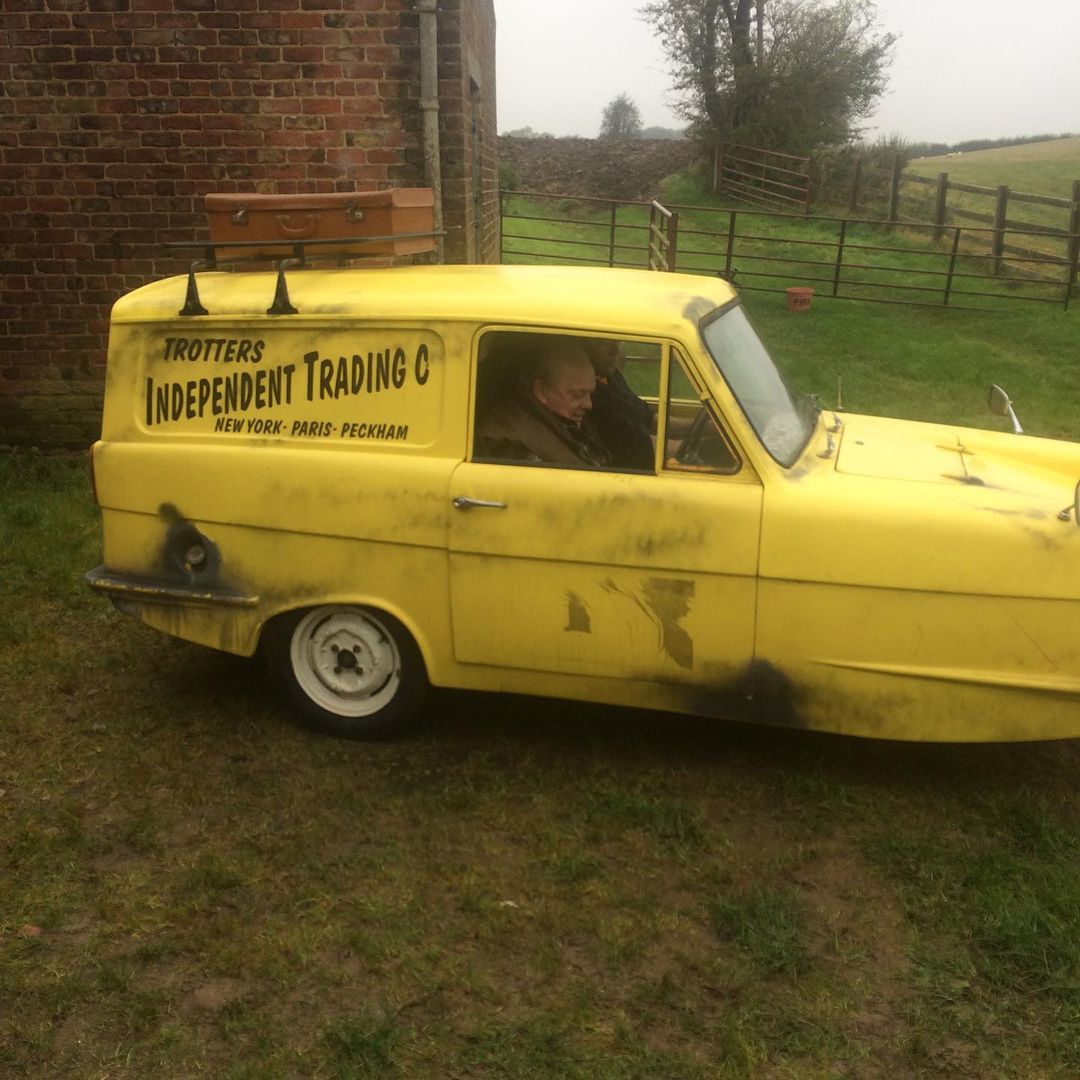 Del Boy in the van there

A couple of years down the line though, he wanted it back so had it trailed all the way back from Spain and then sold it to Coopers. It’s actually been driven by Del Boy too – well, David Jason who drove around in it last year for his TV show ‘David Jason’s Great British Inventions’.

The pride and joy of the garage though is the WORLD’S ONLY known surviving 1956 Pontiac Ambulance built by National, which they’ve started painstakingly restoring to its former glory. The ambulance hails from the tiny town of Gig Harbour in Washington on the North West coast of the US. 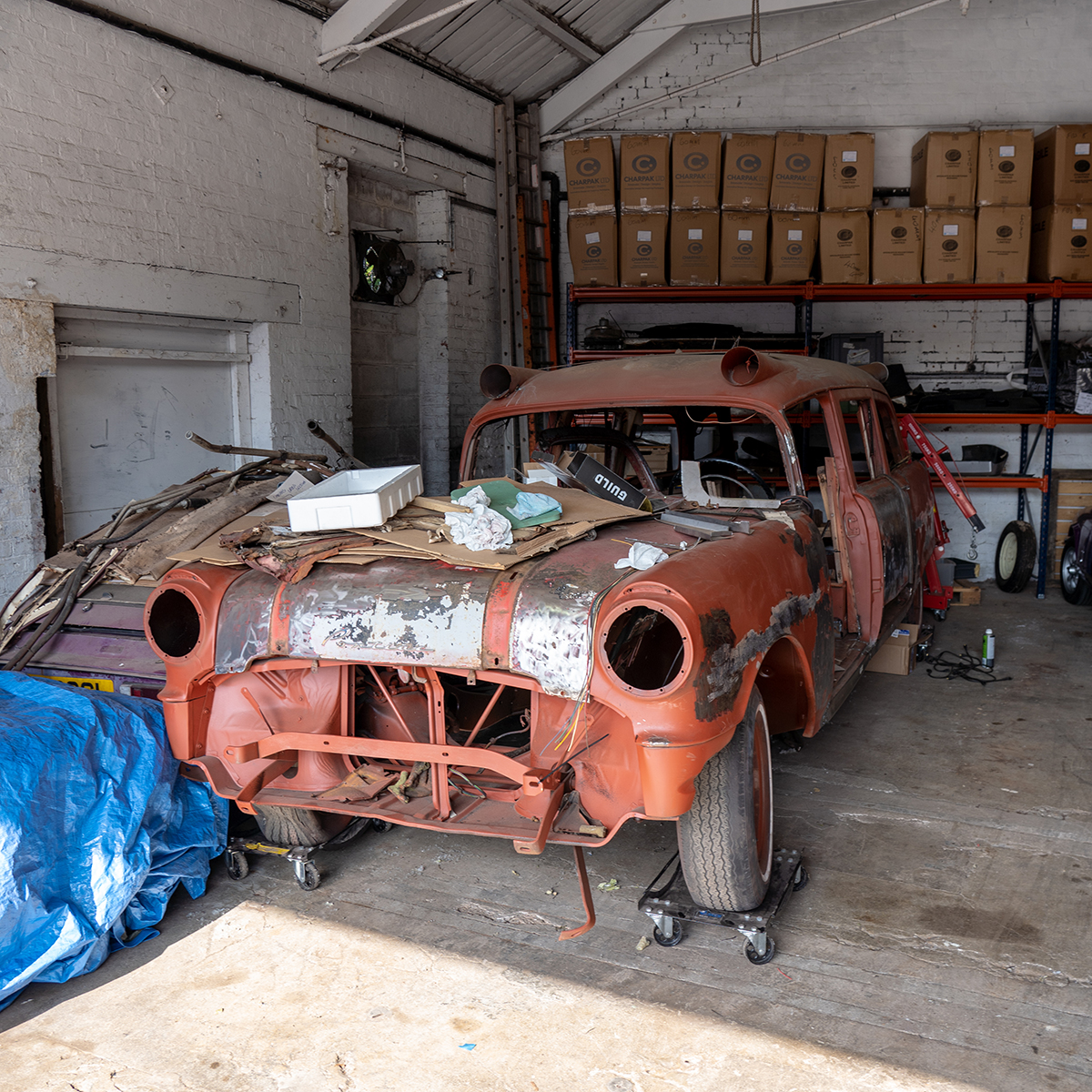 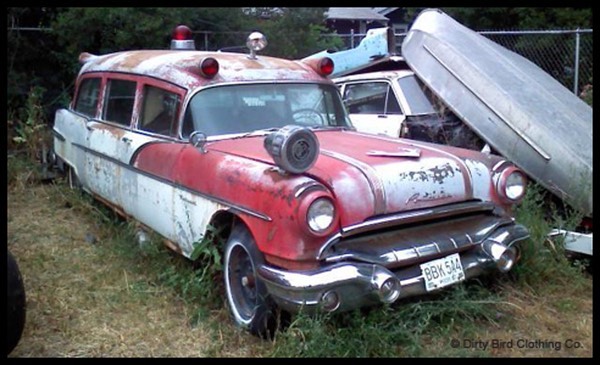 Once belonging to the Sheriff of the town, the ambulance will have been used back in the day as a way of transporting any sick people to the hospital, but driven by the Sheriff’s family instead of a paramedic and trained medical staff you see today.

As the restorations continue, and more cars start to take shape and get finished, Coopers will be adding their accomplishments to their list of vehicles to hire – a list that’s growing rapidly. 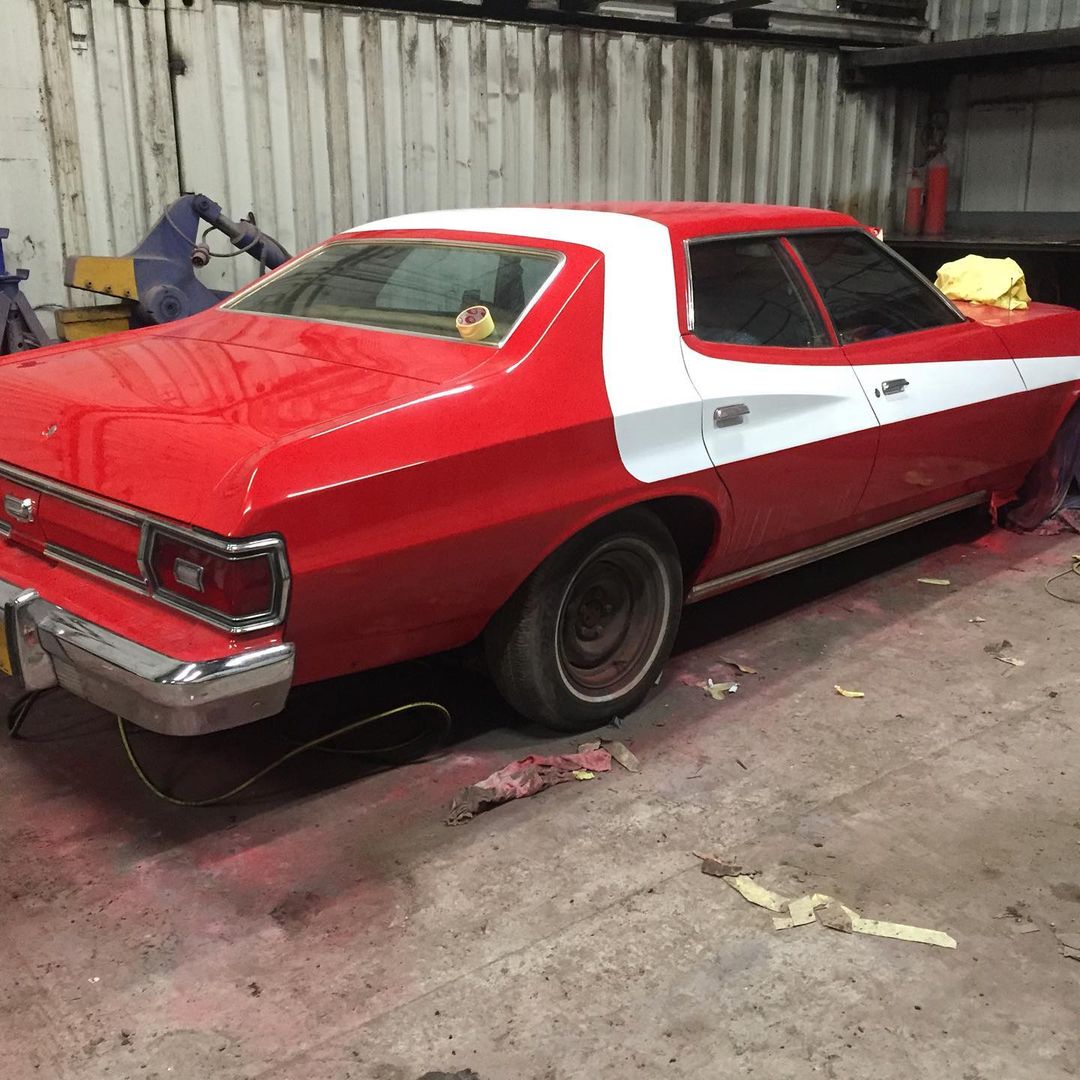 As well as the Ghostbusters car you’ll eventually be able to get driven to your prom in Knight Rider, go for your 30th birthday party in a time machine or just head down to the local shops in Del Boy’s 3-wheerer!

Follow the progress of the restorations at Cooper’s Classic Cars