What is going on with Shrek's Pizza in Wythenshawe? 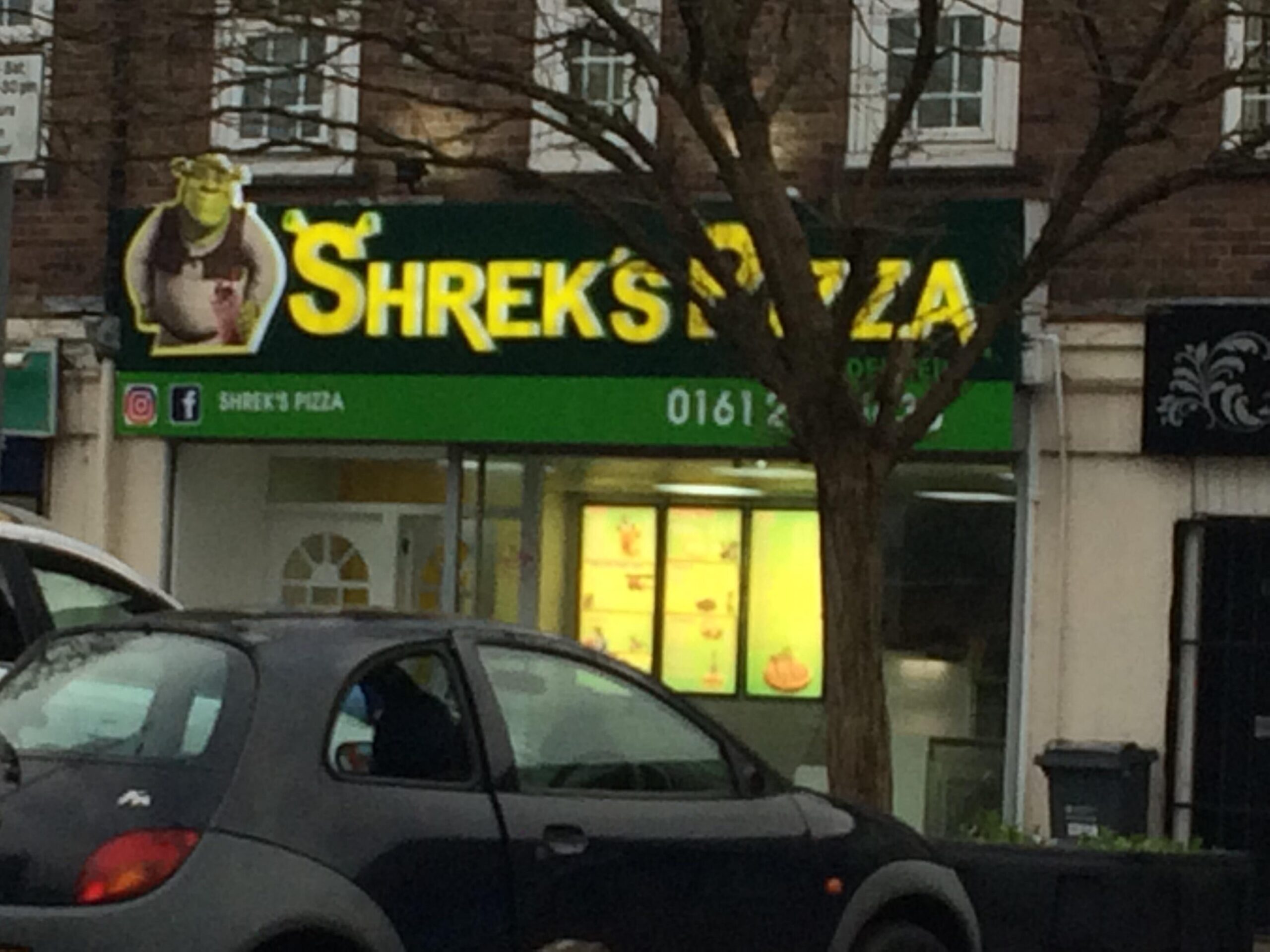 The internet is a truly odd place. Sometimes things happen that people have absolutely NO control over, and then there’s very little in the way of an explanation afterwards.

There’s been some proper weird things happen thanks to the Internet, and over the past year of so – something monumental has been happening to a (now closed) pizza shop down in Wythenshawe – and if I’m being honest – I’m still none the wiser with what has actually occurred. 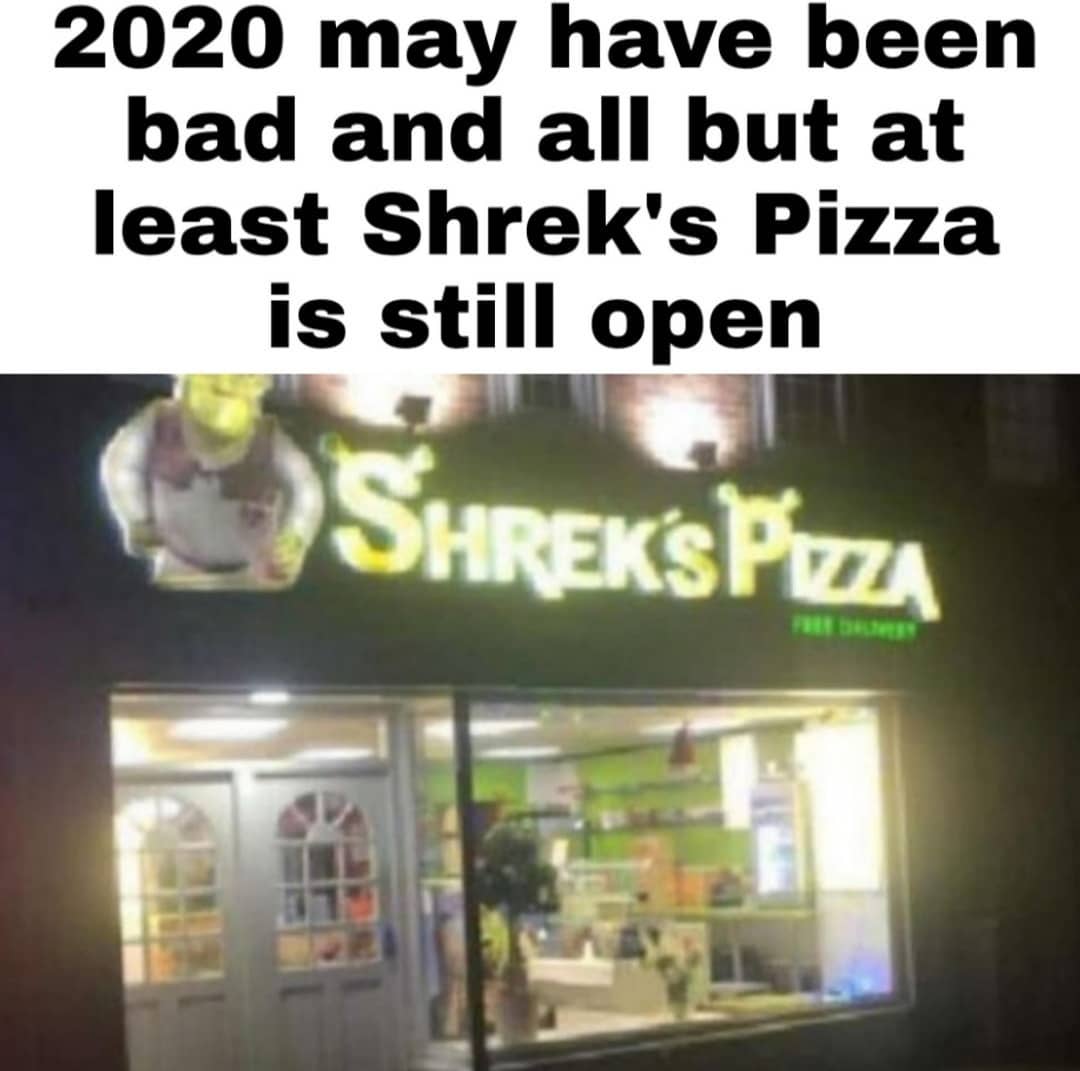 The first point in this mysterious tale is the pizza shop’s name: Shrek’s Pizza. In fact – that’s the ONLY point.

Seemingly the only reason this whole debacle happened, as soon as word of Shrek’s kitchen exploits got out – the Internet went fucking crazy – turning a random greasy kebab shop in Wythenshawe into a worldwide meme sensation.

In a sea of ‘Godfather’ and ‘Pinocchio’ pizza joints – Shrek’s gained notoriety across the globe – and even though it’s now closed – there’s still plenty of people wanting to come and visit. 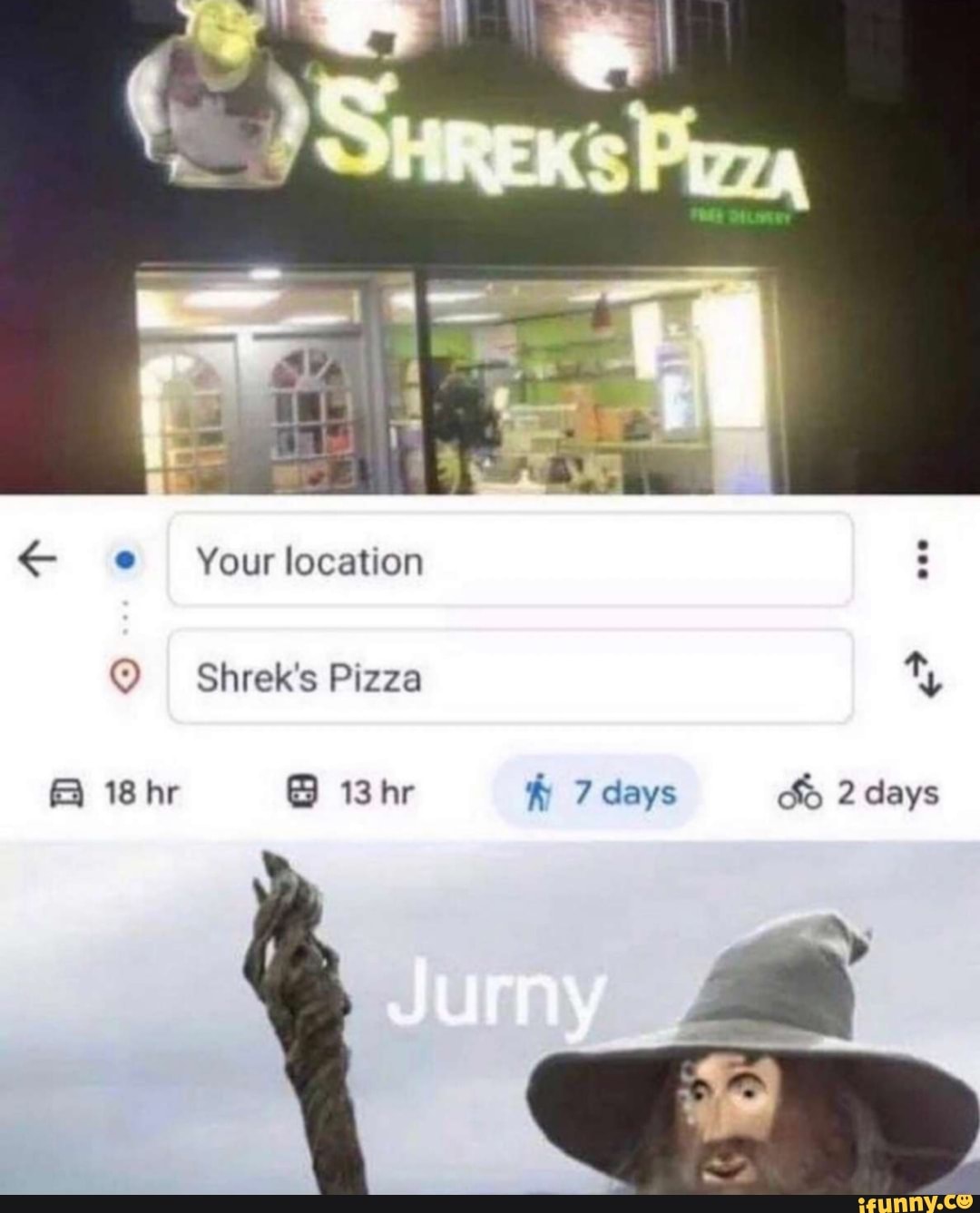 If you search for Shrek’s Pizza on Google you get 2,574 reviews – every single one of them for 5 stars. Was Shrek’s REALLY that good? Unlikely.

Here’s just a few of the reviews…

⭐⭐⭐⭐⭐
AMAZING! MUST GO THERE! I was sick for many years and one day I ate it and was cured. This place was the best you need to have the boiled eyes. Trust me. – Natalia Arguello

⭐⭐⭐⭐⭐
Had my child’s christening here, it was stupendous. Plenty of pizza but no where near enough Shrek. My child wasn’t very happy with the choice so I left with a full belly and childless. 10/10, very shrekxy atmosphere. – K D

⭐⭐⭐⭐⭐
I went here the other day and as soon as I walked into the place I began crying uncontrollably as the demons began to exit my body. It seems that after decades of hurt and torment my final release happened at Shrek’s Pizza in Manchester. I can now live a happy life and I recommend good pizza also Shrek was there and that was fun so you should visit. – Hee Hee

⭐⭐⭐⭐⭐
Shreks himself greeted me at the door, welcoming me into his humble abode. A magnificent experience to say the least, my very life force was restored at this divine establishment. You will never want to leave this grand restaurant. It will give you a feeling of pure extasy, comparable to seeing the dvd logo hit the corner of the screen. They have live performances nightly, from celebrities such as Shaggy , Elon Musk, Thanos and many more. –Will Douglas

Shrek’s Pizza also became a bit of a sensation on YouTube – the epicentre of shite memes on the Internet. There are a couple of (badly made) videos on there – mostly featuring terrible graphics, bad music and too much talking to the camera – and nowhere near enough pizza or even Shrek.

Oddly enough though one of them has 76,000 views – and all it is some nerd using Google Maps to find it in Wythenshawe and then lose his shit. I’m sure this is pretty funny for 16 year olds on there – but for me, a 35 year old man, not so much.

As I said – Shrek’s Pizza is unfortunately now closed for good. So if you fancied going down to have a Swamp Pizza – you’re out of luck. 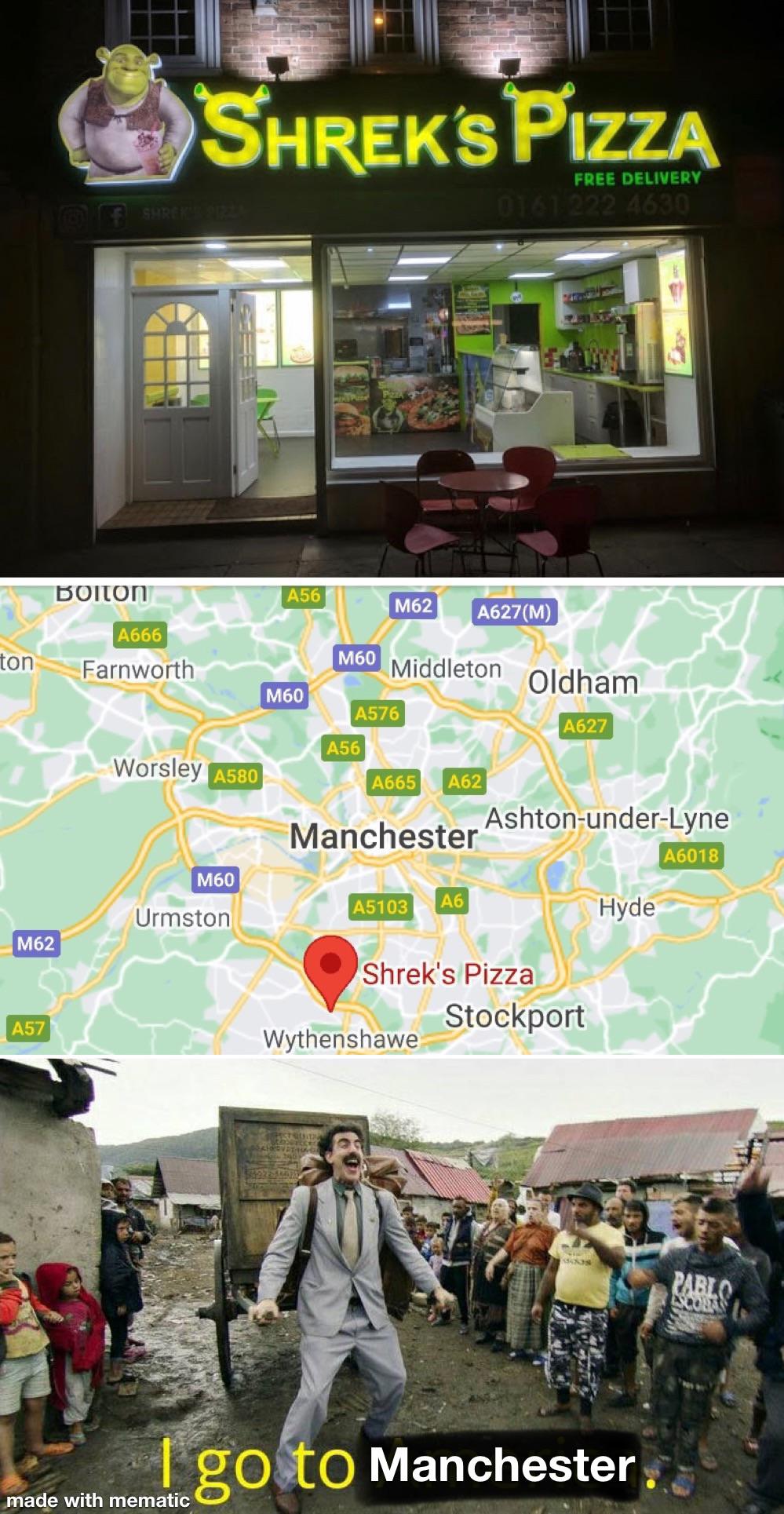 Not that the menu even offered up anything Shrek related in the first place. The only mention of the green monster was a special pizza that they had, imaginatively named ‘Shrek’s Special‘ and featuring salami, sausage, mushrooms, green peppers, red onions, ham, pepperoni and sweetcorn. Doesn’t sound half bad that to be fair.

Also on the pizza menu was ‘Exciting Vegetarian‘ although I’m not sure what ingredient elevated it to such levels of excitement, and the obligatory ‘Donner Pizza‘ which is always a good indicator of the exceptional quality of a pizzeria. 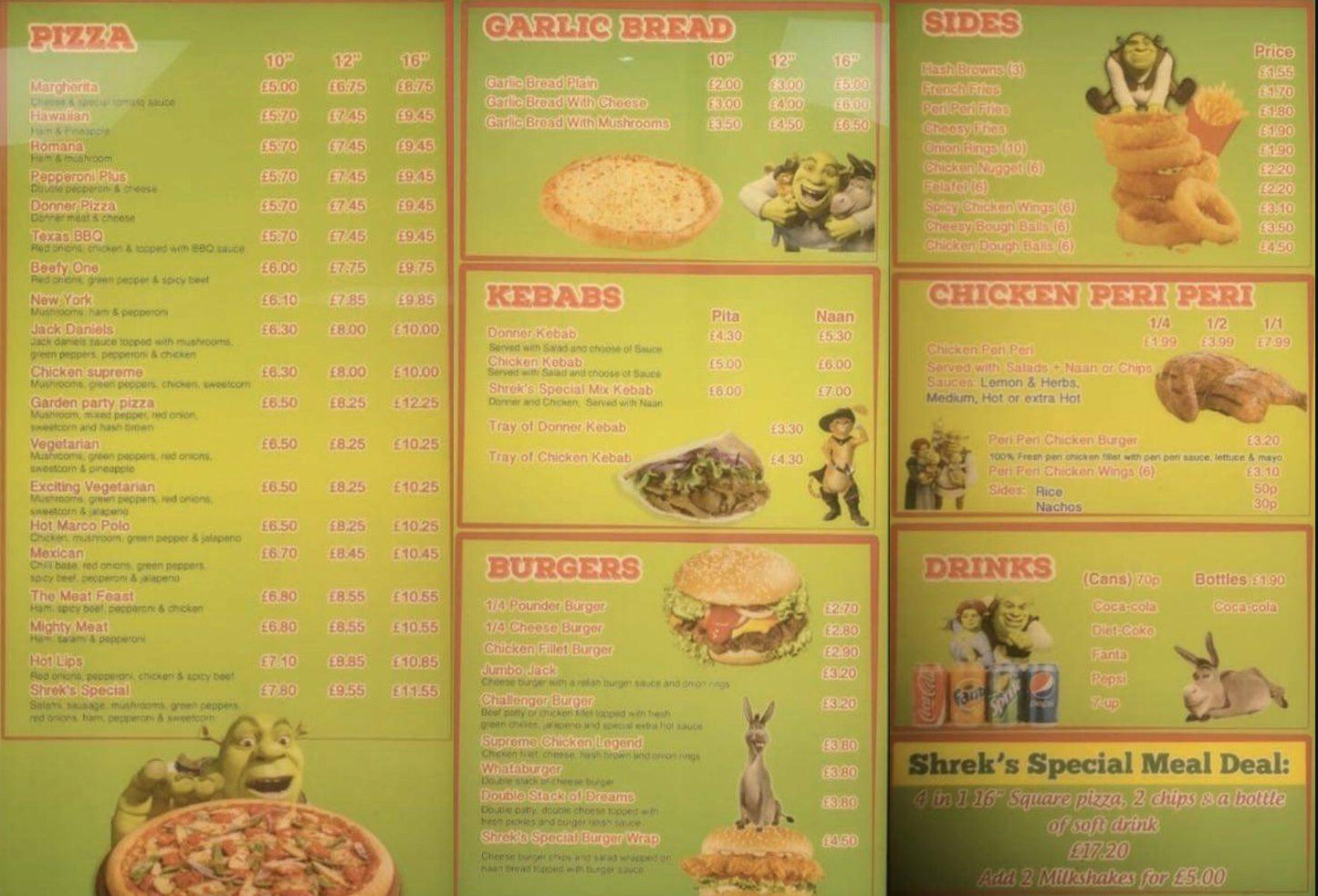 The fact that the owners never thought to do a ‘Donkey Calzone‘, or ‘Swamp Chips‘ just seems like a missed opportunity to me and a huge shame. Hopefully if they ever open up a new kebab shop elsewhere they’ll go further with the theme than just a logo that looked like it was made on MS Paint.

The Best Places to Watch the Euros 2021 in Manchester