Knickers Nailed to the Ceiling & REAL Coffins as Tables: What Happened to Tommy Ducks?

Probably the most infamous pub in the history of Manchester. 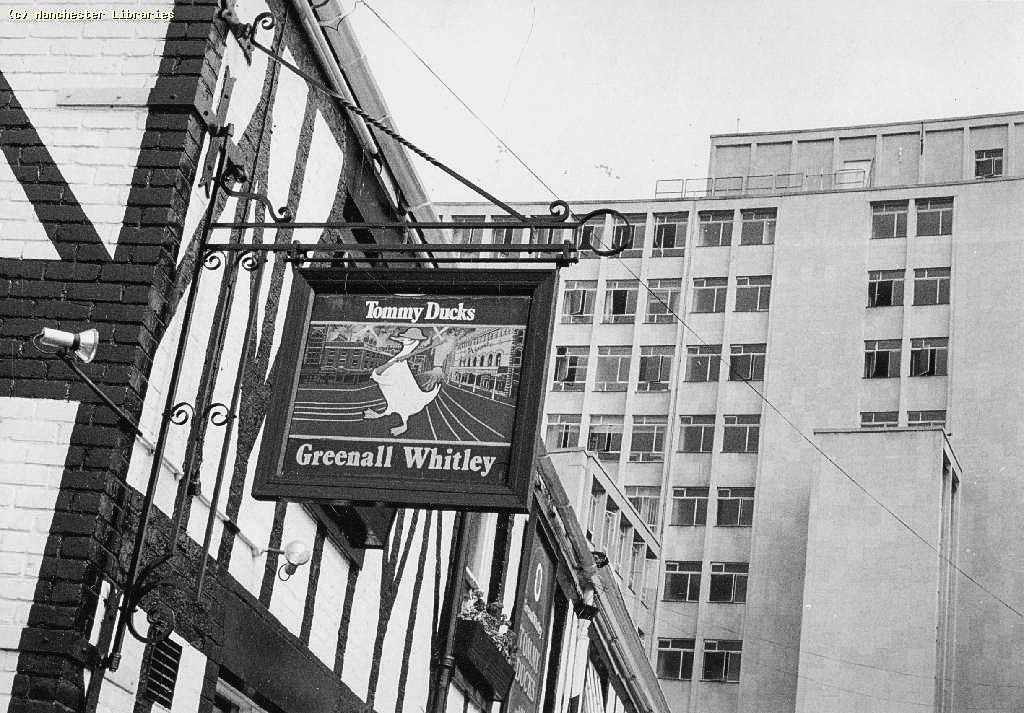 A legendary boozer slap-bang in the centre of the city, Tommy Ducks was demolished under cover of darkness back in 1993, and since then the venue has achieved almost mythical status.

There are so many stories and urban legends surrounding this place, so I thought it would be good to try to separate the truth from the bullshit and find out what it was actually like to drink in there and why exactly it isn’t around any longer.

Many agree that a pub stood at the site of Tommy Ducks from as early as the mid-19th Century, but the actual date in which the boozer opened is up for debate. An early 1819 map clearly shows a row of houses where the pub was, and it may be the case that one of them was being used as a public house, but we’re not too sure. 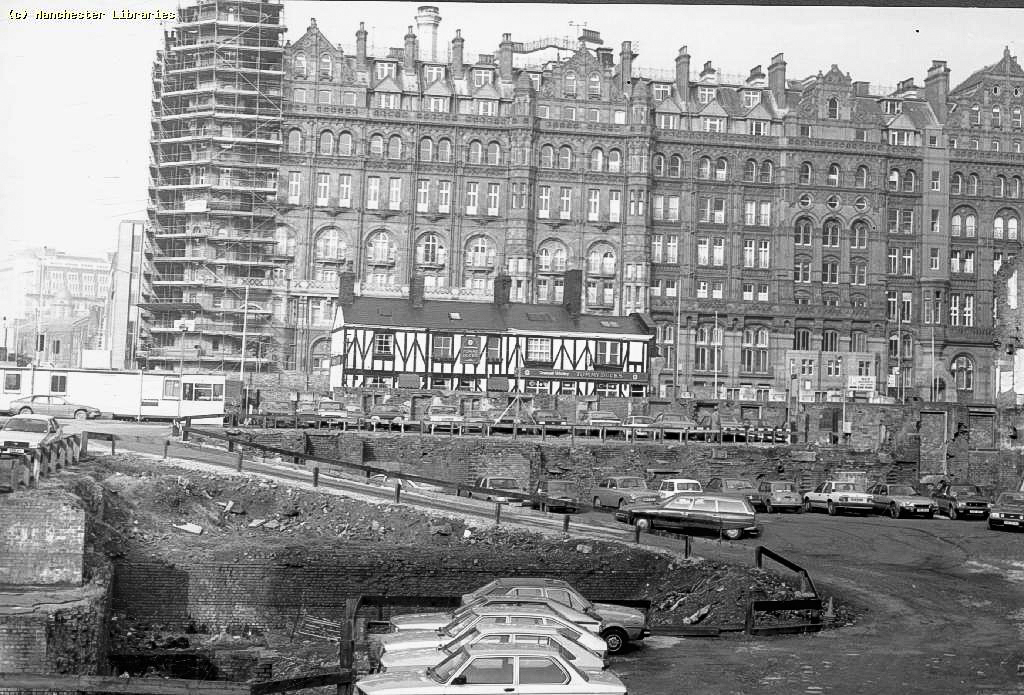 Located on what is now Lower Mosely Street, directly opposite the imposing Midland Hotel, what we are certain of is that the pub was in existence by the 1860’s, and was known at the time as The Prince’s Tavern – perhaps a reference to the nearby Prince’s Theatre over on Oxford Street (and now the site of Peter House, that massive office block that’s also home to Don Giovanni’s).

One of the most enduring stories of the pub is how it got its name, and it was seemingly all the fault of a rather dim-witted sign painter – whose name has been lost to the pages of history. 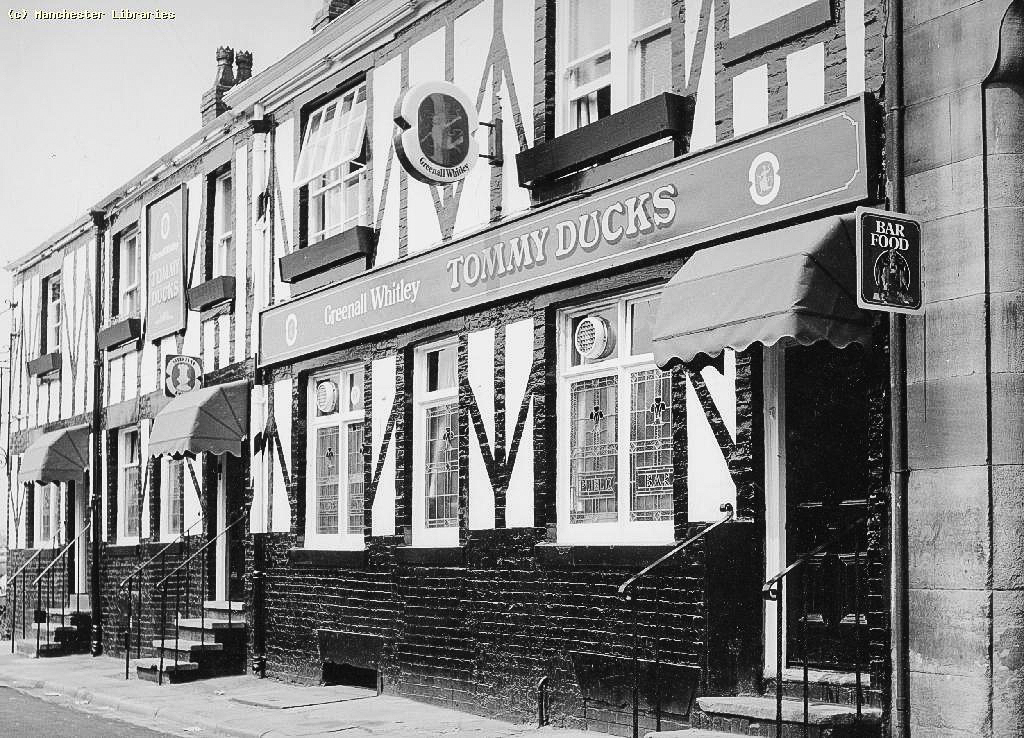 The story goes that around the 1870s, the landlord of the pub decided he wanted to change the name – and in a rather egotistical way – wanted to name it after himself. His name was Thomas Duckworth, so he hired some fella, probably just some little lad he collared as he walked past, and paid him to get rid of ‘The Prince’s Tavern’ and replace it with his name – all big like.

Well, the sign painter fucked it up. As he started, all big and confident, he quickly discovered about halfway through that he didn’t have enough room to finish it off. So, he improvised and painted “Tommy Ducks” instead. Whether this story is true or not is, of course, up for debate, but it’s a great start for a pub whose very existence seems to be a series of mishaps and myths. 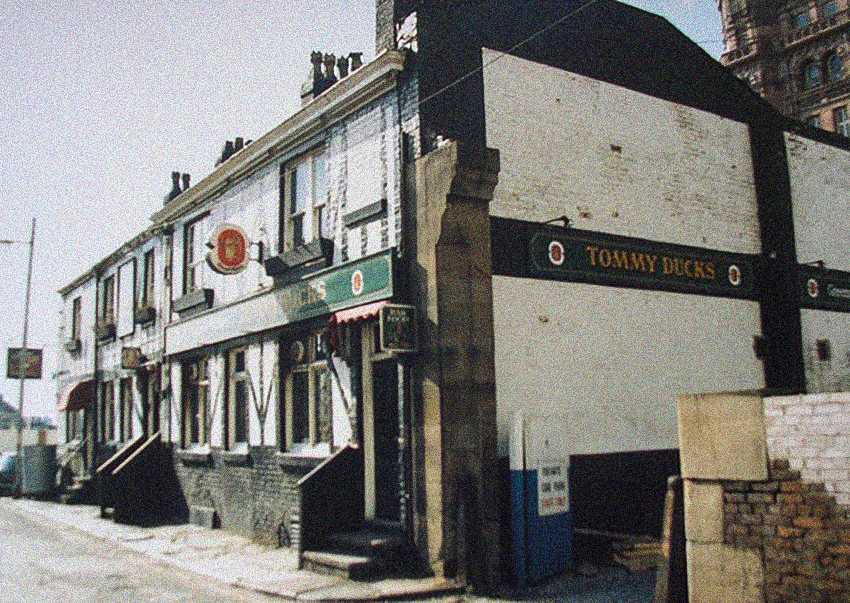 Tommy Ducks continued to serve up beers and ales right through into the 20th Century, where in 1906 it was acquired by local brewers Greenall Whitley, where it remained in their possession until it’s demolition in the 90s. More on them later.

For around the next 60 years or so I’ve struggled to find much in the way of what was happening at Tommy Ducks. I’m just going to presume that it was just like any other boozer in the city centre, packed with workers on a lunch time, full on an evening after work, smelling of stale ale and ciggies and with a landlord who wore slippers, had a dog and didn’t take no shit off youngsters. 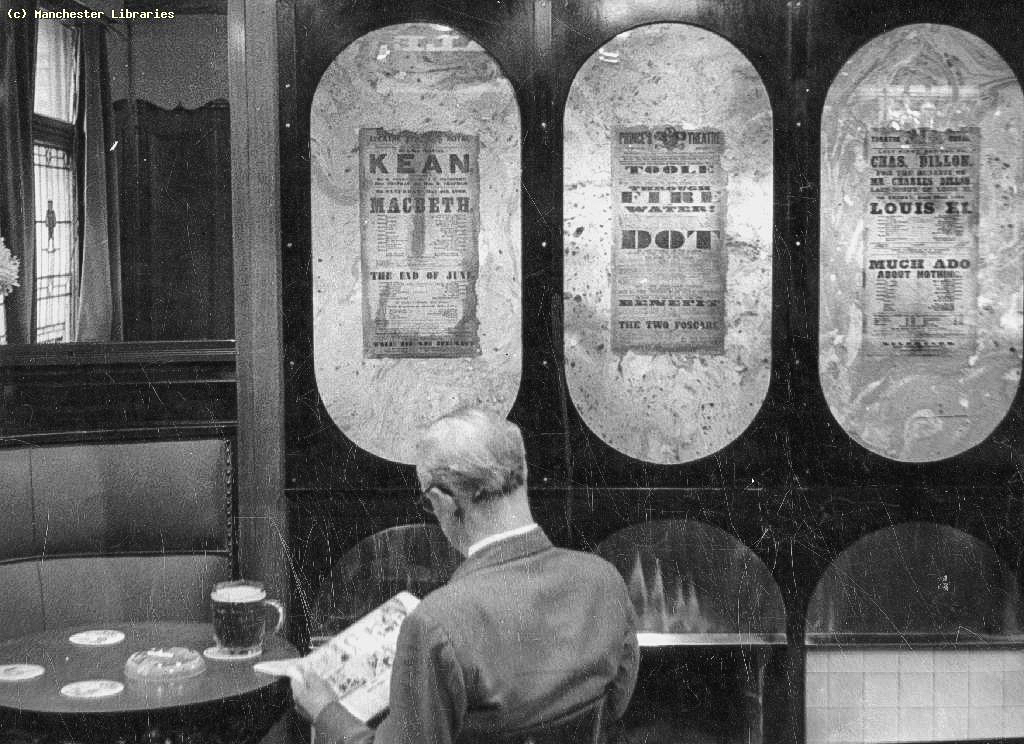 This was probably taken at 9am on a Tuesday morning

The stories, the myths and the potential bullshit seem to start emanating from the early 70s, a time when the pub was standing on its own on Lower Moseley Street as the buildings around it were all demolished.

A shining beacon set amongst some depressing derelict land and dwarfed by the Midland Hotel, Tommy Ducks became a must-visit venue for visitors to the city, and was always packed with thirsty regulars. 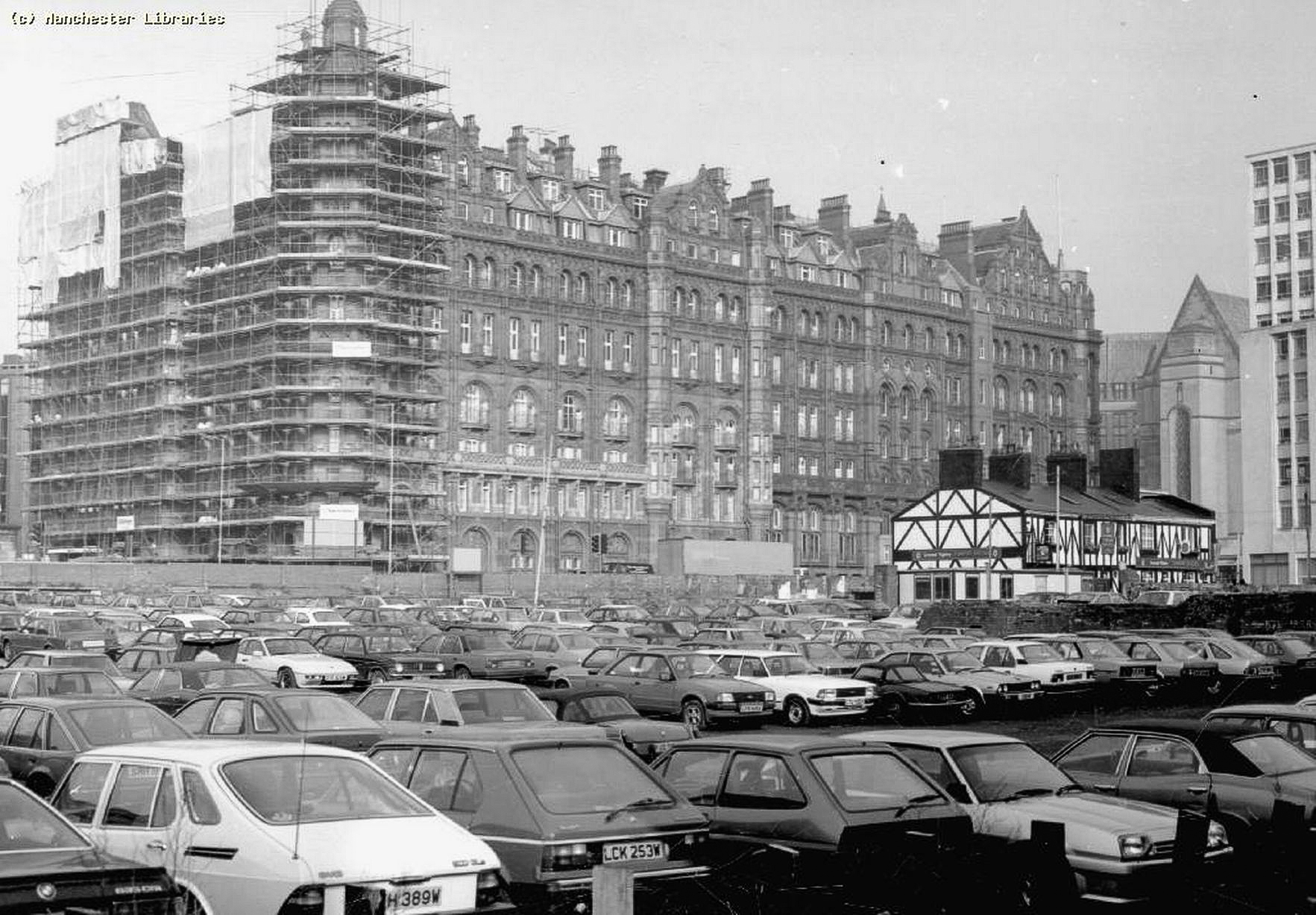 Now, some of these stories are true, as there is clear pictorial evidence to prove it. Others – not so much. In fact, I found one story online where a bloke says that he decided to pop into the pub on a Sunday for a slap-up Roast Dinner, only to discover that he got the shock of his life – Sundays were the day that the barmaids went TOPLESS! Yeah right, whatever.

Seemingly never ones to let 70s misogyny stand in the way of having a decent booze up, at some point around this time the pub became known for its impressive array of ladies’ knickers which dangled from the ceiling and above the bar. 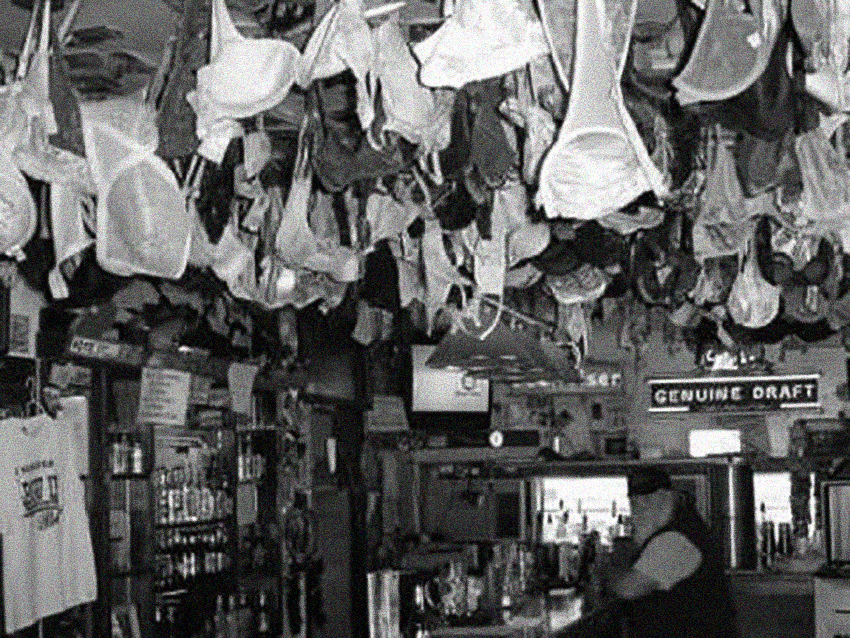 A reconstruction of what the inside of Tommy Ducks looked like

Upon their first visit to the pub, women would be invited to remove their dirty keks which were then stapled somewhere and most likely left for any old Tom, Dick or Harry to sniff or steal.

The story goes that this tradition enraged a group of local feminists who decided to try to ‘raid’ the pub to take down the knickers, but the regulars and landlord managed to stave off the ‘attack’ and the knickers stayed up. 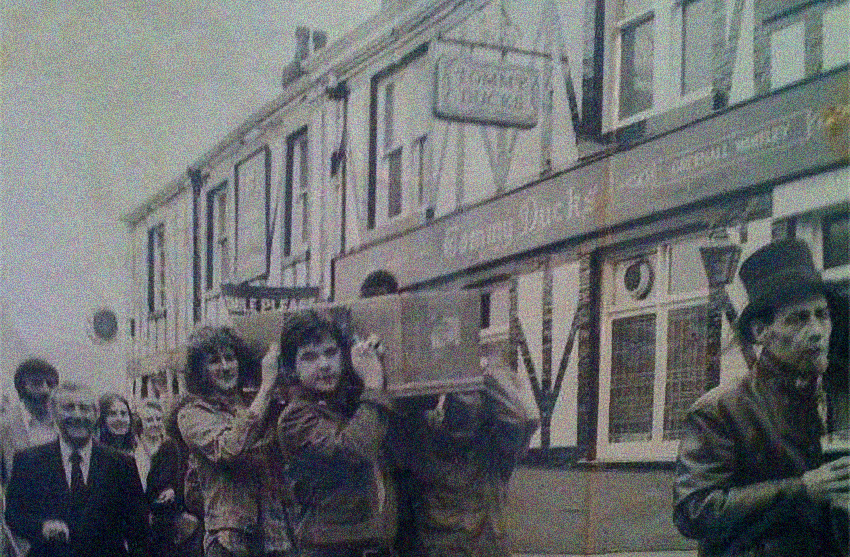 Either a funeral going past the pub, or someone taking a table outside!

Another thing that people talk about when they’re reminiscing about Tommy Ducks is the fact that they used a couple of actual coffins for tables, simply topped with some glass, a few beer mats and you’re all set. Well, one of the coffins actually featured a skeleton, which many people are adamant was a real one – the bones of some unfortunate sod who perhaps got too hammered on whisky one night.

Or maybe it was that little sign painter whose punishment for not doing his job properly was to lay in eternal slumber under the watchful gazes of a bunch of pissed up punters? 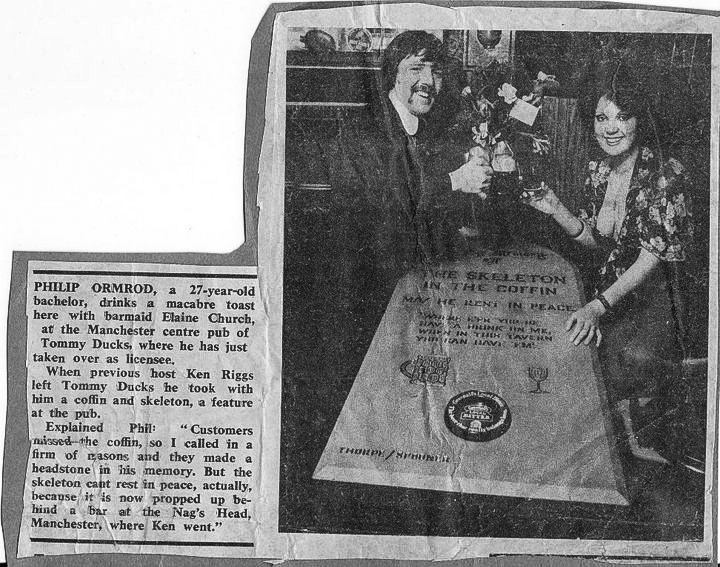 Anyway, one night a rival pub in the area decided to play a prank on Tommy Ducks and actually stole one of the coffin tables, so the pub replaced it with a polystyrene replica until they managed to wrangle it back from the thieves.

As well as knickers on the ceiling, skeletons in coffins, bank notes from around the world under the bar, great graffiti in the toilets, Singer sewing machine tables, ‘topless’ barmaids and live jazz on Sundays, the 70s saw Tommy Ducks move into the world of merchandise, using a popular cartoon that was doing the rounds in the city at the time.

Way before memes, some dirty bugger had drawn a cartoon of a couple of birds shagging in mid-flight and everyone loved it. 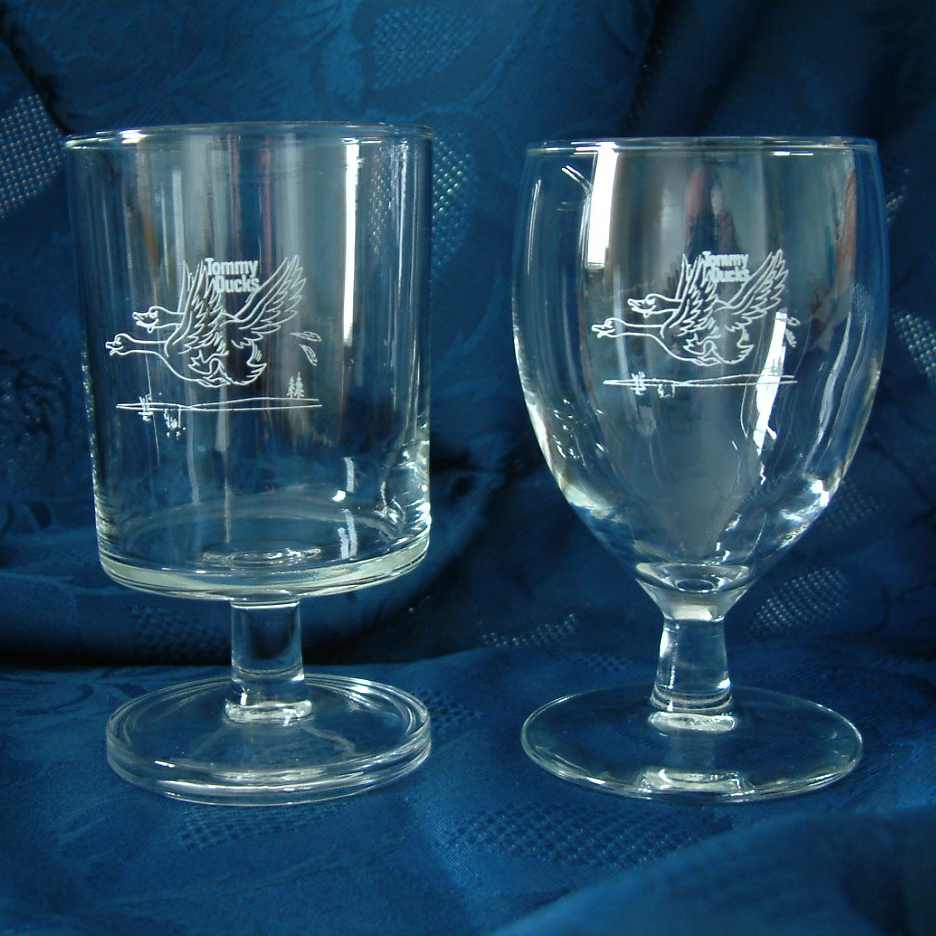 Once the cartoon reached the hands of the landlord at Tommy Ducks, a little lightbulb must have gone off in his head, for in almost no time at all, the ‘logo’ was on mirrors in the venue, on all of the glassware and you could even buy t-shirts with it on, prompting you to “Soak Up The Atmosphere of Tommy Ducks.”

For a boozer with such legendary stories and status, it wouldn’t do the place much justice if it was to just simply close down – and so the end of Tommy Ducks is almost as unbelievable as the rest of it all. 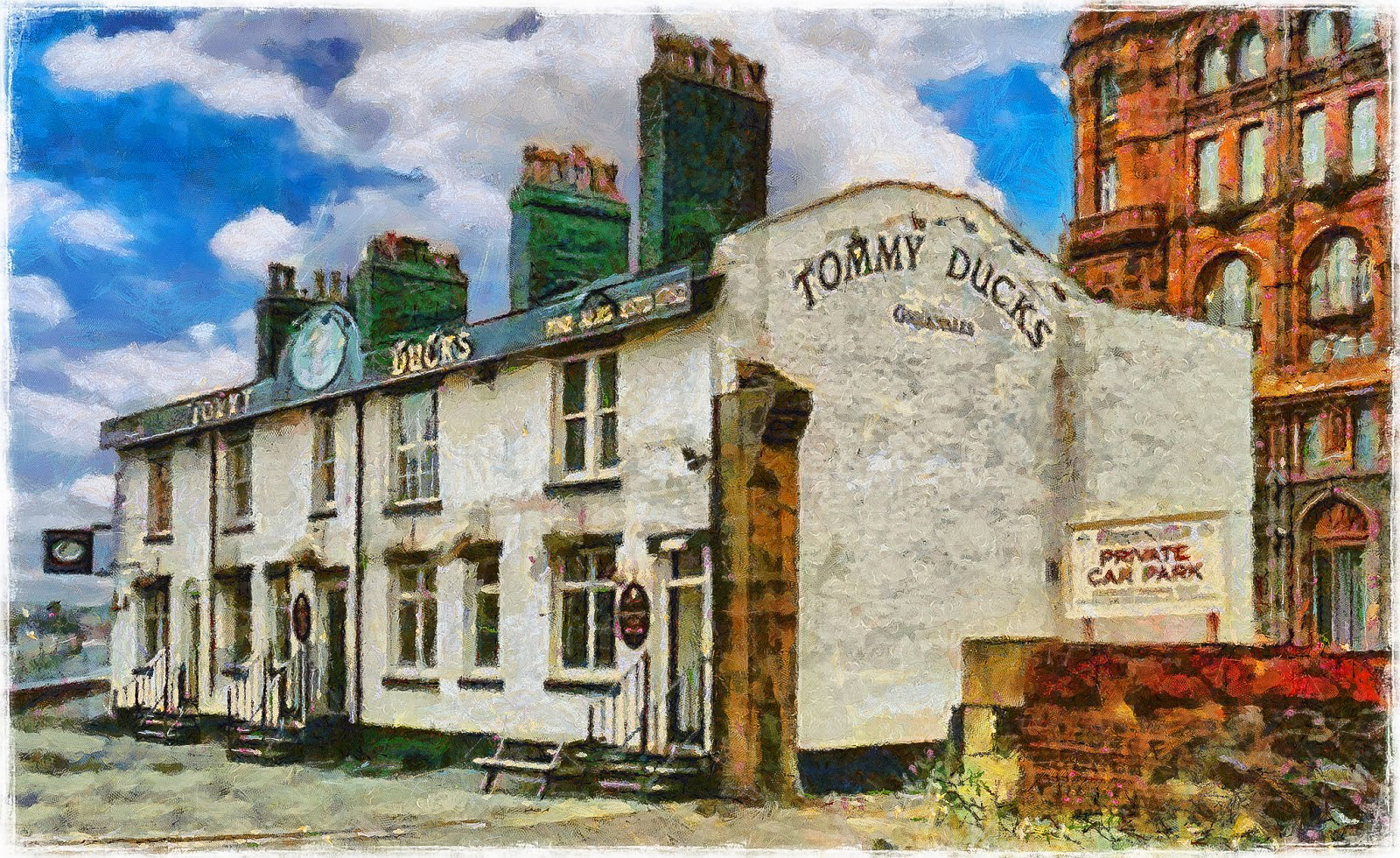 A painting by Peter Topping

By the early 90s, Tommy Ducks had been a last standing building in an area that had seen pretty much everything else demolished within the last 30 years, and with new office blocks moving in, pressure was on at Greenalls Brewery to sell up and all go to Disneyland on the massive amounts of money they were being offered.

However, back in 1977, as a result of all of the remaining building in the area being demolished, Tommy Ducks was served with a temporary preservation order, kickstarting an already fierce debate about the future of the pub. The preservation order, arranged by punters and supporters of the pub was due to expire at midnight on February 12th 1993. 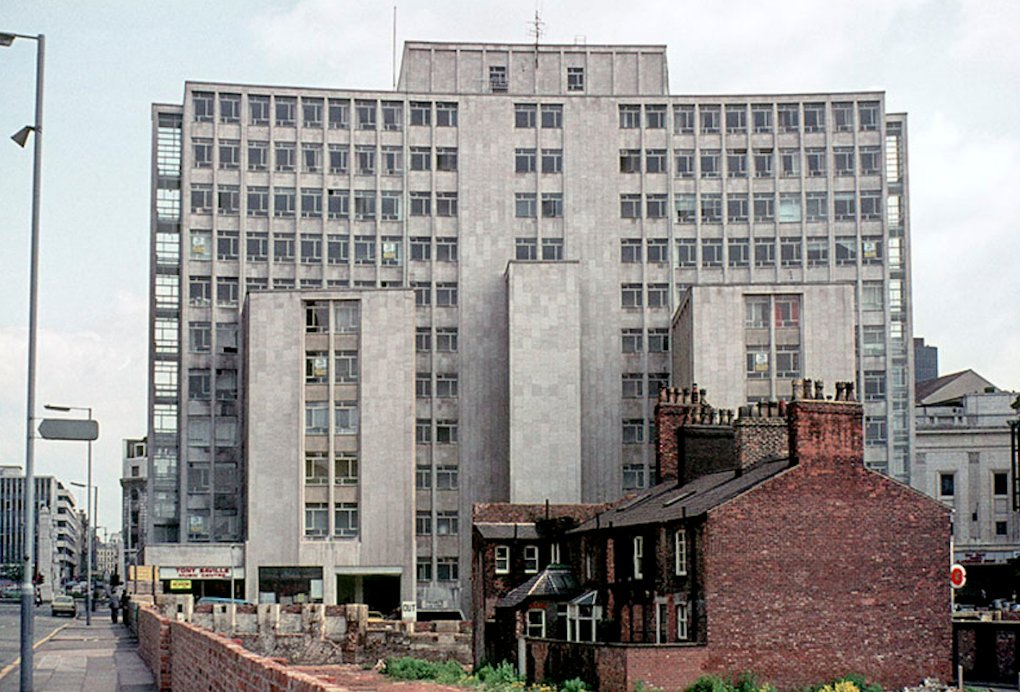 Tommy Ducks in the 80s

Unfortunately for us all (and the city), the 12th February in 1993 fell on a Friday – meaning that the Council Offices were closed for the weekend, meaning it couldn’t be renewed until Monday morning. This meant that, under cover of darkness, the Brewery began demolition the pub at 00:01 on Saturday morning, waving goodbye to a legendary Manchester institution literally over night!

Greenalls were fined £150,000 for their act of destruction but it didn’t matter – Tommy Ducks was gone forever.

A year later CAMRA decided to hold a wake for the much-loved pub, but none of it mattered. The land was sold and, in its place today is a boring chain hotel, complete with chain bar and restaurant below.