Despite its picture-perfect appeal, Angel Meadow has a pretty creepy history... 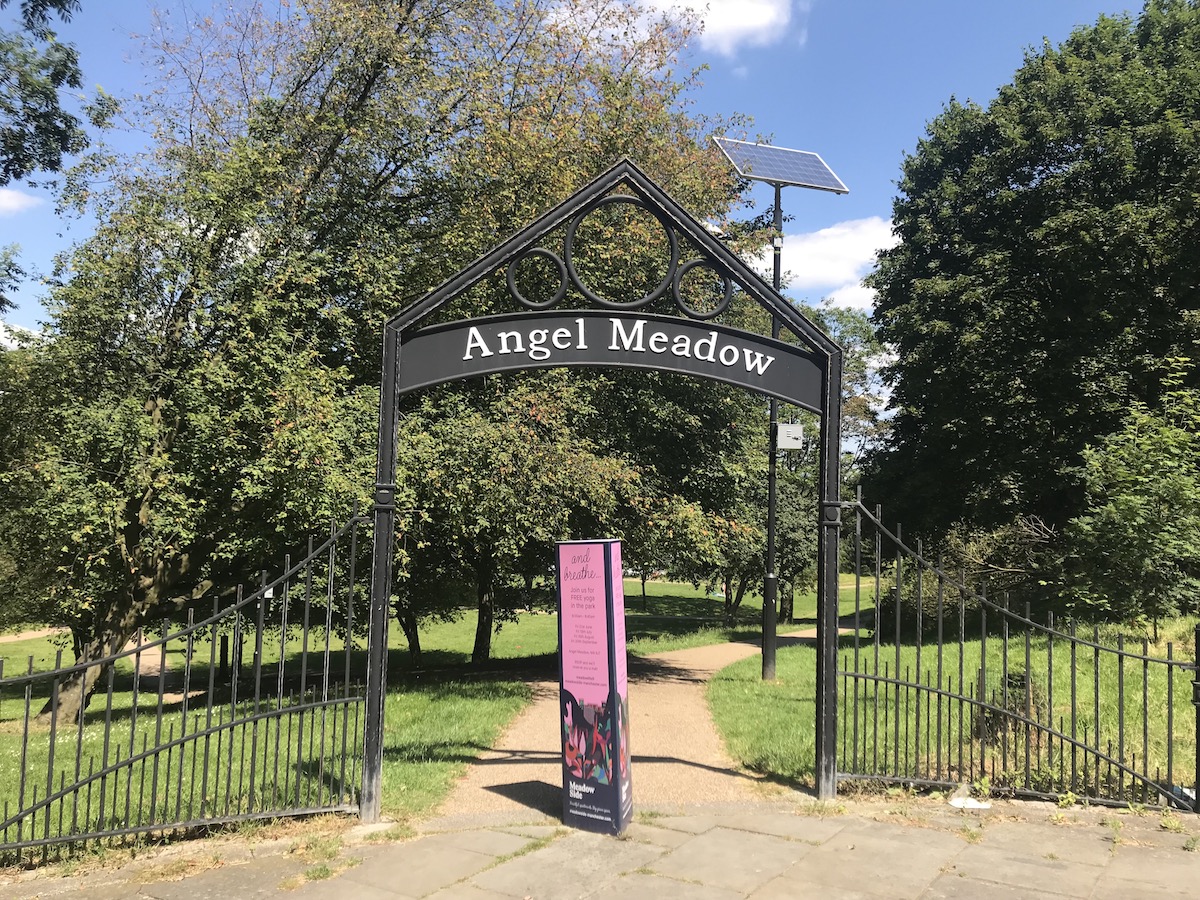 The garden was once described as ‘hell on earth’ in one of the most socially influential texts ever written; ‘The Condition of the Working Class in England’ by Friedrich Engels. The garden even has its own book ‘Angel Meadow: Victorian Britain’s Most Savage Slum’ by Dean Kirby. 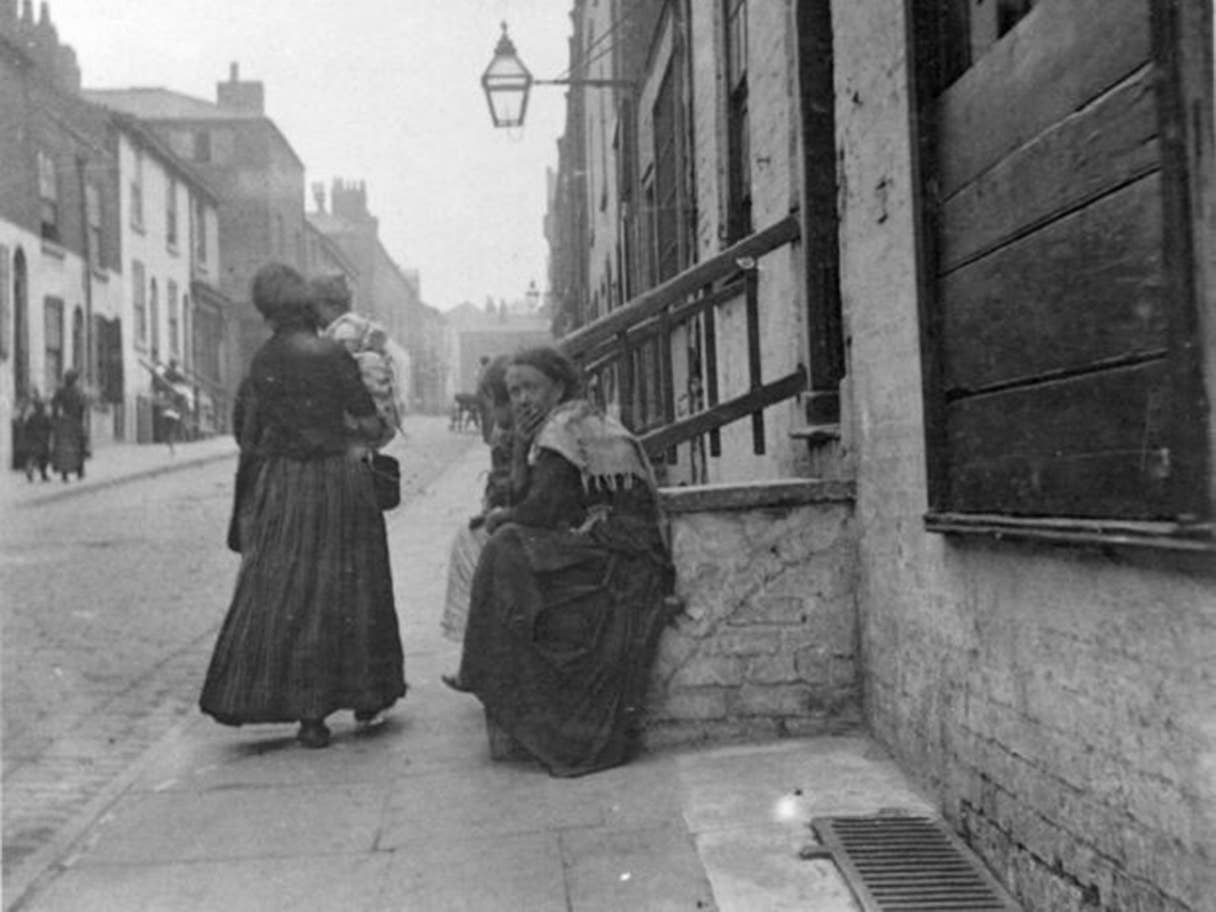 As you walk through the gardens, a pretty thin layer of concrete separates your feet from the remains of Victorian houses demolished in slum clearances following the disastrous after-effects of the Industrial Revolution.

A powerhouse of the time, Manchester is famously known for the boom during this period, ‘Cottonopolis’ was created, the middle class was formed and migration to the city was high. The city grew and the economy boomed. However, during this period, 30,000 factory workers called just 33 acres of land home.

I dunno about you but I’ve never understood acres, so I did a bit of maths to put that into perspective. It works out to around 4 and a half square meters for every person (I think). So you can just about spin around with your arms out basically. Plus there was a whole load of animals knocking about. 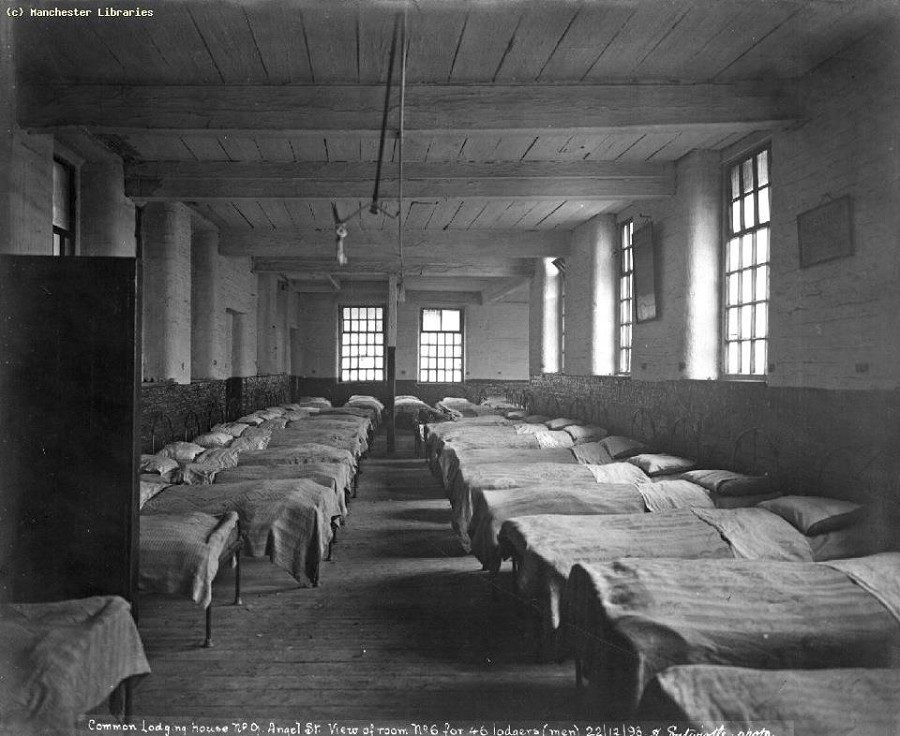 The area became slums, the narrow streets were filthy and deadlier than almost anything else found in the country. According to the 1881 consensus, there were just over 1000 inhabited dwellings in the region, the death rate has been quoted in numbers from 32 to 50 per 1000 per year. The average during that time for the whole of England was less than 19.

This means more people died here than the number of people who died in Whitechapel during the year of Jack the Ripper. So yeah, a hell of a lot of people died from horrible diseases and such. 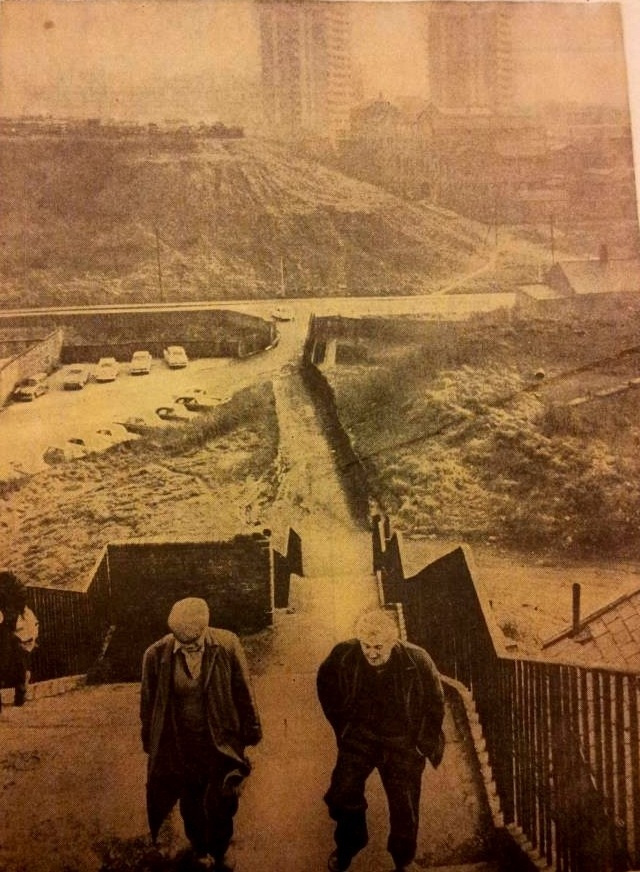 The darkness of the city at the time was described by French philosopher, Alexis de Tocqueville as “A sort of black smoke covers the city. Under this half-daylight, 300,000 human beings are ceaselessly at work. A thousand noises disturb this damp, dark labyrinth, but they are not the ordinary sounds one hears in great cities.”

Conditions were violent and disease-ridden. The homes have been described as cattle sheds for human beings, robbing any inhabitant of all human dignity. 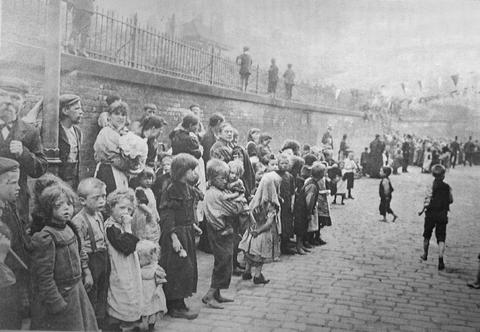 St Michael and All Angels’ church was built in 1788 and just 20 years later, a letter appeared in the Manchester Guardian expressing disgust… “why one of the ugliest churches in Manchester situated in one of the most crowded and notorious parts of the City, should have so long enjoyed the pleasant sounding name ‘St Michael’s, Angel Meadow’ is beyond understanding“.

By the sounds of it, it does make sense. It doesn’t sound nice at all at the time. But the name Angel Meadow carries a different meaning now…

The cemetery in the land adjacent to the church very quickly became one of the largest in the city. Angel Meadow was crammed full of 40,000 bodies of those who had no family, or those who couldn’t afford a proper funeral.

In the guidebook to Manchester released in 1816, the area was called a ‘depot for the dead’. It is now, an Angel Meadow. 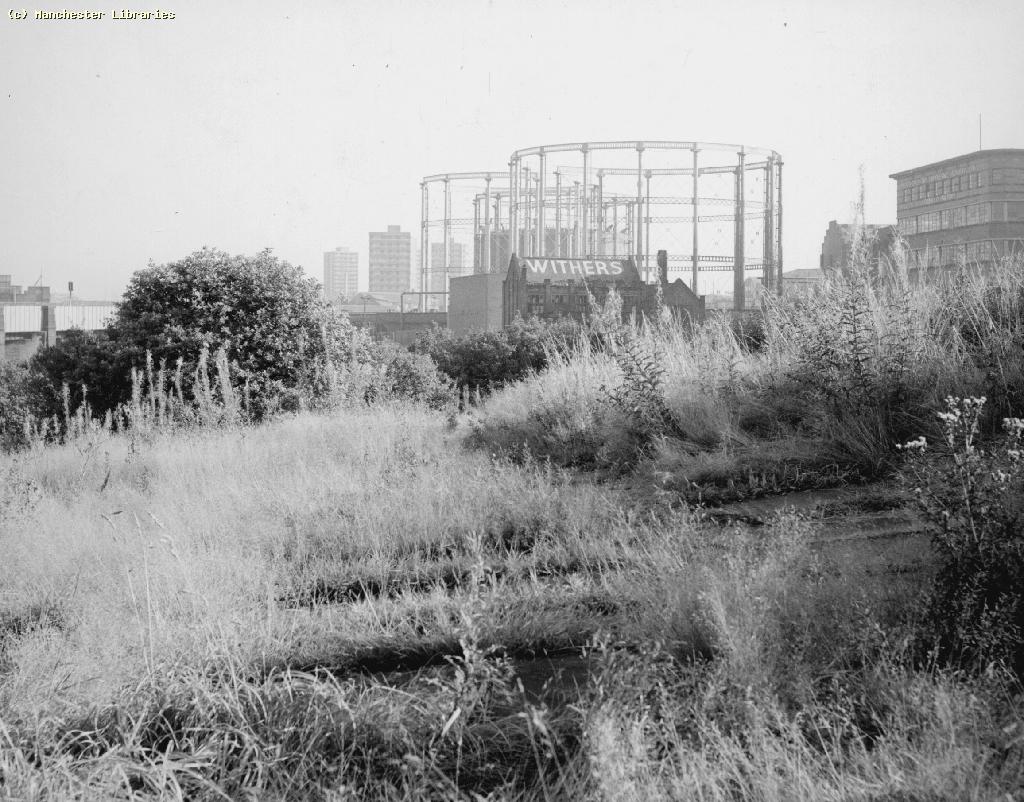 No new burials were added in the following years, the walls collapsed and loads of headstones were stolen to fill the holes in houses. The cemetery became a dumping ground, it later closed in 1854 and the area including what was the church (that is now demolished) became a playground of all things.

According to some research (and maybe take this with a pinch of salt), the area became home to weekly fights. One particular fight became pretty famous; a battle between two one-armed tramps ended with one, resultingly nicknamed ‘Stumpy’, biting the other’s only hand off. Breaking the fighting code (obviously), Stumpy basically got the shit knocked out of him and was banished out of the area leaving his mangled face to tell his story. Like I said, pinch of salt with this tale. 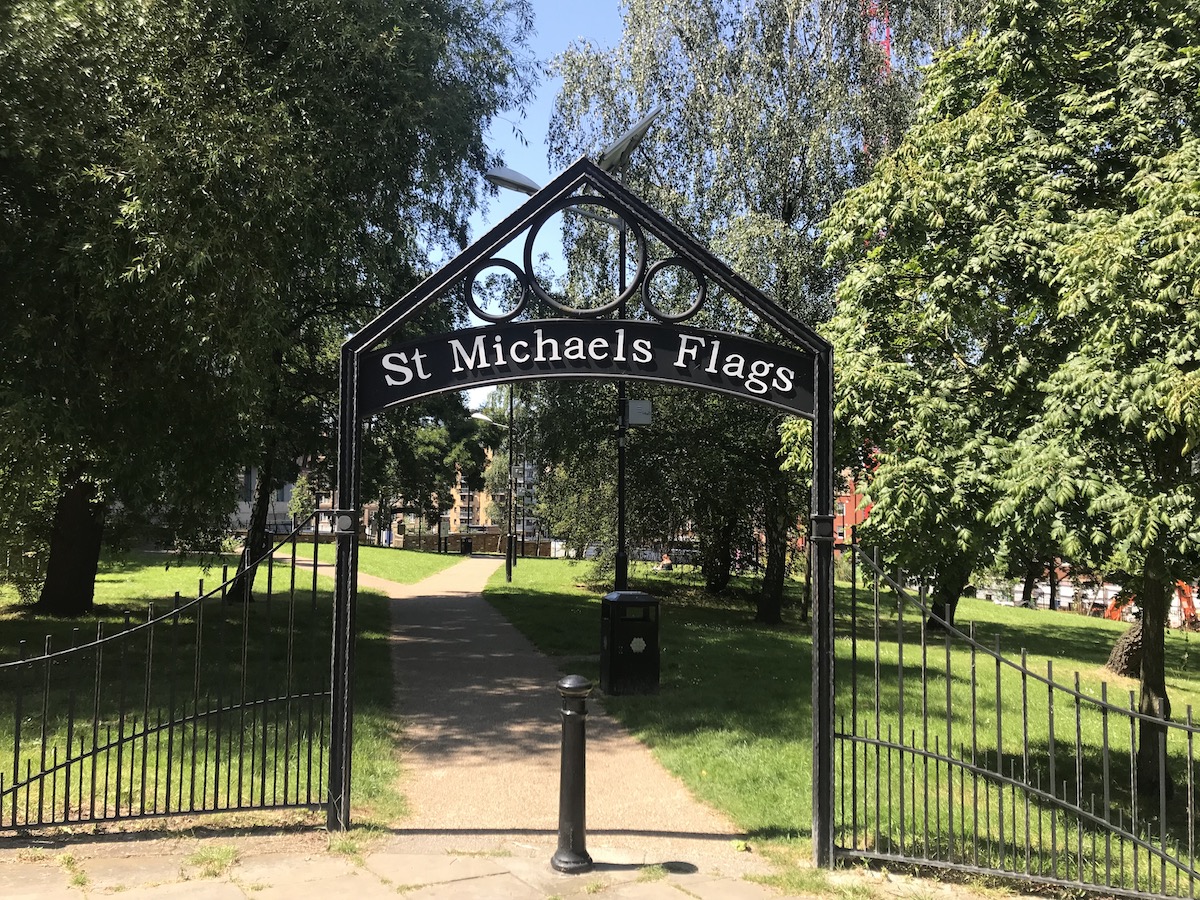 The massive graveyard remained without flagstones for 40 years, until it was finally covered and thereafter known as ‘The Flags’.

Fast forward to 1998, the Tobacco Factory Warehouse transformations started and the ball began rolling for the regeneration of the area.

Skip forward again, and the past has somewhat been forgotten, the area is now a pretty sought after place to live with luxury flats popping up all around. The garden its self actually looks pretty nice when the sun is shining, but I have to say I’ve actively avoided going here at night basically forever and now I know the history, I’m glad.

This guy in particular, does not seem arsed about what is lurking below… 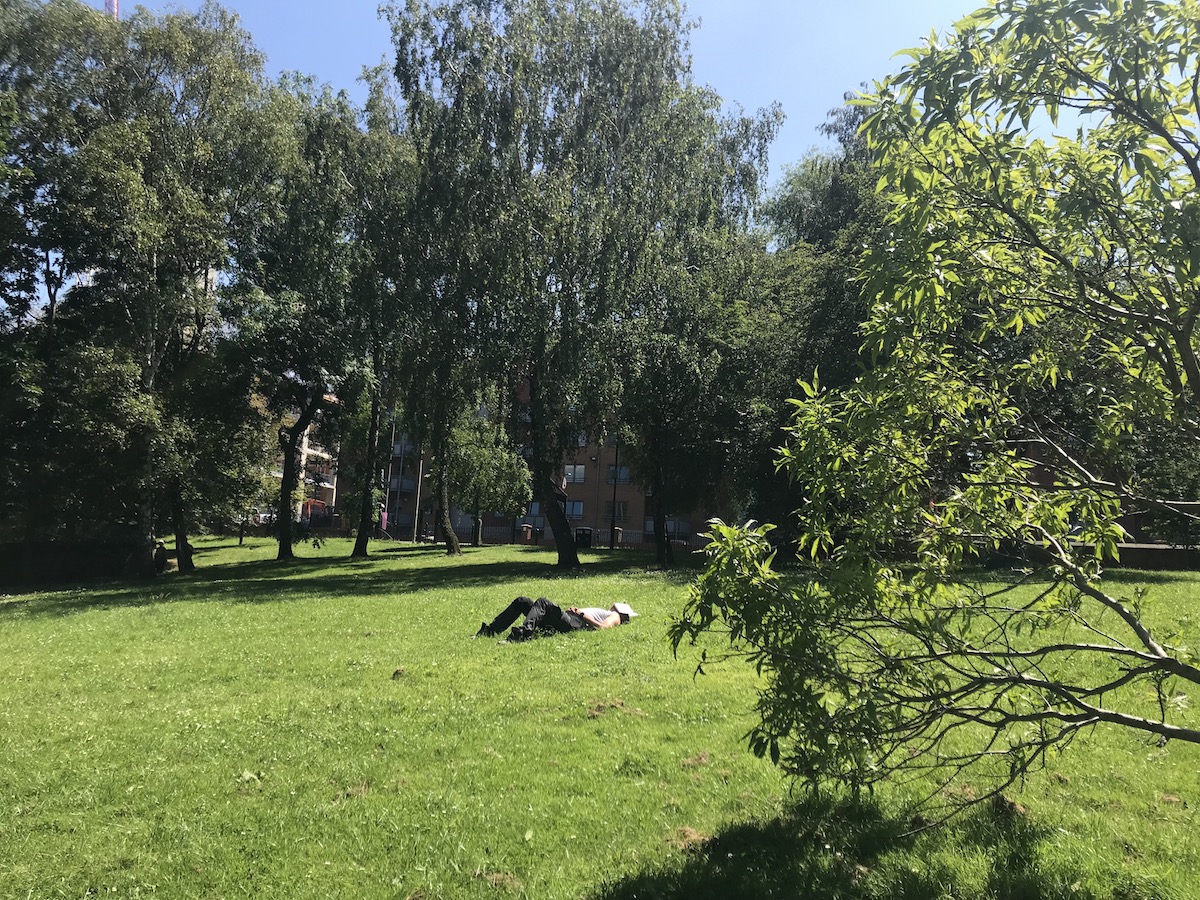 The area’s continuing regeneration is set to be home to 15,000 new affordable homes and the NOMA area is undergoing an £800m redevelopment. There are now even free yoga classes held in the park throughout summer.

I do wonder if you get chills as you stretch into your downward dog, or have that weird sense of ‘I’m not alone right now’ as you get lost in your book in the sunshine. Or maybe, that guy that’s asleep had some weird dreams? Who knows. But I’d put a tenner (maybe a fiver) on Angel Meadow’s being a pretty haunted spot.

I mean, people have seen the ghost of a single dead person in houses all over so surely there’s at least one ghost in a park that has 40,000 graves underneath? Just a thought.