One of my favourite memories from University is going to a Roller Disco at Lucid in The Printworks with my mate Eggy and watching him completely wipe out some poor girl as he lost control of his skates after one too many Stella & Reefs.

Well, that poor girl, whoever you were – perhaps you still experience crippling back pain from Eggy’s terrible skating – it might be a good idea to give La Rolla Disco at Albert Hall a wide berth, while the rest of us can enjoy a night of soul and hip-hop while channelling our inner 70’s Rollergirl skills.

In association with La Discotheque, topping the Rolla Disco line-up is DJ Format, one of the UK’s greatest turntablists and finest beat makers, who will be bringing a night of his signature soulful, funk-fuelled hip hop set – perfect for a doing some spins and flips and whatever else you’ve got in your roller skating arsenal.

Joining DJ Format on the night will be WHP favourite Krysko who has established himself as one of the most respected DJs in the North in recent years, holding down an 11-year residency at The Warehouse Project, and performing at esteemed festivals such as Sónar Festival in Barcelona and Secret Solstice in Iceland.

Will Tramp! is a name known to many within the Manchester clubbing scene. He’s held down a residency at The Warehouse Project for a number of years and been involved with some of the best parties in the city including Homoelectric. He prides himself on showcasing a number of genres, including boogie, disco, house, techno, balearic, garage, hip-hop, electro-funk and basement… Something for everyone then!

Driven by support from the likes of Gilles Peterson, Quantic, Rob Da Bank and Nightmares On Wax, Sam Redmore has built a name for himself over the last few years for crafting soul-drenched remixes and reworks of both solidified classics and lesser-known gems and being one of the biggest soul and funk DJs – according to Craig Charles! And he completes the awesome line-up for the first (of many) Rolla Disco’s at Albert Hall.

Tickets are limited so you’d best get involved as soon as you can.
This is just to Eggy now – stay at home mate. 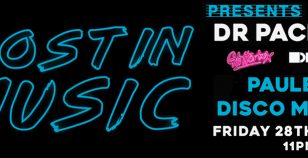