For some time now The Beagle in Chorlton has been delighting customers with a fine array of booze, comfortable yet classy decor and a friendly and relaxed atmosphere typical of the local bar scene. Add to this mix the seemingly incongruous Mexican street food of Margo and Rita and suddenly this well loved bar seems to be offering Chorltonites something out of the ordinary.

Having been a huge fan (not literally) of Mexican food since discovering cheap and delicious burritos and tacos one long hot summer in California several years ago (OK, I’ve never been to Mexico), I showed up at tonight’s taster event with high hopes. Can the street food chefs who have now taken up residency in the Beagle’s kitchen do justice to the fondness us Chorlton folk have for this tremendous drinking establishment?

The food itself is further evidence that a lot of love, and some top quality ingredients, go into Mark and Diane’s food.

First impressions count for a lot and it was a great start to the night to be met by Diane, one half of the dynamic street food duo. Straight away we were chatting like old buds and what came across was that while this venture is certainly a labour of love it’s also a massive roll of the dice. Having both given up their day jobs to follow their street food dream, Diane and Mark obviously care what their customers think. Their formidable twitter presence and the feedback forms we’re given on the way in are testament to that.

The food itself is further evidence that a lot of love, and some top quality ingredients, go into Mark and Diane’s food. My friend had the pulled pork burrito (£12.50 including guacamole and fries) and the pork was as tender and juicy as can be. The beef and beans in my chimichangas (12.25 including fries and guacamole) were equally delicious, and the the overall flavour of both dishes was top notch. Condiments were many and varied and all added an extra layer of excitement to the food (watch out for the habanero sauce!) The fries and onion rings weren’t huge in their portion size, but both were expertly cooked and seasoned. Perhaps the most pleasing element though was the complimentary margueritas, superbly mixed and served just right, a real taste of sunshine in dreary south Manchester.

So as you’ll have seen from the prices, cheap and cheerful street food this ain’t (starters are particularly pricey at £4.75 for nachos with a fairly modest amount of topping). But if you’re after soulful, satisfying, delicately flavoured, authentic Mexican food served with love and prepared with no little skill, you most certainly won’t be disappointed. It just might make you wish you really were south of the border… 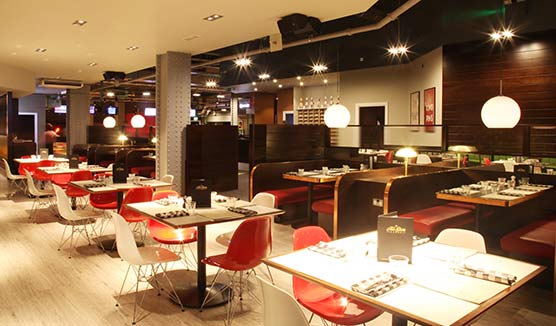