Looks like the theme of this week is MEAT - bring on the gout baby! 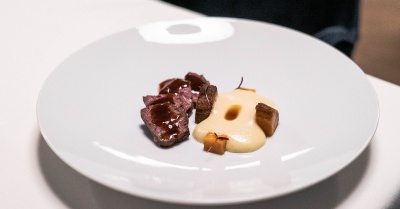 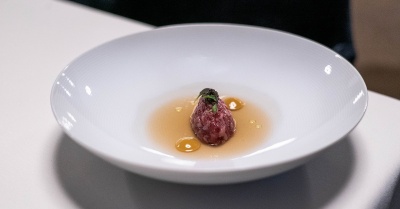 Wagyu En Dos Serveis
Tast
On the whole, the 10- course Enxaneta tasting menu at Tast can be described as nothing other than sublime. I even got to meet the man himself- Paco Perez- the Michelin star chef who is behind the helm at Tast on his once a month trip over from Spain. It was hard to choose a favourite (honourable mentions go out to the deconstructed Cesar salad, chicken & lobster rice and chocolate petit fours) but the showstopper was really the Wagyu beef served in ‘two steps’. First was a dangerously tender wagyu beef tartare followed by fillet served with demi-glace, polenta foam and sweet potatoes. To call it tender or melt in the mouth would be an understatement of epic proportions and I have since concluded that both parts are better than ice-cold Champagne, sex and even life itself. – Kate Tighe

Keema Per Eedu
Dishoom
Yes, I understand that everybody raves about the Bacon Naan at Dishoom and to make things even more complicated they’ve introduced a DOUBLE Bacon Naan this week – more than enough of a reason to ensure that any visit will result in an orgy of carbs and bacon. Well I decided to go against the grain when I visited on Tuesday, opting instead for the rather brilliant Keema Per Eedu, a protein super-bowl of spicy chicken keema, chicken liver and two runny fried eggs on top. It was hands-down one of the best breakfasts I’ve ever had. – Ben Brown

Captain Planet
Beatnikz Bar
As is becoming a bit of a Thursday tradition I popped into Beatnikz Bar on the way home this week and tried a new collaboration beer – Captain Planet – an extra pale ale that managed to slip down my neck one too many times to be fair. It’s a collaboration with Extinction Rebellion, a group of people who want to talk about the mess that is climate change so that’s why it’s called Captain Planet and also why it’s probably really good for the environment. – Jake Hardy

Courgette and Garrotxa Frituras
Lunya
This week we tried the new summer menu at Lunya. The list was filled with Catalonian delights but the courgette and goats cheese fritters stood out well above the rest. It was lightly crisp on the outside, as a fritter should be, and delightfully gooey on the inside (a bit like me when I’m filled with wine and happiness). It comes with a minty yoghurt dip which I would have dipped myself into if they had a pot big enough. – India Morris

Roasted Tiger Prawn
BAB
I know that BAB is famous for their Babs, but there is more to BAB than just their babs. On their Mezze selection, you will find a fabulous little starter made up from big juicy tiger prawns on toast topped with spicy nduja sausage and a little aioli for good measure. The prawns are fresh and flavourful and the oil from the nduja seeps into the bread in the most delicious way and not only is this my favourite dish of the week, but it is also probably one of my favourite of the year.  – Joe Wilson

Caramel Panna Cotta
Dakota Grill
There’s a brand-new hotel in town and Monday saw a few of the Finest crew head down to get some snaps, a few video clips and of course – try out the food. We devoured an awful lot of dishes in a short space of time but it was the fantastic Caramel Panna Cotta which stood out for me – a perfectly creamy dessert that hit all the right notes. Not too sweet, it’s something I could eat over and over again if someone would let me – which they won’t. Shame. – Rikki Chan