The Old Wellington Inn is a proper old bugger... 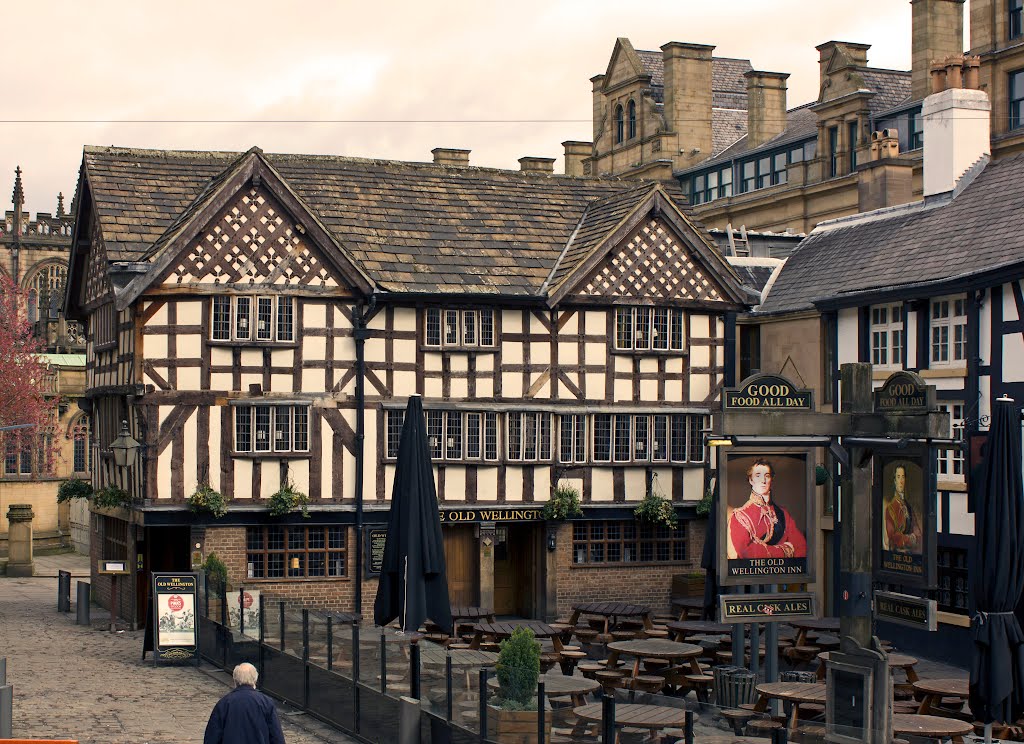 Even though I’ve been told many times that it’s the oldest pub in the city, I’m still amazed when I read when the Old Wellington Inn was built. 1552. That’s 469 years ago!

Back in 1552 the world was (obviously) a VERY different place. The Incas and the Aztecs were still knocking about, the Ottoman Empire was in its early days and a young lad of 15 – Henry VIII’s only (legitimate) son Edward VI – was sat on the throne. 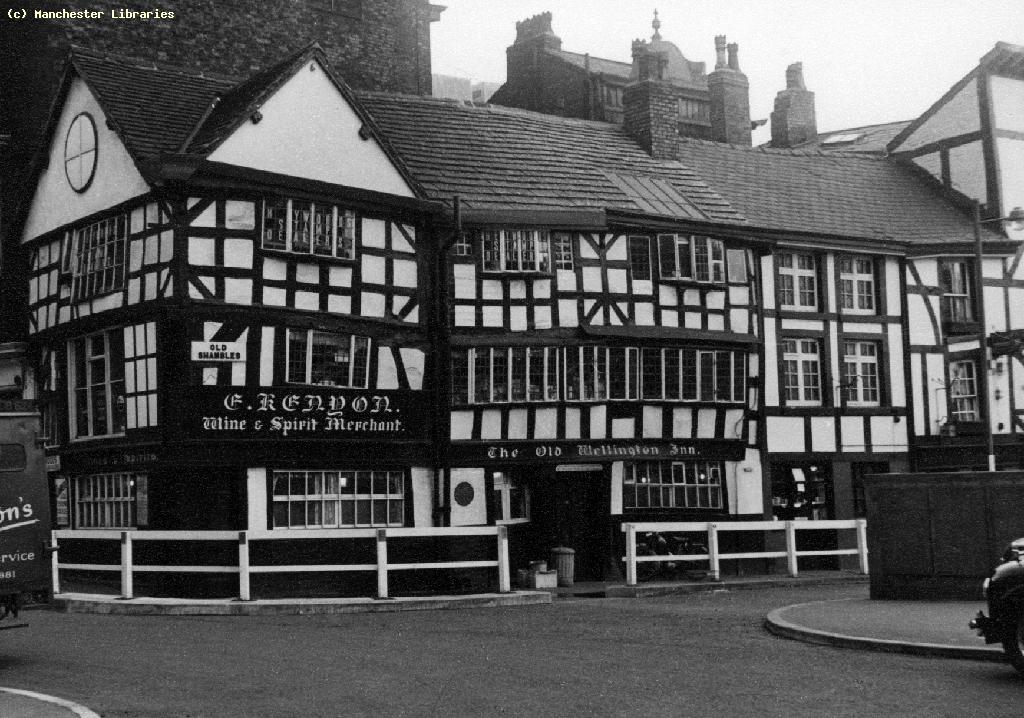 Life for the average person was extremely hard. With regular outbreaks of plague and sickness, people didn’t live very long, and if you did, you were typically a labourer, living in a tiny timber house with a load of other families, all packed together tightly like some kind of small fish in a metal container.

Roads weren’t paved, they were covered in horse and human shite and became bogs when it rained. On a Sunday, if you were lucky enough to get a day off, you’d head to church in the morning and then the tavern in the afternoon to drink ale and perhaps do some gambling – if you had the money to flitter away that is.

And it’s here, in the boozer, where we meet The Old Wellington, officially known at the ‘Oldest Pub in Manchester‘. However, it’s not actually the oldest pub in Manchester, in a sense that it wasn’t actually even a pub until 278 years after being built – finally getting a licence in 1830. 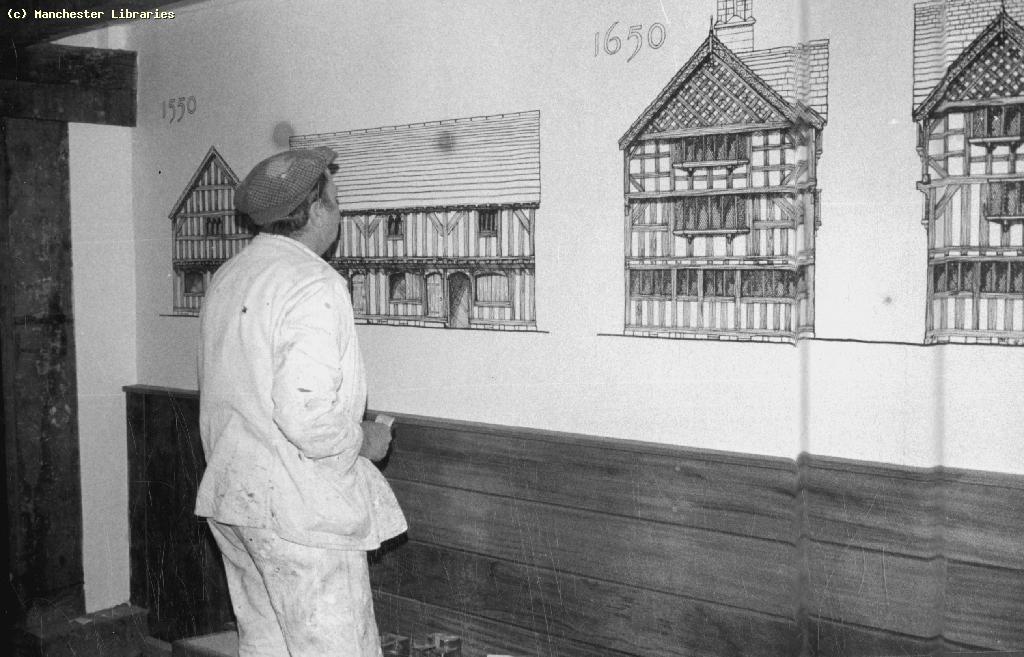 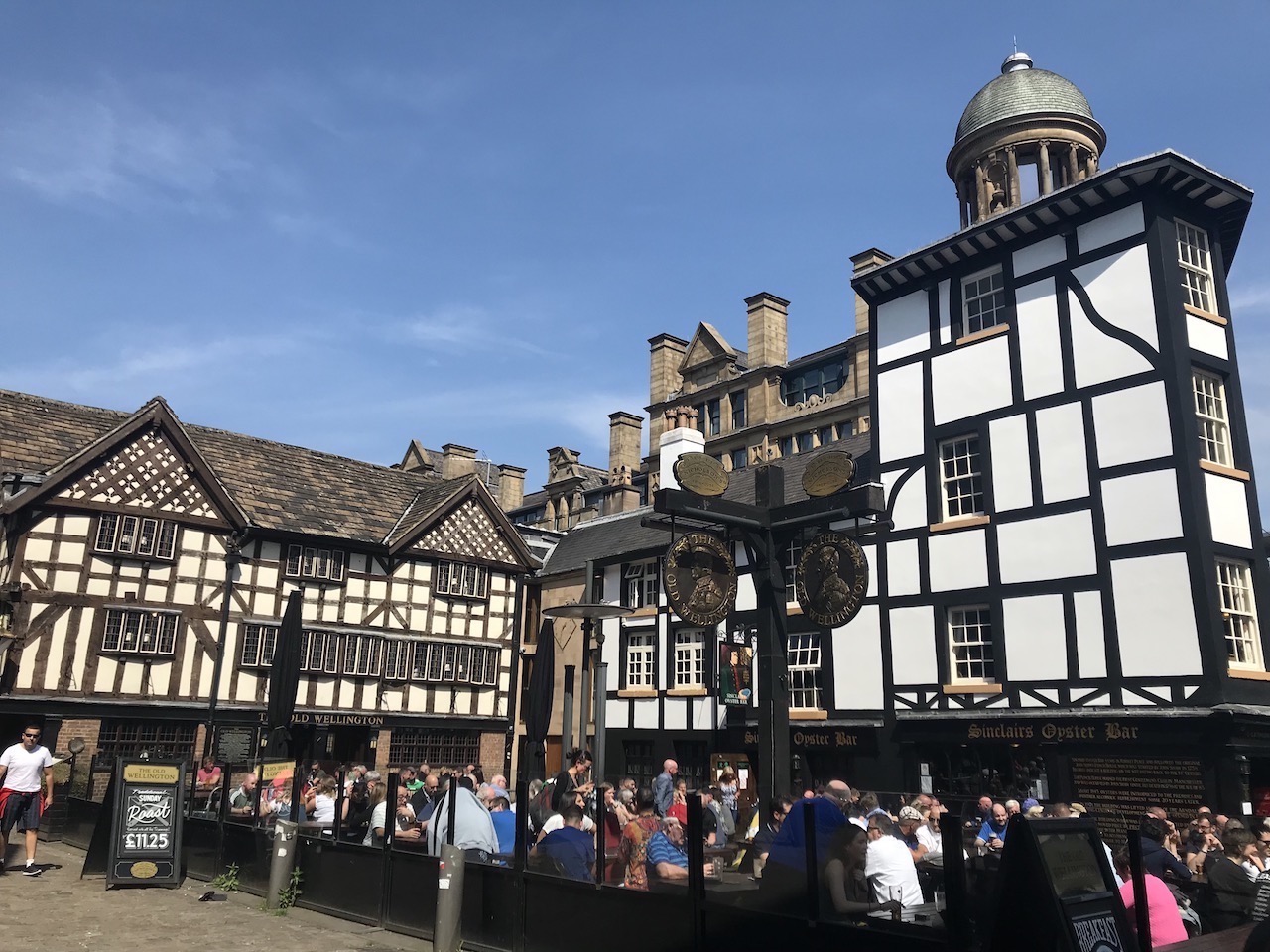 The building was actually originally a house and then part of a draper’s shop, and home of the Byrom family. It’s here where John Byrom was born in 1692 who apparently invented an early form of shorthand, but it wasn’t until the 19th Century when it actually became a boozer.

So, how is this the oldest pub in Manchester? I feel cheated. Swindled. Hoodwinked.

The oldest pub in the UK – generally considered to be the Ye Olde Trip to Jerusalem in the centre of Nottingham has actually been a pub for 832 years – which is a monumental amount of time. The Old Wellington’s claims of 191 years feel a little rubbish in comparison. 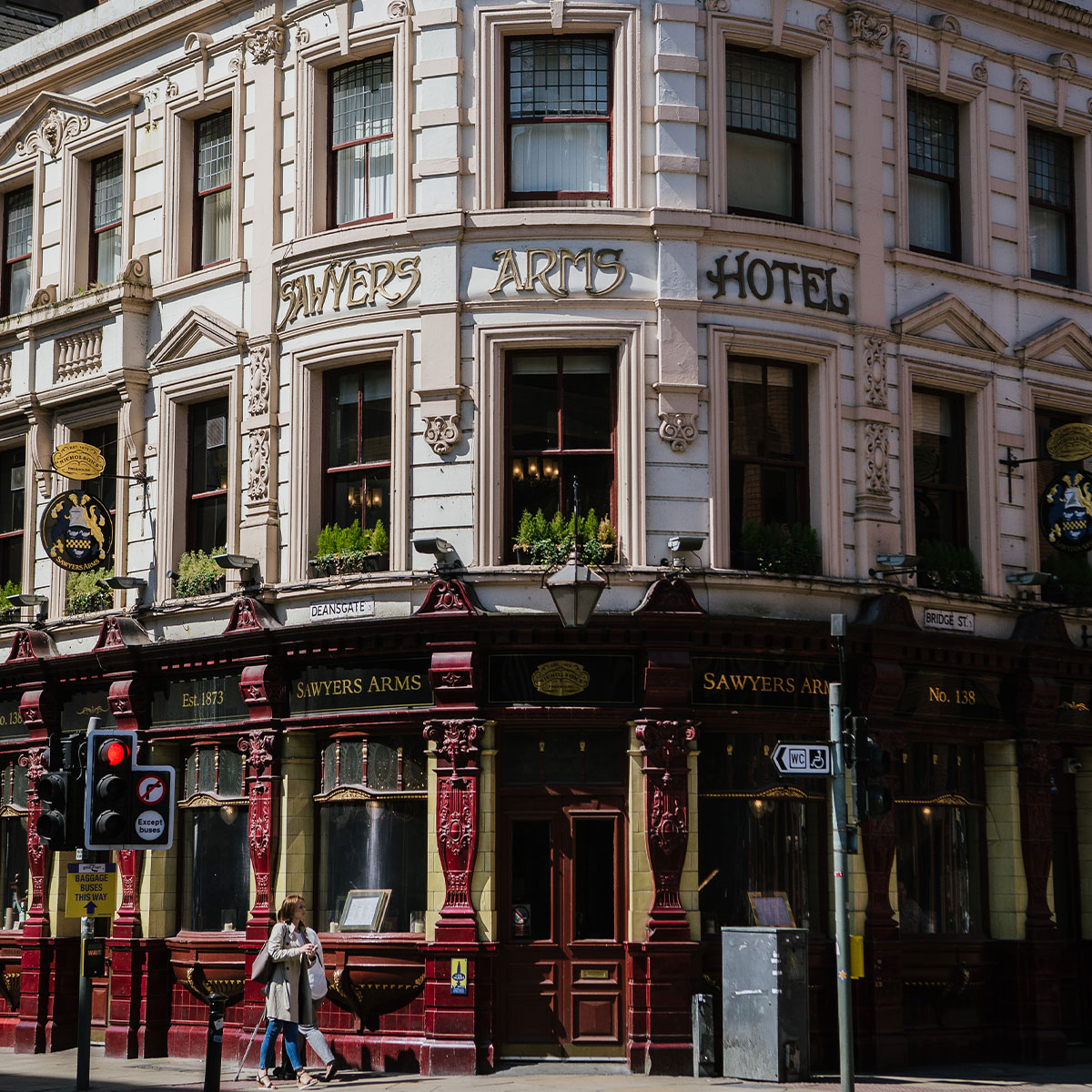 So, which boozer is ACTUALLY the oldest on in the city? Looking at the dates of when our city’s pubs actually opened, it seems like The Sawyer’s Arms is the oldest that is still standing, opening way back in 1730, followed closely by the Castle Hotel over on Oldham Street.

Well, I think the most obvious fact is that the city of Manchester itself isn’t actually that old, only really growing and becoming any reasonable size due to the arrival of the Industrial Revolution in the late 1700s. Before then it was a small township, on the cusp of a period of astonishing, unplanned growth over the course of the next 50 years. 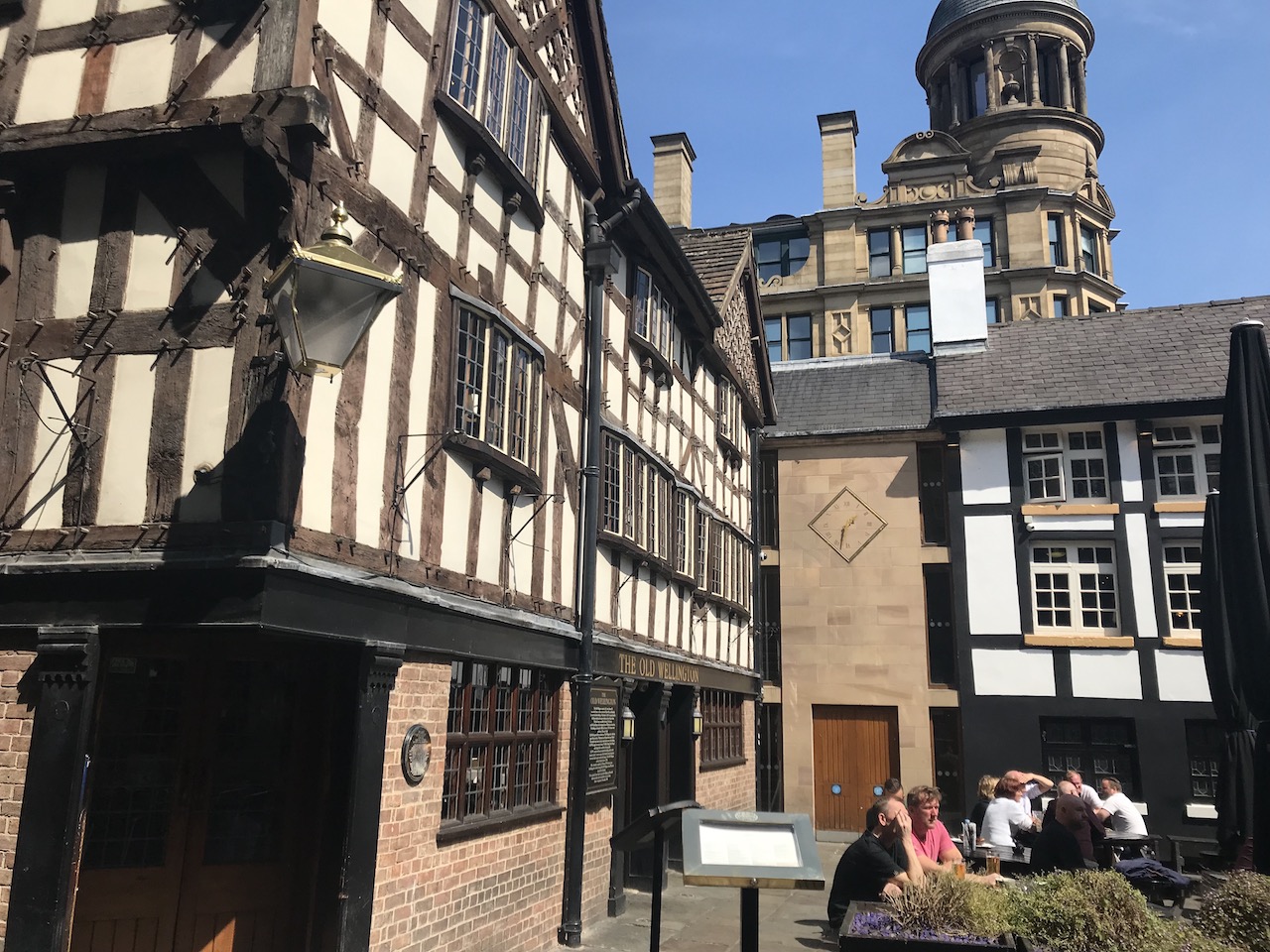 Even the Old Wellington Inn, the oldest building in Manchester, isn’t really THAT old when compared to some other cities in the UK. Things are much newer here, in an architectural sense anyway, and that’s likely the reason why we don’t have older pubs like you’d find in truly ancient cities like Nottingham, London and Edinburgh.

In fact, the ‘Old Welly’ isn’t even in its original place in the city. The building has been subjected to some considerable ‘improvements’ over the years, and was even dismantled and moved 300m closer to the Cathedral to form Shambles Square in the late 90s. 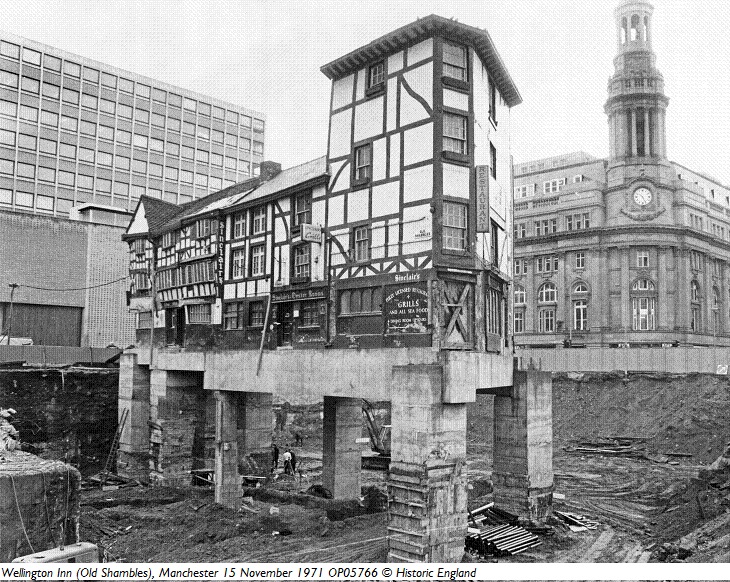 Back in the late 70s though, the Old Shambles area of the city, where the pub once stood, was underpinned by a concrete raft and raised 1.4 metres up to fit in with the re-development of ‘The Market Place Centre’ and the Arndale Centre. Opening back up in 1981, the changes made to the building were not to the liking of most.

Prior to the elevation, the centuries of settlement managed to create a wonky, awry structure without a “straight line in the place.” But with the ‘improvements’ came a new steel framework which straightened everything up and lost most of the original building’s eccentric charms. 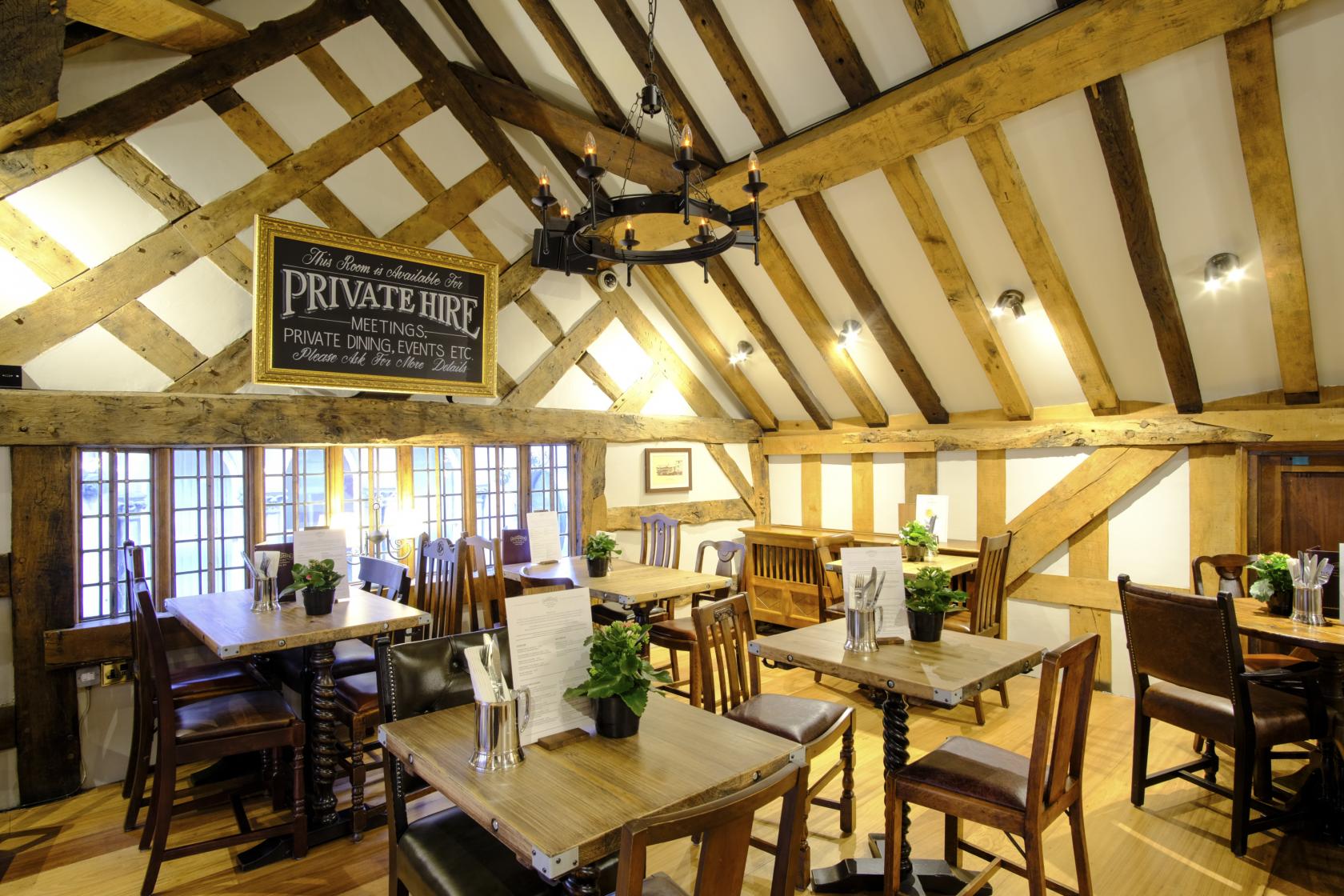 After £500,000 worth of damage from the IRA bomb, the whole pub was subsequently dismantled and moved, along with Sinclair’s Oyster Bar to create a new city area – Shambles Square – part of a wider re-development of Exchange Square, the Shambles and the Corn Exchange building.

So after all of that, it is in fact The Sawyers Arms that is the oldest pub in Manchester – so next time you’re walking down Deansgate, pop in and order yourself a huge mug of mead. Or failing that – just a Fosters to avoid looking silly in front of everyone. 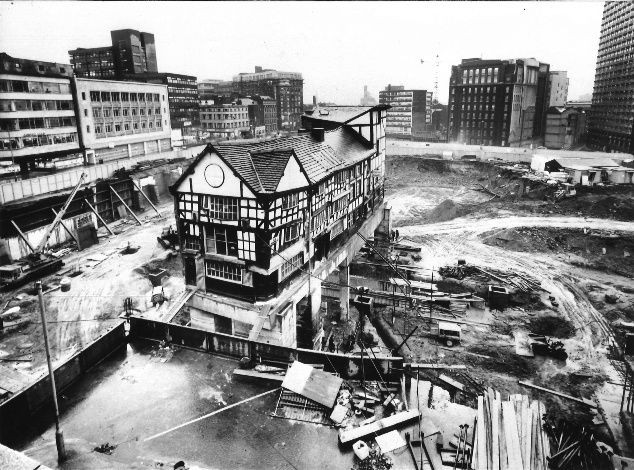 I would also highly recommend a visit to the Old Wellington Inn too actually. It’s a great boozer and the building still has considerable charm.

It’s great to sup a pint and eat some Cheese & Onion crisps in a building with such a long and varied history, and just thinking of the sheer number of Mancunians who have sat in there and got hammered with their mates.