They've added a few new absolute corkers to their menu to enjoy inside... 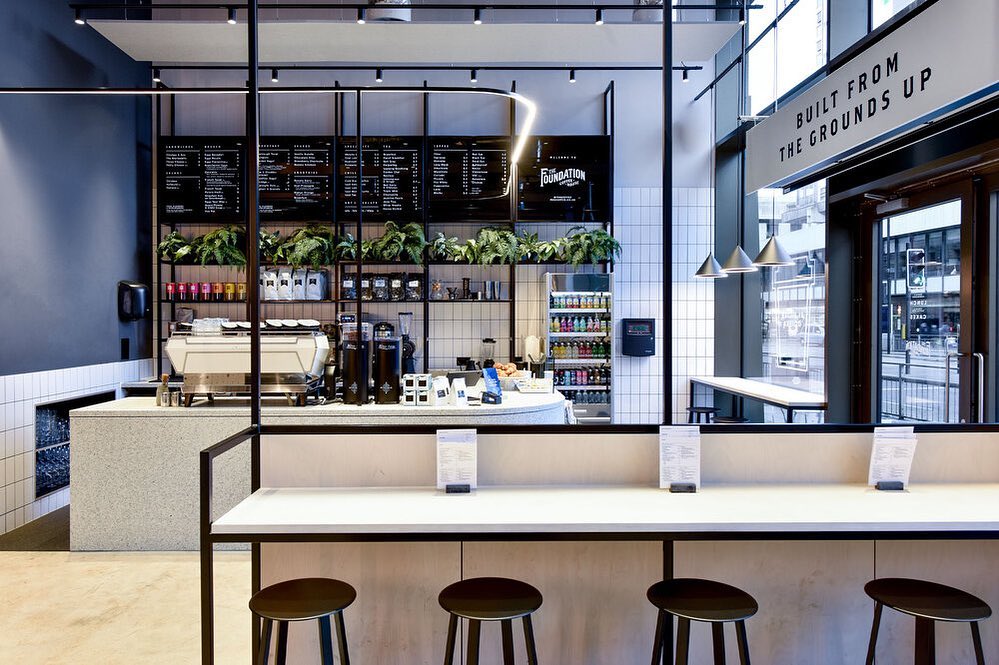 We all LOVE Foundation Coffee House here at Finest. Not only is it (very conveniently) directly opposite our office, but it’s easily one of the best coffee and brunch joints in the city – and they’ve added a few new dishes to their food menu that’s set to take them even higher up in everyone’s estimations.

I should mention at this point that Foundation isn’t ONLY in the Northern Quarter – they are in fact also at Whitworth Locke and on Portland Street – both of which are also truly wonderful places to have some world-class coffee, a lovely bite to eat and flick through the latest issue of ‘Woman’s Own’. 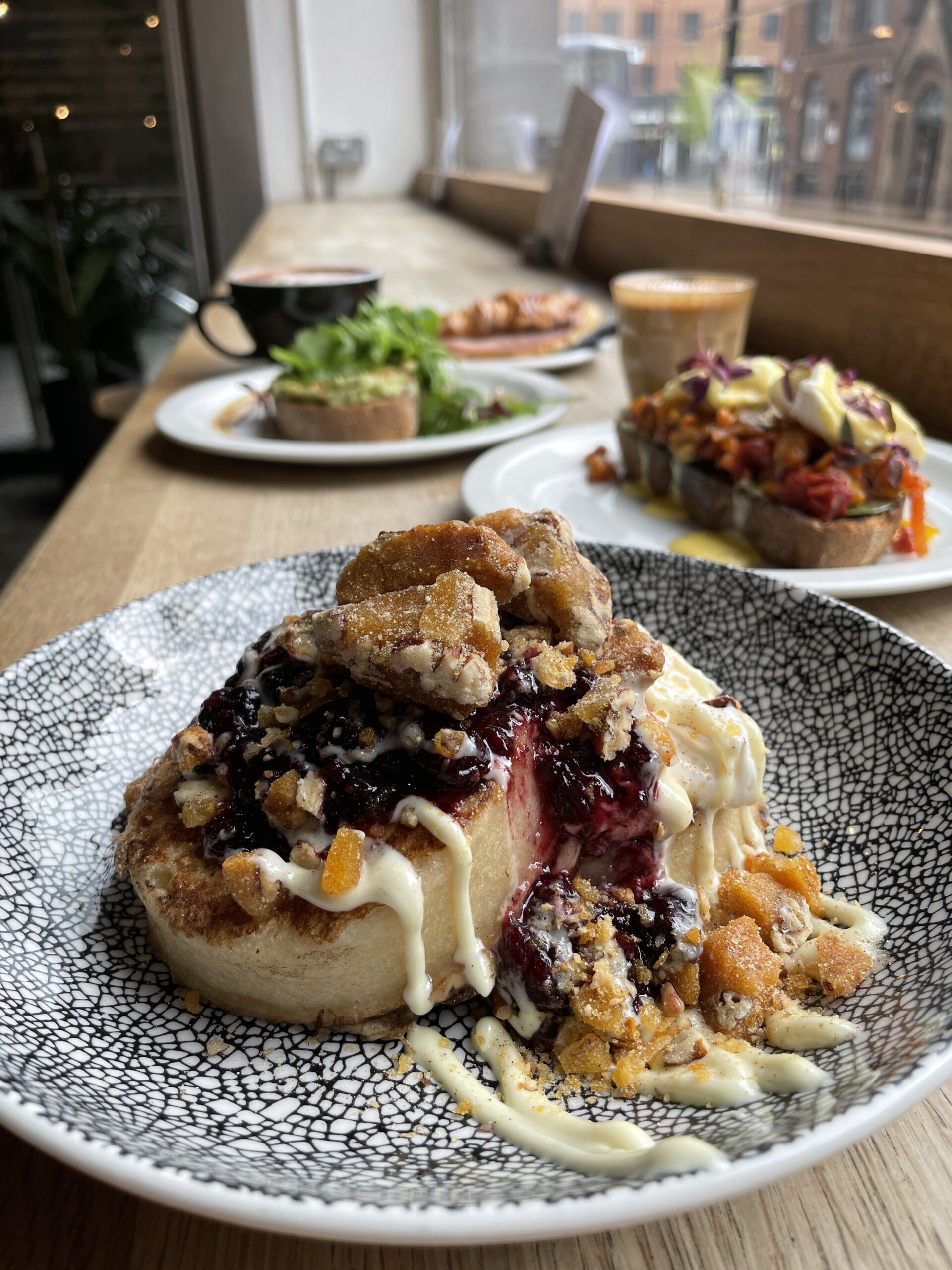 Now, when I heard about one of the new dishes on the Brunch Menu at Foundation, I literally ran over the road, fork in hand. On the menu it simply says; “French Toast” – but my friends, this isn’t just any old French Toast, oh no.

THIS French Toast (£8) is made using a Chai spiced CRUMPET and it’s actually one of the greatest things I’ve ever eaten. 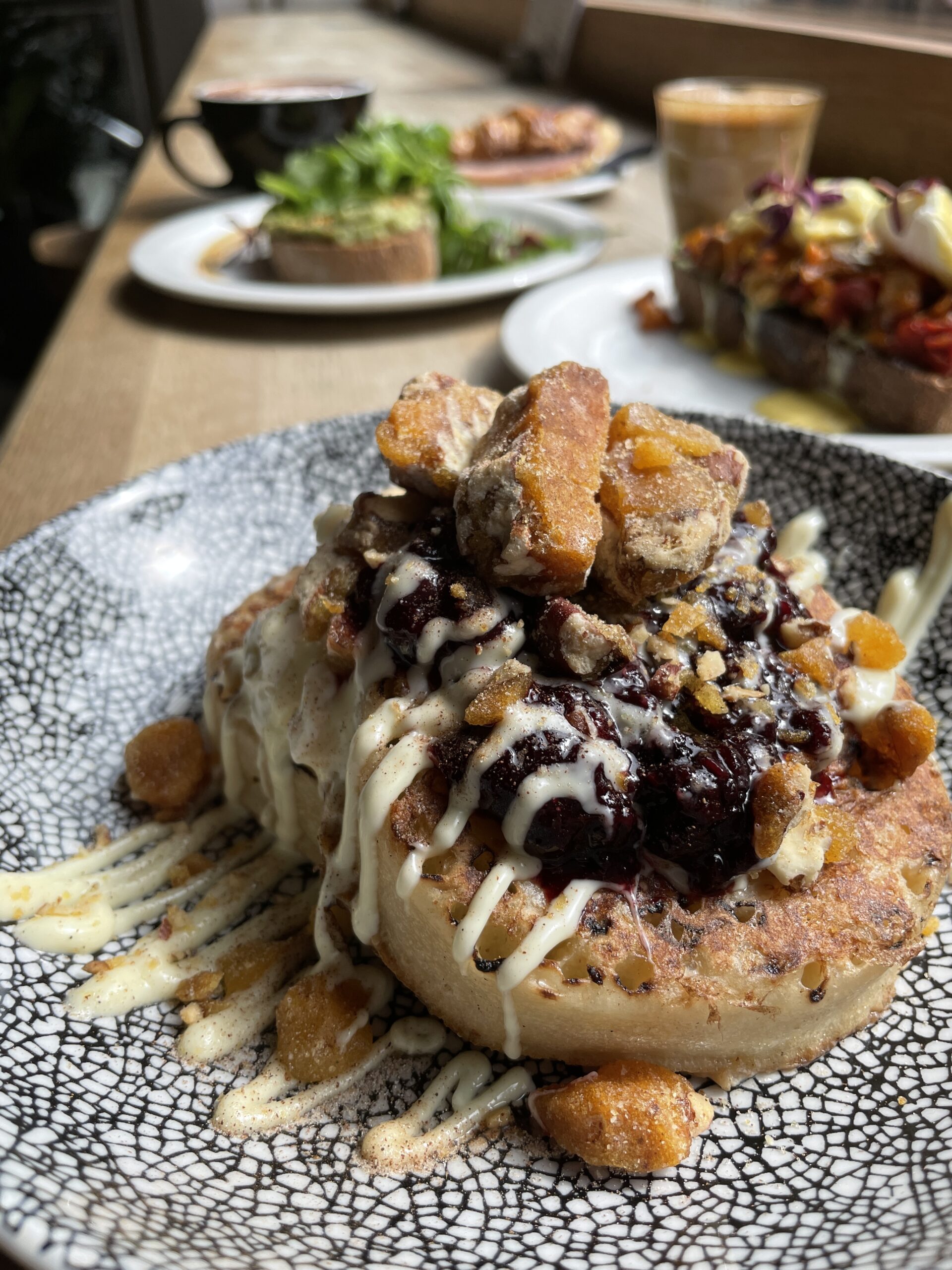 I’ve been a fan of the ‘Eggy Crumpet’ ever since Jamie Oliver started banging them out a few years back – but Foundation have taken this as a starting point and improved on it in every way imaginable.

Once dipped in beaten chai-spiced eggs and then lightly fried, the crumpet is then topped with a homemade berry compote and cinnamon sugar, and a pecan brittle that took me back to being a kid and ordering “a quarter of peanut brittle and some bon bons please mate”. 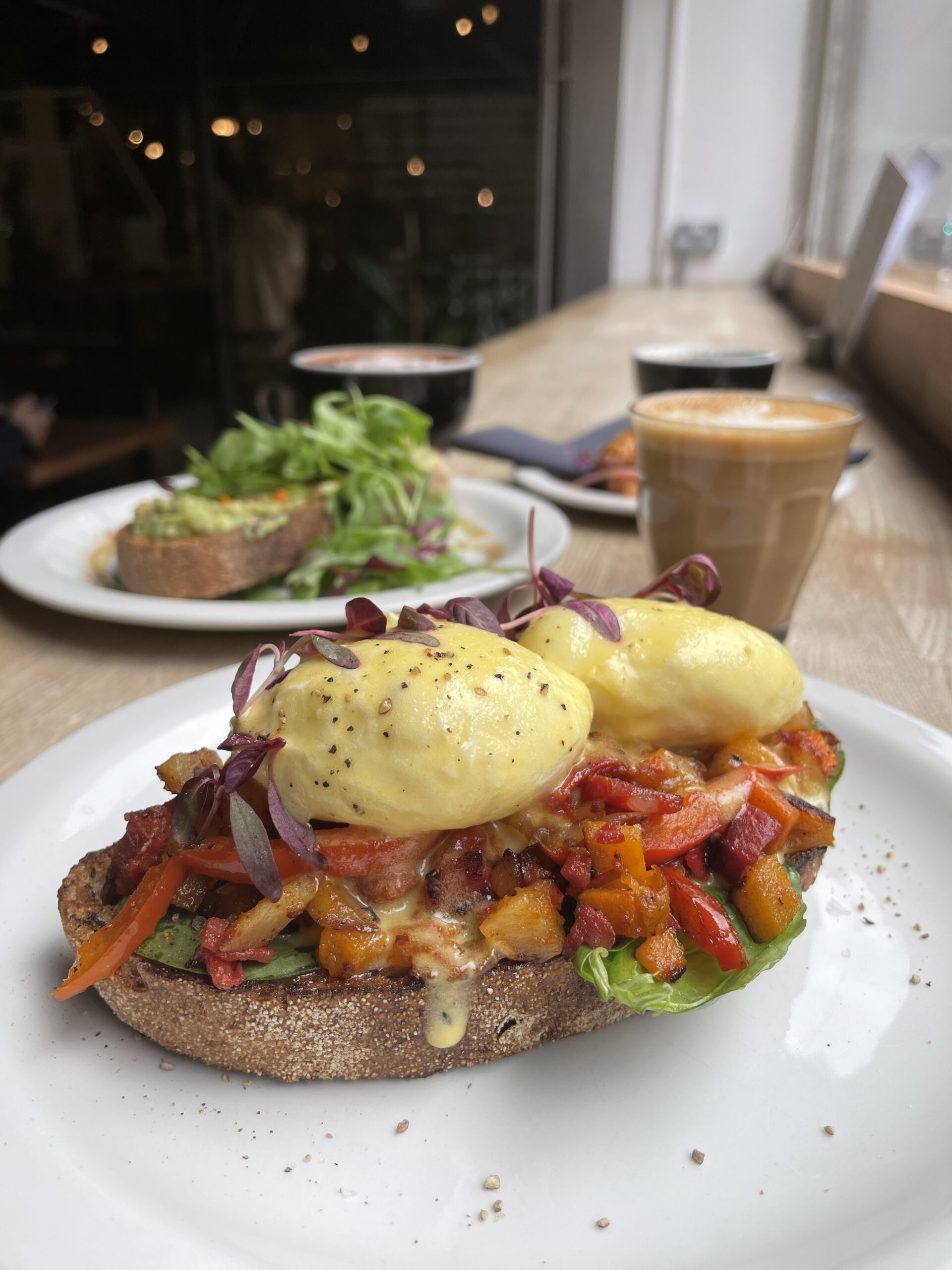 You can also add bacon to this bad boy if you’re feeling adventurous and/or hungover.

Also on the menu is an impressive Foundation Benedict (£9) – a combination of two of the best brunch foods ever made. 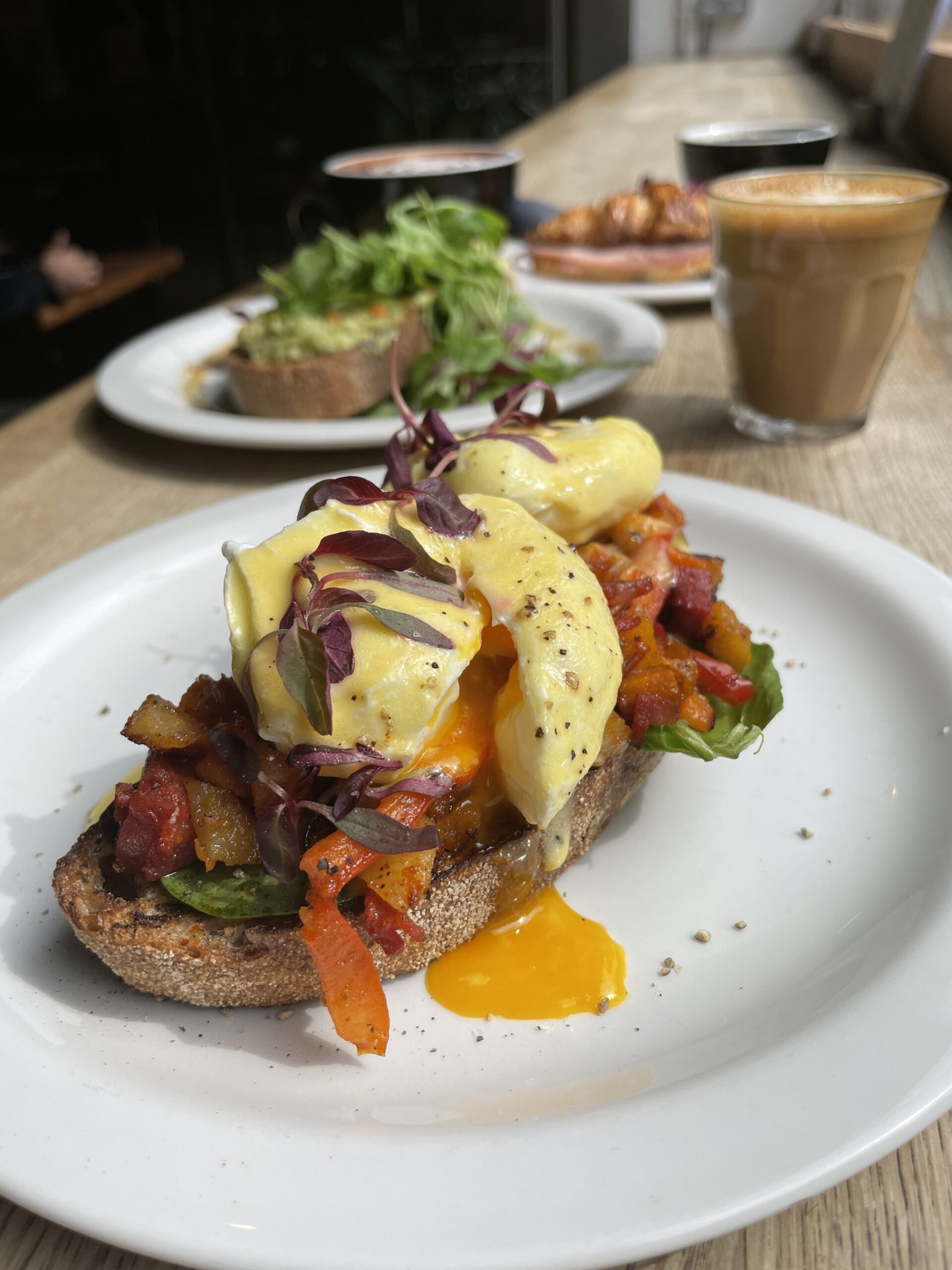 Talking of ‘hash’ – there’s also an impressive Potato Hash (£8) on the menu, one which features not just roasted potatoes but also sweet potato and butternut squash, fried with red peppers, tomatoes, chickpeas and spinach.

It’s almost Foundation’s very own version of a Shakshuka, but with the added carby goodness of roast potatoes. A mix of a Sunday Roast and a super-fresh Middle Eastern breakfast. It might sound weird but it works SO well! 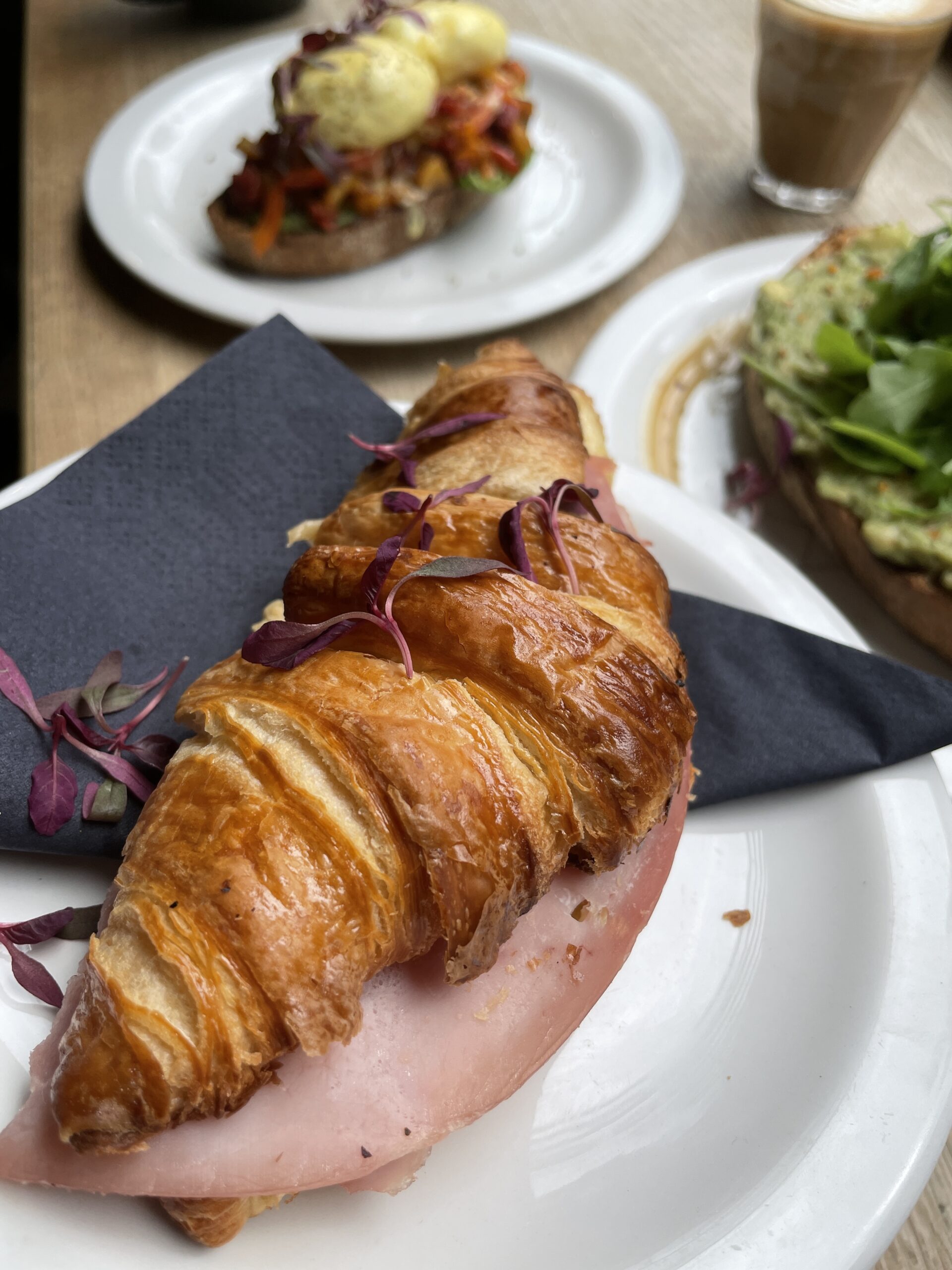 In addition, you’ll also find some cracking Omelettes (£7) including a classic Ham, cheddar and onion opposite a cracking Feta, tomato and spinach beauty. There’s also Seasonal Soups (£6) – which, considering this weather at the moment, is a great idea. 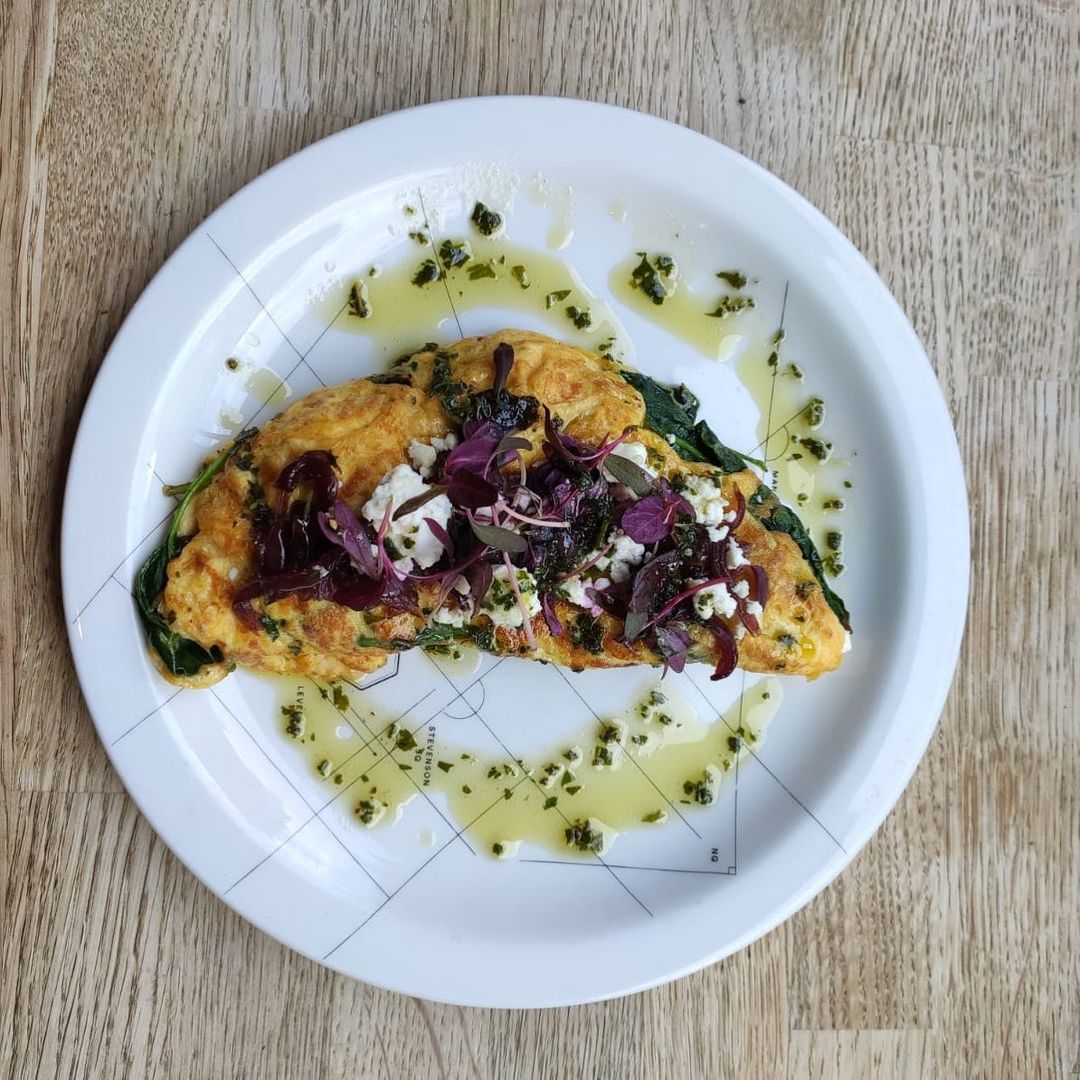 Of course, there’s tonnes more on the menu, including tonnes of breakfast classics, pastries, granola, bagels, smashed avocado, salads and sandwiches. All sat nicely alongside one of the city’s most comprehensive tea and coffee offerings, hot chocolates, smoothies and shakes.

As if there weren’t enough reasons to head back into Foundation, I’ve just given you about 50 there. Although if we’re being honest with each other – we only need one; CRUMPET FRENCH TOAST.