Sweet, Savoury & The Size of a Satellite Dish: What happened to Dutch Pancake House?

One of my sweetest memories of Manchester. 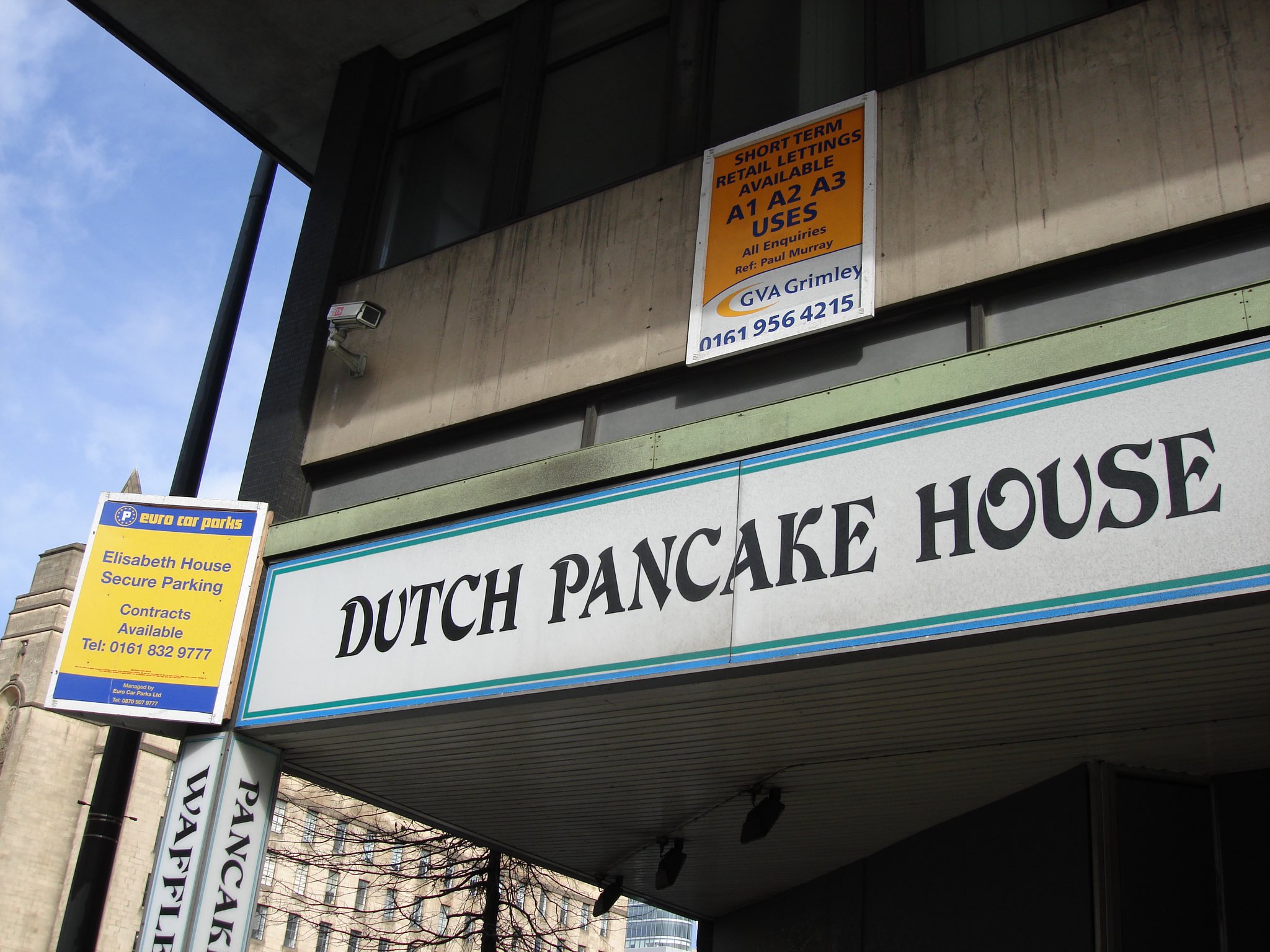 I always passed by the dark, closed space with curiosity and my mouth slightly watering.

Finally, one weekend, when my friend found me sitting on the curb looking at library books I just checked out, he said, “Come on, we’re going.”

These babies are like the friggin’ 2nd place Wimbledon platter. Exact same size. HUUUGE beautiful pancake with sausage rounds within.

I really wish we had more mornings like that, Andrew and I.

We don’t really use Yelp in the UK. It never took off. TripAdvisor was always king. But the ‘review’ above is from there and it’s about a true Manchester institution – one that we all miss every now and then – the Dutch Pancake House on St Peter’s Square.

Ahhhh, pancakes. When I refer to pancakes throughout this article, (and throughout my lifetime) I shall be talking about PROPER pancakes. The big, thin ones. Not the shite Scotch ones or the stodgy American ones. British pancakes for British people. 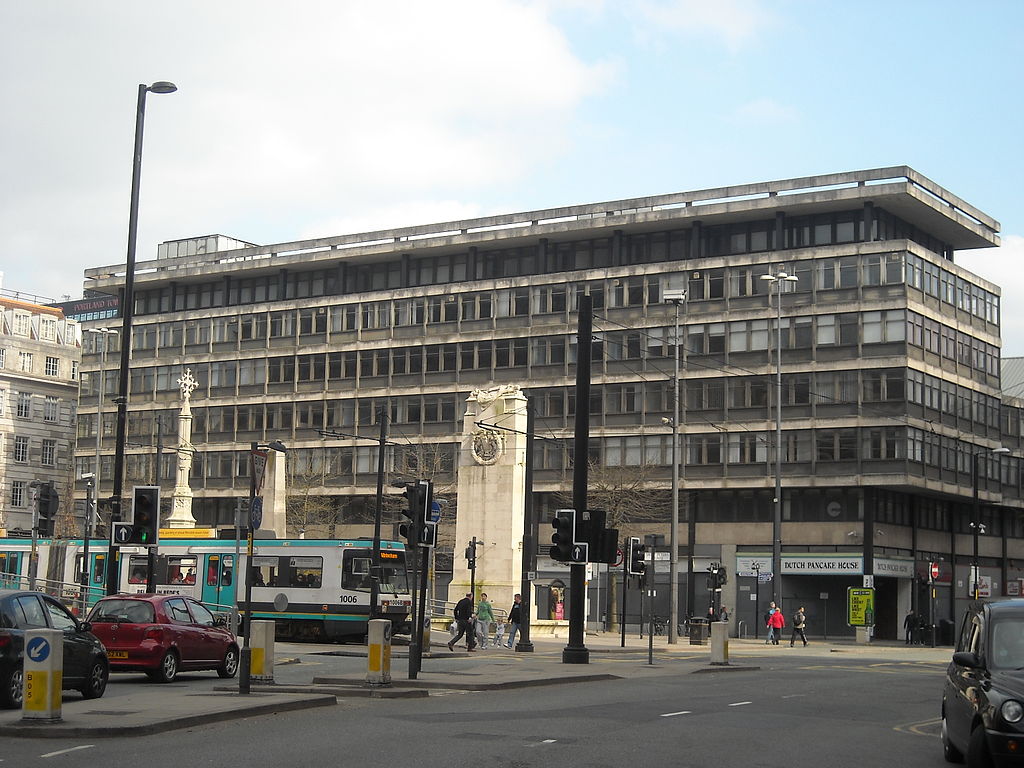 Eurosceptic or not, you can’t deny that our cousins on the continent know how to fry a thin layer of batter – and we shall be eternally grateful for their graft, dedication and strife.

I’m sure many of you look forward to Shrove Tuesday every year – just for the opportunity to stuff your face and provide some quasi-religious reasoning behind the 8lb weight gain at Slimming World.

The legendary Dutch Pancake House on St Peter’s Square, which tragically closed back in “the early 2000s”, provided the people of Manchester with pancakes ANY TIME of the year – and my word – what a choice there was. 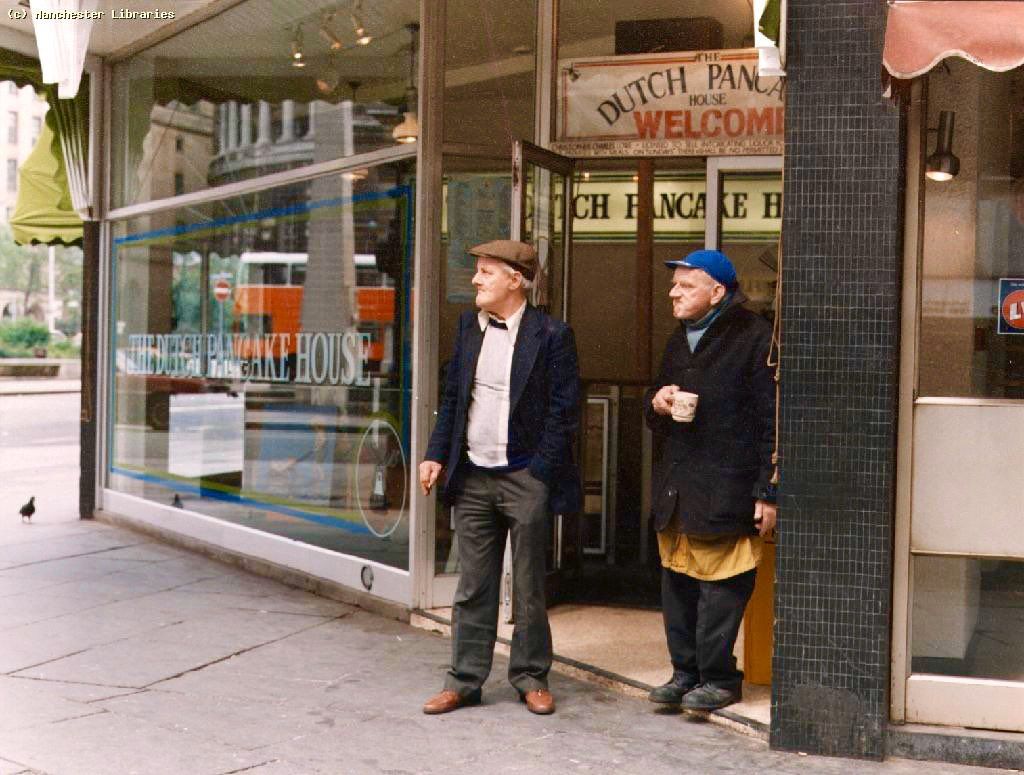 A couple of satisfied customers

Yes, it looked outdated pretty much straight away. Set on the corner of Oxford Street and St Peter’s Square, the entirety of the restaurant was in a basement, which you accessed via a plastic plant strewn entrance and staircase.

It wasn’t exactly welcoming, mostly because nobody likes to venture down into a basement restaurant or bar without some idea of what awaits them below. In addition, the tacky plants started to wash-out in the sun almost instantly – indicating that perhaps this place didn’t care enough about first impressions to care enough about what it slopped onto your plate. 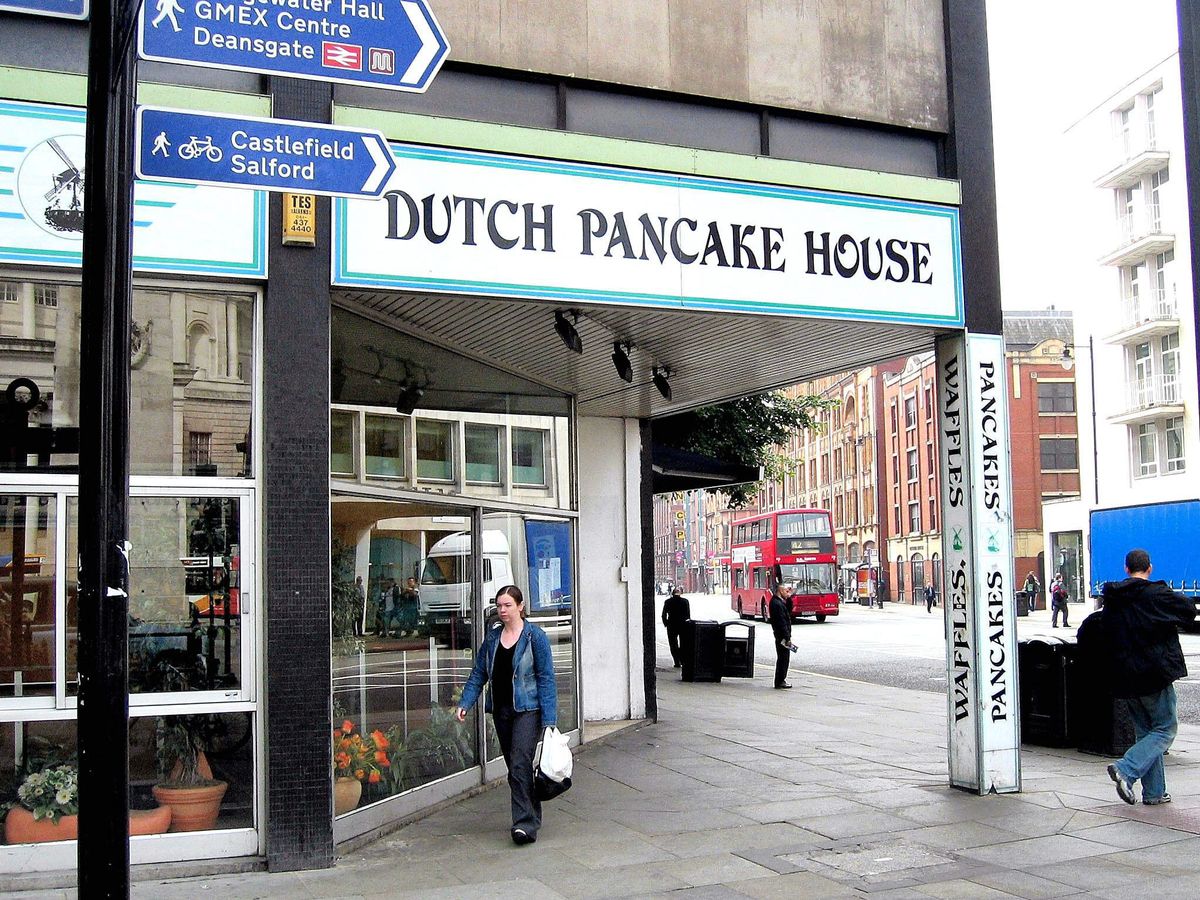 Gordon Ramsey would have seen this place and blown his bloody roof off. He’d have been swearing, kicking children, spitting and once he saw the menu – he’d have certainly punched someone in the face straight away. This menu was big. Like MASSIVE big.

Echoing the eventual size of the pancake that arrived, a PhD was often useful when perusing this menu, and “back in the day” – there were a lot of surprises on there that you might not have appreciated.

People in the 90s and early 00s, especially in Manchester, well, they weren’t quite as exposed to cultures and the exotic as they are today. The internet was still being provided by AOL and many of the city’s most popular establishments served everything with a side of chips. 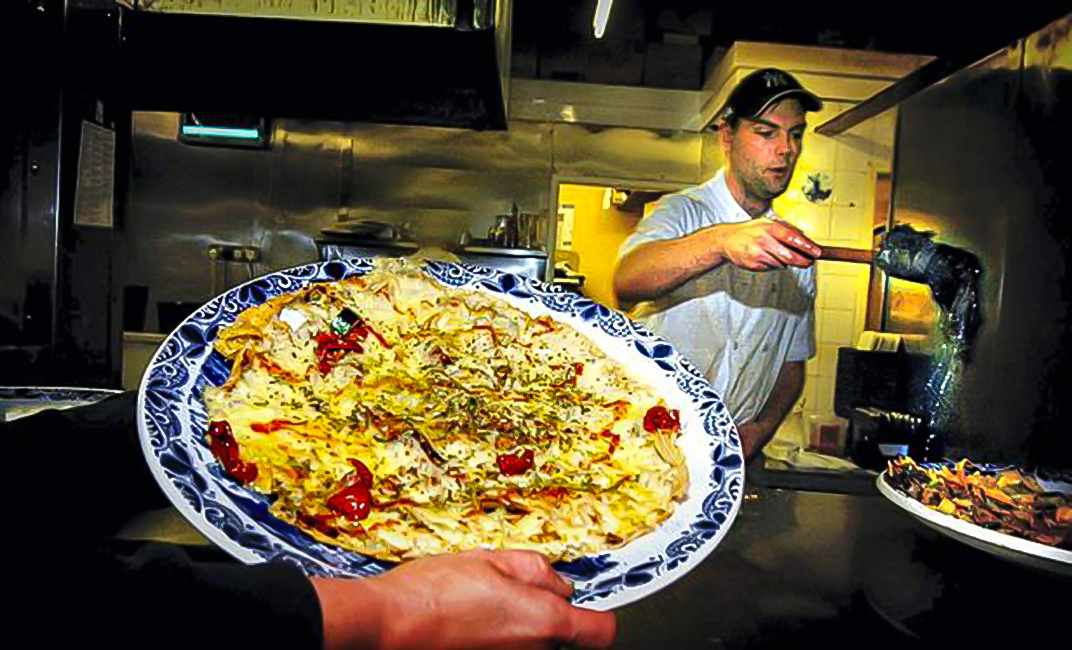 A savoury pancake was almost unheard of. Bacon and Maple Syrup? Certainly not – we don’t mix the two together. Are you bloody mad?! Well, the Dutch Pancake House did it and they did it exceptionally well.

My first and only memory of eating in here was during my first year of University, a time when I was drunk around 76% of the time. I had just weened myself off a diet of Lunch Tongue sandwiches after 18 years in Oldham, and I wanted to branch out a little bit. 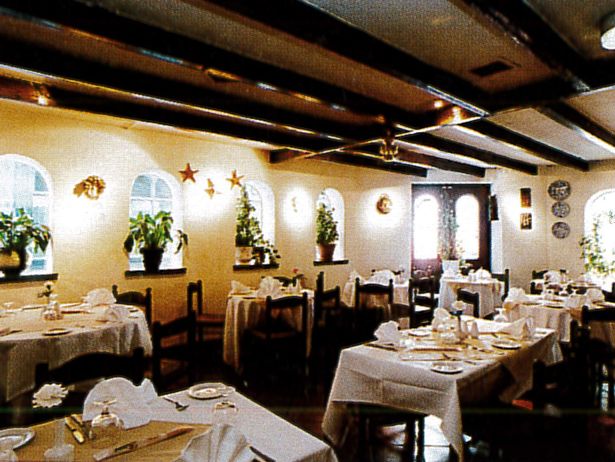 Offal was off the table and instead I opted for a Bacon & Cheese Pancake, something that even then was a novelty. It arrived and my reservations about the fact that it felt like I was on a set for Only Fools and Horses disappeared as a huge satellite dish-sized blue and white plate arrived with a big bloody pancake on it.

10 minutes later I was full and polishing off a pint of Carling Black Label. There was room for an Ice Cream Pancake too – there always bloody is.

It wasn’t long after this though that the Dutch Pancake House finally closed its doors for good. Not that anyone would know though. 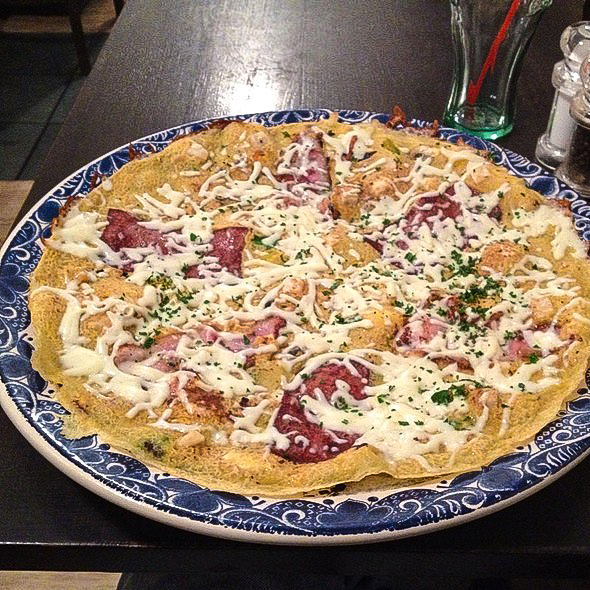 By the early-mid 00s – let’s say around 2003, nobody seemingly knew whether this place was open or not. I’d walk past and it might look open, but I’d try the door and it would be locked. Other times I’d be walking past and see someone scoot out with a big bit of red sauce down the front of their top.

The problem was that the building in which it occupied was set for demolition. Next door was a row of shops that included a Camera Shop and a great offy, both of which were long gone by this point, and even the Odeon Cinema just a couple of doors down was winding up their screenings. 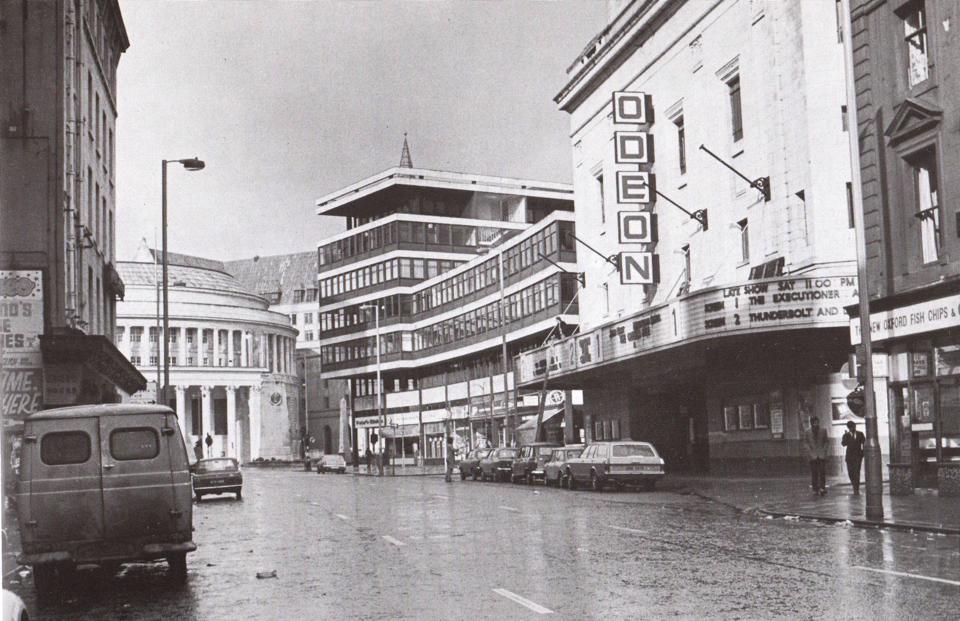 Set for demolition, the complex was eventually replaced by a huge new building – One St Peter’s Square – home to KPMG and a swanky San Carlo Fumo restaurant on the bottom floor.

People haven’t forgotten the Dutch Pancake House though – I doubt they ever will. Sure, the place looked terrible, but the food was surprisingly mega and it was cheap and there was a lot of fun to be had.

Actually, yes, I miss it too. Even though I only went once – it certainly made an impression on me. Here’s one final ‘review’ to see us all off…

I adored this place, even reading people’s notes scrawled on napkins that they had on the wall running the length of the stairs.

I first went around 1989 and it became a traditional place for birthdays and such like. Not been for a long time though, ’cause I moved to the US several years ago.