This summer an immersive site-specific performance project is taking place in Ordsall, Salford. DEEP WATER, part of the theatre’s major Truth About Youth (TaY) programme, has been developed by the Royal Exchange Theatre and 20 young people and elder residents of Ordsall. The inter-generational production has been created with Salford-born writer Reuben Johnson and directed by TaY Associate Artist Alex Summers. DEEP WATER will be performed, promenade style, in and around a working riverside warehouse known locally as Graffiti Palace, Salford on Fri 28 & Sat 29 August.

Ordsall, Salford, an island of red-brick terraces amidst the glass and steel of modern buildings. With roots as deep as the water that runs beside it; it was the beating heart of the dockside, a place of neighbourhood bonfires and exhilarating rites of passage. In recent years major redevelopment has started to reshape Ordsall, new homes, shopping facilities and hotels have been constructed with future plans for more. But how does this regeneration impact existing residents?

“I can’t see these houses being here in a few years to come. They’re building round us and we’re in the middle. I think they’ll get rid of Ordsall, definitely” A DEEP WATER participant

DEEP WATER is a modern-day narrative exploring the thoughts and feelings of 20 individuals in a rapidly developing city.

This spring, as part of Truth About Youth, the Exchange worked closely with Salford Children & Young People’s Services, bringing young people together with elder residents of Salford to create a space for conversation about their passions and their community. From these discussions DEEP WATER emerged, a production that explores everything from the history of the dockside to perceptions of community and the exhilaration of open-water swimming in the quays.

“Your feet hit the water and hurt; that’s how high you are… if you hit the bottom, it’s a long way to come back up for air.” A DEEP WATER participant

Reuben Johnson is an English actor and writer. He is the co-founder of production company Fiddy West Productions. He grew up in Salford, Greater Manchester. Reuben Johnson was shortlisted for the Alfred Fagon Award in 2009 for his play TERRITORY. TERRITORY went on to win the National Student Drama Festival and Methuen Drama Award for Emerging Artists, Best Ensemble and Best Producer.

Alex Summers is a Truth About Youth Associate Artist for the Royal Exchange Theatre. Truth About Youth projects include AT NIGHT, FROM THE STREETS and coming this November, TAY TALKS. His directing credits include COME CLOSER and HUNGER FOR TRADE (Royal Exchange Theatre), A LETTER TO ENGLAND and DEATH OF LONG PIG (Finborough Theatre), THE MAN OUTSIDE and THE INSECT PLAY (Theatre Royal Haymarket, Youth Company). As Assistant Director, BILLY LIAR, BLACK ROSES and ALL MY SONS (Royal Exchange Theatre). Training includes MFA Theatre Directing (Birkbeck College, University of London) & National Theatre Studio Directing Course. 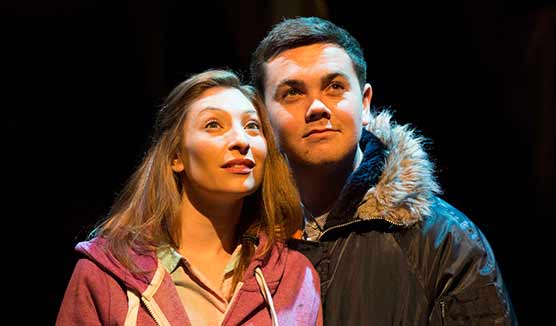