I had a vodka in one hand, and a flag in the other. I was stood in a huge inflatable church, complete with authentic brickwork, Gothic architecture, and stained glass windows. I peered on my tiptoes over to the altar, to witness a priest that would make Roy ‘Chubby’ Brown embarrassed as he wed two seemingly rather drunk strangers. The ceremony finished, with the happy couple stumbling through the crowd, to riotous cheers and whistles. Were they really married? I asked myself. Would they come to regret this day, much like Britney in Vegas? Do they care? Probably not I thought, because this was Pride Weekend in Manchester.

The Pride Weekend has become somewhat of a tradition for me over the last six years or so. It manages to incorporate everything that I enjoy about a bank holiday; plenty of booze, loads of people, some great (and not so great) music, and an atmosphere which is difficult to beat.
The Big Weekend began this year, as it always does, on Friday with the big belter Anastasia. Famous for her hits ‘I’m Outta Love’ and ‘Not That Kind’, and her massive, almost bloke-like voice, this was a surprisingly excellent coup-de-grace for the organisers this year. Although her star power has waned considerably over the years, she is still relatively well known, even in many of the non-gay quarters of society. Needless to say, her performance was as expected; polished, professional and loud.

For many, the Pride weekend didn’t begin until the Parade, which snaked its way through the City Centre. I missed it last year, and so was adamant I would get my waving arm into shape and get a good spot down on Princess St. By around 2pm the Parade reached where I was stood, with the obligatory mini and celebrity forerunner. This year it was some woman off of Orange is The New Black which was rather disappointing to me seeing as I have never watched it. As people around me were shouting and waving in jubilation, I just gave myself a quick think back to when Ian McKellen was in the same car, feather boa around his neck, waving back and smiling at me. One of my greatest moments in life so far. As the Parade progressed, the crowd was subject to all manner of participants; from the famous (Corrie), to the Political, to the Helpful (NHS), to the butch (Fire Service). I have said this before though, and I will say it again, there were an awful lot of really rather dull, boring or commercial entries in the parade, which I get the impression are clearly just there as a marketing exercise as opposed to any real support or recognition of LGBT issues. For example, Enterprise Rent-A-Car had one of their gleaming vehicles driving through the Parade, but so what? What a thoroughly mundane and uninteresting addition to the parade that, from my perspective takes away from the true meaning of the event and quite frankly overshadows the effort that other participants and institutions went to.

Once the Parade had finished, festivities continued inside the Main Area, with the streets packed with people, creating a great atmosphere to have a drink, dance, chat and generally have a top time. There are two main arenas – Sackville Gardens (home of the aforementioned Church) and the Main Stage in the Car Park opposite the Thomson Arms. Throughout the Canal Street area is dotted plenty of eating, drinking and dancing establishments, as well as a nice, nifty little market.

After a top couple of hours walking around, chatting and dancing (to S Club 7 in New York New York I may add), we headed to the Main Arena to catch some music. Now this years’ big draw on Saturday was Pixie Lott, who performed her songs with some considerable gusto, while wearing a Madonna-esque cone bra. Despite the fact that it was pretty nippy (after a lovely, sunny day), the atmosphere and performance was excellent. As were the other acts who preceded her. Of note were the fantastic All About She, a personal favourite of mine. When Manchester ‘legend’ Rowetta came on stage in the afternoon it was proclaimed by some that she would be at the opening of an envelope if you invited her, but despite some Grace Jones-esque plagiarism, it’s always nice to see her still getting outdoors and enjoying herself.

It was much of the same on the Sunday, except with clearly bigger crowds. Today was the headliners’ turn to show their mettle, with personal highlights coming from the formidable Conchita Wurst and alternative girl-band favourites All Saints. Now, my first ever concert was in Rhyl with my mate Ste McDonald, and we watched All Saints. I will always remember it because a) it was my first concert, b) David James was sat a few rows in front of me and c) All Saints were bloody brilliant and I loved them. Did they still have it though? Well, judging from their performance on the Sunday night, we can wholeheartedly proclaim that indeed they do. I was slightly worried that they would do ‘A George Micheal’ and sing a load of crappy new songs while I shouted “Play something we know” but happily this was not the case. All the greats were in there, with a final cherry on top being the combat trousers. Their whole set was choreographed from start to finish, which showed that the girls had clearly put in plenty of effort to put on a good show. The Saints were preceded by the frankly excellent (and fit) Foxes, and the equally fun (and fit) Conchita Wurst. I’m a big fan of the ridiculousness of Eurovision and Conchita did not let the crowd down.

Monday unfortunately was a bit of a wash out with the weather, but reality TV (and Pride) staples Lucy Spraggan, Micha B, Marcus Collins and Amelia Lily all provided the music in the Main Arena. There were of course many other performers and events that I did not get chance to see, but that is the beauty of Pride. It’s a festival within the city centre of the greatest city in the world. It is a festival with so much to offer in the 4 days, that it’s impossible to see and do it all. Of course, there will always be critics of the whole event, in particular the contributions that are donated to LGBT initiatives in the city, but as an innocent bystander; someone who enjoys a right good knees up, you can’t go far wrong with Manchester Pride. 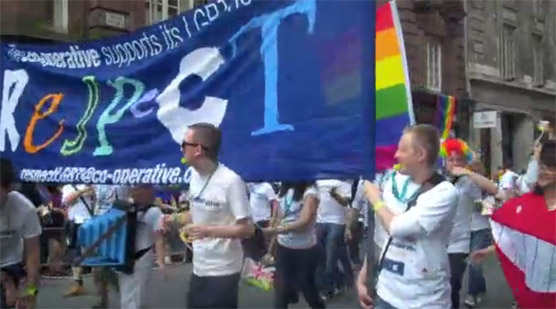