The 15 most Instagrammable places in Manchester

If someone from the future told you 15 years ago that most people would communicate with their friends via little pictures which unnatural, weird colours on them you’d probably decide not to sell your Pokémon cards and keep them in a vault somewhere. To be fair, they still might be worth a fair bit of money, but future-boy would have been talking about Instagram – here’s the most Instagrammable places to get yourself in Manchester.

Been living in Manchester for two years and only just now got around to walk over here.

Salford Lads Club
It’s safe to say that this is one of the most iconic buildings in Manchester, if not the UK. Made famous by being featured on the LP sleeve of The Queen is Dead, the club has become the main stop in any Smiths’ fan pilgrimage to the city. The famous front door will give you the perfect picture opportunity and potentially plenty of likes you shallow sod.

Northern Quarter Street Art
Any prolonged walk around the Northern Quarter and you’re sure to stumble across some pretty impressive street art that you can turn into likes. Not satisfied with every bar having exposed bricks; if there are any outside on the street it’s likely that they’re going to be covered in some recently popular art and over the last few years we’ve had plenty. The old public bogs in the centre of Stevenson Square have been home to some corkers including Hannibal Lecter, Winehouse and David Bowie, while the little bit of concrete on the corner of Thomas Street and Tib Street has been adorned with Prince, Tyrion Lannister and Walter White to name a few. My personal favourite is still the Frank Sidebottom outside Turtle Bay on Oldham Street which is brilliant and would definitely make a great Insta post with a decent filter.

Affleck’s Palace Mosaics
I imagine it’s impossible for Mancunians to walk past the famous ‘On the 6th day…’ mosaic without pulling their phone out of their parka pocket and taking a snap. Every social media account within a 5 mile radius of Affleck’s must have this on there somewhere, and to be fair it’s clear to see why. A few years back they were taken down and a million Mancs had to find something else to take a picture of. But they’re back and there are even more of them down Tib Street too. Created by Mark Kennedy they are a brilliant representation of many of the cultural, sporting and historical icons from Manchester’s past including Corrie, Tony Wilson and The Suffragettes to name just a few. Next time you’re in the area buying a new belly bar from Affleck’s, make sure you catch a quick pic for Instagram.

Food at Altrincham Market
There’s enough critique online of the kind of people who spend 6 minutes taking various photos of their food before eating it in order to put it online so I won’t bother. It’s safe to say that Altrincham Market provides the perfect setting in which to do this, with the Grade II listed market house being the perfect backdrop for some lovely looking food. Pizzas from Honest Crust, pies from the Great North Pie Co and chocolates from Sam Joseph are all there waiting for you to add a filter to. I hope they go cold before you get a chance to eat them.

Manchester Bee
I’ve said it before and I’ll say it again here – the Manchester Town Hall is a truly stunning building, both inside and out. The only thing that ruins it is the fact that it is used by the Council as a dungeon in which to cut many vital services throughout the region while spending millions on unnecessary vanity projects. Politics aside though, the building is adorned with many fantastic examples of the famous Manchester worker bee in mosaic form, providing the perfect opportunity for you to show that you are a true Manc and that you are cool enough for a couple of likes. So cruise on down to the Town Hall, have a look around, check out the Ford Madox Brown Manchester Murals and take a few snaps of the bee while you do so.

Alan Turing Memorial
Alan Turing was a bloody legend, not only did he look exactly like Benedict Cumberbatch but he was also integral in winning the war by cracking the Enigma machine down at Bletchley Park. Considering he is now also considered the father of computer science, his treatment as a homosexual is even more damming. Unfortunately he committed suicide after being chemically castrated for his sexuality, so he will never know both his profound impact on the world and the love that his home city and LGBT community has for him. The memorial on Sackville Gardens is a fitting tribute to a man who did so much, and received so little back. The least you can do is take some pictures and educate others eh!?

United Trinity
There’s a statue of three footballers right opposite the Man Utd Megastore in the North Stand that provides the perfect Instagram opportunity for any United fan. Called the ‘United Trinity’, it depicts Georgie Best, Denis Law and Bobby Charlton chilling and posing because they loved football so much and were really good in the 60’s. I think it’s clear that I don’t know (or care) much about football, but if you stand behind the statue you can get a fantastic shot of the three players looking ahead to the North Stand with the neon ‘Manchester United’ sign directly overhead.

Tattu
When Adam and Drew Jones opened up Tattu in 2015, they inadvertently created an Instagram paradise with so many filter and Boomerang opportunities that a repeat visit is usually necessary. Not only are the meals and cocktails a work of art fit to grace anyone’s Instagram feed, the restaurant is dominated by a 4 metre-high cherry blossom tree which provides a truly spectacular picture opportunity. I’ve heard that the flowers on the tree change colour as the seasons change, so you’re going to get at least 4 pictures out of this one.

The Iron Bridge
Another Smiths one because I really like the Smiths OK!? ‘Under the Iron Bridge we kissed’ is the line in ‘Still Ill’ and this is the bridge that Old Moz was talking about. Although we may never know if the Smith’s front man got any further than a tonguing under here, I doubt there’s much stopping you from getting a good grope with your loved one too. There’s always plenty of Instagrammable Smiths graffiti here too for you to post you loser.

Alleyways
There are an abundance of disgustingly beautiful alleyways in Manchester which provide the perfect opportunity for an Instagram post. Walking around the Northern Quarter will pocket yourself a few corkers, including the famous ‘Captain America’ Brooklyn street one on Dale Street. An honourable mention should also go to China Town, which probably has the best, most disgusting alleyways in the city which manage to provide a serene, almost unique insight into city life as well as giving you the opportunity to smell some wok fat mixed with grid water.

#bbc I've found the new #doctorwho for you

Media City @ Salford Quays
If you happen to find yourself at Salford Quays, perhaps you’re attending a showing of Jeremy Kyle because your boyfriend has been sleeping with the next door neighbour’s pedigree greyhound, you should pop into the foyer of the BBC for a great Instagrammable opportunity. Basically there’s a TARDIS here off of Doctor Who, and if you take a picture with it and pop a couple of geeky hashtags in there, you’re guaranteed plenty of likes from lonely Whovians looking for their first girlfriend. And considering what your boyfriend has been up to next door – you should probably take them up on whatever they offer.

Vimto Park
Located right next to the old Vimto factory on Sackville Street (a stunning building itself), Vimto Park has been a firm favourite place for many to chill with a bottle of White Lightning on a sunny day and aggressively shout at passers-by. The park is home to a rather large bottle of Vimto celebrating the heritage of probably one of the greatest drinks ever. People who drink Ribena are savages – everyone knows that – and you can prove you’re not one by taking a picture and putting it on your Instagram.

Beetham Tower
During my research for this article I saw so many pictures of the Beetham Tower I could probably draw the bloody blueprints off of the top of my head. So from this evidence it’s safe to say that if you don’t have a picture of the Beetham Tower on your Instagram, most likely followed by a comment mentioning the weather or a sunset, then you’re not a true Mancunian. Being the tallest building in the city provides you with an endless supply of angles and other buildings in which to juxtaposition it against to offer a keen and biting critique into the unrestricted development of our inner city brown sites. Either that or you just want to show off the new filter that came with the latest update of Instagram yesterday.

Stan the T-Rex @ Manchester Museum
Ever since Spielberg decided to breed extinct animals from frog DNA, film them and then shamelessly abandon them on that island people have been pretty excited over dinosaurs. In reality they looked nothing like they did on screen – being too large and lacking some serious feathers and wings – but people still love them. King of the Jungle the T-Rex is of course the most famous of all dinosaurs, (except Denver) and so Stan in the Manchester Museum will give you plenty of likes from your Insta followers. But don’t just go for the picture of the T-Rex. The Museum has a truly fantastic collection of ancient artefacts and unique attractions that you can have a look at and learn something new. Unfortunately it may involve some reading above 140 characters so take some water in case you get a headache.

Toilet Grafitti
As a personal favourite of mine, toilet graffiti manages to straggle the fine line between political satire and playground bullying providing you with the perfect reading material should you forget to take your copy of Now! Magazine to the toilet with you. My recommendations go to The Temple on Oxford Road, and The City on Oldham Street. It’s always changing though, and you can never be sure where to find it – that’s what makes it the most exciting point on this list.

If you see some good stuff in Manchester, tag us in it @mcrfinest because we love it. 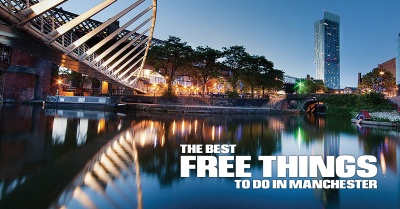 24 FREE things to do in Manchester