The Waterside Arts Centre have announced a brand new ten day Summer programme jam-packed with experimental performances, music and events which will aim to appeal to visitors of all ages and challenge them to see things differently.

Refract:17 runs from Friday 21 to Sunday 30 July, bringing together a carefully curated programme with highlights including performances inside a giant bird’s nest, inspirational theatre on a trampoline, thought-provoking and intimate shows inside a static caravan and interactive gaming on a mega scale. Here’s a list of what to expect:

Complementing the theatre offering is a series of genre-defining live music gigs from acclaimed artists and festival favourites. Salford powerhouse Ren Harvieu, with her breathtaking vocals, is no stranger to the Manchester music scene, and has appeared on Later with Jools Holland and performed with the BBC Philharmonic Orchestra.

Mind-blowing Mr Wilson’s Second Liners, fuse New Orleans jazz with 90s club classics, and come together for a special gig with Felix Hagan and the Family, who are fresh from touring with Frank Turner and complete the bill with their musical-theatre meets high glam pop set.

Bringing in the Blues, King Pleasure & The Biscuit Boys will kick off the festival with one rocking night. In a year which marks their 30th on the road, this internationally acclaimed band boast a phenomenal career that includes opening for B.B. King, Cab Calloway and His Orchestra, Ray Charles, and tours with the Blues Brothers Band.

For the traditional music lovers – but with a twist- exceptional all-female band The Shee showcase their powerful and emotional vocal range and instrumental prowess this summer with a one off gig that even promises a spot of clog dancing amidst the Gaelic ballads and hypnotic riffs. And if this is not enough to get your musical taste buds tingling try virtuoso Spanish guitarist Eduardo Niebla, or BBC Radio 2 Folk Award Winners The Demon Barbers who fuse disco with folk.

Flit, Flap, Fly
Something a little different for little people – Flit, Flap, Fly is a squawking adventure set inside a giant bird’s nest bursting with live music, audience participation and birdsong as it follows a young bird’s frantic and funny journey towards independence.

Mobile
Part theatre and part life lesson about class in modern Britain, this intimate, visual and powerful show is staged inside a caravan – exploring our sense of home, belonging aspiration and the realities of social mobility.

WiFi Wars
Wi-Fi Wars is a live comedy game show where you play along! Log in with your smartphone or tablet (make sure you’ve got plenty of battery!) and compete in a range of games, quizzes and challenges to win the show, and prizes!

Anyday
A trampoline based theatrical performance telling a charming and comic tale complete with clangs, boings and unbearable hope to make our spirits soar. Get pulled deep into the intimate world of Max and his bird on his trampoline. Comic, absurd and surreal, Anyday explores the archaeology of loneliness with light, darkness and ultimately joy.

Stuff
In Stuff, Cirque du Soleil clown Sean Kempton, mixes mime, clowning and comedy in this playful and physical show about another kind of love story – playful, funny, sad and familiar. Sean has created a non-verbal 60 minute solo show about love, developed from interviews of people from the ages of 6 through to 84 on the subjects of Love and human connection.

Melancholy
Award winning theatre company Certain Dark Things use an imaginative combination of puppetry, physical theatre and animation to tell the story of one man as he treads the fine line between genius and insanity.

Goblin’s Peter and The Wolf
Peter and Grandad have gone camping for the weekend. Grandad says stick to the camp-site but Peter has other ideas… Join Peter on a hilarious adventure through the fields and forest as he discovers new sounds and noises. A brand new show with amazing music created live with a variety of instruments and objects, including real musical vegetables. Combined with imaginative puppetry, physical comedy and fun interaction, the show will have children ages 4+ jumping for joy.

Aleena’s Garden
Aleena’s Garden is an interactive sensory adventure through the seasons for early years and their grown ups. Underneath the canopy of Aleena’s Tree, the young audience will be led on an exciting journey through the natural world with lights, sound, touch, smells, original music and simple signing.

BBC comedy stalwart Jan Ravens comes to Refract:17 with a preview of her brand new Edinburgh Fringe Show, as well as comic poet genius John Hegley and award-wining comic Andy Kirkpatrick. Other Refract:17 delights include Dylan Thomas’s timeless masterpiece, Under Milk Wood and Waterside faves Comedysportz, plus drop in activities for all throughout the ten days.

Full information on Refract:17 is available via refract.org.uk 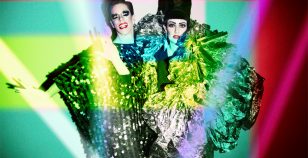