Following the success of last year’s event, which featured some of the best British indie and alternative rock bands; Primal Scream, Black Grape and Badly Drawn Boy, this year the festival aims even bigger with not 1 but 2 days of British music.

The Horrors
It’s time for English psychedelic electro-rockers, The Horrors. Yes the Southend quintet are still going. They return to Manchester and play the pre-headline slot on the main stage, their hour-long set showcasing tracks from their brand new fifth album ‘V’ as well as some fan faves. “It’s a pleasure to be back in Manchester!”

They start by going into the third track ‘Mirrors Image’. As their set progresses the stage is filled with smoke and lit red with strobes pulsing with heavy bass and doomy garage-rock, the atmosphere changes to psychedelia electro as the band perform an energetic set. They move onto playing ‘Colours’, ‘Scarlet, ‘Endless Blue’ and their new track ‘Something to Remember Me By’. Frontman Faris Badwan and guitarist are proper rock stars with their rock swagger, leather jackets and head banging – the perfect warm up for White Lies.

Prose
Local lads Prose take over the stage in Room 2 for the penultimate set of the night. After being voted ‘Citylife Best Breakthrough’ in 2015 the boys have come a long way from their bedroom studio in Trafford. The room starts to fill as The Horrors vacate the main stage and a big crowd gathers.

It is a completely different feel, with lead vocalist Mike Murray being a rapper of sorts, more of a hybrid between a rapper and an indie frontman. It works – the crowd buy into it instantly. As if they needed any more the convincing, they embody their style on Red Hot Chilli Peppers cover ‘City Of Angels’. As quickly as the crowd fills the room it disperses, as everyone heads over to the bar before headliners White Lies start.

White Lies
It’s the moment everyone has been waiting for; White Lies time. The festival headliners are welcomed to the stage with a massive cheer from a packed main room. They waste no time and open up with ‘Take It Out On Me’, opening track from last year’s album ‘Friends’. They then follow on with ‘There Goes Our Love Again’, ‘Farewell to the Fairground’ and ‘To Lose My Life’. As the scattered T-shirts come together to sing and dance to ‘Hold Back Your Love’, it truly feels like a climb onto your friend’s shoulders kind of moment.

The fans are loving it – but you do get the impression that the debut album is still the most loved one among the White Lies fans. It ends with a solid peak of energy with final anthem of the night ‘Bigger than Us’ as confetti cannons go off and huge white balls are released into the crowd. It’s a huge finale and the perfect ending for this years ‘British Sound Project’

Foals (DJ Set)
After the headliner, Foals take to the decks over in Room 2. This particular incarnation consists of Jack Bevan (Drummer) and Edwin Congreave (Keyboard). The Oxford boys play a selection of mainstream and their favourite emerging bands picked on the underground circuit. Probably the most disappointing act of the festival and the one that most people were probably excited for. Unfortunately the tunes didn’t really have the dancefloor moving and there wasn’t much energy from the Foals Duo.

British Sound Project offers a great indoor festival with a line-up geared up for an alternative rock audience. Also providing a platform for rising talent – picking out some of the upcoming bands from around the North West. Let’s see what the 2018 Festival has in store.

The Courteeners at Heaton Park Review 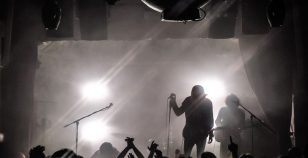 The Amazons at Deaf Institute: Review