After seeing Goldfrapp perform at Manchester International Festival a few weeks ago I was left in awe. The duo released their long-awaited sixth studio album this summer and MIF offered a rare opportunity for fans to hear the new album live for the very first time.

The never to be repeated performances were accompanied by the Royal Northern College of Music’s string orchestra over two nights at Manchester’s Albert Hall and for me was one of the highlights of MIF this year.

So it’s only fitting we follow it up with an interview.

Is Tales Of Us a “city album”, where do you think the characters from the songs live?
Alison Goldfrapp: ‘Jo’ is definitely set in a city, so is ‘Stranger’. But a lot of them are set in nature. So there’s a mixture. Often my dreams are set in nighttime, so that inspired some of the songs and particularly the visuals for the album. Tales Of Us is more about a feeling, than a place. What you cannot see is quite important.

What do you mean by what you “cannot see”?
Alison Goldfrapp: When you look at space and emptiness, your imagination fills in the blanks. This album is more minimal than previous albums we’ve done. I like the intimacy and the suspense you can create with just the voice, guitar, and strings.

Although the album is minimal, the sound is rich and there’s a lot of instrumentation. How did you achieve that?
Alison Goldfrapp: When you simplify the sonic landscape, it’s like holding a magnifying glass up to those sounds. You become very selective about the sound you want the instruments to make, what you want to say with them – their narrative and colour.

There’s a lot of string sounds on Tales Of Us, what do you like about them?
Alison Goldfrapp: Strings can give such drama and expansiveness. Also, Will and I are big romantics, we love their bittersweet melancholia.

Let´s talk about the first short film from the album, “Jo”. In it, you are walking through a modernist house and it looks like a classic setting of a crime thriller. Is architecture a stylistic device?
Alison Goldfrapp: Yes, architecture can be a stylistic device. The house in which ‘Jo’ was set was deliberately chosen for its clean lines and graphic style. We filmed it at night because we wanted to evoke a sense of dread. Whereas ‘Drew’ is about past relationships and nostalgia, which is why we chose a deserted English mansion to conjure the idea of romance and memory.

You have said in an early interview that making videos is the worst thing that you can think of. What has changed since then?
Alison Goldfrapp: What’s changed is that I’ve been much more creatively involved this time. The fact that we didn’t have a big budget for this project has meant that everyone involved in making these films has been doing it because they really wanted to. We all felt passionate about the ideas and working with Lisa, and that made us a great team. We also had a lot of fun. It was the first time I’ve worked with my partner Lisa Gunning, who directed the films. Working with her has been an incredible experience. We’ve both loved the opportunity to collaborate artistically.

Two songs on the album were inspired by the books of Kathleen Winter and Patricia Highsmith, both known for their antiheroes. Are your protagonists also antiheroes?
Alison Goldfrapp: I guess so. The characters in the songs are alienated, they’re trying to understand their place in the world.

Did these two writers also influence your writing skills?
Alison Goldfrapp: I wish! It’s more about being inspired by the atmosphere and the people in these stories – some are true, and some are fictional.

Names often have a long history and tradition. Did you think about that while giving the songs the names?
Alison Goldfrapp: Some of the names are taken from the stories the songs were inspired by. I chose others because I felt they represented something about the person or the setting. ‘Alvar’, for instance, is a Finnish name. I’ve always been fascinated by fairy tales and landscapes of Northern Europe.

You recently tweeted a quotation by J.C. Pearce: “To live a creative life we must lose our fear of being wrong”. How does that connect to the album?
Alison Goldfrapp: It doesn’t connect specifically to Tales Of Us, but I think it’s relevant to any creative process. Part of the creative process is discovery. For example improvising and jamming is such an important part of song writing for Will and I, for which you have to surrender your inhibitions, and that’s when magic can happen. What I love about this quote is that it summed up this feeling for me. Quotes can be great reminders.

You often change your musical style on your albums, do you feel you are reinventing yourself?
Alison Goldfrapp: I go with whatever feels right at that moment. I’m not interested in a formula.

Which character on the album do you like the most?
Alison Goldfrapp: I don’t have a favourite. I feel very close to them all – I’m very fond of them and care deeply about them as people. I think my relationship with them as songs will change the more I perform them live. They will take on a new life.

Goldfrapp’s ‘Tales Of Us’ will be available from 9 September on CD, vinyl, digital and a special limited edition boxset that will contain an exclusive disc of bonus material and a photographic hardback book compiled by Goldfrapp, further details to follow. 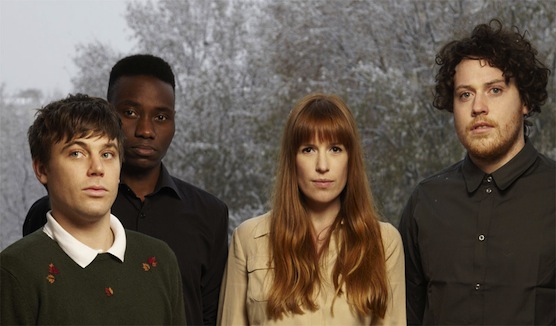