The Country Wife at the Royal Exchange

Find a review of The Country Wife that doesn’t include the word romp and i’ll eat my hat (disclaimer: I totally wont). Don’t get me wrong, this restoration comedy is certainly full of frolics, fun and feistiness (and the implication of plenty of other things that begin with F), but it has a lot more than just humour to make it as culturally relevant today as it ever was.

The Country Wife was one of only a few plays that made William Wycherley a respected wit about the court of Charles II (with whom he shared a mistress). The play was first performed in 1675; a time of relative creative and cultural freedom following the instability and turmoil of The English Civil War and the puritanical peace of The Commonwealth. In true libertine spirit Charles II allowed theatres to re-open and even women were allowed on stage to play…women!

It is highlighted in an interesting essay by Viv Gardner in the production programme that the play enjoyed a revival in both the 1920s and 1960s; two more post war periods.  Maybe this is why The Country Wife is again of interest now, when the purpose of Satire – the laughs it provides alongside the ridicule of authority – is truly appreciated. Despite its time-specific success, reflecting our ebb and flow with censorship, the play was then considered distasteful and so went unperformed between the mid-seventeen hundreds till its revival in the 1920s.

Maybe this is why The Country Wife is again of interest now, when the purpose of Satire – the laughs it provides alongside the ridicule of authority – is truly appreciated.

Watching it afresh at the Royal Exchange Manchester, in 2012, there is certainly no disguising The Country Wife’s sensuousness. It is in how we allow these senses to direct our cultural and moral codes that fortunately, and unfortunately, maintain the play’s relevance. The opening scene immediately takes you straight into the play’s licentious nature as we see Horner (played bad-boyishly by Felix Scott), one of the main characters, being groinally inspected by his boiley and bawdy doctor. Horner conspires with his doctor to spread the lie that he is indeed impotent, so that London’s men-folk might relax while he is around their wives, and the wives themselves might relax while their ‘honour’ remains, at least publically, in tact.

What quickly unfolds is an interconnected line of lust that pretty much links every single character in the play. As a precursor to the fantastically descriptive character naming of Dickens and later Dahl, Whycherley’s characters are perfectly summed up by their titles. The anti-hero Horner literally has the horn for anything that moves; indeed it is men like him that provoke such primal fear in men like Mr Pinchwife. Insecure Pinchwife has pinched himself a country wife – the simple natured Margery – “because she’s ugly, she’s more likely to become my own”. Then there is Mr Sparkish, who, like a bolt of lightning, flicks his ‘wit’ about stage in a manner and a wig that could out-dandy the best of them. And not forgetting Lady Fidget, whose name depicts her sexual frustration.

The anti-hero Horner literally has the horn for anything that moves; indeed it is men like him that provoke such primal fear in men like Mr Pinchwife

Horner’s deceit results in successfully bringing every woman he wishes writhing to his bedroom door while Pinchwife’s plan – for a wife so innocent of the wants of London living that she less likely to stray – sends her duly into the arms of Horner. While Horner gets all he wants from women, under the premise that they keep his lie a secret, Pinchwife makes no secret of his desire to mentally and physically keep his wife under lock and key.

Amidst the Carry On-esque antics that include false-identities, cross dressing, sexual deceit and a doctor locked in a chest, runs two parallel love triangles. On the one hand there is Pinchwife, his country spouse and Horner. His wife being more innocent than Pinchwife had hoped sees nothing atall wrong with asking her husband to take her to a play because she likes ogle the actors, and strongly implores him to tell her all about Horner who fancies her. On the other hand there is Pinchwife’s sister Alithea, her betrothed Sparkish and Mr Harcourt who desires her. While Harcourt openly ‘makes love’ to Alithea, Sparkish bafoons his way through events believing it all to be a sign of friendship. His total lack of jealousy makes Alithea all the more needy of his attention.

Central of course to all of this tomfoolery is the country wife herself. Played buoyantly with full Welsh swagger by the brilliant Amy Morgan, Margery’s role holds a mirror to the society the play is ridiculing. Innocent as she is of the sexual politics that embroils the rest of the characters, she initially hides nothing from her husband, even when it involves her desire of other men (indeed she does nothing to disguise her sexual excitement). At the plays culminating scene when everything is revealed, it is she who humorously asks “What’s the matter with them all?” highlighting the ridiculousness of such double standards and the deceit it brings. It is also she who, as wife of a controlling and highly jealous husband, is literally locked indoors while he goes about his business, and who is faced with the threat of “i’ll write whore in your face with this pen knife” should she not do as she is told.

It is the country wife herself who humorously asks “What’s the matter with them all?” highlighting the ridiculousness of such double standards and the deceit it brings.

This mirror that she holds reflects issues such as sexist double standards and domestic violence which add depth and relevance to the play that, if it were absent, would leave nothing but a comedic romp. In a media month that has seen the vastly contrasting responses to the comparable issues of Prince Harry naked and the Duchess of Cambridge topless, it is clear that the gender issues exposed with full gay abandon in the sixteen hundreds, are as ripe and raw in 2012.

While this is the case, many will enjoy The Country Wife for its full on technicoloured rompery. It is fast-paced, raunchy and, under the directorship of Polly Findley, brilliantly performed. The costumes and set designed by Helen Goddard brilliantly reflect the yin yan of glamour and grime that surround the play. It is all cod-piece and heaving bosom, silk and satin, boils and blisters. This in tern reflects the duel-standards explored and the incongruous contrast between honour and all out sexual adventure. During one set change the music was identifiably Jimi Hendrix’s ‘Purple Haze’ played with full-on classical raunch. This is another stylistic and topical nod to the fact that this restoration comedy is still applicable. It is also, full-on risqué rock n’roll!

All images © Jonathan Keenan
Article by by Anne Louise kershaw. You can find me on Twitter here. 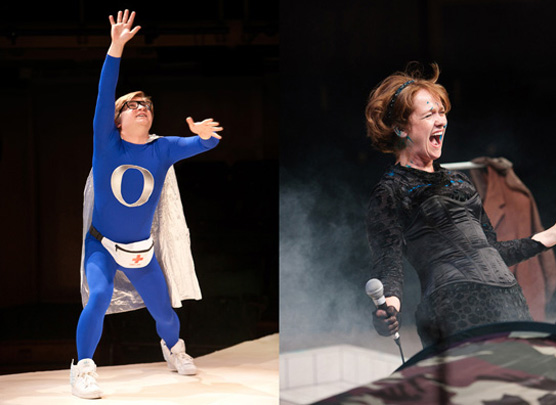