So you think you’re funny eh? You want to be a stand up, or you just fancy doing it for a laugh (see what I did there)?

Or if like me you suffer from a superiority complex of cripplingly low self esteem and a massive ego to counteract it… Well you’re probably already doing all you can to make people laugh at you, so why not do it in a professional setting.

Here is a list of what I think are Manchester’s finest comedy open mic nights;

Fab Cafe
Every Thursday, 8pm
Ran by the eponymously named Tuesday Tony (not his real name) every Thursday weeknight, ironically. You can be a well known comic, an in-between comic or just a starting out comic. Tony is a warm, friendly host but I’m warning you he’s a hugger.

Even if it’s your first night Tony will make you feel really welcome, it’s a well lit environment with a decent PA system. There are breaks in between, and depending on how many perform that night they have about five comics in each section that get about 5 minutes each (longer if there are less acts) before Tony flashes you… with his camera.

The punters are sometimes unaware it’s a comedy night, so don’t come out expecting a comedy crowd, but if you’re funny you’re funny right?

The Old Pint Pot Open Mic
Every Tuesday
The Open Mic night in this boozer in Salford generally have musicians playing. However, they are also open to anyone who wants to come down and tell some jokes.

Josh, the guy who runs it, asks that you can contact the group on Facebook first for a spot, and the chances are that you’ll get one – he’s a lovely host too.

The Worst Comedy Night in Salford @ The King’s Arms
Every fortnight on a Tuesday, 8pm
Actually this gem is one of the best comedy nights I’ve been to, you can decide afterwards whether or not the name of the night is cleverly ironic or a truthful statement.

It’s really a relaxed environment, with each comic doing 5 or 10 minutes, there’s no timer or pressure. The room is absolutely tiny they honestly don’t need a microphone, you could whisper and people would hear you. The fact there is a microphone only seems to emphasize how crazy the comedy can get on these nights.

A great night if you’re really nervous or just starting out.

Comedy Balloon @ The Ape and Apple
Every Wednesday, 8.30pm
This is another great comedy night and is well organised by the host, Jason Cooke. It’s generally broken down into a first act of comedians performing around ten minutes of material, then a drink break, then new or newish comedians doing either five or ten minute bits and then after another drink break (I’m drunk at this point) there’s more of a headline act.

Now you can turn up and maybe get a spot but it’s advisable to book by emailing jason@comedyballoon.co.uk with your preference of a time, but it it’s not guaranteed.

The venue is brilliant. It’s upstairs and people can’t just walk in and out and they come specifically for the comedy. You get a proper stage with great sound and lighting. It’s seriously a proper set up.

Trof NQ
1st and 3rd Wednesday of the Month, 9pm

Again another Open Mic night that allows comedians to perform as well as musicians. The host is a bit more hands off, he announces you from behind his sound desk so you may need to flirt with the audience a little to warm them up a bit first before you get into your routine.

Performers do get FREE beers though, so it might make your nerves improve before stepping up on stage and bombing.

Of course there are others to mention, but I found these to be the best ones if you want to just walk in and perform your stuff. Now you may or may not see me there one night, and I may or not be going down like a lead balloon…

Discount Comedy Checkout at The Frog and Bucket 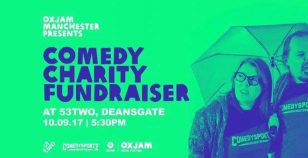