24 hours in Manchester with Zeph

Handled by the same Manchester-based music company and talent management agency that manage Aitch (NQ Records), we take a look at a typical day for Zeph. 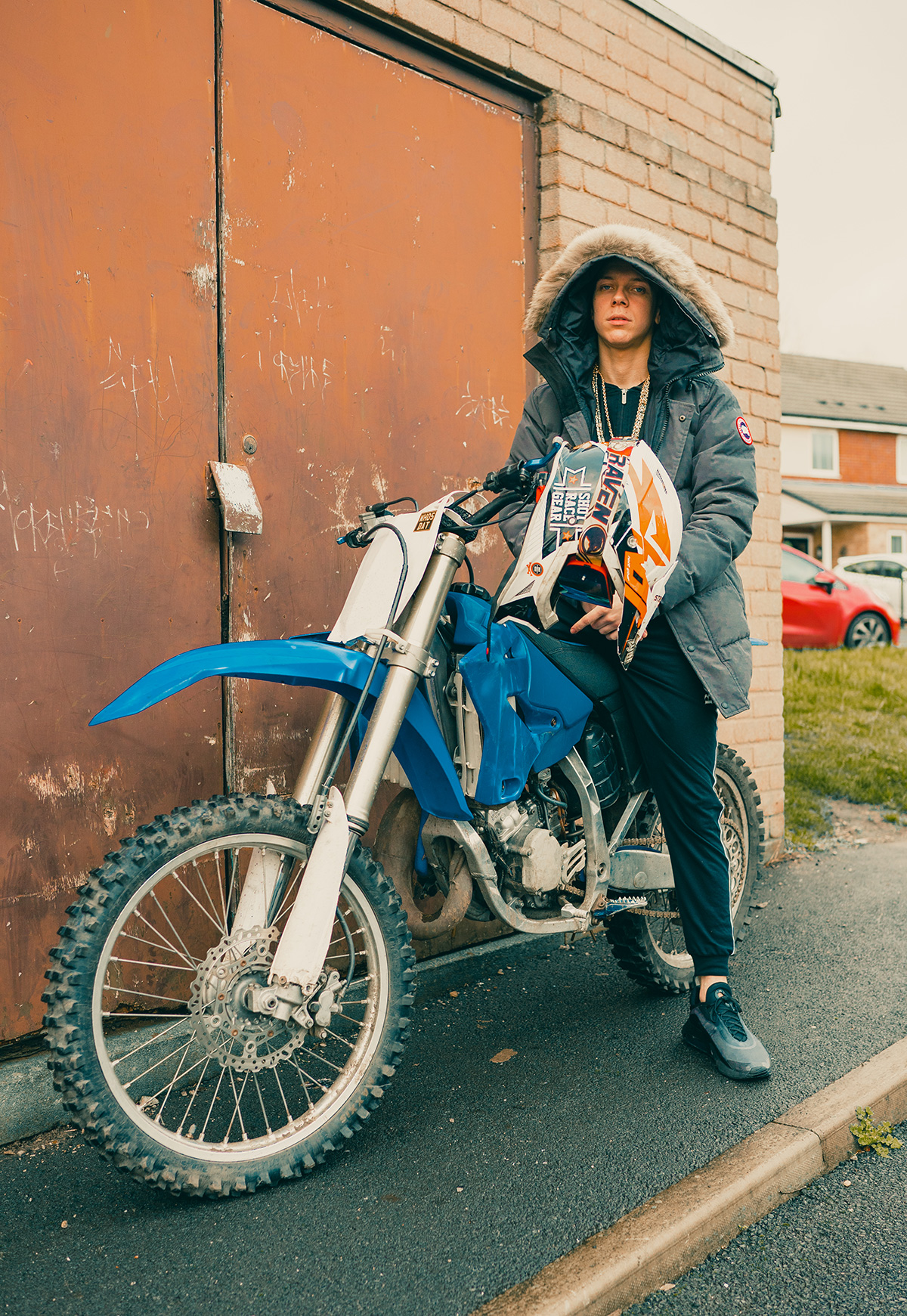 An ambitious 20-year-old rapper from Manchester, whose livelihood revolves around two main things – music and his community. Here’s his latest 24 hours…

Pre-12pm: Waking up and getting my day started

It’s always sick when you read that people are so dedicated to their craft that they wake up at the crack of dawn and then keep going on until the following day! For musicians, it’s never that simple though.

Some days I’m an early riser, other days I finish studio proper late and have to get my sleep in at all sorts of different times. 11pm, 2am, sometimes as late 4am, it just depends really. I don’t think what time you get up or to bed determines your success to be honest, it’s more about how productive you are in those hours that matter.

So, when I get up, I get ready and today, I’m wearing a Fendi skully hat, Hugo Boss tracksuit, Gucci man bag and couple chains, you’re as good as you feel – know what I mean?

I might eat at home or go to my cafe. Could be a butty of some kind, or something small like crisps if I’m not hungry then straight to the studio or gym.

Morning is when I can think best as well so it’s usually when I go over ideas. EPs, music videos, all that type of stuff. A couple days during the week I’ll go and see management at the developing NQ House, or i’ll meet them somewhere local, if not on the phone or through text. If I’m having a quiet morning I can always rely on them to keep me busy. 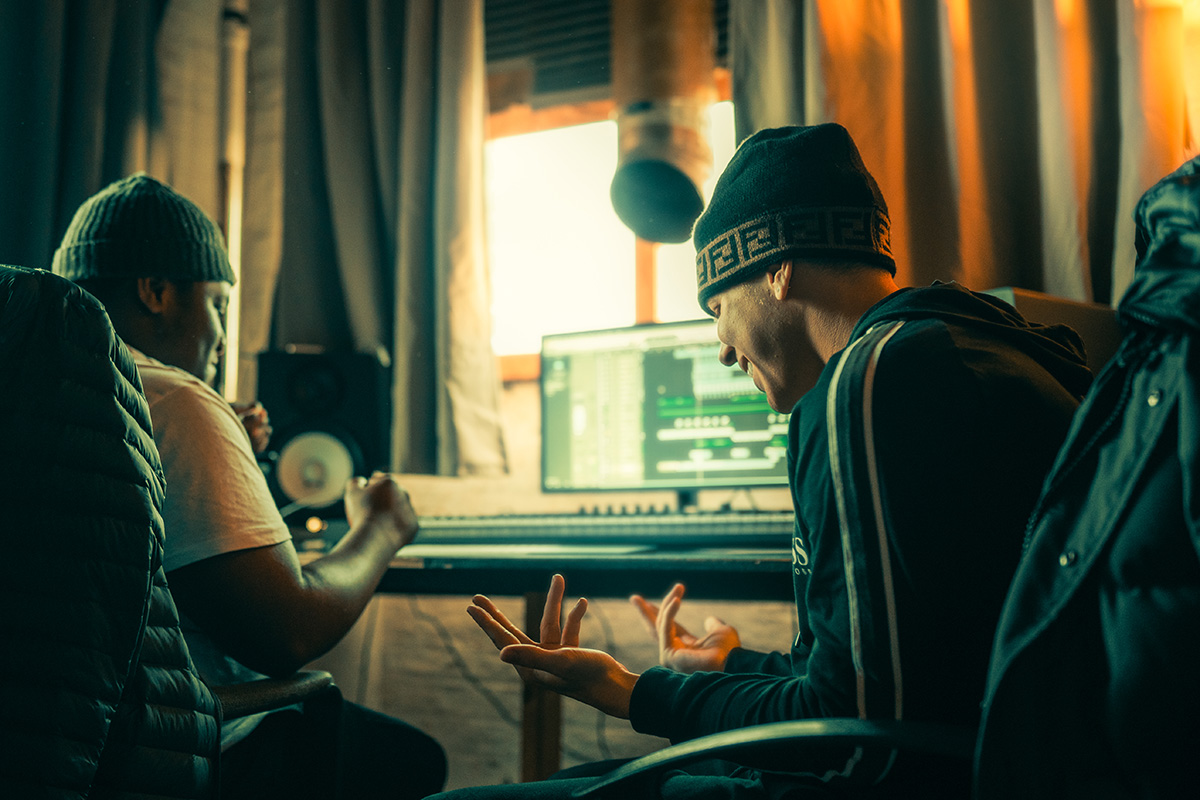 Midday is a weird time for different people. Some are sleeping, some people are eating lunch after being at work from 7/8/9am, and some people like me – are preparing to make music. I’d probably get to the studio about 11/12 and crack on from there.

“We’re making a banger today” – was probably said a couple times by this point just to get it in my head of what I’m trying to achieve. That’s how I think when I want to get the energy in the room up with my producer, or whoever I’m in a session with that day. A quiet studio is good but vibes are good too when my friends who also make music are here with me. 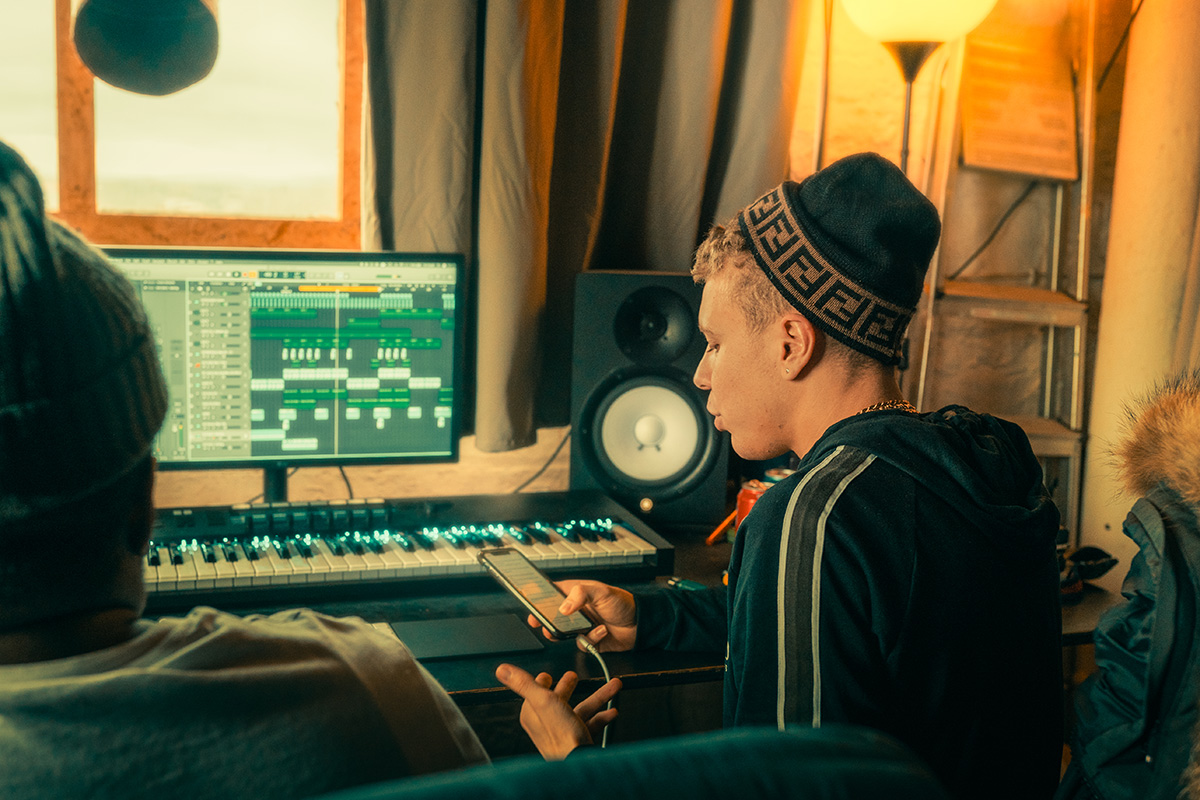 Usually pretty deep into writing by this point, noting an idea or two down if not a verse and chorus. People say music always takes long, but sometimes the process is quick, depends on a couple things. Mood can affect it, what’s going on in my life, who’s in the room, if anyone – a few factors.

I don’t really use a pen or pad to write, I just figure it out. Put a beat on and my brain will start free flowing. Never really needed to use that method as lyrics always just come to mind. Don’t have to be great as it’s only a draft but I try to figure it out before I even step into the booth, so it only means a take or two to get my idea down.

Sometimes after that we’ll delete stuff and go again (which I’m used to doing now) in order to get the best verse out, but usually it’s cool and I can move on.

By this point, I’ve done a verse and a chorus. Experimenting with different flows, patterns and schemes to add in the tune or planning a second verse. Might have a chat with who’s in the room for early opinions and also management will let me know what they’re feeling. Some artists can’t take people weighing in on how they make music but I never find that’s the case, other people will listen to it at the end of the day.

It can be tedious sometimes, the whole process of making music. It isn’t always money and girls like people think. When you’re recording, loads of things go through your head. I try to clear my mind and just do what I know best though, sometimes I might try something new.

One thing that you have to get used to is listening to that track loop over and over until you figure out what you want to do or say on the track.

2:00pm: A welcomed break for inspiration

Late afternoon and a couple hours in, if I can’t finish the tune then I’ll usually go find inspiration or just chill for a bit. Might even go and listen to some of my other tunes, or work on some other ideas I’ve got there. I don’t stop for that long, just a quick moment and then straight back to it.

On this day a couple people came through like a photographer, blogger and a producer/artist named Pezmo – who produced Aitch’s viral freestyle. We’ve got a collaboration out now and just shot a music video. My managers Bilal and Laz come through often as well to check in on me and how the music’s soundings.

“It’s hot in here init” – a different energy is in the room instantly like I was talking about before. Artists always have that person who has banter and/or strong opinions on music. Sometimes it’s a distraction, sometimes it helps the creative process. In this case, it’s never the first one as when the recording starts everyones quiet and respectful, that’s the main thing.

Whilst everyone else in the room talks, I just keep to myself and get back to work. Sometimes joining in on any conversations that grab by attention, but most of the time I’m time focusing on what I’m gonna do in the next couple hours.

After getting inspiration and testing out some different vibes, I’ll either revisit the track to finish it or start a new idea. This time round I wanted to finish it as it was actually banger.

So, I step in the booth and get to work. Producer presses record and like I said, I try to box off my takes quickly. This time I did it in two takes. If I like what I’m hearing, I might even go in and do a third verse.

I’ll be getting ready to leave soon as I’m getting hungry. Them ones where you’re working and forget to eat, probably happens to everybody but definitely musicians. Hard to keep a good diet when you’re in the studio, snacks and takeaways are too tempting.

Lucky for me, I own a cafe!

Always gotta thank the producer for their hard work, an underrated part of music definitely. Had a listen back to my new song, which we nicknamed ‘Pasta’ and now we’re watching my new video with Pezmo before we get off.

A London-based director named J Dot filmed this one and it’s the main topic of conversation, very cold. With everyone bopping heads and visibly enjoying the video, I make sure I’ve got everything I came with.

Listening to new music or music by other artists is quite a common thing as well, especially towards the end of the session. It’s like a warm down at the end of a workout, not always necessary but… needed sometimes.

Listening to the ‘Pasta’ song once more, then we head out.

I’ve got to drop off some merchandise later to some fans, so off to the NQ House to collect the stuff first. Only one drop off today, but sometimes I can have two or three. The NQ House is currently being renovated, but will become a creative space and hub in Manchester for the budding young company. 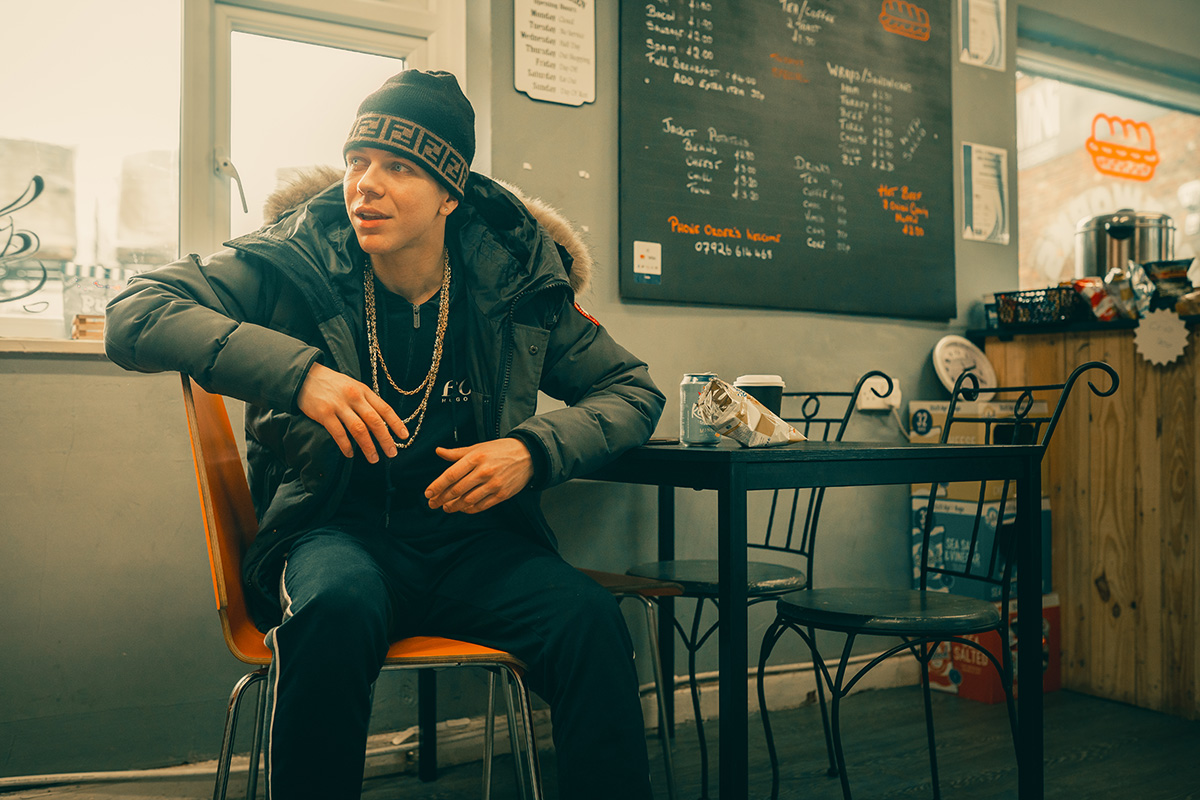 Make my way to my cafe (Ironworks) which is in Ashton, everyone’s welcome, but usually its local workmen that come and get their lunch or a coffee. After taking some pics, I sat down with some cheese and onion crisps, a strong coffee and a Rubicon Mango for the road.

It’s closed to the public at the moment due to COVID but will reopen soon. ‘Umbrella’ by Rihanna is playing in the background as I’m writing this, whilst eating and talking to my managers and everyone accompanying us for the day.

I feel like maybe because I’m young and I wear chains and that, people may get the wrong impression of me but I care about investing in myself and my local community. Hopefully I’ll do more soon.

Just before I leave, phone call time. It’s time to catch up with any missed calls and texts that might be important. Photographer is snapping away getting candid photos, while I check on family and friends and double check with the supporters getting merchandise the timing for drop off is ok.

My listeners and supporters mean a lot to me and always will. I know they’re the reason I’m here today and the reason why I’ll do even better eventually.

All is well though, so time to set off. 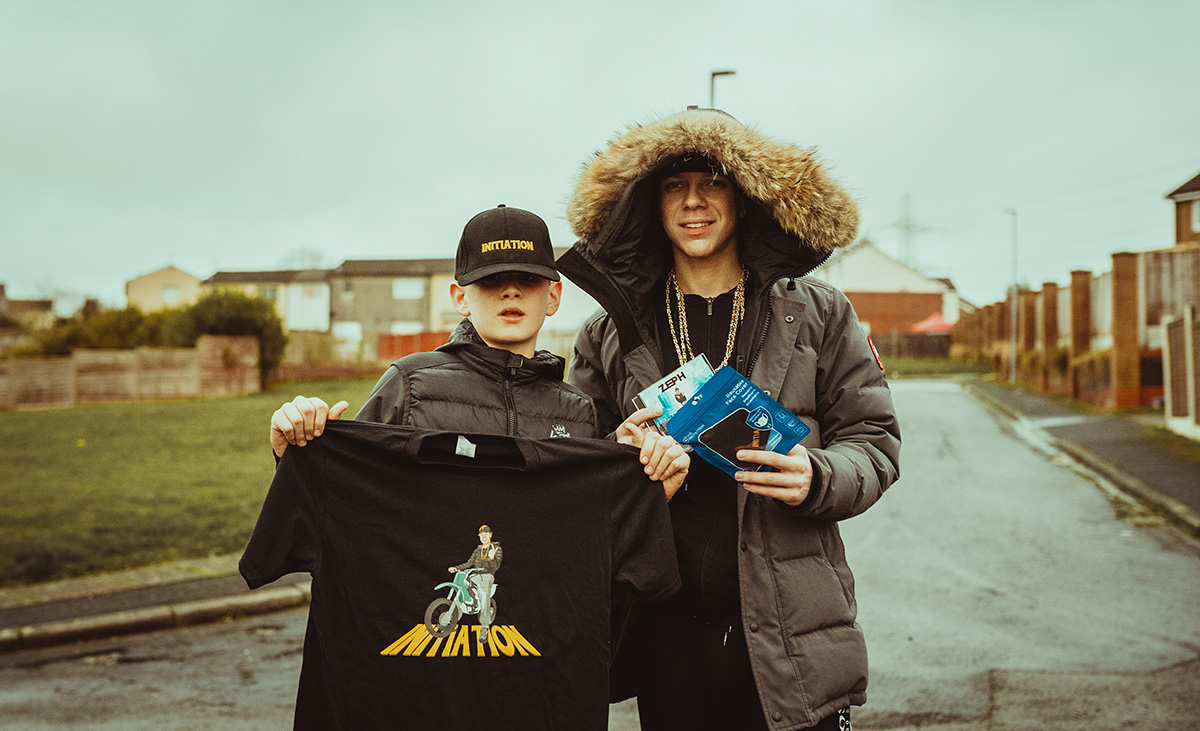 We’re about to drop off merch to a supporter of mine. I can’t always do it in person if I’m working, but any time I can, I’ll do it. I want my supporters to know they’re appreciated.

This one was a bit of a journey, but that part isn’t the most important thing for me. Meeting the fan, getting some free merch on this occasion and just getting an experience no one else will be getting will make him know I’m genuine and not just any rapper.

The kid seems young, probably early teens. Seems happy with his new gifts, so we take a few pics for him and for me after talking for about 20 minutes. 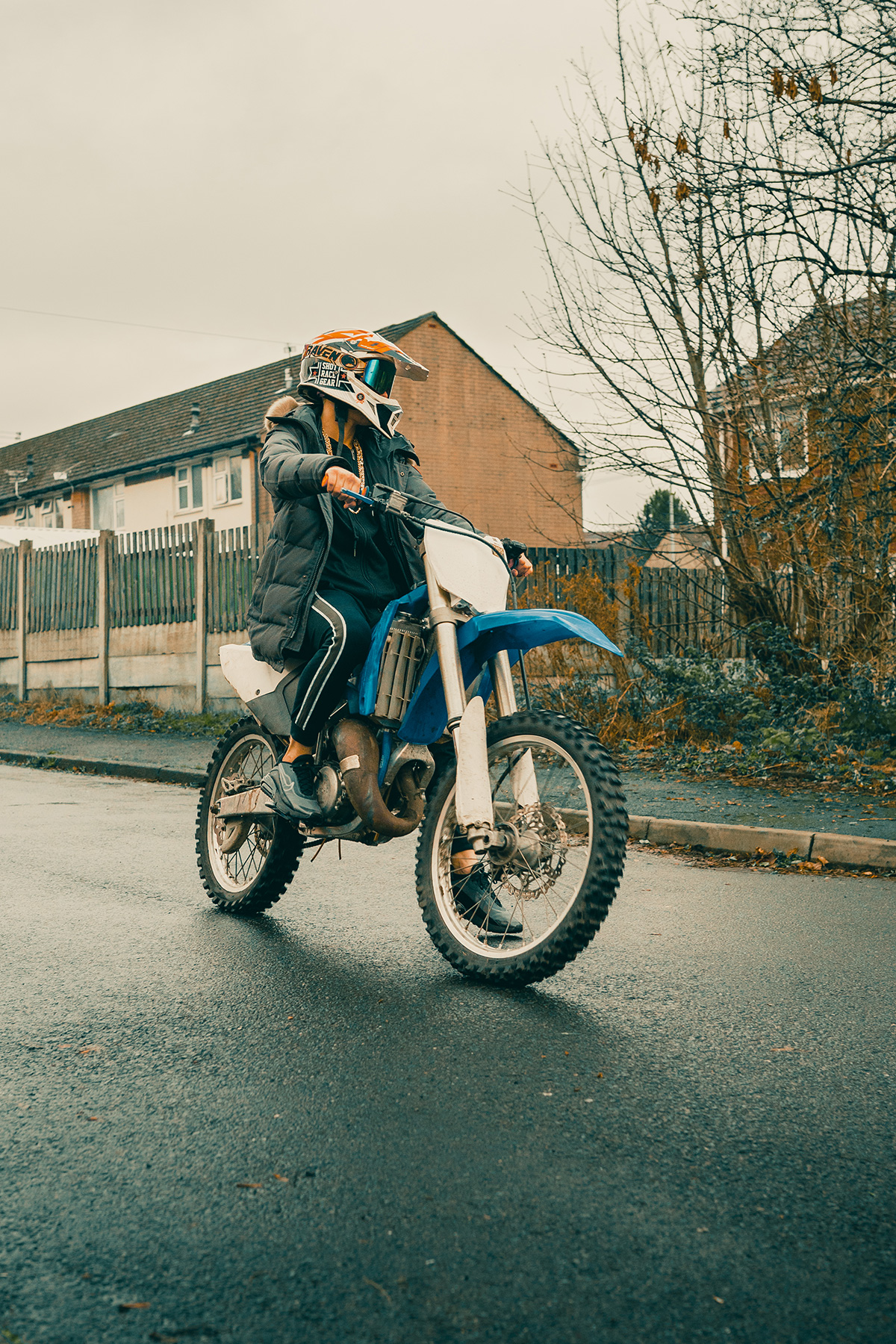 6pm: Downtime on my bike

About this time I’ll head home. Not always at 6 on the dot, sometimes nowhere near 6, but I try to treat my lifestyle like a job in a way and have a routine. Get the work done early, then go home, sometimes chill with my people, base up. Usually go to mums and do whatever I feel at the time, just making shit happen.

My main hobby outside of making music is motorbikes and bike culture. I spend my downtime on that! My fans will know this already maybe as in ‘Safe G’ and ‘Pull Up’ there’s bikes in them vids. I just think the culture of it is sick and today I managed to get some decent live action shots on the bike. I don’t spend long riding it, just enough to get my fill and then go back in.

I’ve got a blue Yamaha YZ125, hoping to get a collection going at some point.

From here on out anything goes really, like I said I might chill with friends or might just be home. Could go sleep really late from this point or get a decent nights sleep.

That’s the best thing about the lifestyle as a music artist, the freedom it gives you to do what you want with your day, when you want.