A BYOB Party Bike, the Opening of Maray & The Best Things to do in Manchester this Week

Also including a butchery demonstration, a tour of Stockport’s Old Town and Bright Light Bright Light at YES. 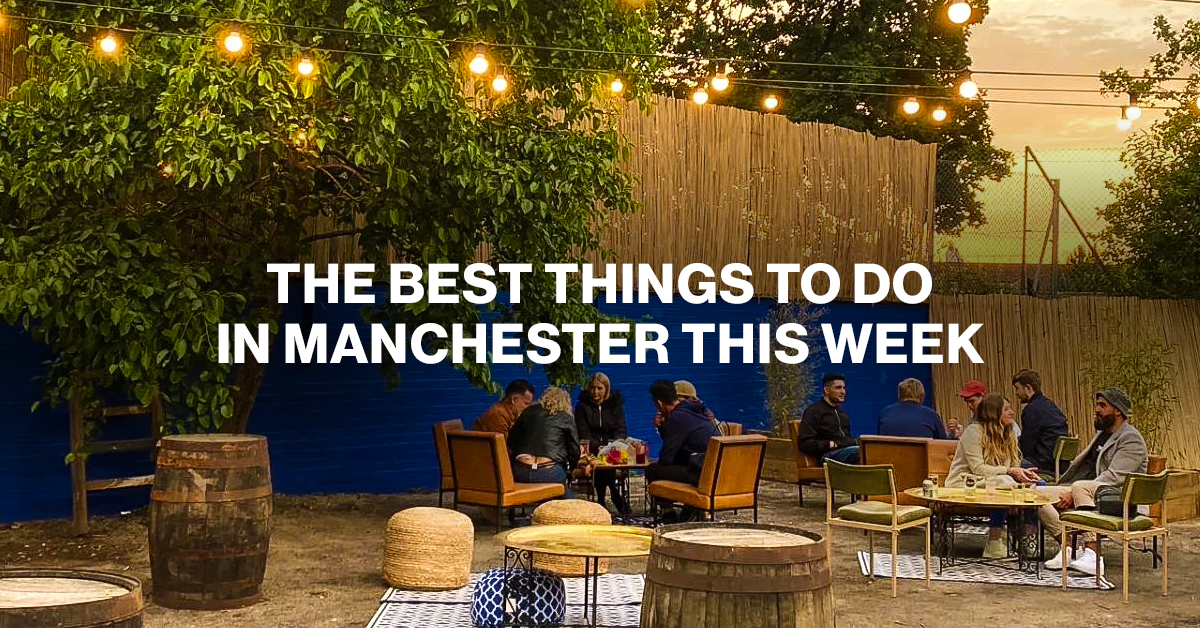 As temperatures continue to soar across the UK this week, there’s not much that springs to mind other than PUB. However, there’s more to life than clutching an ice cold pint of lager in your favourite sun soaked beer garden (she says) and there’s a tonne of mint events to get yourself along to this week.

The incredible Japanese artist, Yoshimi Miura is hosting another exhibition of her work in Northern Quarter, there’s another art showcase focused on women’s football at the National Football Museum and a BYOB party bike has also landed in the city centre! The wonderful gwafuvegan is also throwing a 100% plant-based supper club at Feel Good Club, which will feature delicious West African flavours and cooking demonstrations.

Throughout the Summer
Another exhibition available to view this week has been curated by This Fan Girl, the online media platform and community which was set up as a response to the way female fans of football were portrayed in the media. Almost always represented through articles naming the ‘50 sexiest football fans’ or words to that effect – the new exhibition at the National Football Museum celebrates just how far we’ve come from that one-sided representation. Featuring work created by This Fan Girl, the exhibition hosts visuals from other women and non-binary artists who have been integral in changing the narrative.

Tuesday 12th July
Not one to miss this week, House of Spice is taking over HOME to present film, Fire, which is one of the first mainstream Bollywood features to explicitly depict homosexual relations in a culture which adamantly denied such a love could ever exist. After the screening, the collective will host a post-show discussion and live performances celebrating all that is South Asian and queer in Manchester.

Every weekend throughout Summer
A BYOB Party Bike has landed in Manchester and it’s ready for you to book this weekend! The mobile pub, which has you working hard for your booze, picks you up at 1pm in Stephenson Square and takes you on a route around the city centre complete with a roaring sound system and party lights. It costs £10 per person and hosts 8 people at one time, the perfect plan for a summer’s day or birthday celebration!

Leaders in the rum game, Bacardí are hosting a one-off evening of rum-based beverages this Wednesday across four different venues in Manchester. Ramona, Liars Club, Ducie Street Warehouse and Escape to Freight Island are all taking part in the Rum tour that will see guests consume a different rum-based cocktail at each venue. With National Piña Colada Day, National Mojito Day and National Daiquiri Day only a few days apart this year, the Bacardí rum month is a whole month dedicated to rum cocktails. And what better way to spend it than running around the city drowning yourself in the holy grail Jamaican spirit?!

Tickets are £20 per person and include your 4 Bacardí cocktails, plus your very own taxi that will take you door to door to each bar on the tour.

Wednesday 13th July
This Wednesday, the incredible gwafuvegan is hosting another West-African, 100% plant-based supper club this time at Feel Good Club’s warm and welcoming Northern Quarter space. Using low waste and fresh and seasonal produce only, the event will be an intimate affair in which head chef, Ngwafu will cook a delicious African and Cameroonian three-course meal to feed your soul! Every single thing on the menu is 100% vegan and you’ll learn about Gwafuvegan’s food, culture and ingredients throughout the evening, too.

Thursday 14th July
The total opposite to a vegan feast, but we’re all about balance here at Finest, Farm & Fish is hosting a Butchery Demonstration evening this Thursday from 6.30pm – 8pm. You will join farmer John as he guides you through the butchering of a whole lamb, discussing different cuts and how best to prepare each one. Alongside the butchering, there’ll also be a chance to sample lesser-known cuts that will be served alongside some paired wines.

Lord of the Dance

Thursday 14th July
Celebrating 25 years this year, Lord of The Dance is the most successful touring show in entertainment history. The show starts a 4-day string of dates in Manchester this Thursday and promises to be a revived and updated version of the original play, featuring over 150,000 taps per performance as it transports audiences to a mythical time and place.

Lord of the Dance Tickets

Friday 15th July
This Friday, the very wonderful Yoshimi Miura is presenting the second part of her High On Likes exhibition at Hilton House. The Japan-born now Manchester-based artist is hugely influenced by pop-art from the past and the humour of Northern Britain – with her work often incorporating well-known comedic legends including Alan Partridge, Cilla Black and Jimmy Krankie. Miura will also be there in person selling prints and t-shirts for you to take home!

Register for High On Likes

Friday 15th July
Grey Lantern will take over the coveted Low Four Studios this Friday with a huge line-up of genre-bending acts in collaboration with STEAM Radio. Headlined by experimental rap/spoken word duo, GOMID, the intimate show will also see breakthrough electronic hip-hop star SIBZ and DJs Niix and One6Wave bring nothing but good vibes from 8pm – midnight at this one-off show in one of Manchester’s greatest music venues.

Friday 15th July
Currently one of the most celebrated stars in British comedy, Tez Ilyas achieved huge success after launching his debut stand-up show TEZ Talks. Now, after a lengthy and highly note-worthy career that has seen him appear on the likes of Live At The Apollo, Mock The Week and Man Like Mobeen, alongside launching his own book ‘The Secret Diary of a British Muslim Ages 13 ¾’ he’s now back with another hilarious and intimate show at The Lowry this Friday. The performance will also be followed by a Q&A and book signing.

Saturday 16th July
This Saturday also finally sees Maray land in Manchester! Founded in 2014 by James Bates, Tom White and Dom Jones, Maray currently has three sites in Liverpool. The soon-to-be-open Manchester site will be the fourth, the largest, and the first one outside its hometown. The concept was originally inspired by the owners’ experiences in the Le Marais district of Paris – a vibrant arrondissement famed as a culinary melting pot of Middle Eastern flavours and stand-out cocktail bars. You’ll soon be able to get your hands on that Disco Cauliflower when they open their new site at Bruntwood Works’ Union building on Brazennose Street, right next to ‘The Hidden Gem’ church and a stone’s throw from Albert Square and Deansgate.

Book a Table at Maray

Saturday 16th July
A celebration of one of Manchester’s music scene’s biggest supporters, John Hall, is taking place across the Rose & Monkey and Band On The Wall this weekend. Last year, John sadly passed away and before his passing, he had the vision to set up a foundation which provides free-to-use, clean and safe rehearsal space for young musicians just starting out. This will be a fully equipped space, meaning musicians will just have to bring themselves along and focus on making music.

His friends and family are very close to this now becoming a reality but will need to continue to keep raising funds to ensure that this can be a long-term fixture. The party on Saturday aims to ‘do him proud’ and raise even more money to make his dream a reality. There’ll be an incredible line-up of local music all day, as well as food from This Charming Naan.

Saturday 16th July
Delve into the historic underbanks of Stockport’s Old Town with a gripping walking tour hosted by Stockport Heritage Trust on Saturday. The tour will start off at the White Lion on Little Underbank and will end at Stockport Dungeon at the top of Mealhouse Brow, along the way you’ll be exposed to the secrets of the town’s past, its buildings and former residents! Tickets are £6 and all proceeds go to Stockport Heritage Trust.

Sunday 17th July
Motion Ward music label from LA invade White Hotel for a night of alternative partying this Friday with America’s ambient artists ulla & Pontiac Streator, JS, and Ben Bondy. Accompanied by Ultrafog spreading his haze from Japan, it is bound to be a night of 100% organic live sets, DJs and personal appearances.

Sunday 17th July
As the weather is set to reach 30º this weekend (far too bloody hot if you ask me), Soulford Sunday at Adelphi Lads Club is undoubtedly the place to be. Hosted by DJ collective Queer Latifah, it’s all about sippings cocktails in the sunshine and chowing down on tasty food with a soundtrack of chilled music. Sign up for your free ticket below!