Bluedot Festival, Tatton Park's Flower Show & The Best Things to do in Manchester this Week

Also includes 50% off at Go Falafel, the opening of Dokes pizzeria in Prestwich, the Manchester Craft Beer Festival and more... 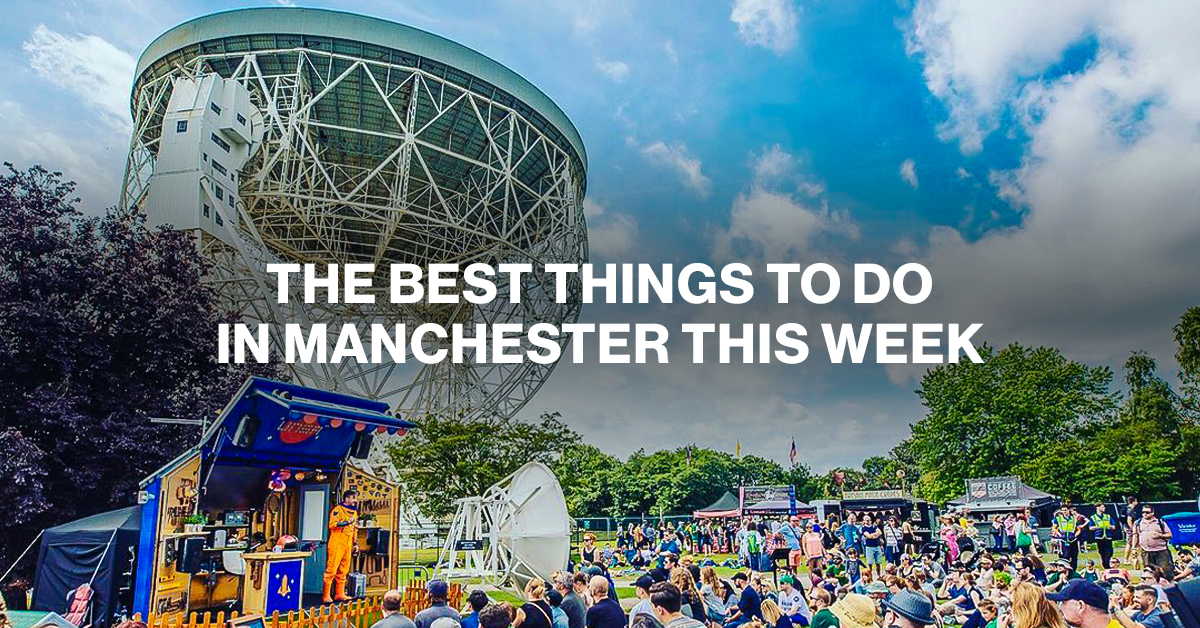 You’re probably reading this whilst sweating profusely – what with this massive heatwave we’re having at the moment. But to be fair, it’s less a ‘wave’ and more of a splashing – lasting only Monday and Tuesday of this week before returning to a more manageable 20 degrees or so.

As a result, there’s not much going on at the beginning of the week – but as we get to Thursday we see a couple of massive events kick off, including the Flower Show in Tatton Park, the Manchester Craft Beer Festival and the long-awaited return of bluedot to Jodrell Bank! Until then though we’ve got a couple of exciting new openings, plus the 10th birthday of Go Falafel – where they’ll be offering up 50% off their entire menu on Tuesday. That’s lunch in Piccadilly Gardens in the sun sorted then.

Monday 18th – Saturday 23rd July
It’s all guns, planes, kissing and show-stopping dance routines down at the Opera House this week as Rodgers & Hammerstein’s classic ‘South Pacific’ takes to the stage. Features a full orchestra, this production boasts one of musical theatre’s most memorable scores, a much-loved traipse through Tony and Pulitzer Prize-winning belters including Some Enchanted Evening, I’m Gonna Wash That Man Right Outa My Hair and Bali Ha’i.

Tuesday 19th July
Foodwell is set to open up in a new spot right in the heart of Spinningfields this week, on the ground floor of the XYZ Building with a new deli-bar concept focusing on high-quality food using locally sourced produce. There are freshly made deli sandwiches, wood-fired meats, protein boxes, smoothies and juices, and a hot breakfast menu. They’ve also got doughnuts and cookies from GooeyCo. A huge pizza oven takes centre stage, where they’ll be serving crispy Detroit-style pizza by the slice. In the evenings the focus will be on cheese and charcuterie boards, and they’ll be serving wine by the glass to accompany them, making it a great spot for hanging out after work.

Tuesday 19th July
To celebrate an impressive 10 years in the city centre, Go Falafel is offering 50% off all items all day long at every single one of its branches all day this Tuesday. As well as this, the first 10 people that head to the Northern Quarter site and quote ‘Manchester’s Finest’ will receive their order completely FREE. All of Go Falafel’s salads, dips, side dishes and falafels are made fresh, in-house every day, meaning their falafel wraps are unbelievably tasty, capturing the unique flavours and nutritional value of Middle Eastern food by creating something simple, flavoursome and light.

Wednesday 20th July
Finally! Dokes Anglo-Saxon pizza in Prestwich is opening this week – and you’re in for an absolute treat. Opening their doors on Wednesday, the team from Elnecot have done a splendid job on the space, creating a fantastic community space on Bury New Road. The British produce really takes centre stage on the menu, with Chef-Patron Michael Clay sourcing the very best producers over the last 5 years at Elnecot, resulting in cheeses from every corner of the country, salamis and nduja from Brighton; creamy British burrata from the home counties and exquisite truffles from Wiltshire.⁠

Thursday 21st – Sunday 23rd July
Bluedot is back! Or, more accurately, bluedot is back. The festival with the little ‘b’ returns to Jodrell Bank after a few years away due to COVID and we couldn’t be more excited. Alongside Bjork as a headliner, the festival will feature a massive roster of music performers, comedians and scientists – including Stweart Lee, Adam Buxton, British historian and filmmaker David Olusoga, leading space scientist Monica Grady, and astrophysicist and host of BBC’s The Sky at Night Chris Lintott.

Under One Roof Summer Party @ YES

Thursday 21st July
An accessible rave for adults with disabilities, their friends and family. Under One Roof is back for 2022 down in the basement of YES, opening up the dance floor to those adults with learning and physical disabilities who feel otherwise unable to attend clubbing events in Manchester, creating a safe and welcoming environment. The talented THE FAT BRITNEY will be behind the decks, someone who has not let their own disabilities stand in the way of DJing.

Thursday 21st – Sunday 24th July
The world-famous RHS Flower Show returns to Tatton Park from Thursday, with a weekend celebrating colour, creativity, community and “the positive power of plants and flowers”. Highlights from the weekend include planet-friendly gardening inspiration where you can spruce up your tiny city spaces, help with growing your own produce and explore an immersive ‘Floral Forest’ created by a group of talented florists. Tickets are available below and start from £34.85.

Thursday 21st July
A comedy night for ‘hot people’ – which is all of us at the moment with this heatwave innit!? Innit?! So, we’re all invited to The Fitzgerald this Thursday for a stand-up extravaganza with multiple award-winning Canadian Allyson June Smith, a self-confessed “over-sharer” who’ll serve up a potent observational cocktail of wit, bite and shame. The show operates on a ‘Pay What You Can’ scheme, giving everyone a chance to see it by paying what you can afford.

Thursday 21st – Saturday 30th July
Taking place in and around Sale, the award-winning Refract Festival returns this year with a carefully curated programme of the very best in live comedy, music, dance, experimental performance and theatre. This includes ‘Lifted’, breathtaking and highly skilled acrobatic theatre, ‘Fashion Spies’ a choose-your-own-adventure comedy and ‘A Celebration of Father Ted’ with comedian Joe Rooney. There’s loads on – and you can check out the listings below…

Friday 22nd & Saturday 23rd July
After a huge sell-out festival last year, the Manchester Craft Beer Festival is back at Depot Mayfield once again this weekend with a monumental line-up of beer, food, music and more. One of the very best things about this festival is that your ticket includes ALL of your beer when you’re in there – so you can try as many of the hundreds of beers from the likes of local brewers such as Blackjack, Marble, Track, and Pomona Island. Also on the docker are some of the best breweries from across the UK, as well as music from the Goldie, Norman Jay MBE and David Holmes

Friday 22nd – Sunday 24th July
Hosted at Levenshulme’s excellent Klondyke Club is The Levy Punk Weekender, three days of performances by some of the UK’s best punk bands. Taking place on indoor stages and outdoor in The Klondyke’s massive beer garden, there’ll also be a kids playing area, street food, games and loads more going on across the three days. Tickets start from £31.20.

Saturday 23rd July
All of you Alien fans are in for a right treat this coming Saturday at Ducie Street Warehouse’s Mini Cini – an Alien All-Dayer. This isn’t just any old rubbish day of some bloke popping the DVD into the machine and letting you get on with it – no, this features arguably the best cuts of each of the films. Okay, so the Alien Director’s Cut is a bit too long, but Aliens is superior, and the Alien3 ‘Workprint Cut’ is director David Fincher’s definitive version of his often hated trilogy ender. They’re also showing Alien Resurrection but you can just leave before then.

Is the Metrolink coming to Stockport?