A mysterious, fascinating and truly bizarre building in Old Trafford... 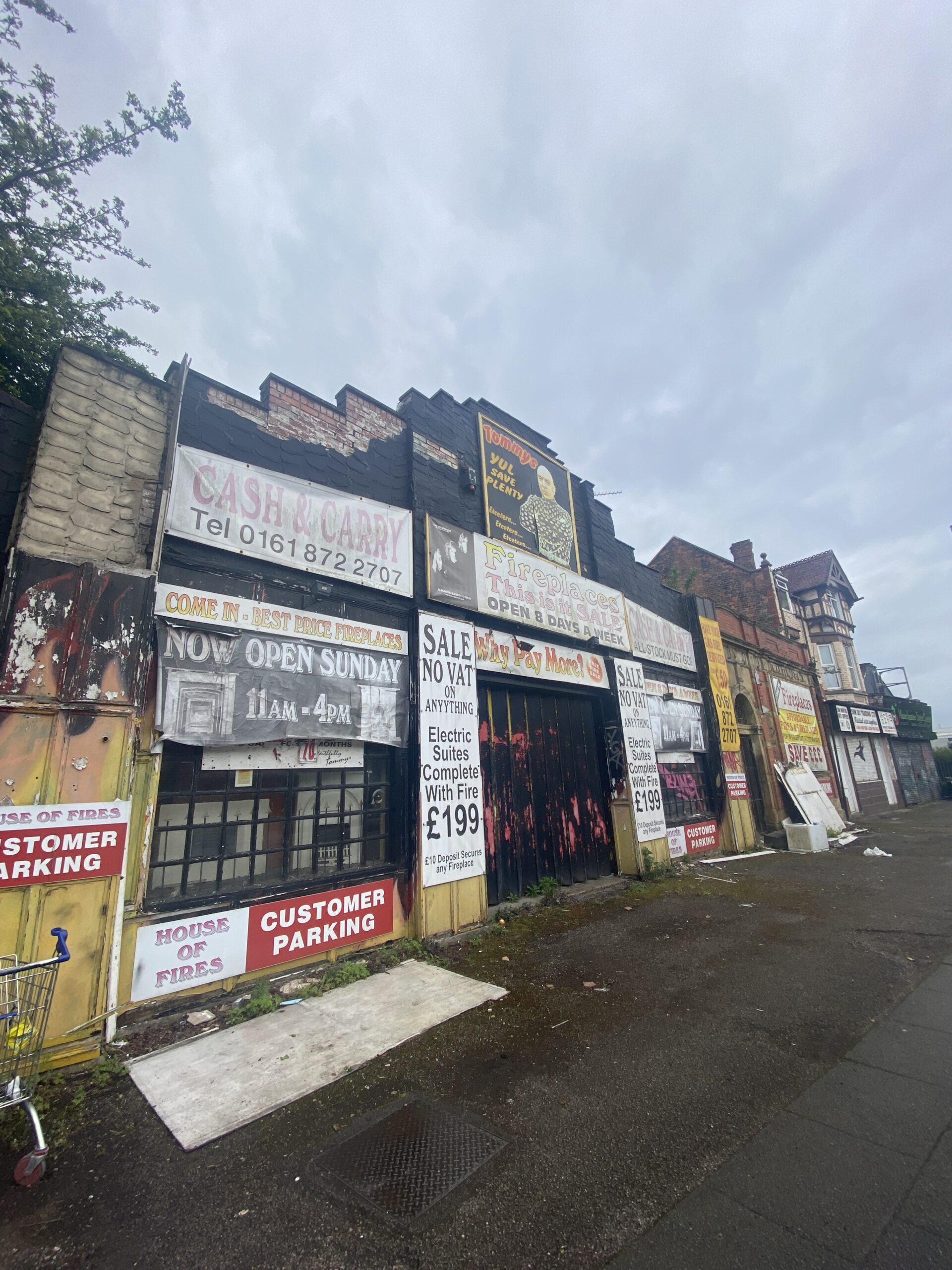 I ride my bike past this place every single day and it still fascinates me – Tommy’s House of Fires on Talbot Road in Old Trafford.

It’s stood here for absolutely ages, and with its mad branding and deteriorating state – I thought I’d look at the story behind one of the city’s most iconic landmarks.

I must admit, I have been encouraged to talk about this place after an image surfaced on Reddit, and a few people have done some investigating on the whole thing, and there’s even someone who knows Tommy on there, but we’ll get to all of that. 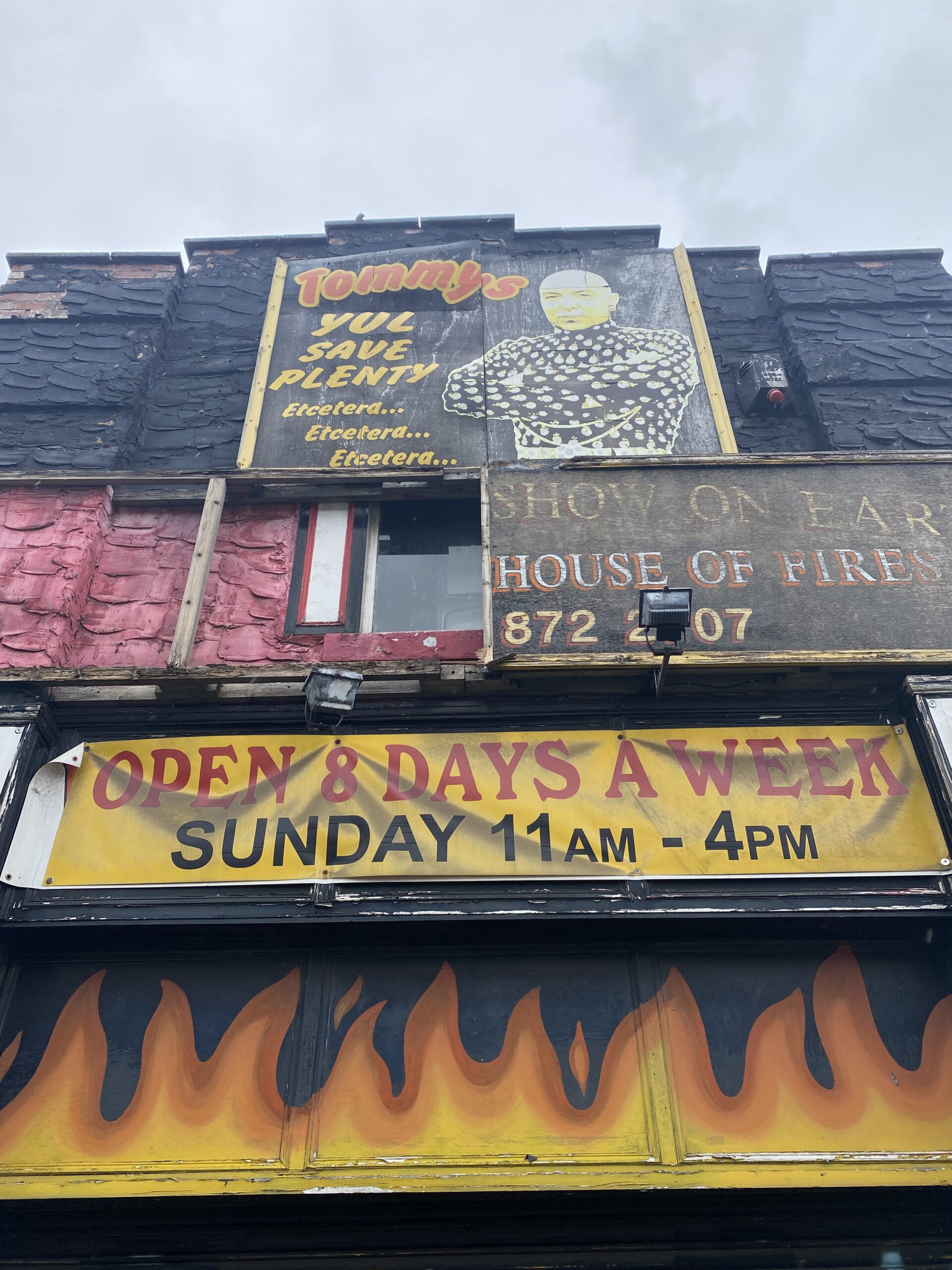 First of all, I think it’ll be good to start on all of that branding on the building – I mean, what in the actual fuck is going on there!?

The first thing that grabs you is the top sign; ‘Tommys‘ “YUL SAVE PLENTY Etcetera… Etcetera… Etcetera…” accompanied by who I presume is Tommy – head superimposed on 60s movie megastar Yul Brynner (hence the “yul save”) in one of his most famous roles as King Mongkut in ‘The King and I’. 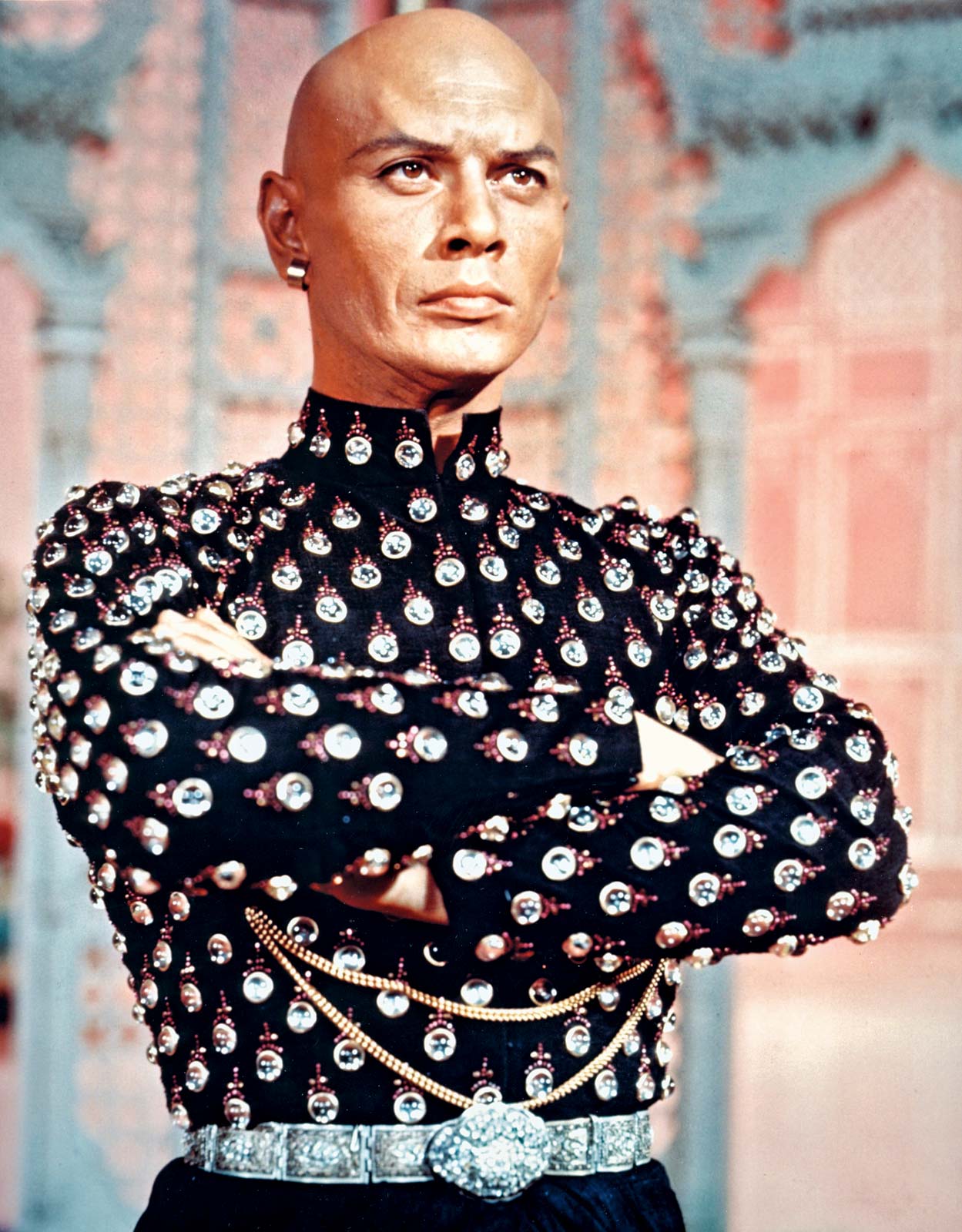 Yul Brynner in The King & I

Maybe Tommy had been told by all of his mates down the pub that he looked like Yul Brynner so much that he just decided to roll with it, or maybe the attraction of such a great pun was too strong, it forced him to shave his head and scowl to within an inch of his life.

Other crackers include “Open 8 Days a Week“, the “This is it SALE” and of course; the “FREE FIRE SALE“, which I’m not sure is a reference to the term meaning ‘the sale of goods or assets at a very low price, typically when the seller is facing bankruptcy’ or just the simple fact that fire is free. 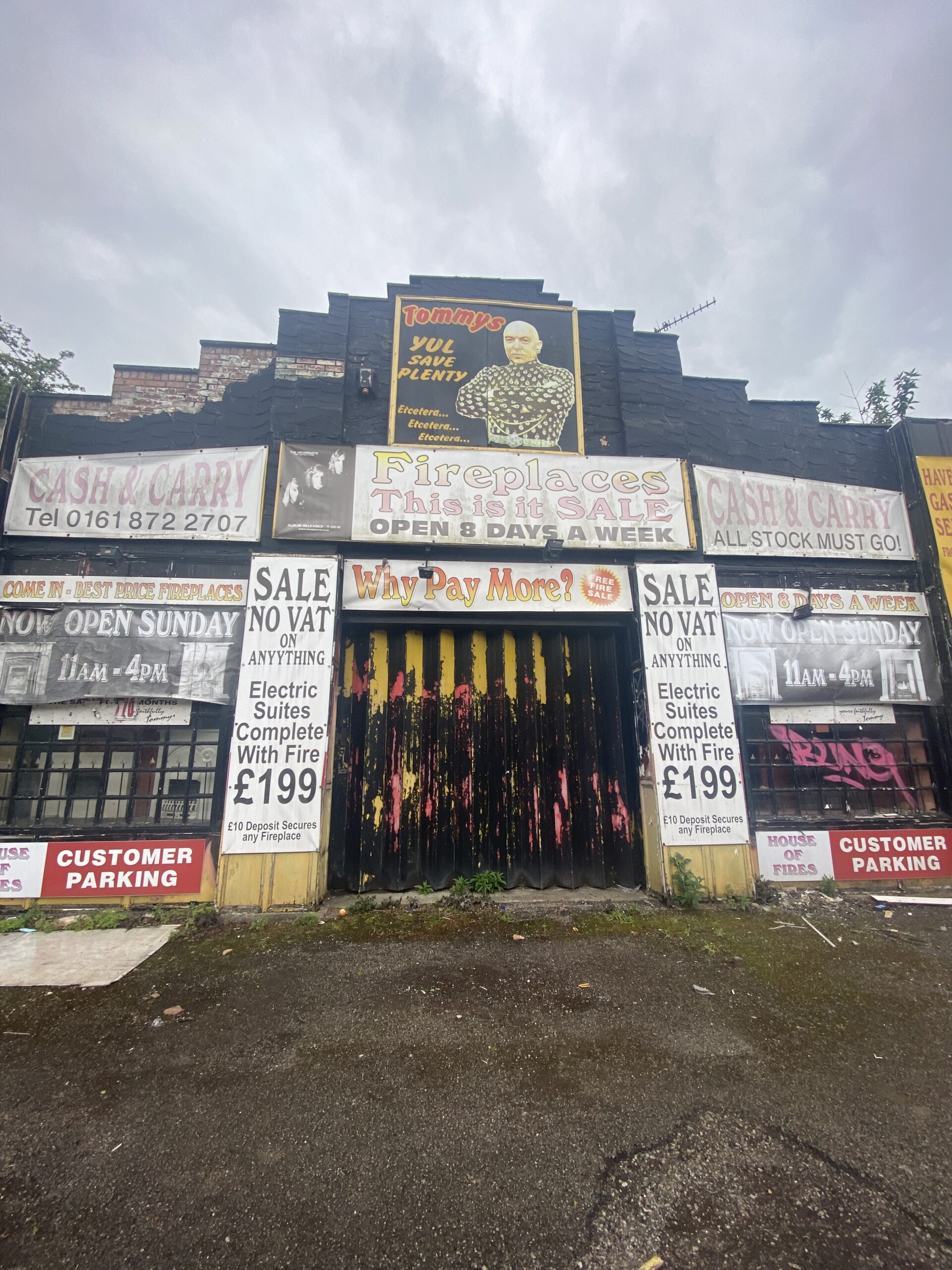 Over the years the building has slowly crumbled before our eyes, and many of the banners and signs have begun to fall off, fade and chip off – and it’s likely that the structure itself is in a dilapidated condition – perhaps reason why it’s not changed in years or been sold.

Much like the legendary Withy Groves Stores on Shudehill, many people believe the shop to have been a front for more ‘nefarious’ endeavours over the years, but one Reddit user insists that Tommy is his “mate’s dad” and that he’s “just a fairly eccentric guy“.

Apparently, Tommy is retired now and is doing well, and he’s actually wanted to sell the property but has found it difficult due to the state of disrepair and “lockdown won’t have helped”. 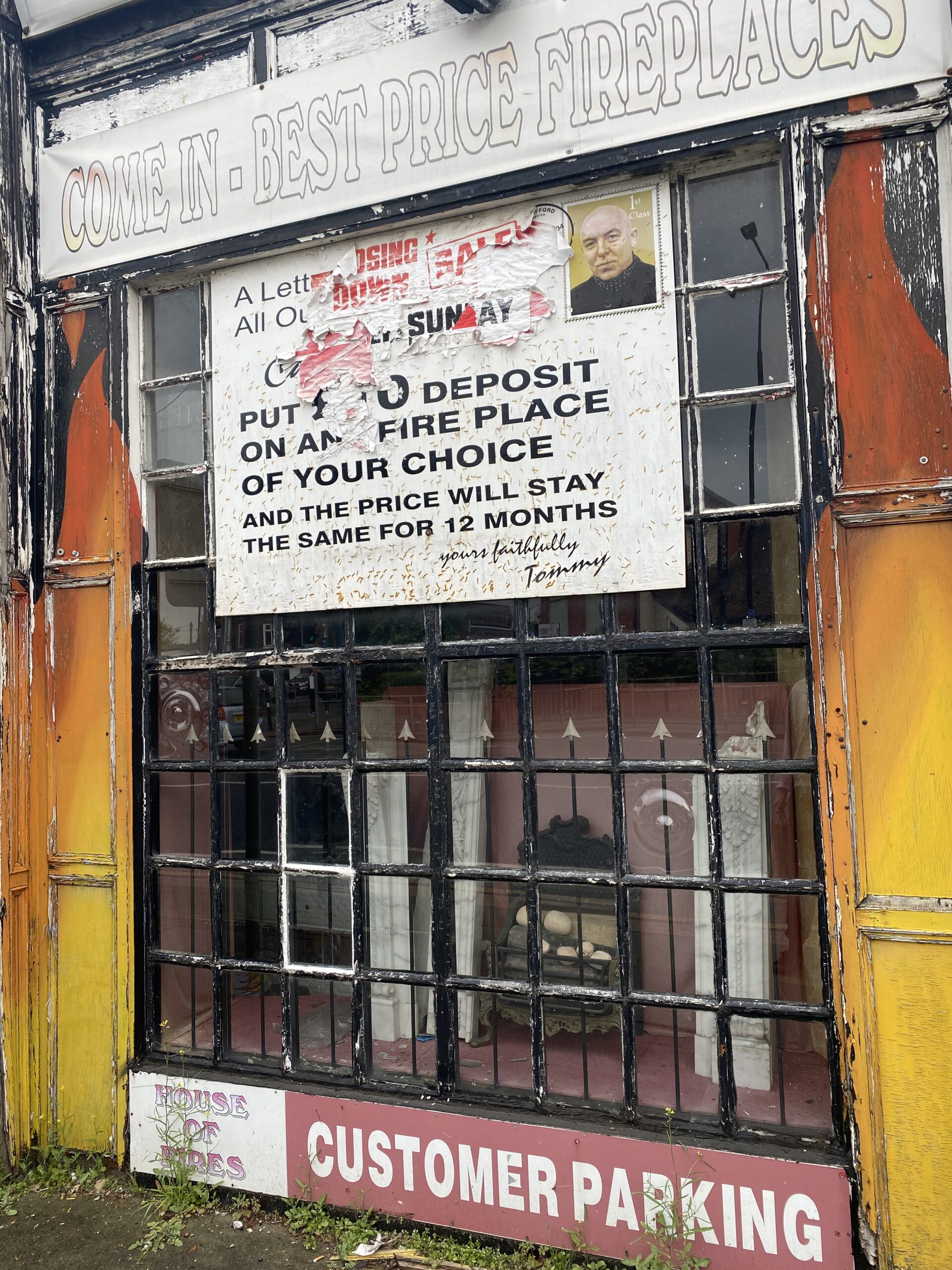 So definitely not a front for anything then. It was actually in fact a fully-operating business apparently until 2015 (which doesn’t sound right), when a review appeared on Yell.com – which, unfortunately for Tommy is titled “Avoid” and garners only 1 star. A user called ‘righton‘ writes…

Avoid!
This is a dodgy place to spend your money, this man never listens, talks rubbish and missells you items you don’t need.
he is very forceful and overbearing and overcharges and his aim is to rip people off.
He will tell you it is free to come to your property and then if you don’t want to buy from him once you realise how dodgy he is, he will try to make you forfeit your deposit.
avoid this headache.

Shit. Not very good. Maybe the “Yul Save Plenty” claim was a bit of bullshit then?

Like another Reddit user, I’ve conducted a pretty extensive search of Companies House and there’s VERY little about the place anywhere on the internet, except of course the above review and all of us people talking about it.

User ‘InsistOnPoachedEggs‘ did find the following website though, which looks like it was made on Microsoft Publisher in 1997 and is pretty impressive… 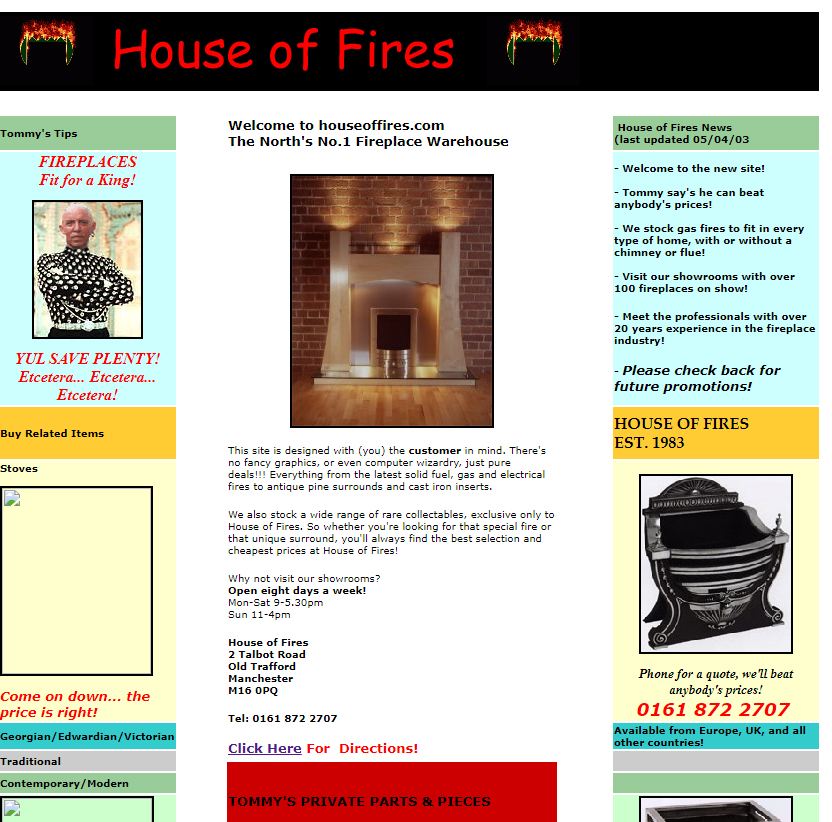 So for the time being, until Tommy can sell it, it seems like this place is set to continue being one of those Manchester curiosities that you see every day but pay very little mind to.

I hope Tommy gets the chance to sell it so that he can enjoy his retirement – so if you’re looking to set up a business, perhaps something to appeal to the footy crowds every week – this might be the perfect place!

Black Dog will re-open next week with food from… Salt & Pepper!