From Elnecot to Erst: The History of Ancoats 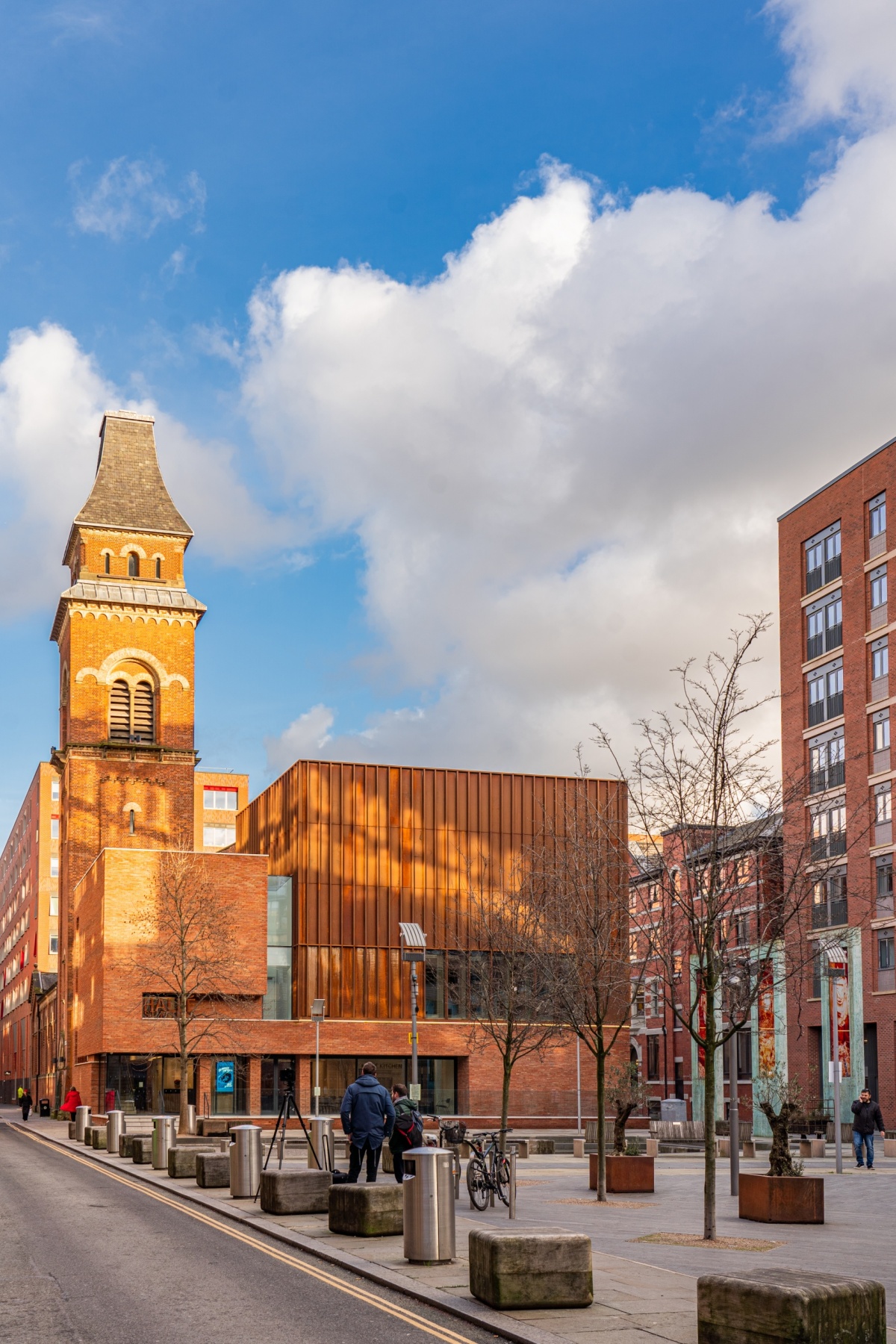 Most of us now know Ancoats as THE place to live for anyone who has an inch of coolness – a hub for social activity and an area which is firmly becoming the best place to dine in Manchester.

So how did Ancoats change from a few lonely cottages, to the world’s first industrial suburb, to then become Manchester’s most desirable foodie destination?

Well, it’s a pretty long, winding road, with just a few wars, famine and a fair whack of housing crises in between. Buckle up because we’re going to start right at the very beginning…

Nestled somewhere close to the beginning of the whole Ancoats story is the reason why Elnecot on the corner of Blossom Street named itself just that.

Original names of Ancoats are mentioned as being ‘Annecotes’ or ‘Antecotes’ in the 13th century which translates to ‘lonely cottages’ nowadays. But the very first ever mention of a settlement was first recorded in 1212 as ‘Elnecot’. 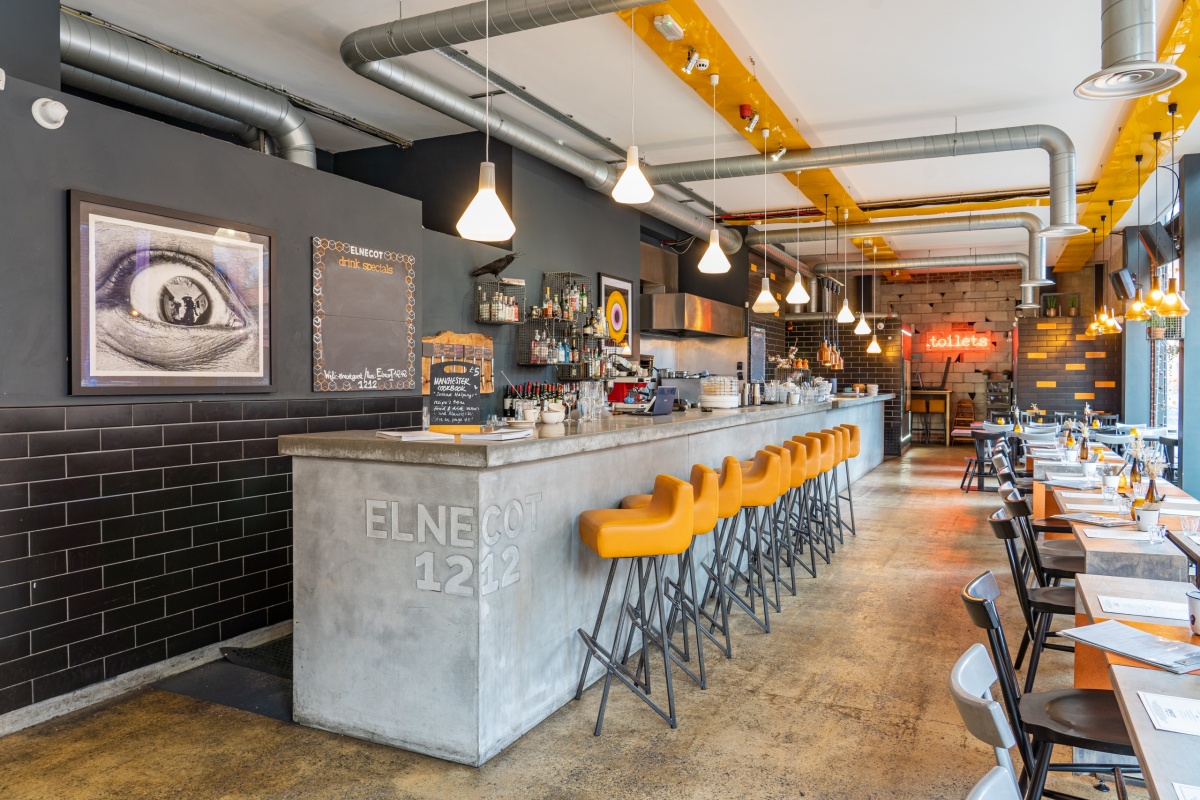 Now, Elnecot today is a fantastic place for a spot of bottomless brunch or a Sunday Dinner on a weekend, and it’s also somewhere where you’ll also find the likes of heart, head and testicles on the menu pretty regularly.

You might want to call it a Bush Tucker Trial but these deft menu touches are actually a homage to the medieval past of the area, tying in with both the name and the rich history associated with the very streets the restaurant sits on.

Now, medieval history isn’t particularly my strong point, and it’s clear that there weren’t too many people writing stuff down back then. So, I took to speaking to my friend, who has a Masters in it, but unfortunately, we just ended up getting smashed and talking about her love life instead. 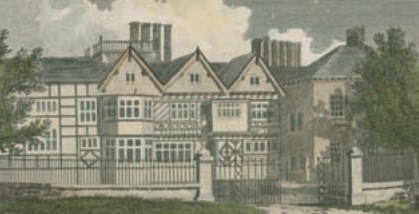 The ‘lonely cottages’ remained pretty lonely for a good few decades, with the first market not being recorded in the area until 1282. And for the next few centuries, life was peaceful and serene, with not much happening in ‘Ancotes’ until Ancoats Hall was built in the 14th century.

In 1596 the Hall was erected by some rich family called The Mosley’s. It remained in his family for the next 2 centuries allowing the family to become Lords of the Manor of Manchester.

I’m a bit annoyed that I can’t find more information about this weird 200-year gap but right up until the late 1780s, Ancoats remained fields, cottages, and probably a few sheep lazily chewing grass and getting shaved twice a year.

But something was bubbling away just a short distance away, the beginnings of what would go on to become the centre of the industrial world – with Ancoats right in the middle of it all. 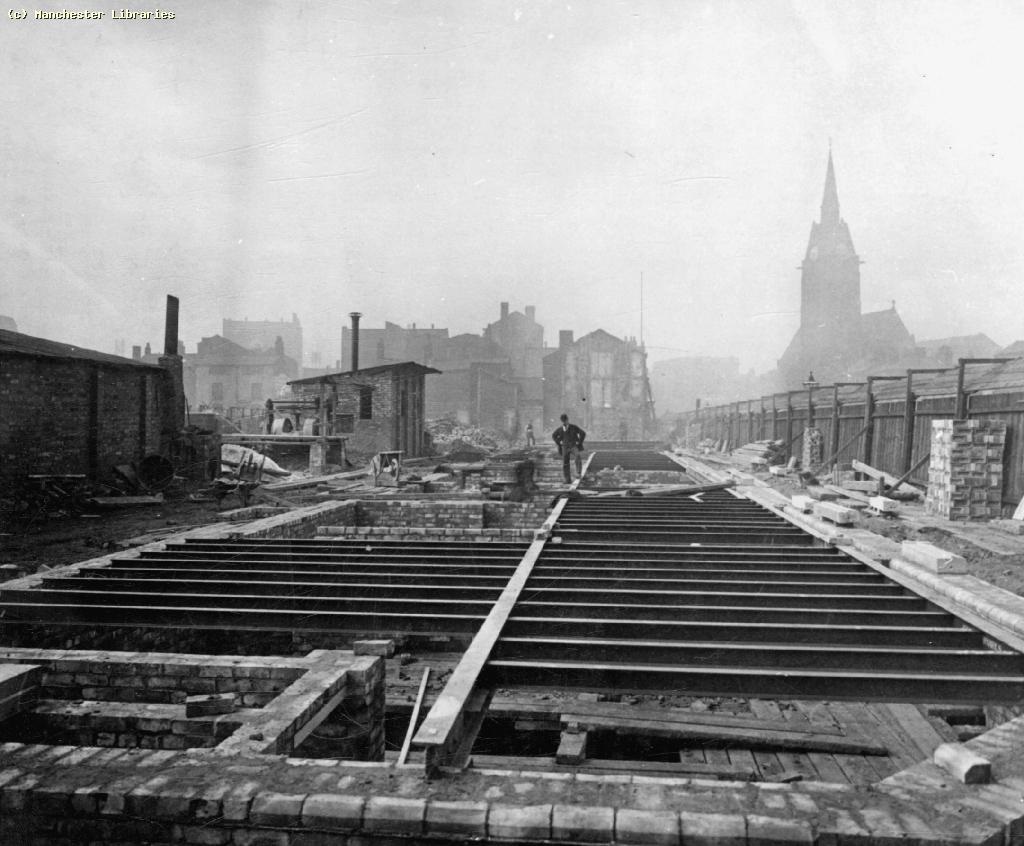 So, please don’t mind me for jumping straight to the 18th century – when most of the history of Ancoats actually begins. The Mosley family left the old Hall, trade boomed and the population increased to an amount those lonely cottages could never have handled.

A nice stroll around the area today uncovers a whole host of clues as to what the area became, with places such as Old Mill Street, Gun Street, Cotton and Silk, all serving as reminders of the history of the area. 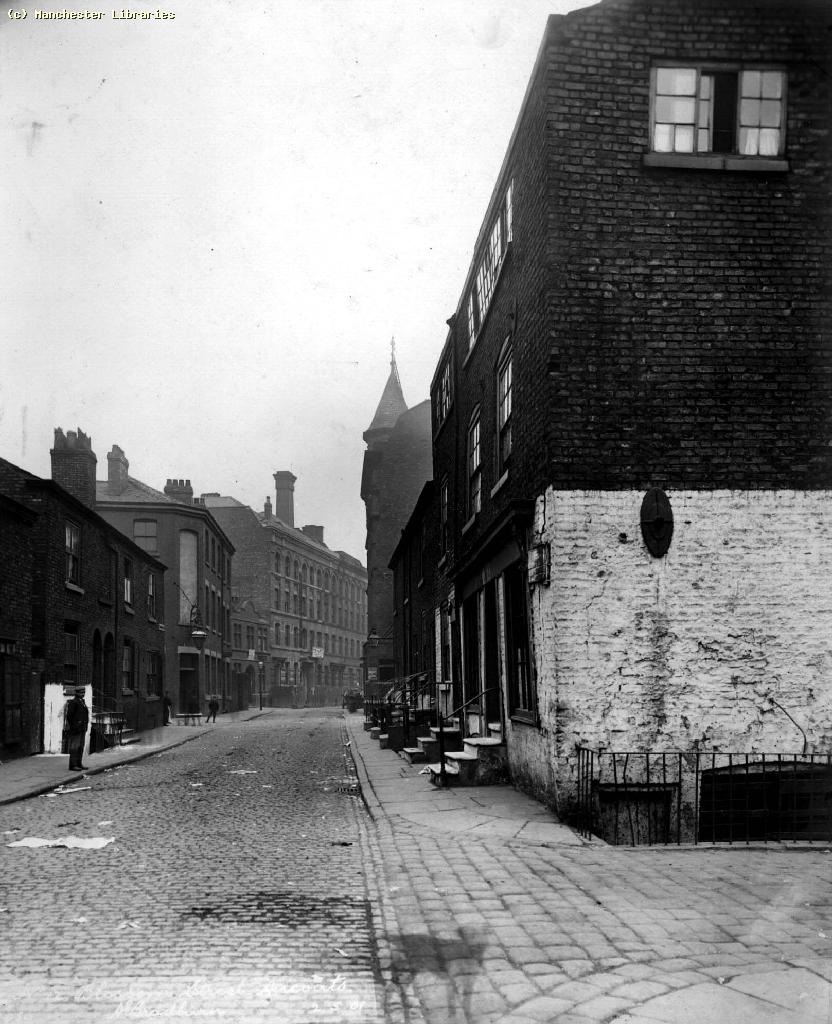 But why Gun Street? Well, I paused here to delve into whether people were making guns here but instead stumbled upon a rather interesting bit of information about the Sunday School that popped up on here.

The first-ever in Manchester, the Sunday School was gifted to the town in 1788 by a Mr Simeon Newton, a man with a rather exciting history himself and someone who wanted to provide for the poor of the neighbourhood (of which by this point there were many).

The whole concept of Sunday Schools themselves goes hand-in-hand with the Industrial Revolution, as children began to work, they were no longer learning how to read and write. Sundays which were previously strictly reserved for a day of rest became the only day they could learn. 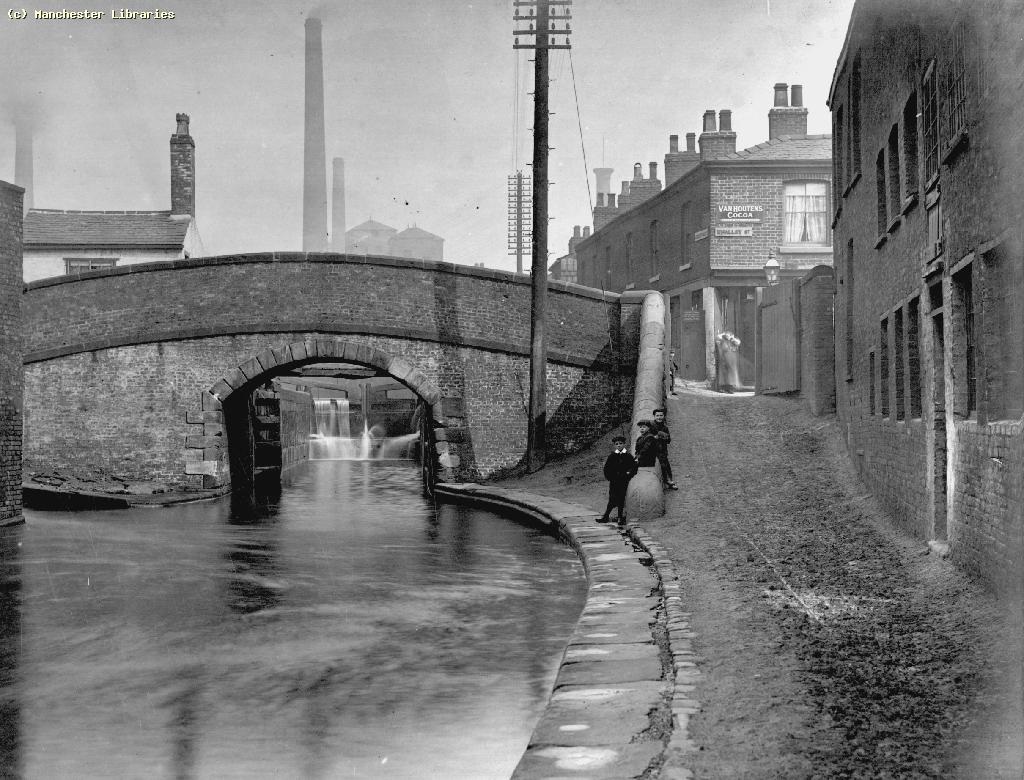 I’m going to quickly get back to the 1800s because I just found myself in a very deep dark hole looking at the history of umbrella makers in Ancoats.

The Rochdale Canal, cutting straight through Ancoats, opened up in 1804 and led to the rapid development of mills and industry in the area. This, in turn, led to thousands of workers moving to the area and by the 19th century, more people were living in Ancoats than lived in nearby towns such as Bury. 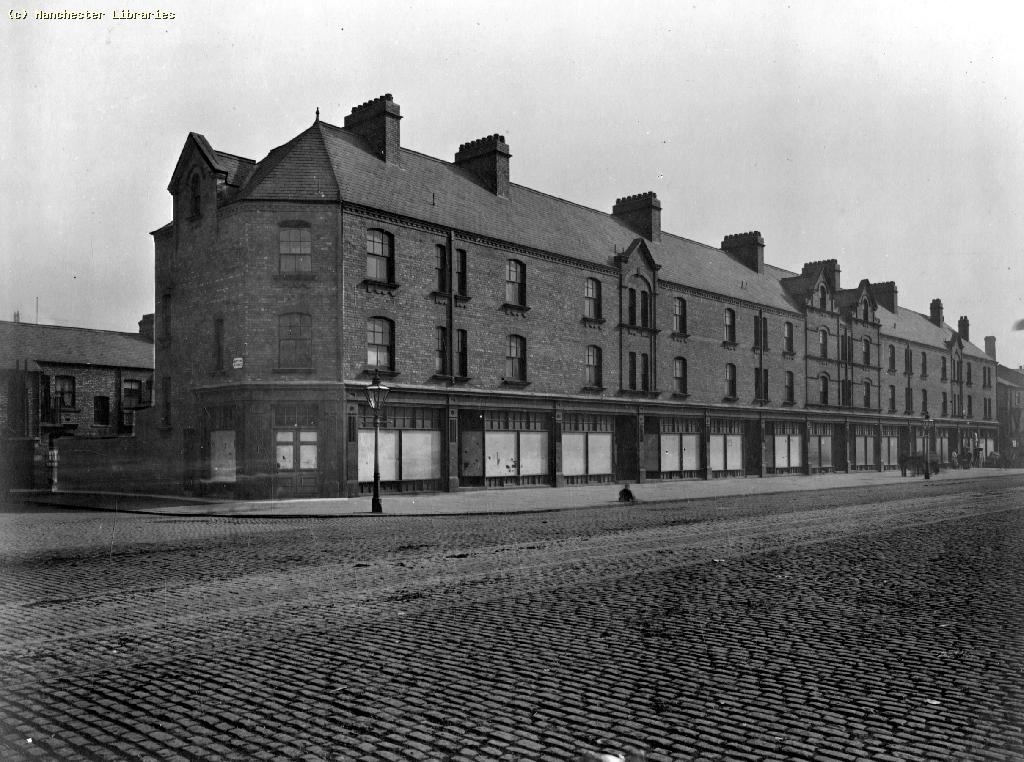 The area became ‘the world’s first industrial suburb’, a residential district of the modern world which was intended for the occupation solely of one class – that of the new urban working class.

As you’d expect with any working-class area of the time, disease was rife, with frequent cholera outbreaks and dismal living standards. Houses were tiny, packed to the rafters and extremely close together. It wasn’t uncommon for them to fall down entirely, often with people in them.

By the 19th Century, Ancoats found itself with a new name again, ‘Ancoats Little Italy’ as over 2,000 Italians found themselves living in the area due to political and economic upheaval in the country. 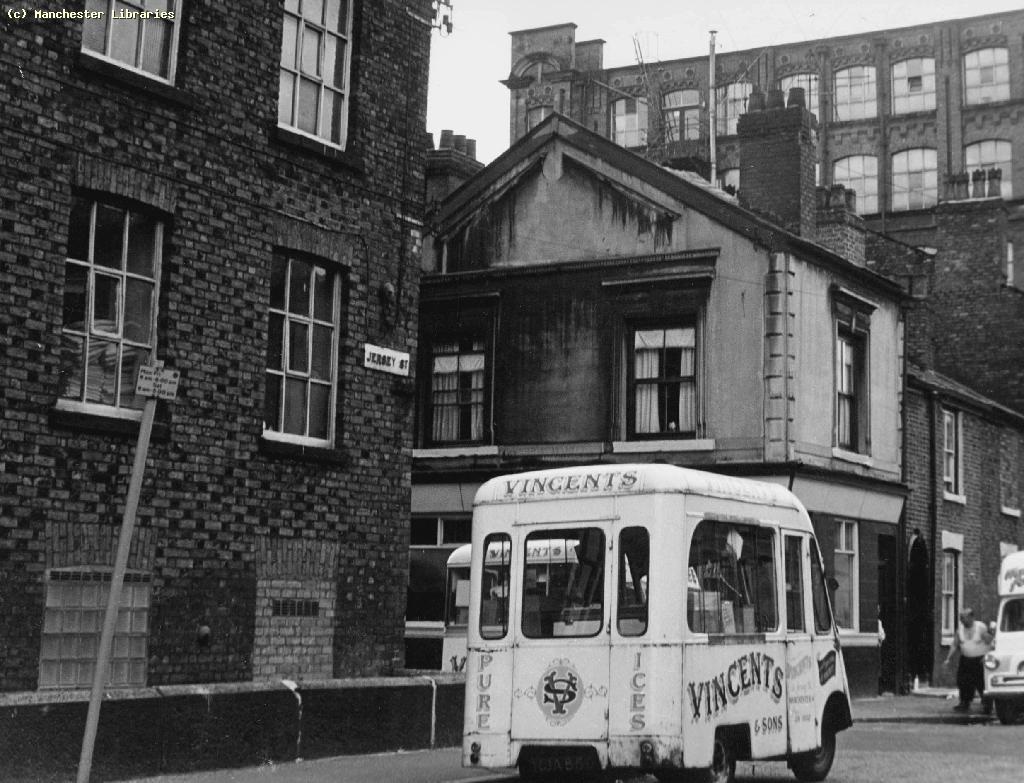 The neighbourhood became home to the manufacturing of Domenico Antonelli & Sons pianos in 1895 and they pretty much pioneered the British ice cream industry with the arrival of their gelato recipes and indeed wafers and cones – which Mancunians went crazy for.

The Fall and Rise of Ancoats

Ancoats’ industry peaked in 1912 when it was producing 8 billion yards of cloth, but with the break out of the war in 1914, the area’s decline started to set in.

With supplies of raw cotton in short supply, the government instead encouraged their colonies to build their own mills for cotton, therefore cutting out vast swathes of UK manufacturing at the time.

A brief stint of producing aircraft during the war and then establishing itself in the field of newspaper printing didn’t help the decline of the area in the 20th Century, and by 1989 The Daily Express stopped publishing and the nails were well and truly in the coffin.

This period is how my mum and dad remember Ancoats to be, as an area you definitely wouldn’t step foot in, never mind eat Neapolitan pizza or drink beer in a sunny spot.

But the 21st Century saw some serious regeneration, including heavy investment from the likes of Urban Splash, and now the area has become a home to young professionals, pets, children and an abundance of growing independent businesses.

‘Elnecot’ is now home to Best New Restaurant nominee, Elnecot, one of the best pizzas in the world at Rudy’s, winner of The Best Bar in Manchester, Jane Eyre; a restaurant that even the National press has loved, Erst, and not forgetting Manchester’s first Michelin starred restaurant in 42 years – Mana.

Being voted the 13th Coolest Place to Live in the World can only help to bolster the Ancoats appeal, and with more places opening up at an astonishing rate, and plenty more accolades on the horizon – things are certainly looking up indeed.