From Ancoats' 'Little Italy' to Market Street: 180 Years of Ice Cream in Manchester

The city is even credited as being where the ice cream cone was invented! 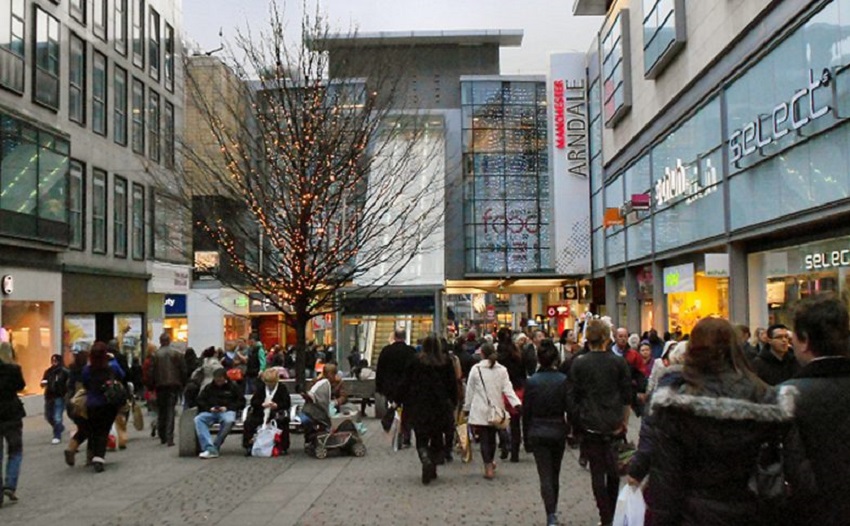 Take a walk down Market Street today and you’ll notice many, many things. Although the COVID-19 pandemic has seemingly done away with the vast majority of those annoying street performers, you’ll still find the odd busker, alongside throngs of people going about their business.

It’s certainly never the most pleasant of walks, but it’s mostly a necessary evil – unless you can duck down one of the side streets and make your way to the other side of town that way of course.

On your walk down Market Street though, you’ll most likely have noticed that little Ice Cream kiosk outside Tesco and further down, another little Pizza kiosk outside Boots. They’re both part of the Scappaticci family, who have been serving scoops of ice cream for over 100 years, and are part of an expansive 180 year history of the city. 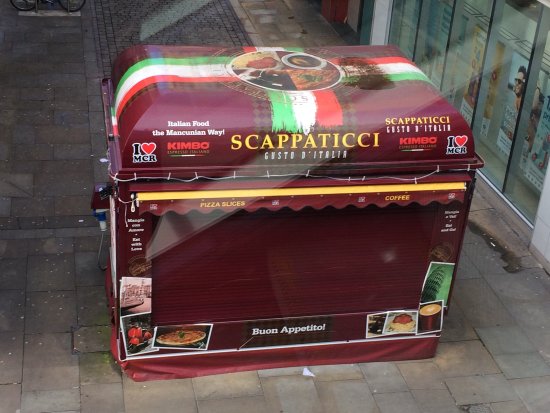 All those many years ago, in the early 19th Century, many Italians emigrated to Manchester and settled in the area around Ancoats, mainly due to poverty and political instability back at home.

You see, Italy in the 19th Century was undergoing a consolidation of states into one single country – the Kingdom of Italy. Throughout the 1820s and 30s there were many large rebellions and insurrections, and in 1848 – a series of revolutions resulted in Rome becoming the capital of the newly formed country in 1871.

With all of this political and social upheaval, many Italians fled the violence and wars, with around 500 Italians settling in Ancoats, which would later rise to around 2,000 by the beginning of the 20th Century. 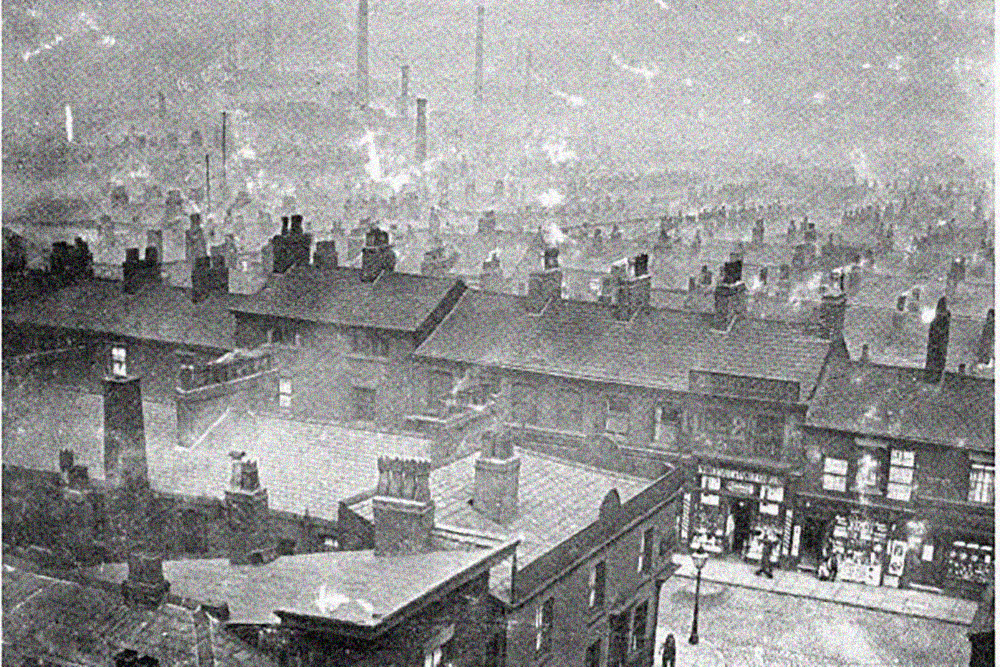 The area quickly became known as ‘Little Italy’ and it was here that ice cream changed the lives of Mancunians forever.

With a new ice room having opened up at Mary Jozeph’s Fruit and Italian Warehouse on Market Street, the city had already been exposed to the wonderful new food early in 1801, but it wasn’t until a warehouse opened on Blossom Street that it all really kicked off.

Used to house fruits, vegetables and fish, the warehouse also featured an adjoining ice-making factory – keeping things chilled and fresh, and it was here that savvy Italians made great use of the surplus ice. 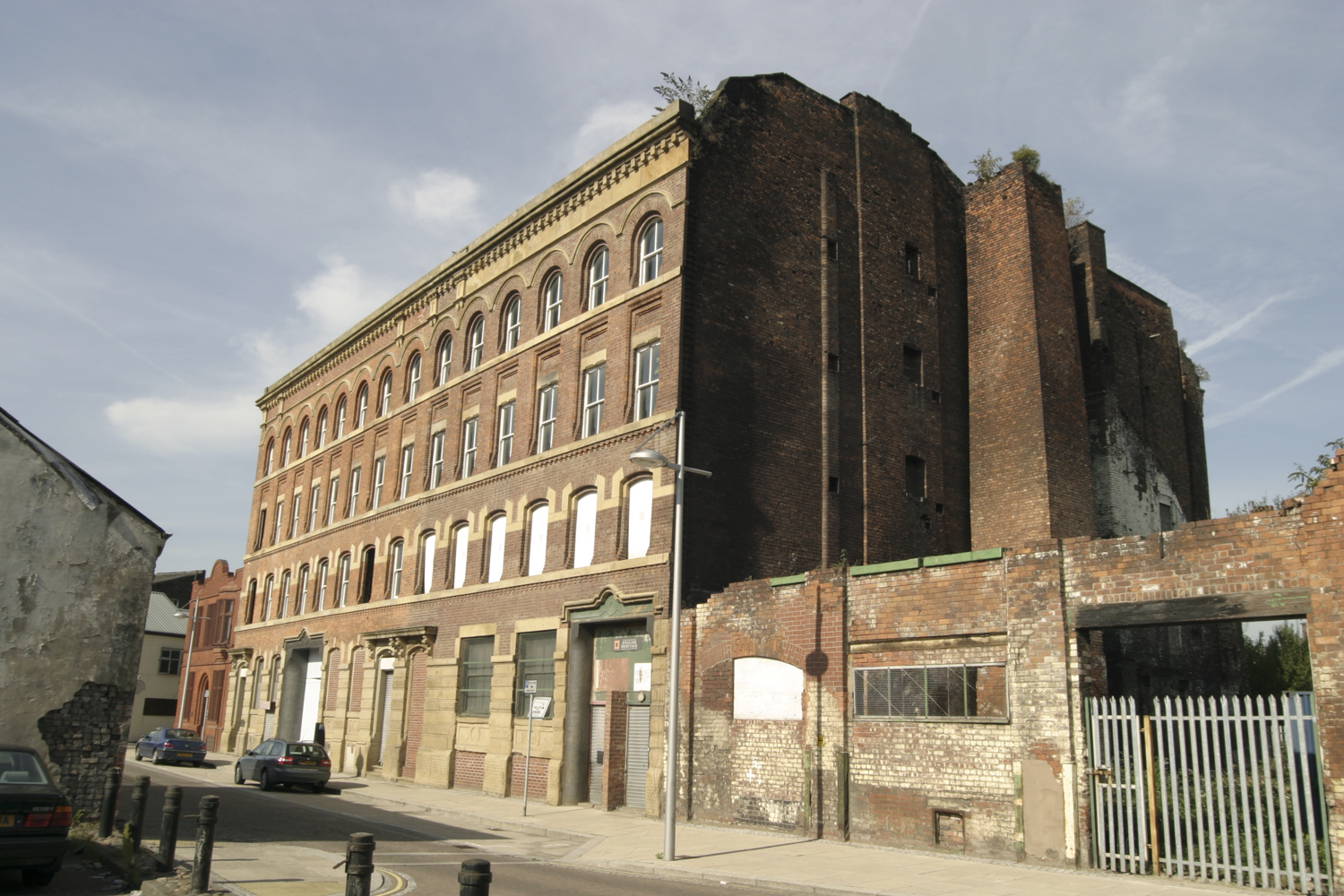 By the turn of the century, Manchester’s ‘Little Italy’ was home to around 70 Italians working as ice-cream vendors, including Rea, Sivori, Granelli, Meschia, Levaggi and of course – Bernado (Ben) Scappaticci.

Made by hand in the family cellar, the ice cream was served in a ‘licking glass‘, also known as a ‘penny lick’ – which was a little glass bowl which was returned to the vendor when you’d finished, where they then rinsed it out and re-used it. 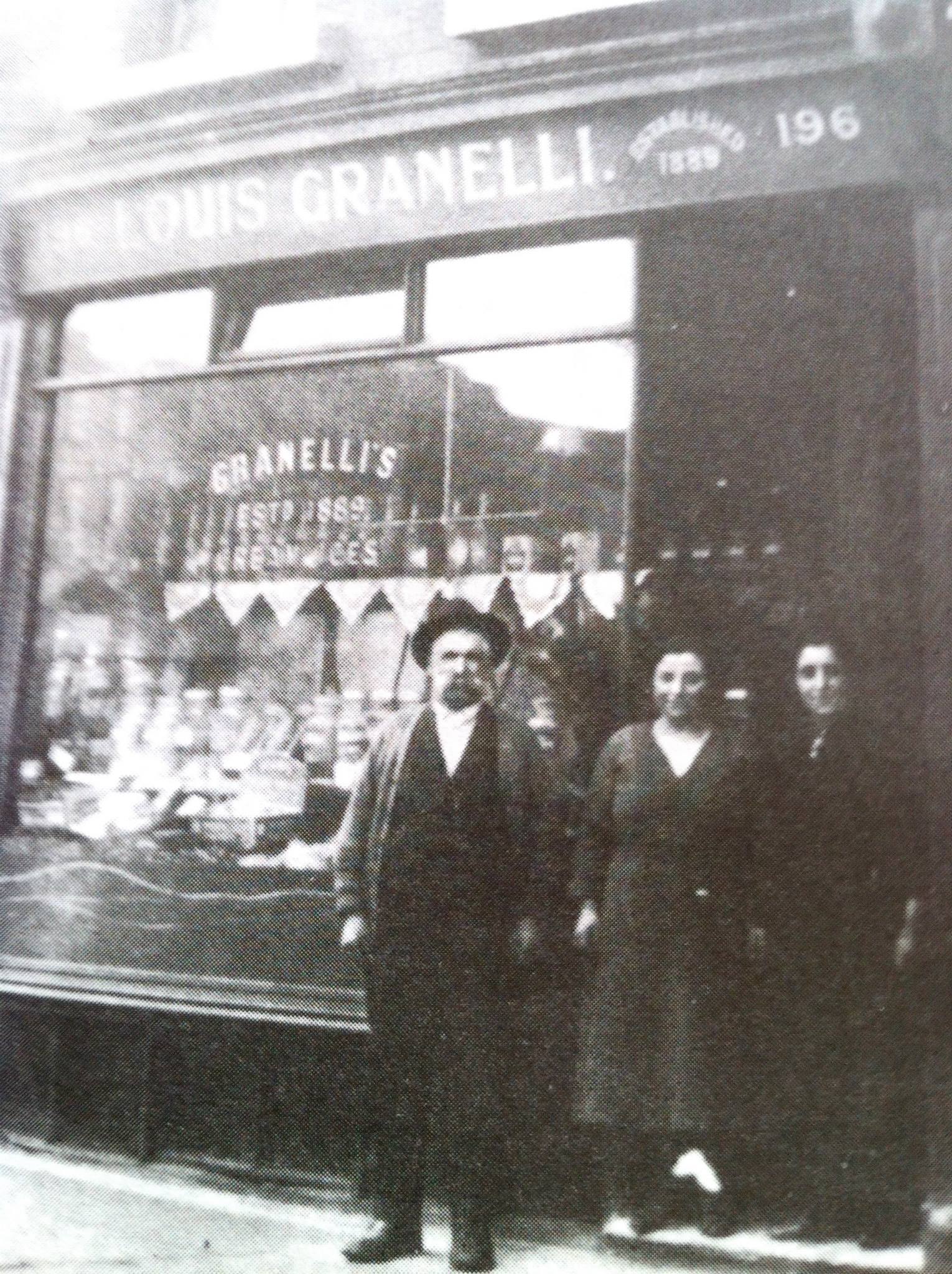 As you can imagine – this wasn’t very sanitary, and quickly ‘penny licks’ were being attributed to cases of typhoid and cholera in the area, and so health authorities threatened to ban the sale of ice cream in the city.

A major blow for the Italian families who relied solely on their delicious creations. 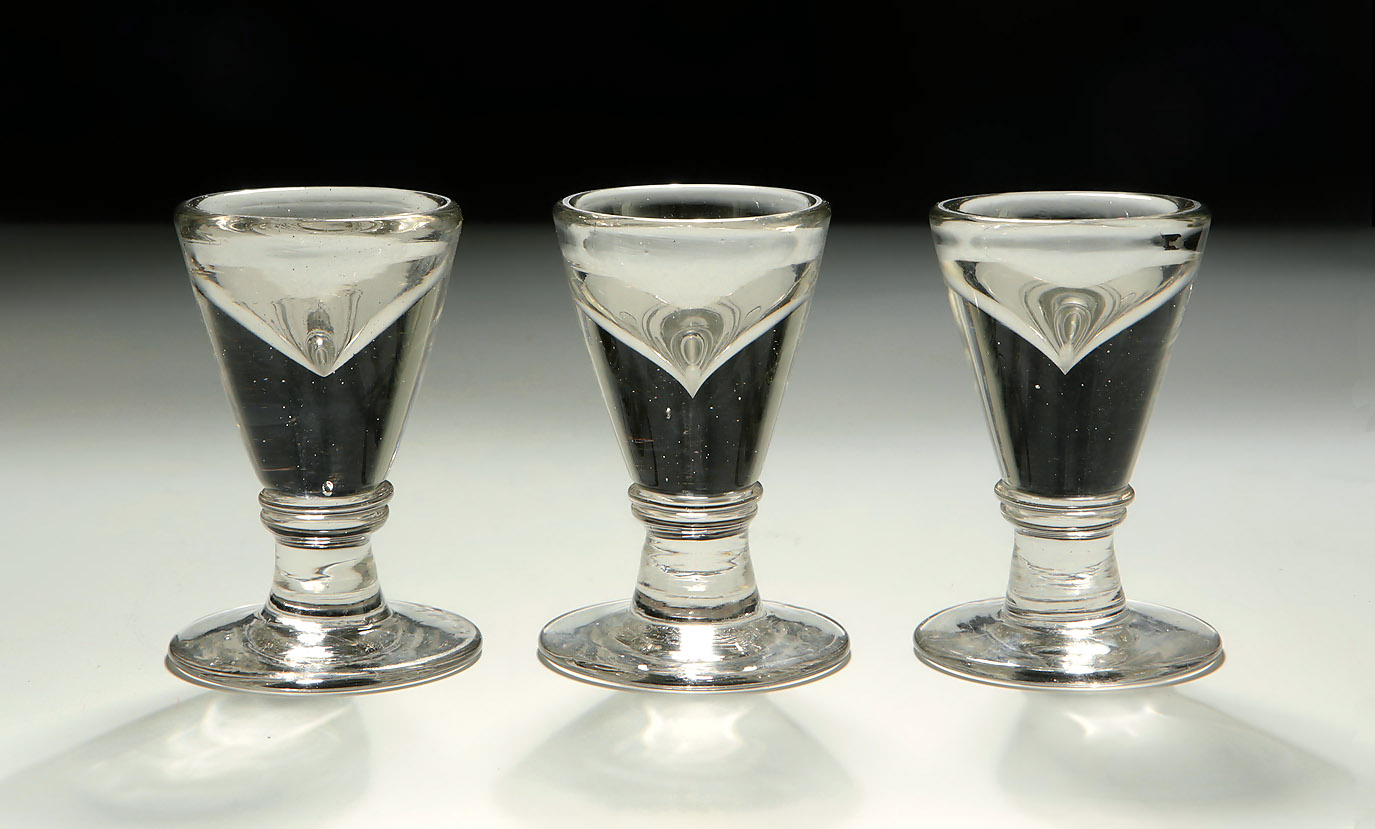 Luckily, one particular Italian vendor, a bloke called Antonio Valvona, who lived on Great Ancoats Street, well, he was also a biscuit maker as well as an ice cream maker and around the year 1901 – he invented the Ice Cream Cone!

He patented his invention as an ‘Apparatus for Baking Biscuit Cups for Ice Cream‘ and that was it – nothing could stop ice cream now – it was unstoppable. 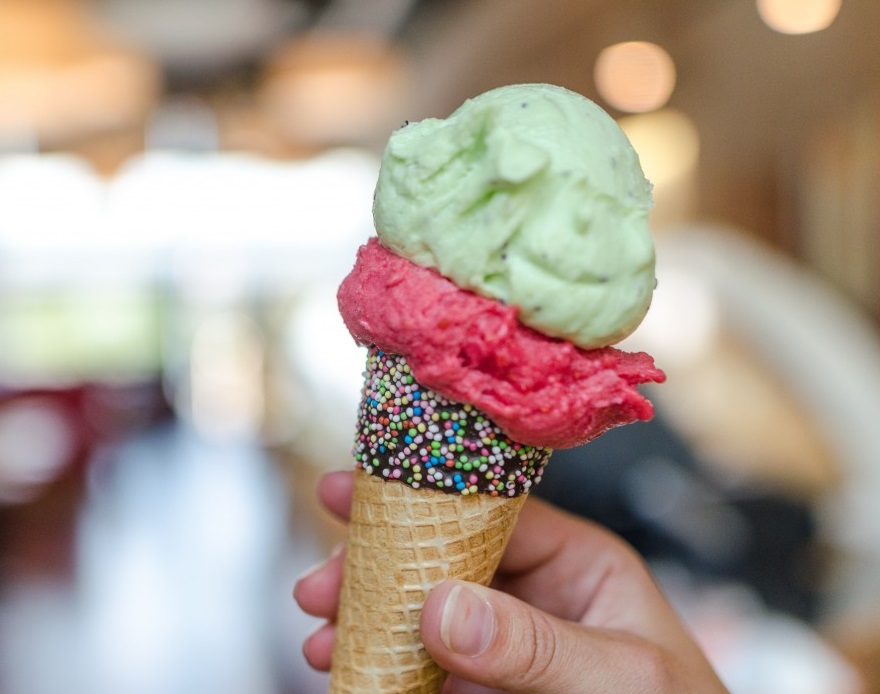 The Cornet. Invented in Ancoats!

By this point the ice cream was carried by horse and cart, bicycles and push carts, with vendors roaming the streets of the city, shouting their heads off to let people know that they’re outside.

It was also common for ice cream vendors to head to the city’s markets, creating what was commonly known as ‘Sucker’s Alley’ every couple of days a week on Shudehill. 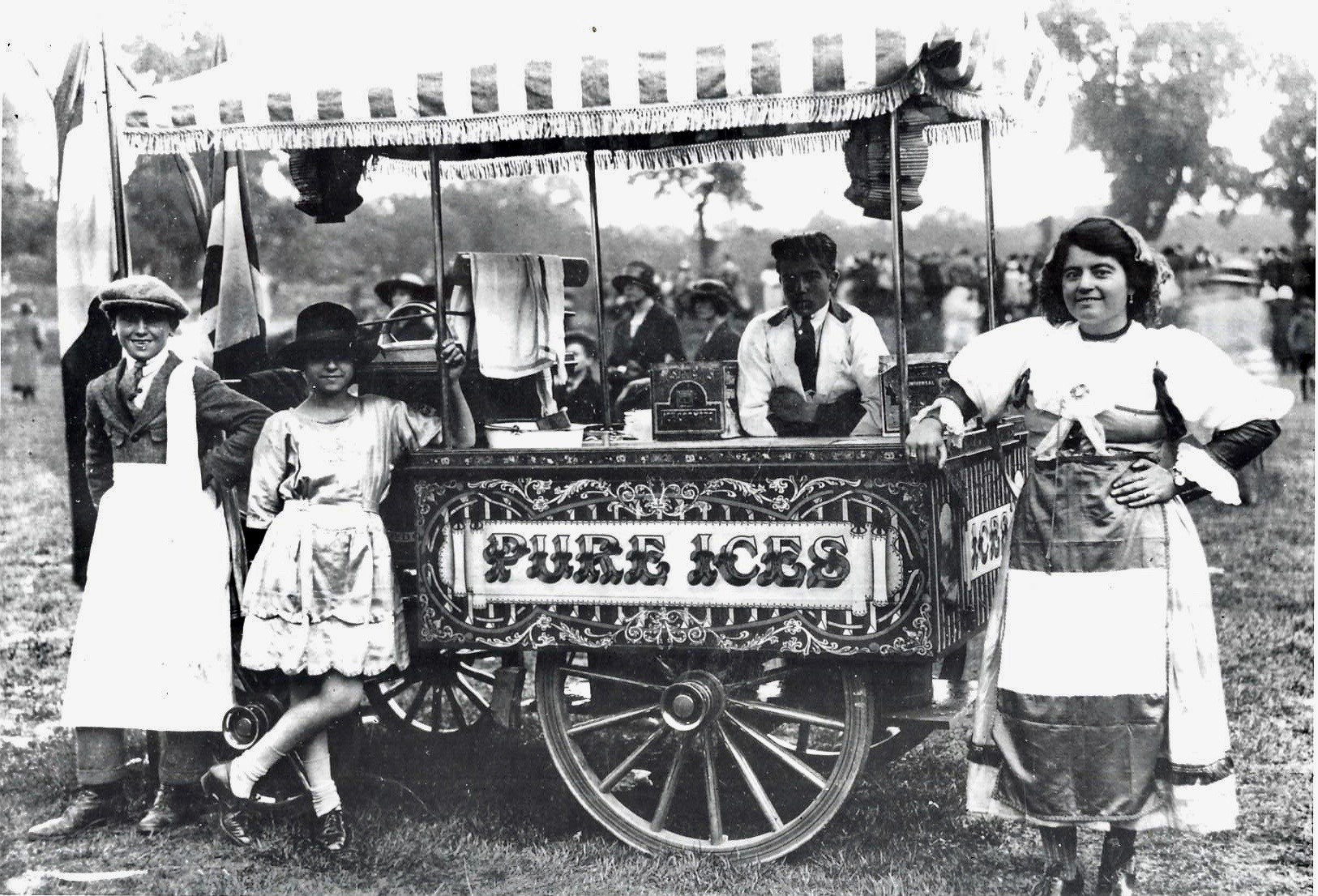 As the vendors shouted through the streets of Manchester, probably destroying their vocal chords in the process, some bright spark decided that instead of shouting – he should use a hand bell instead.

By the 1950’s, these ‘tunes’ became jolly musical ‘chimes’ and thus that excitement of hearing the ice cream van coming down the street was born. 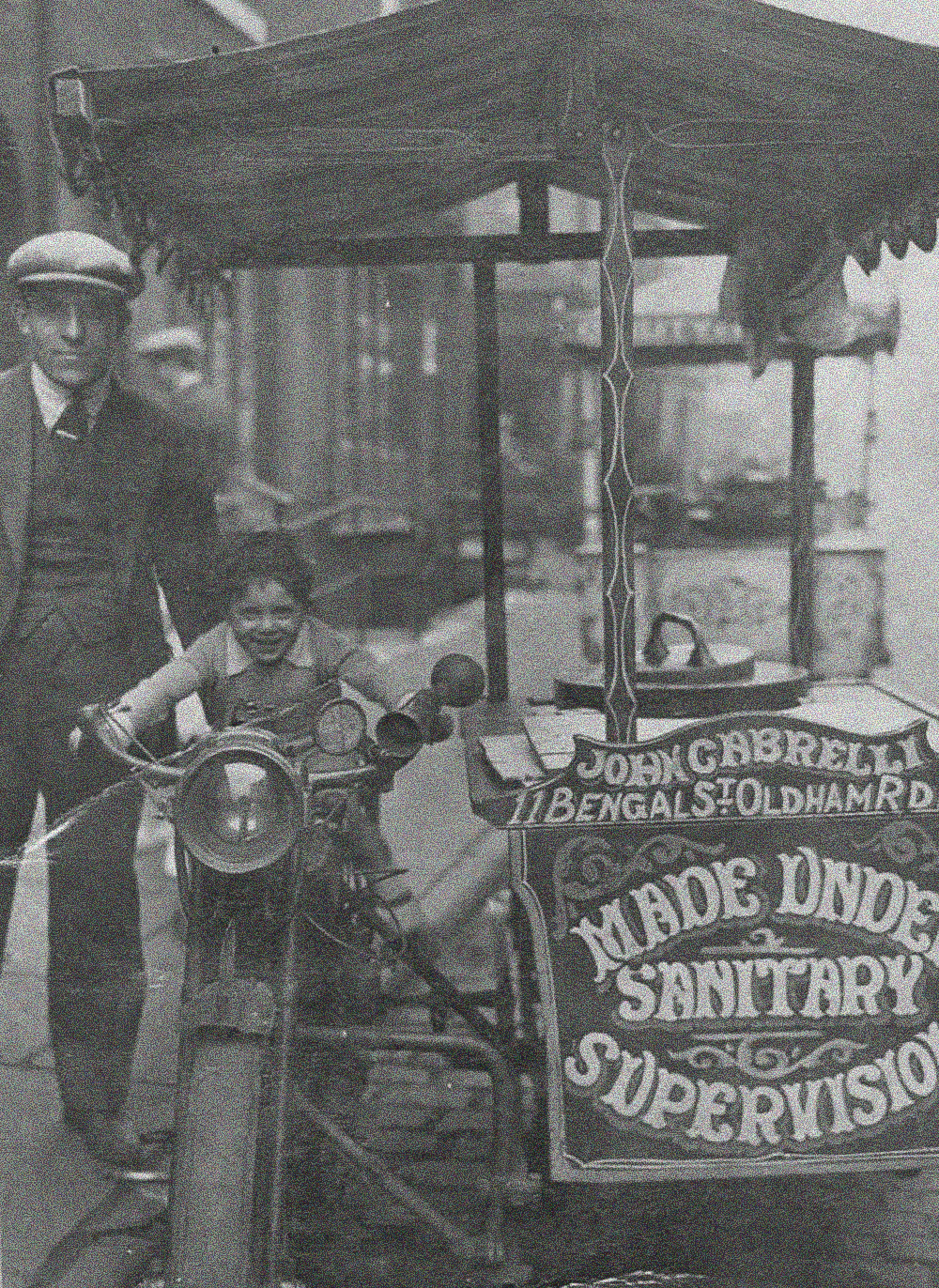 Well, the Second World War happened, and Little Italy pretty much became a no-go area as Italy (under the fascist dictator Benito Mussolini) allied themselves with Nazi Germany – creating an almost inescapable anti-Italian feeling in the city – which unfortunately resulted in riots and violence against communities.

Seen as a potential threat to national security, Italian-born males between the ages of 17 and 60 were interned, even the ones that fought for the British in the First World War, as well as those who had taken up British citizenship. 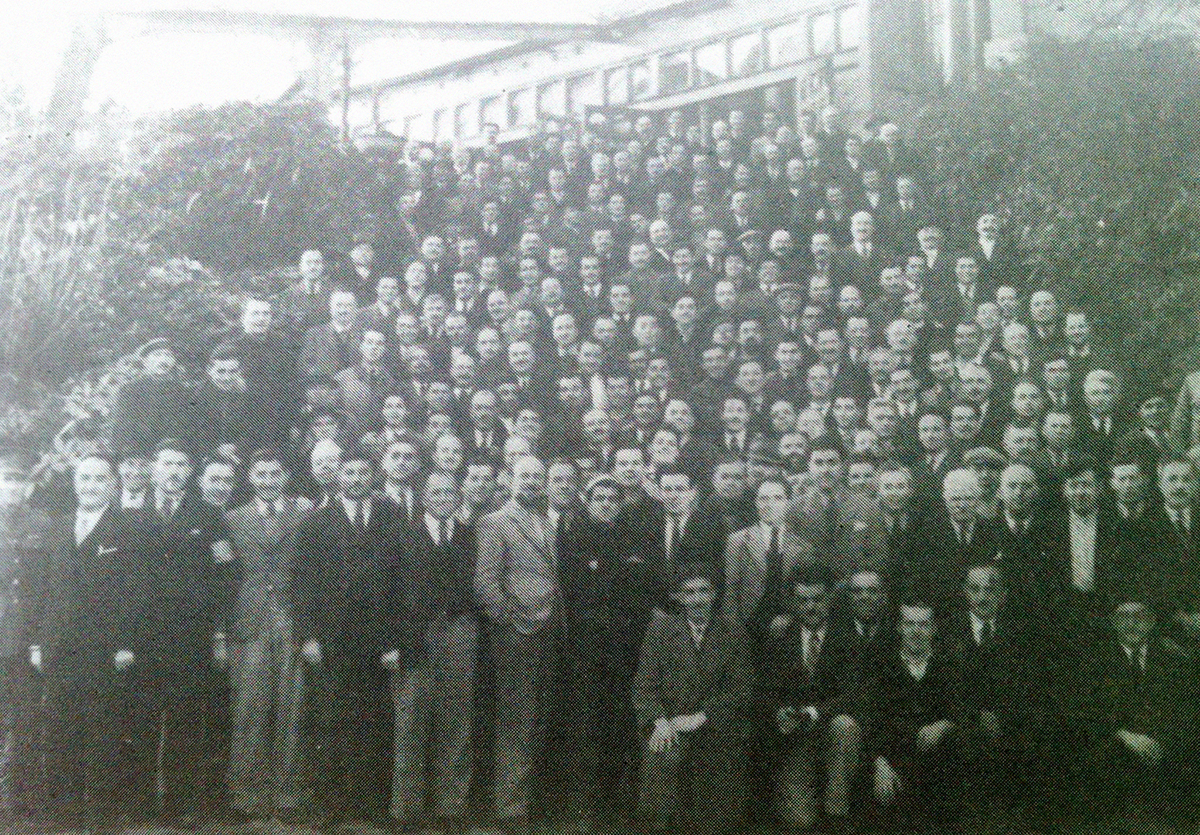 These internees were transported to camps around the country and throughout the Commonwealth, while those left behind in ‘Little Italy’ were subject to a strict curfew and were banned from holding public meetings.

It should be noted that many of the British-born Italian men joined the army to fight against the fascists’ threat in Europe, joining the local Manchester regiment during the conflict. The treatment of Italian-born nationals at the time was seen as all for the greater good in the conflict, but in hindsight – was another black spot in the deteriorating ledger of the country’s history. 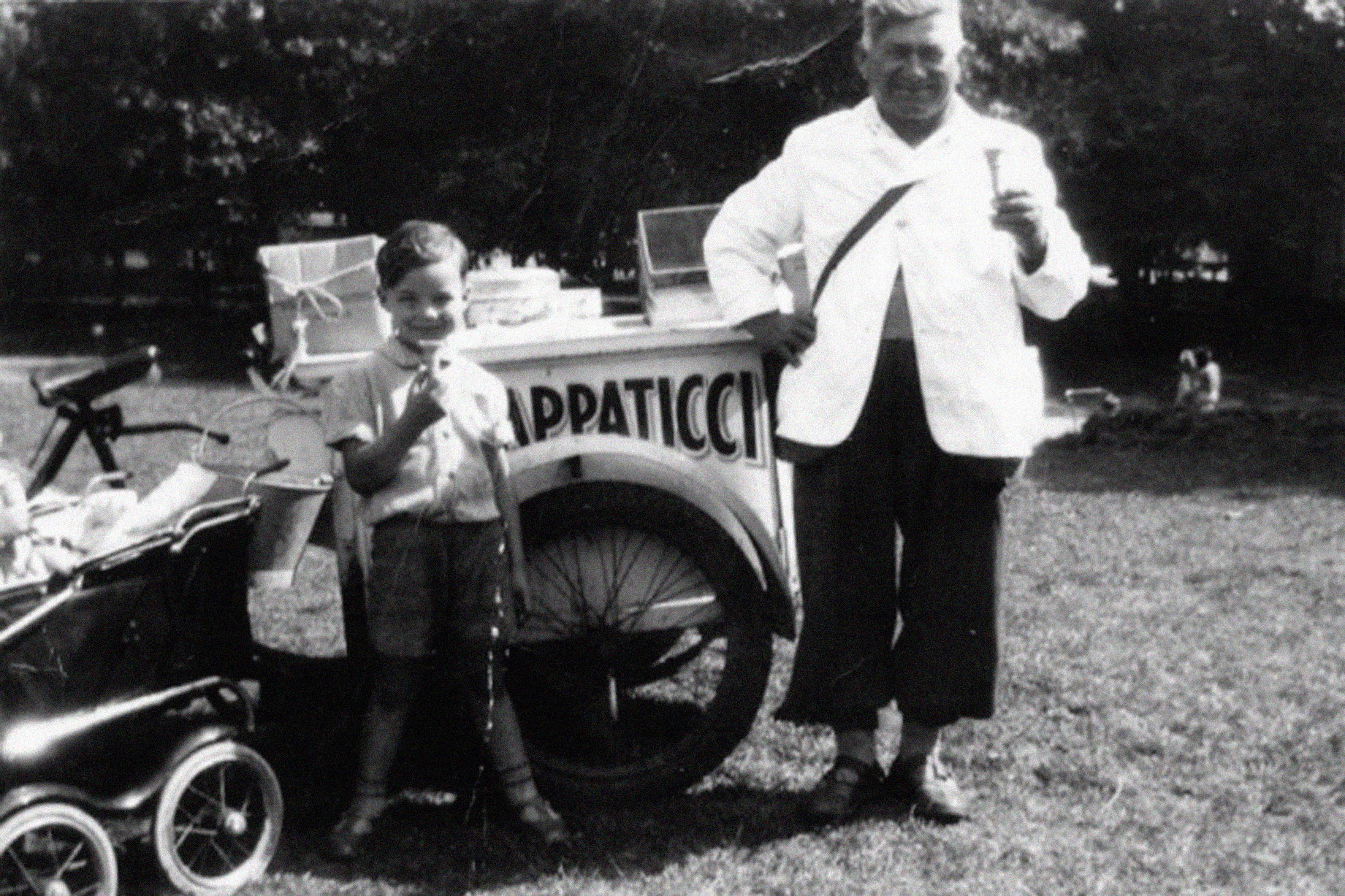 The post-war years of the 20th century were not kind to Ancoats as a neighbourhood, as mills and workshops shut and families slowly moved on to the suburbs of the city for the greener grass of pastures new. A few of the city’s ice cream makers stuck around, including Sivoris on Thomas Street and Scappattici’s on Market Street.

But effectively ‘Little Italy’ and the city’s relationship with ice cream was gone for good. Ancoats remained derelict and empty for close to 30 years, before investment, new apartments and some seriously cool neighbourhood eateries turned up in the last decade. 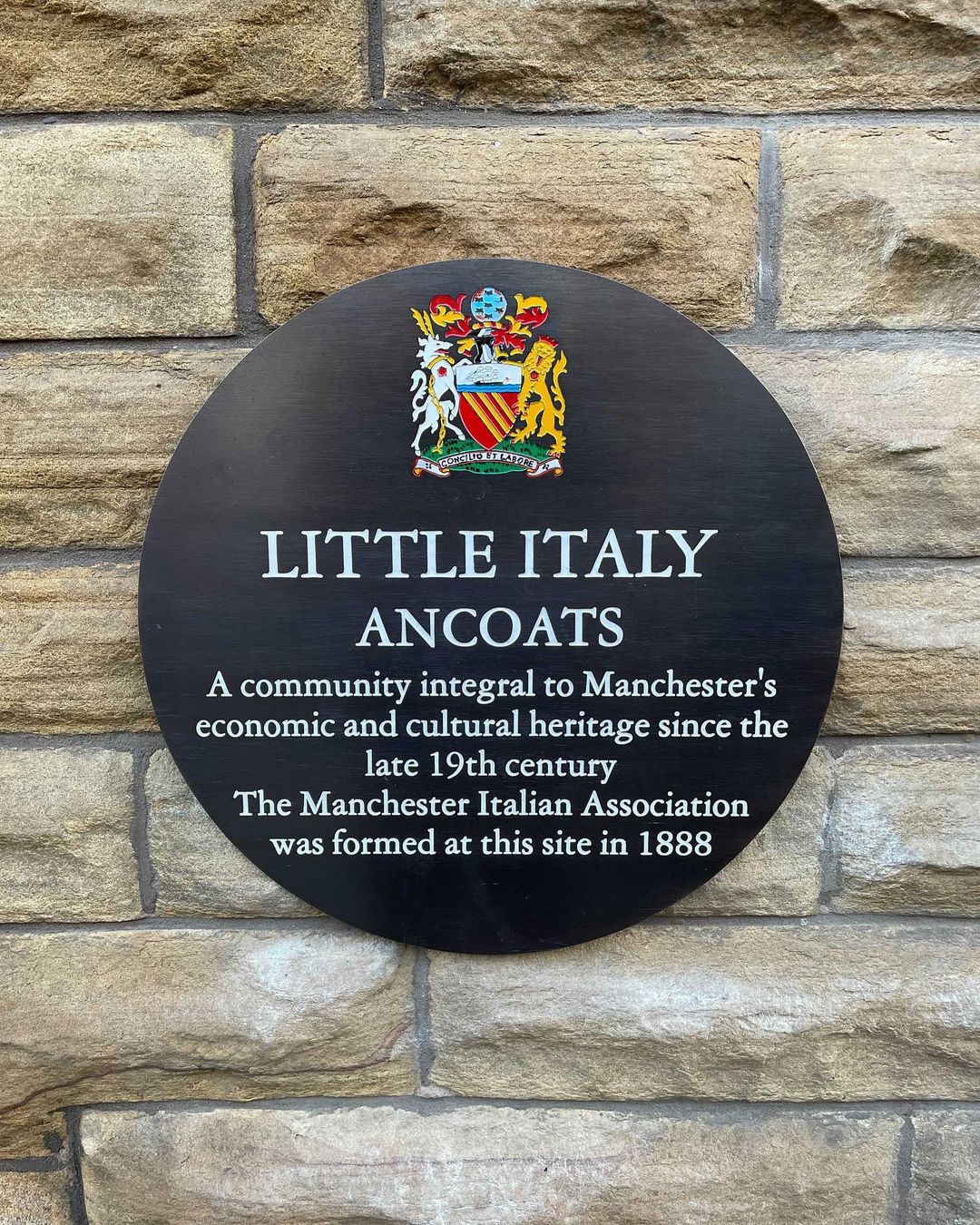 This week saw the arrival of a new plaque recognising Ancoats as Little Italy, installed on the wall of St Michael’s Church – which was the heart of the community in the area.

“A community integral to Manchester’s economic and cultural heritage since the late 19th century.”

The Burger with Beef Fat-Fried CHRISTMAS PUDDING in it!