Believe it or not, Manchester is where the first ever fish and chip shop appeared! 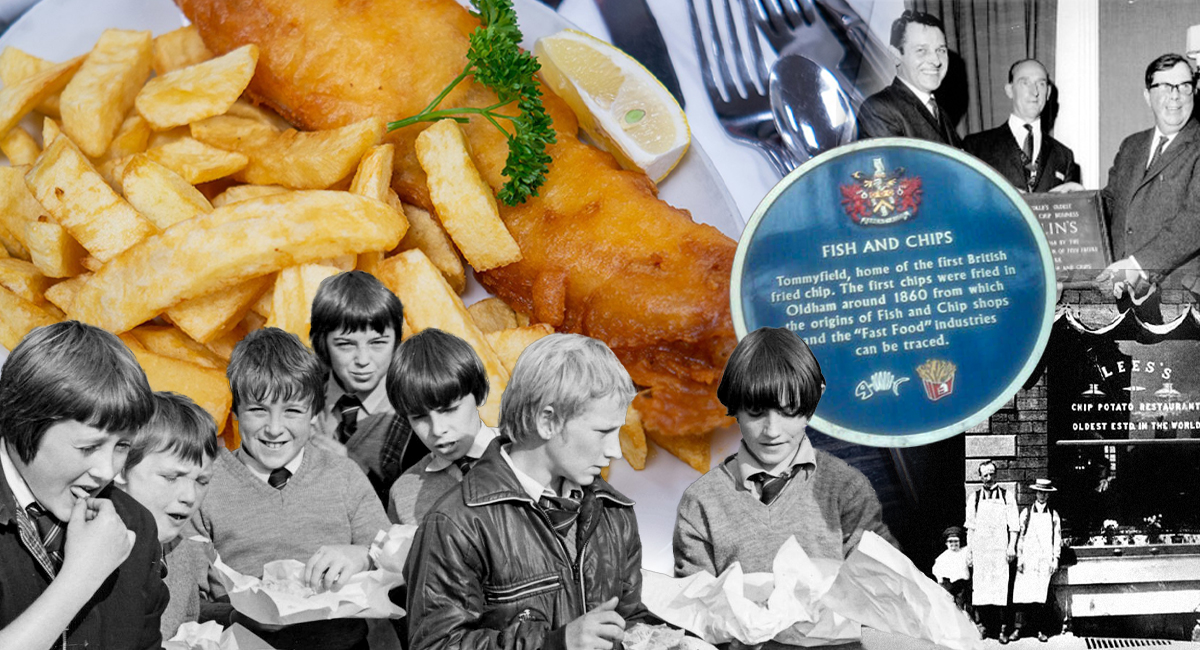 Well, according to a sign that was always up outside Lever’s Chippy in the Tommyfield Market in Oldham when I was growing up – yes – the first ever fish and chip shop was in Oldham. So that’s it. Case closed.

Okay so perhaps not. Nothing is ever as clear-cut as that, especially when it’s as important as Fish & Chips.

Once the UK’s national dish, we are still renowned all around the world for it and any visitor to the country will most likely make it their first port of call when looking for something to eat.

But where did this great dish come from? Well, like most things – it’s hard to ascertain, but there are plenty of clues out there which manage to point us in the right direction. 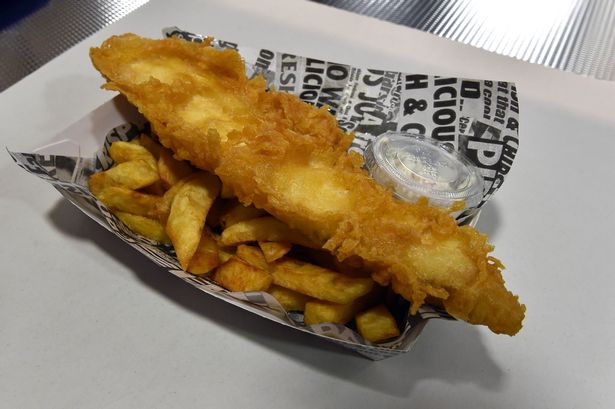 So, head down to the chippy now, get yourself a battered cod, chips and a little pot of mushy peas and prepare to be entertained…

In previous editions of this series of ‘Myths’ I’ve been approached by a particular historian about the accuracy of my data and information. So, as a rebuttal I’m going to say that in reality nobody really, actually knows what happened in the past, no matter how long you’ve been to University or how many episodes of Time Team you’ve watched.

All that we have to go off is information that was written down (can be lies) or experienced by eyewitnesses (could be wrong) – everything else is up for interpretation based on these accounts.

The reason I mention this now is because I’m bound to offend a whole swathe of people with this article – people who, perhaps because they’ve not got anything else to do, believe that fish and chips came from THEIR town or was made by THEIR relatives. 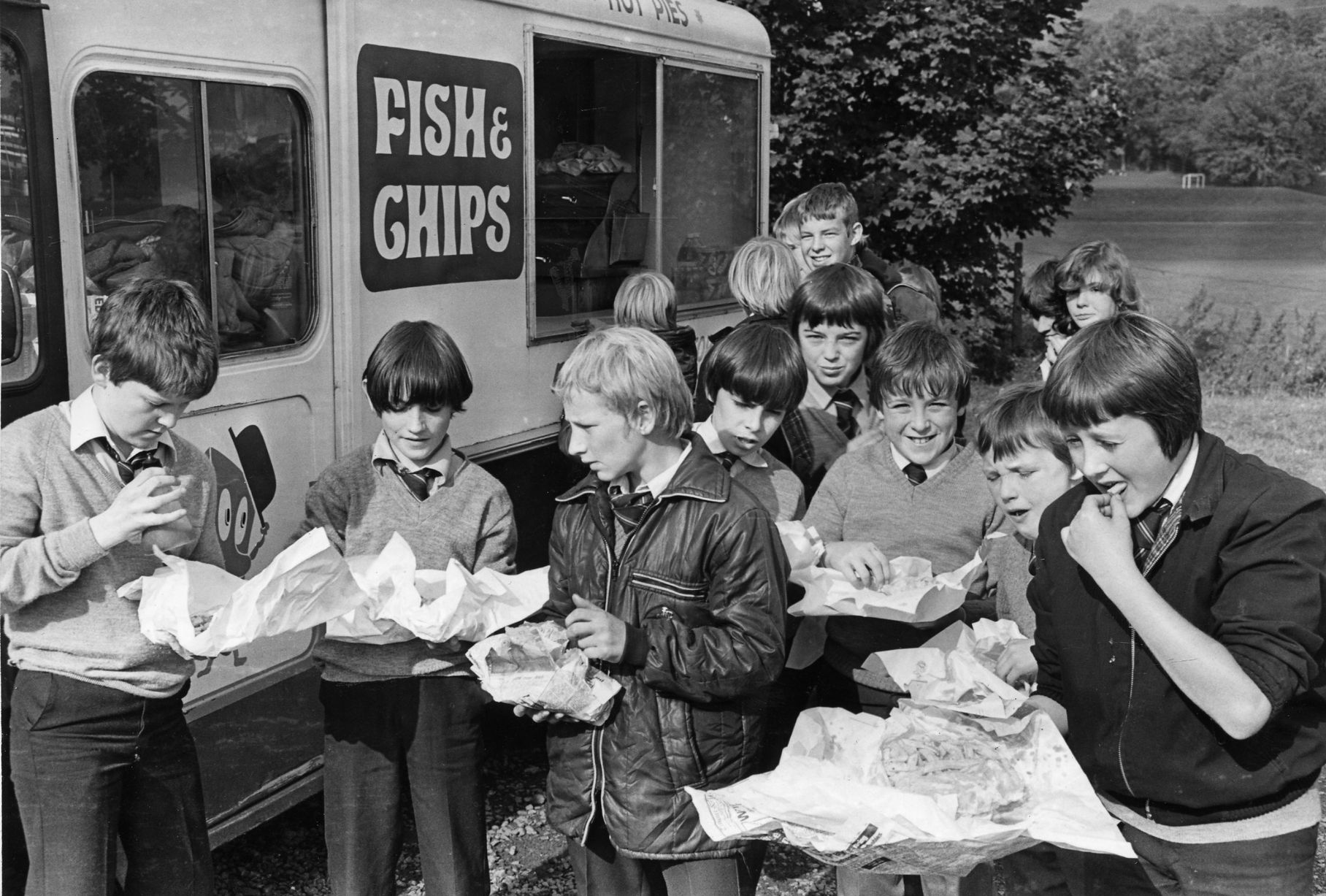 Well, let’s see who is right then shall we?

Going right back to the beginning of this whole thing, but not as far back as Sir Walter Raleigh bringing the potato back to impress Queen Elizabeth, it’s pretty much universally agreed that the idea of fried fish was introduced to us Brits by Jewish refugees from Europe.

Escaping prosecution from Portugal, Spain, Holland and Russia, the Jews fled to Britain and brought with them a whole host of culinary techniques and cuisines, many of which were quick to catch on amongst the working classes.

Traditionally fried in flour and oil on a Friday, the fish was made to be eaten cold on the Sabbath, perhaps with the coating acting as a way to keep the fish a little bit fresher. 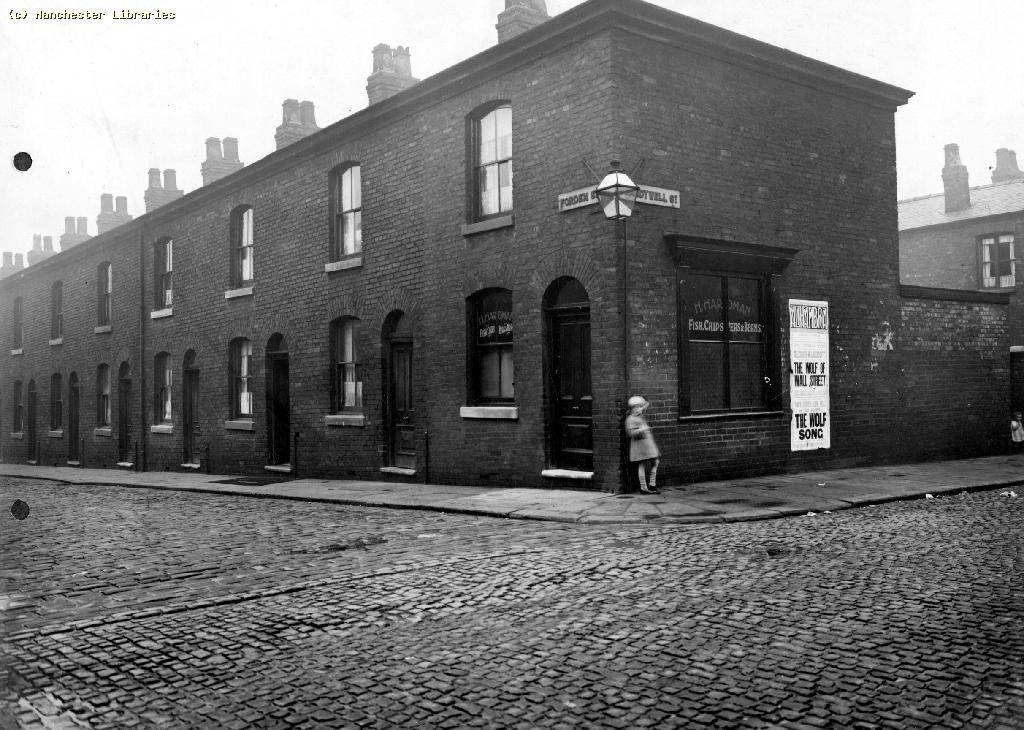 Sold by street sellers with large trays hung around their necks (much like the Choc Ice lady at the cinema), one of the earliest referrals of this comes from Charles Dickens in Oliver Twist (1839) where he references a “fried fish warehouse”, and a few years later Alexis Soyer write in his first edition of ‘A Shilling Cookery for the People‘ of “Fried fish, Jewish fashion” which was dipped in flour and water.

So fried fish was a ‘thing’ already by this point. But what about chips?

Well, from the moment they appeared and then started to be grown over here, the humble potato was cooked in a variety of creative ways. As Sam says in Lord of the Rings, you can “boil them, mash them, stick them in a stew“, (as well as roast them, fry them and mush them up into Bird’s Eye Potato Waffles) – the possibilities are almost endless. 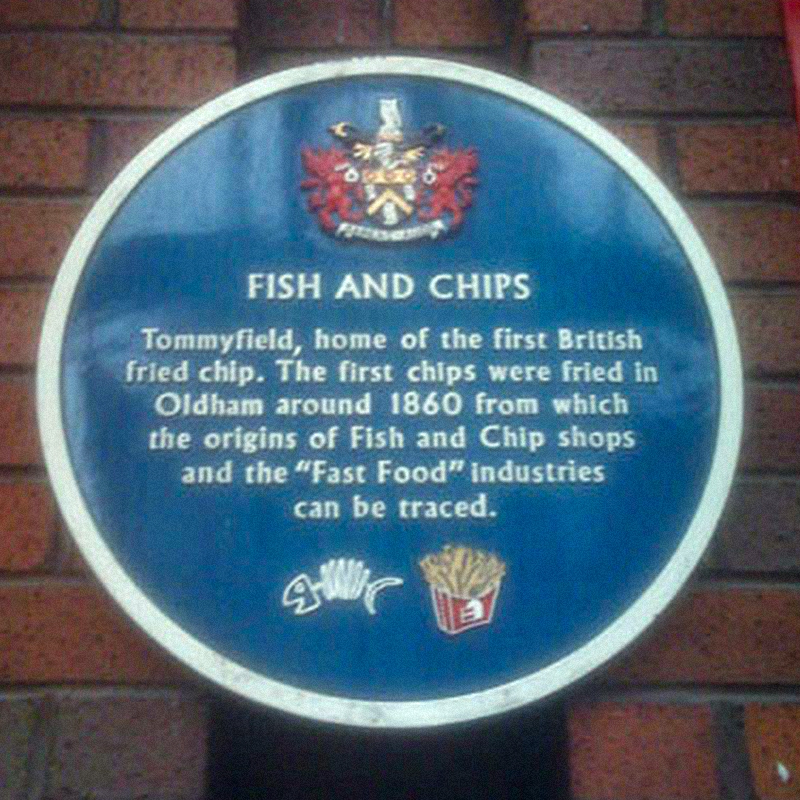 This is now where Oldham comes in and their famous Tommyfield Market. According to the blue plaque outside, this was the home of the first British fried chip – where some industrious person decided to set up shop selling them around 1860.

One year earlier though (and putting a spanner in the works) Charles Dickens (again) wrote in A Tale of Two Cities of “husky chips of potato, fried with some reluctant drops of oil.”

What this tells us is that fried potatoes were already a rather popular dish throughout the country, and it may very well be that someone opened up a chip shop before the one in Oldham, but we don’t have any evidence to say otherwise.

It’s now where things (could) get nasty.

While taking a stroll around Tommyfield Market, a Mr John Lees must have seen this ‘chip shop’ and struck upon a genius idea. Now, lightbulbs weren’t invented at that point so if you could just imagine a gas lamb miraculously lighting up above his head that would be great. 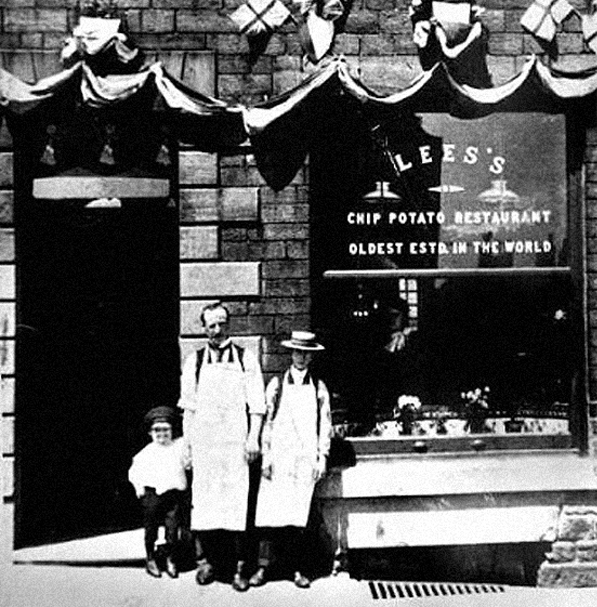 He ran off home to Mossely and built himself a wooden hut in the local market and started selling fried fish and chips – seemingly the first person in the world to ever put two-and-two together and come up with what is now one of the most famous pairings ever.

He even adorned his shop with the catchy slogan “This is the first fish and chip shop in the world” – which is probably why we are talking about him and his shop right now. Clever bastard. But in the days before WhatsApp and Good Morning Britain – how the hell did he know that he was the first? Well, obviously, he didn’t.

Around the same time a Jewish immigrant called Joseph Malin opened up his own fish and chip shop in Cleveland Street in London – kick-starting an argument which still rages today.

Whichever one came first, I find it highly unlikely that we will ever know – unless someone invents a time machine at some point in the future, which if time travel is possible has already actually happened and there is no distinction between the past, present and future and everything has already happened and been proven.

Forgetting about time travel, which Einstein was about to prove impossible about 75 years after the whole fish and chips debacle, I’ve decided to put the whole thing to bed and make a final decision on this one. 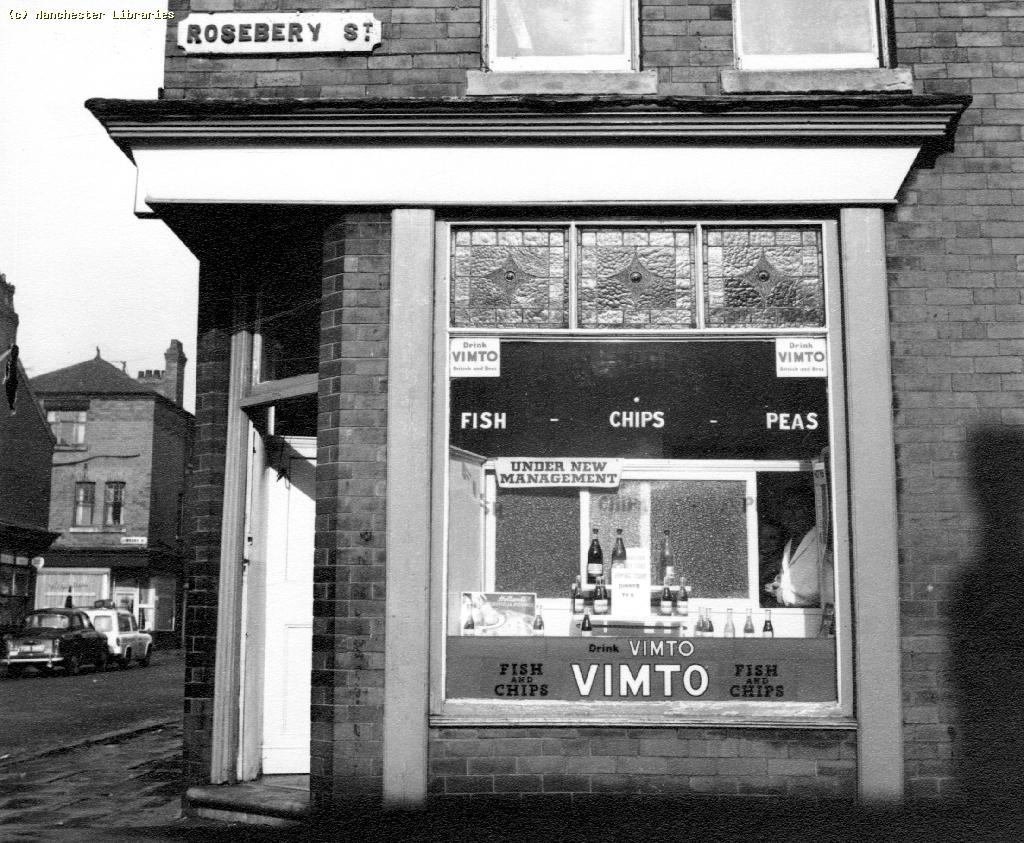 And I must assure you – it is in NO WAY biased. The fact that I’m from Oldham has nothing to do with it I promise.

The winner of the first Fish & Chip Shop EVER goes to… Mr John Lees and his shop in Mossley. Well done matey. Joseph Malin, sorry – maybe next time.

So, there we have it – conclusive evidence and decision making in action there. Yes indeed, Manchester is the home of Fish & Chips. Get it added to our long list of achievements.

If this has got you salivating like a rabid dog thinking of going to the chippy, here’s our list of our favourite chippies in the area – be sure to add your own personal favourites in the comments too!