Following the success of their previous collab on the Nike Dunk low in 2017, streetwear community group “The Basement” (which started on Facebook), have again teamed up with Nike to create another collection that’s sure to create big queues.

The second iteration of the BSMNT Air Max 90 captures Manchester’s fearlessness – a defiant city bonded by the challenges it must overcome. Directed by @walidlabri #BasementApproved

Said to ‘Capture Manchester’s fearlessness’ they’re wrapped in 2 types of water-resistant Cordura and offers nubuck panelling to contrast. The shoe is mostly tonal black throughout with accents of volt. The quarter panel running around the shoe is made from black 3M which is a nod to the roads and workers that bring us home, plus there’s a jewel swoosh that finishes off this stealthy Air max 90.

Another nice feature is on the soles which has another nod to the previous collaboration from the pair that came about from a series of films titled “Real People Do Real Things,” which highlights nine members of The Basement.

These iconic trainers drop on Saturday 12th October, and you can expect big lines at Manchester’s Size? and Selfridges stores… but if you don’t fancy that you can always try your look on Nike’s SNEAKRS app at 8am.

Notify me on SNEAKRS APP 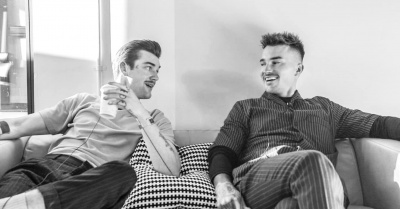 NotJust a barbers. The two Manchester men who have made hair into…