A community project that is growing through the back alleys of Gorse Hill, and it all started with a one-wheeled motorbike...

It’s bin day today and I’ve had an absolute nightmare. I forgot to wheel my bin 2 metres to the end of the alley and they’ve not emptied it. Looks like I’m going to be using the bins around the back of ALDI for the next few couple of weeks instead.

It’s understandable though, as the alleyway round the back of my house is absolutely disgusting; full of manky bins, weeds, the odd discarded bit of furniture and what I can only describe as gallons of ‘glunge’ clogging up the drains. I hate going down there.

It was the same for Elena Greenall, a Gorse Hill resident whose alley behind her house was frequently being used by fly tippers – leaving the odd chair, mattress and fridge there – until, the straw that broke the camel’s back, some sod decided to leave a one-wheeled motorbike there. Elena decided – enough was enough.

“It was during lockdown and I’d look out of my window in the morning and it’s like, oh, what’s been left today. There were wardrobes, dining chairs – you name it, it’s been there. Mattresses, office tables, even to the point we had a motorbike!

“So one day, I just said – I’ve had enough and I got a big linen basket, washing basket, something big, cheap and cheerful and I got some flowers from my garden and I put it in the corner, and hoped it would deter people a bit.”

And with that one simple act, Elena had inadvertently awakened a slumbering beast – unravelling a community that was sick and tired of the dirt, grime and filth – and were determined to take matters into their own hands to do something about it. 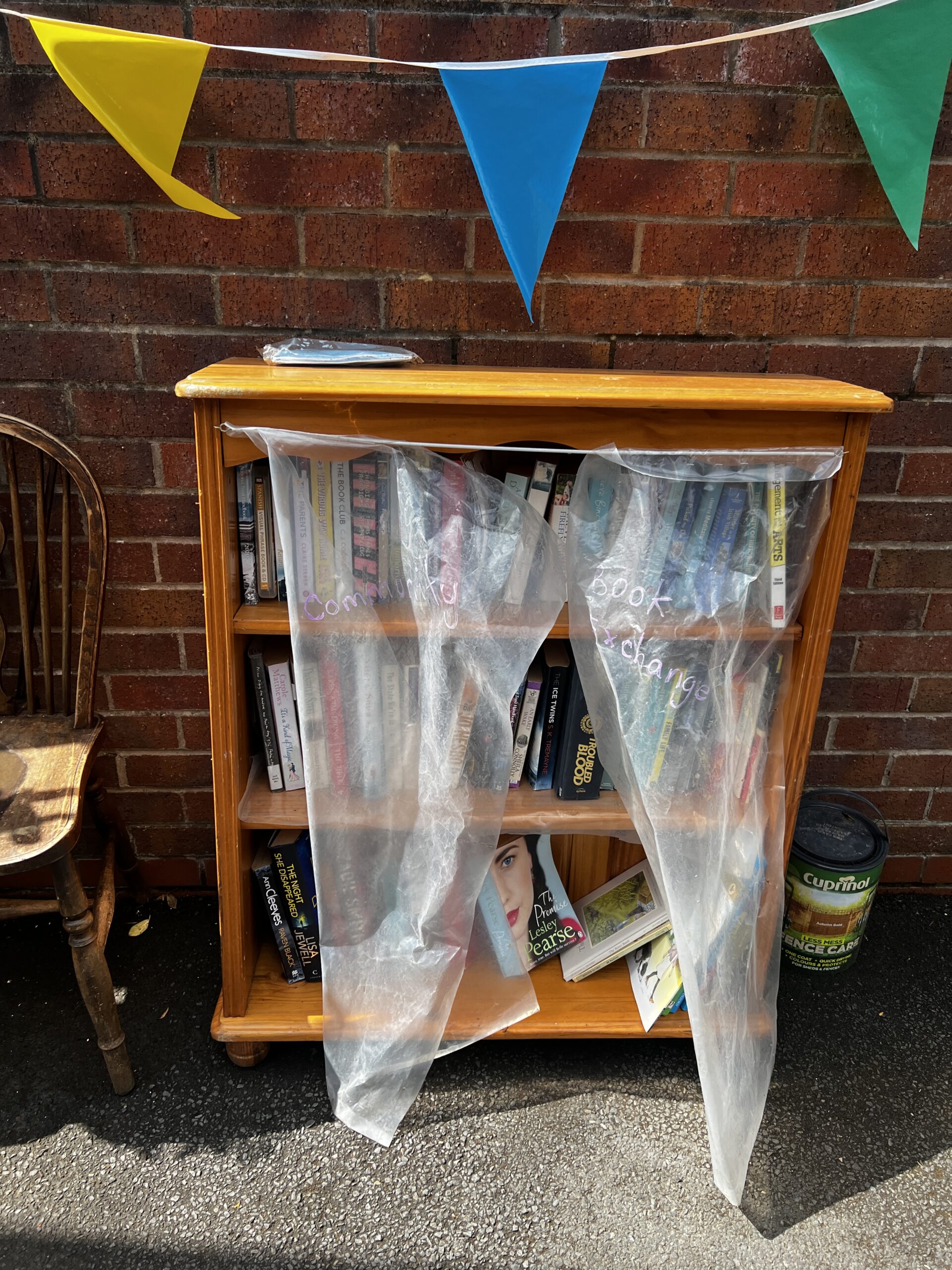 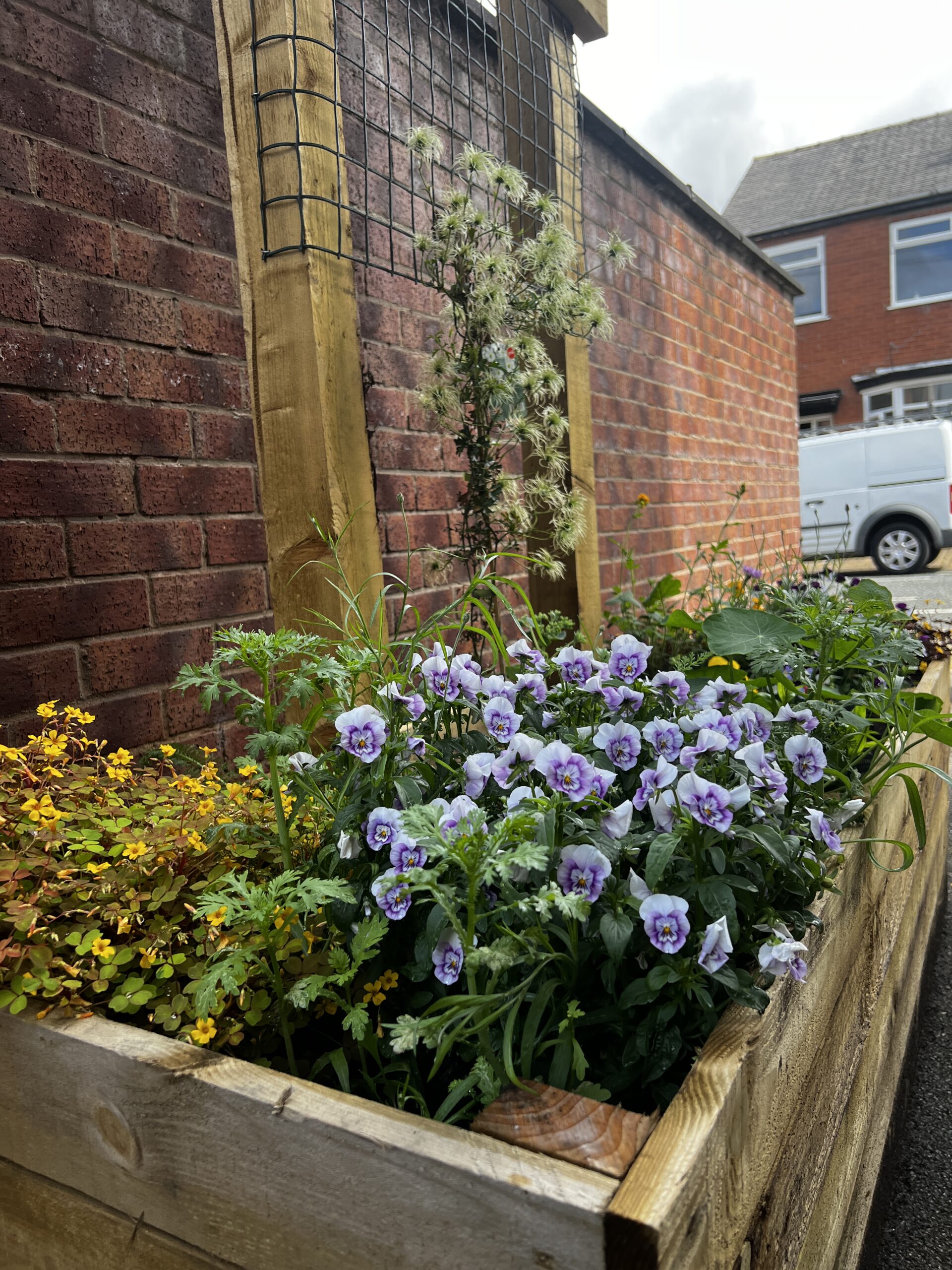 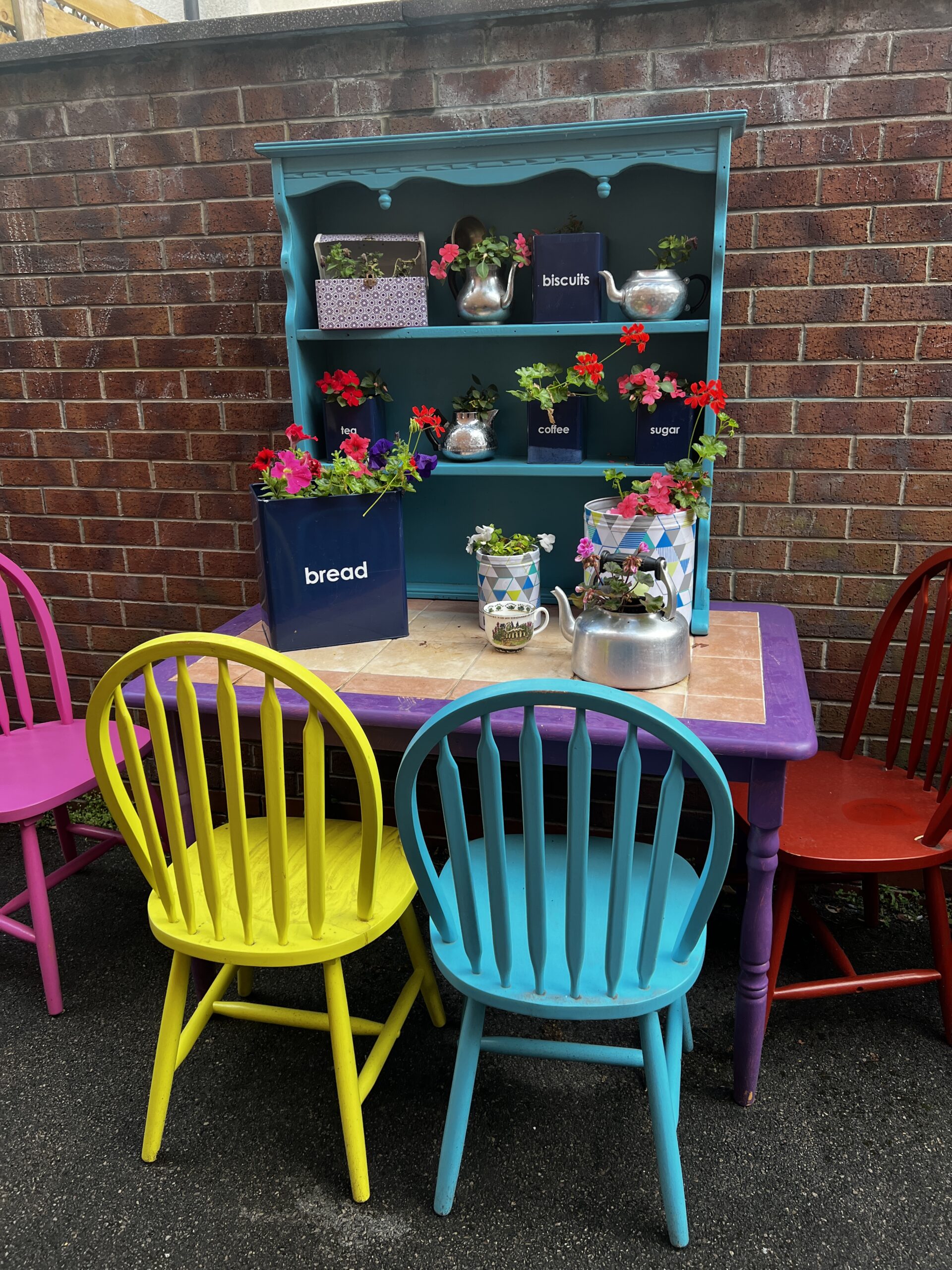 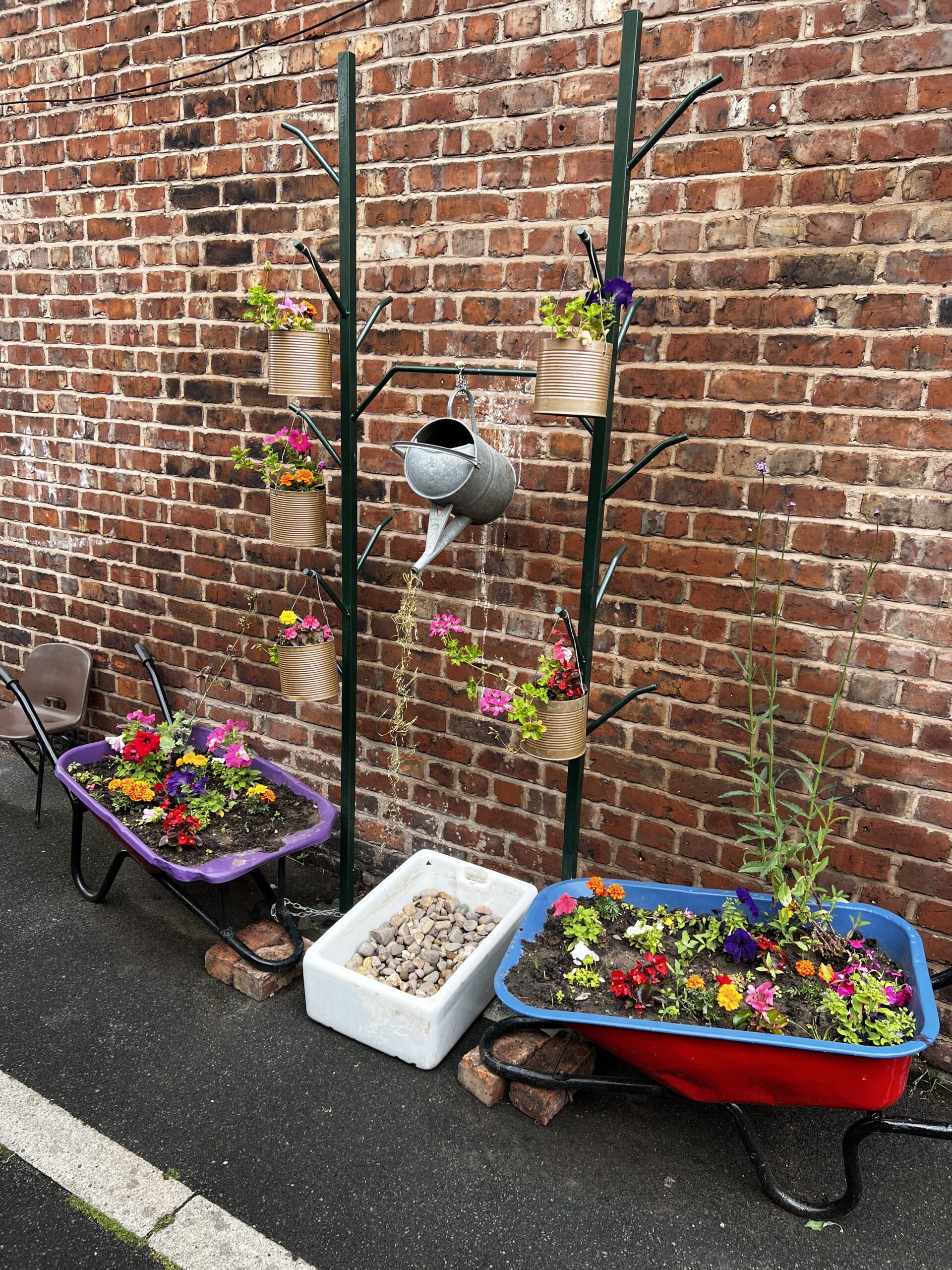 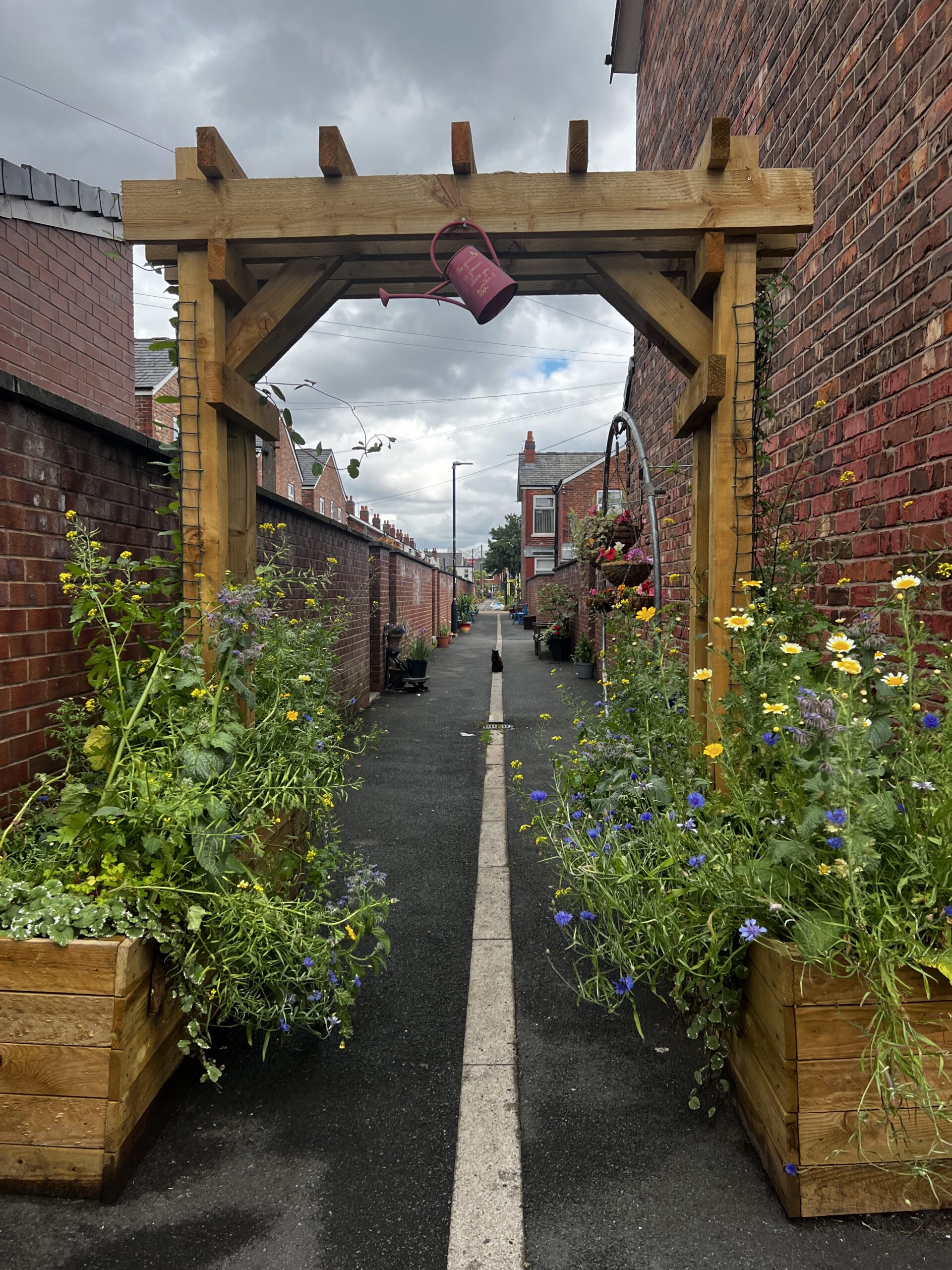 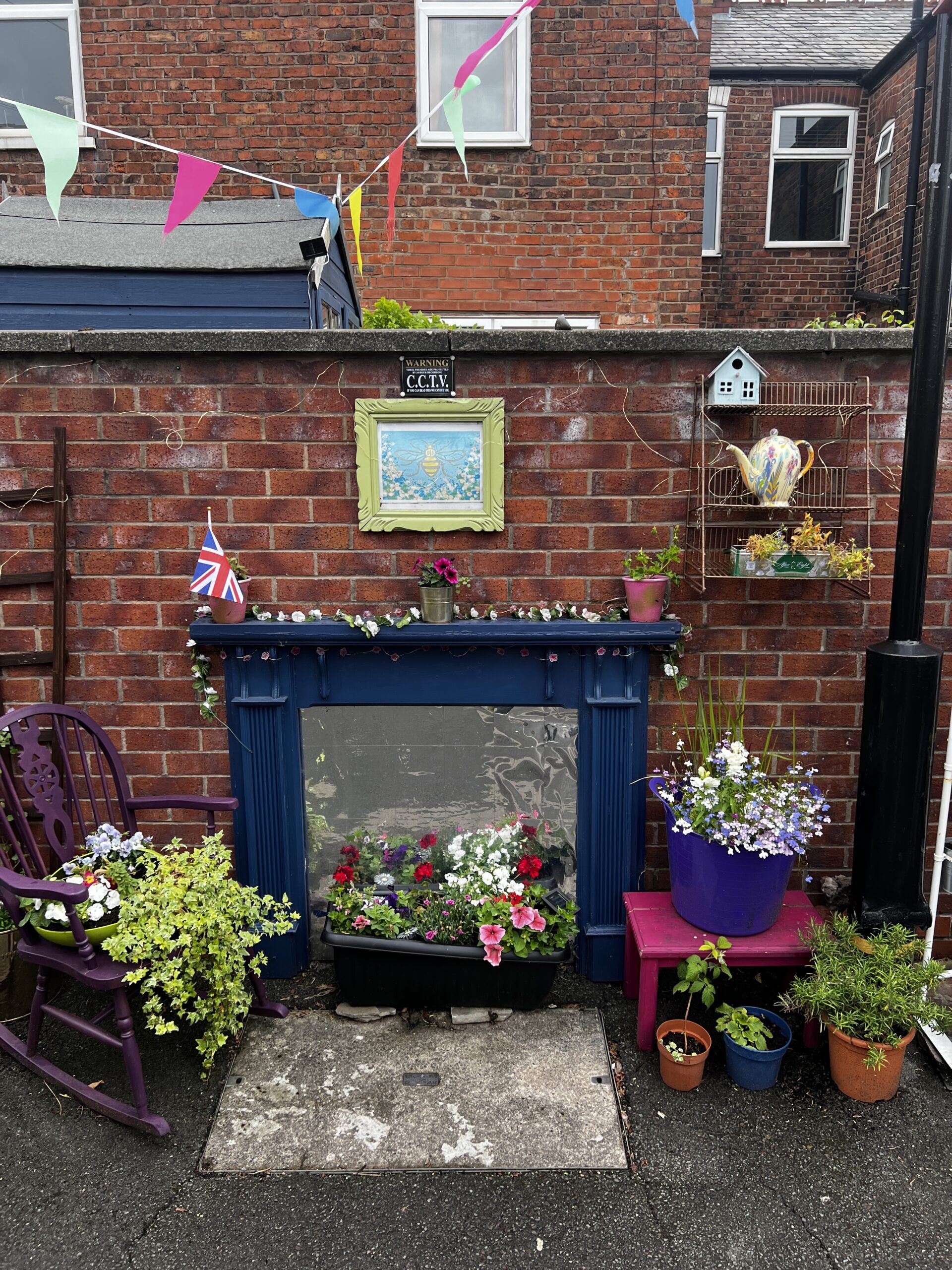 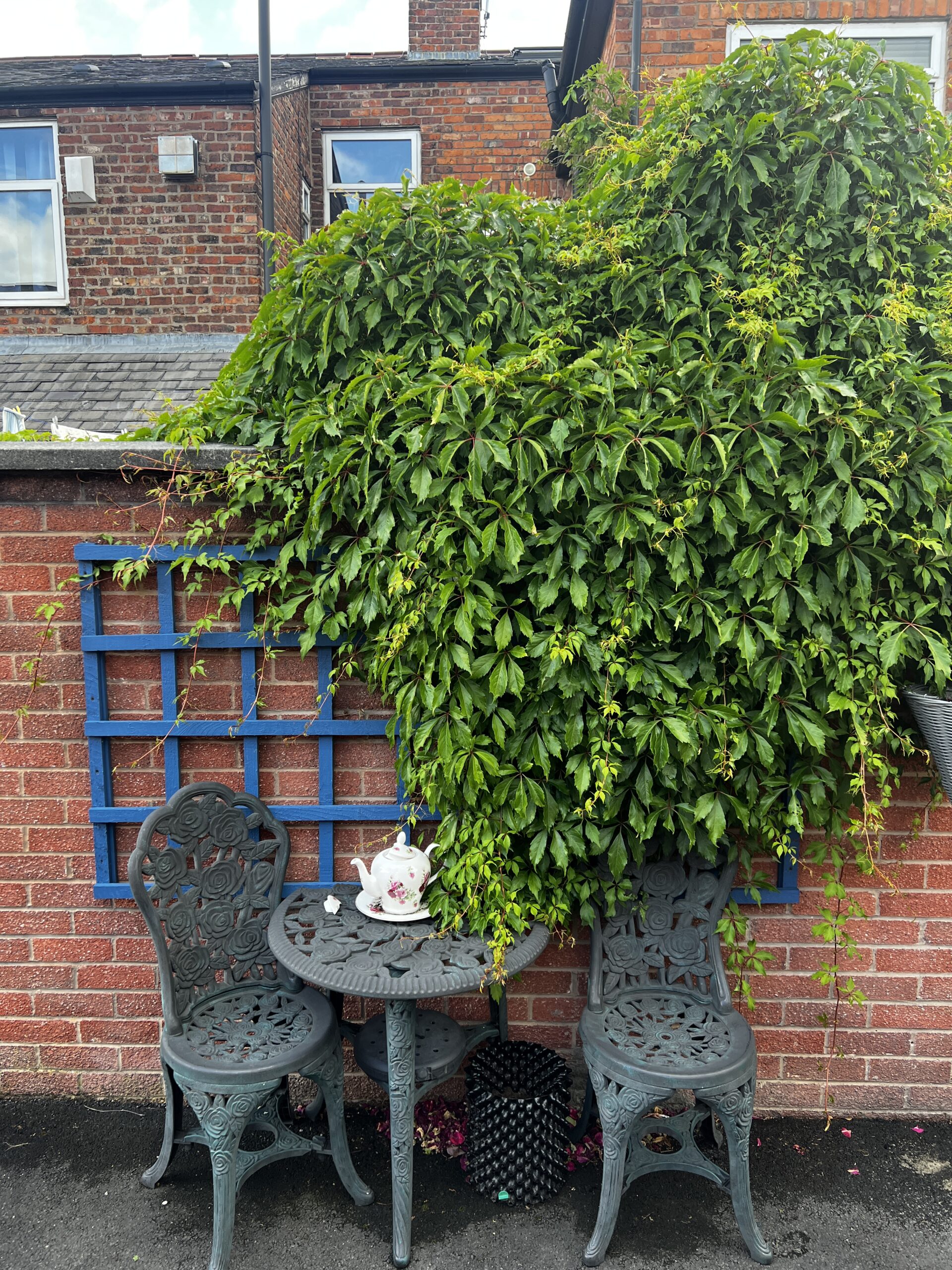 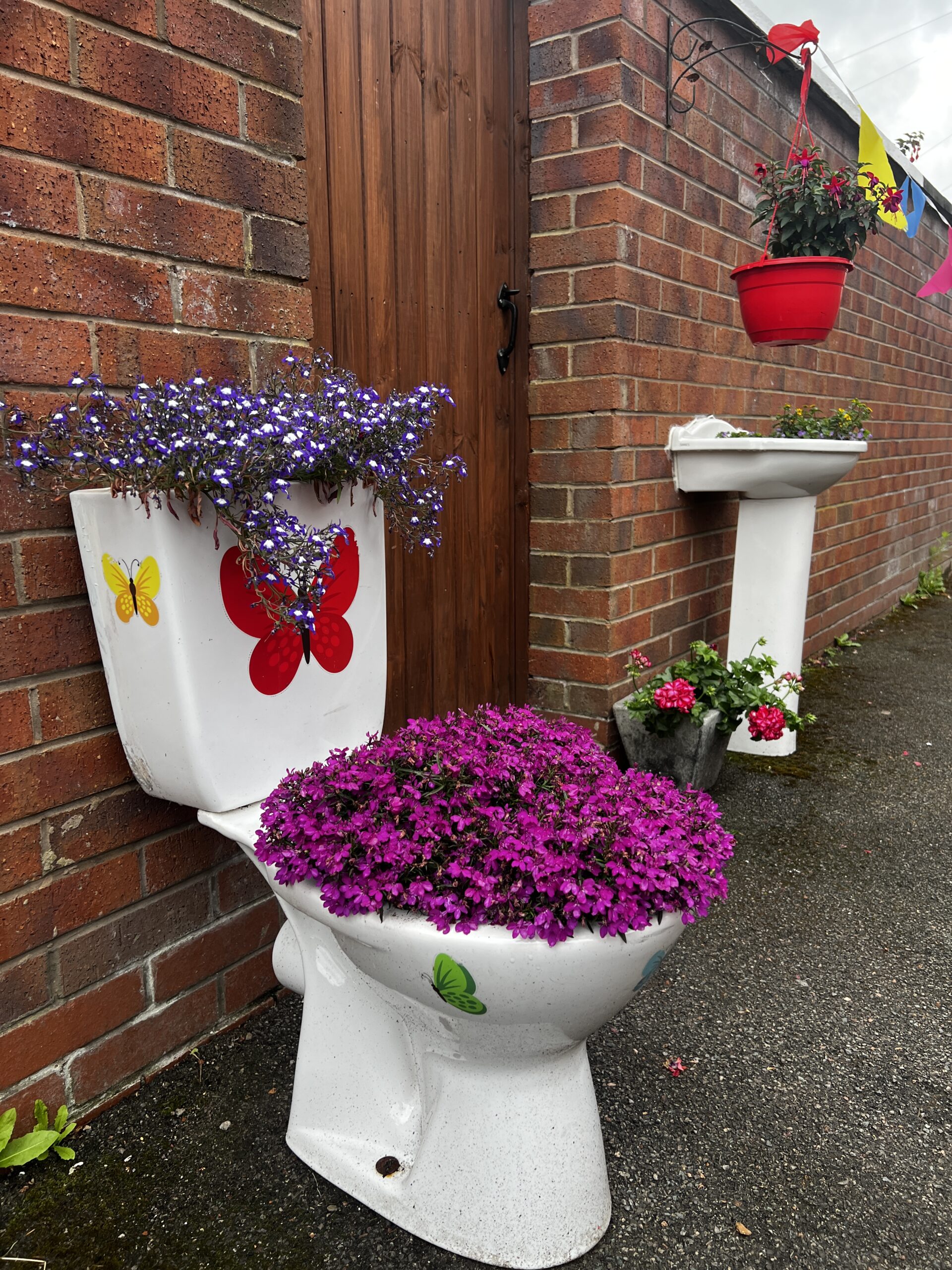 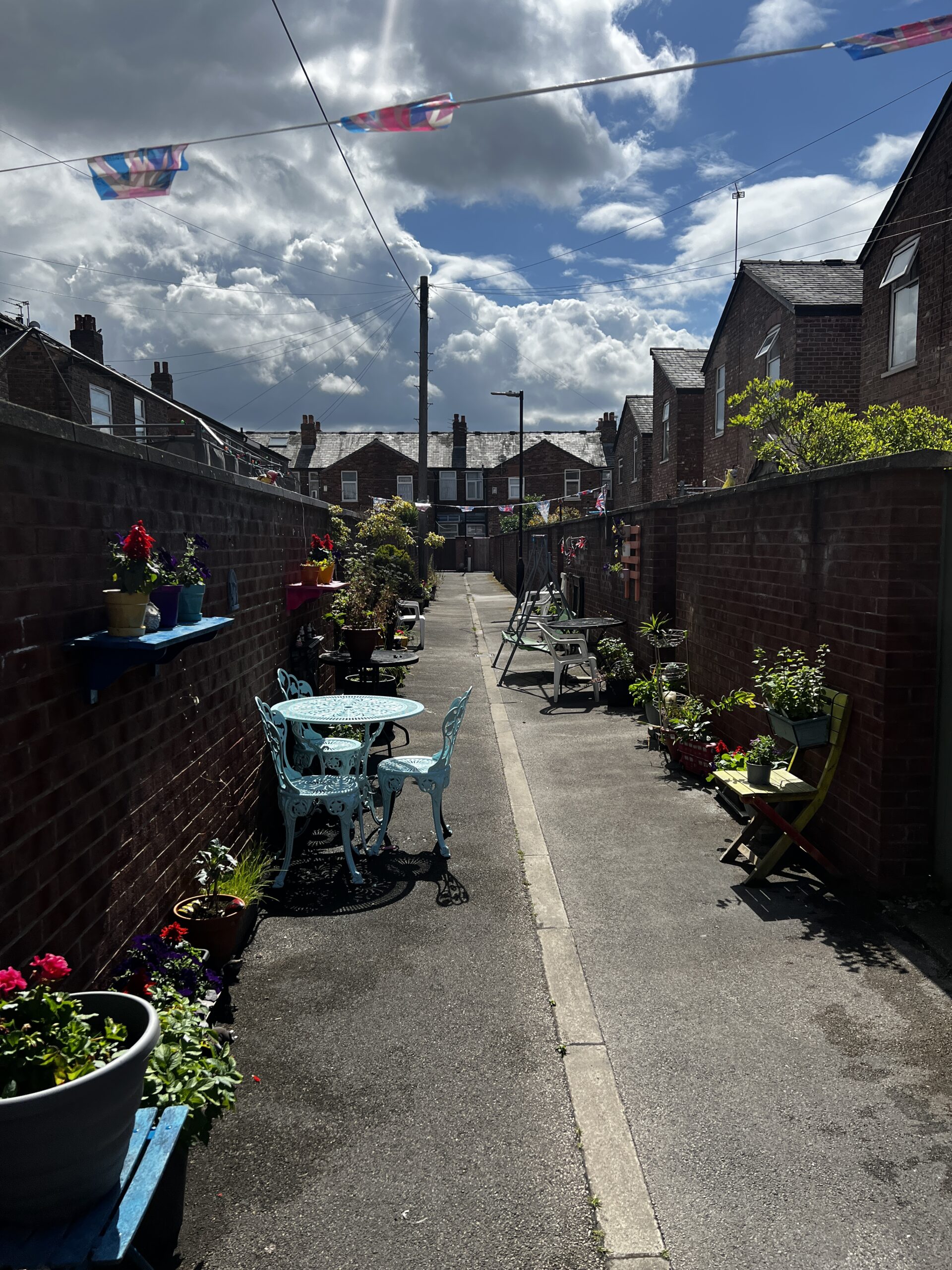 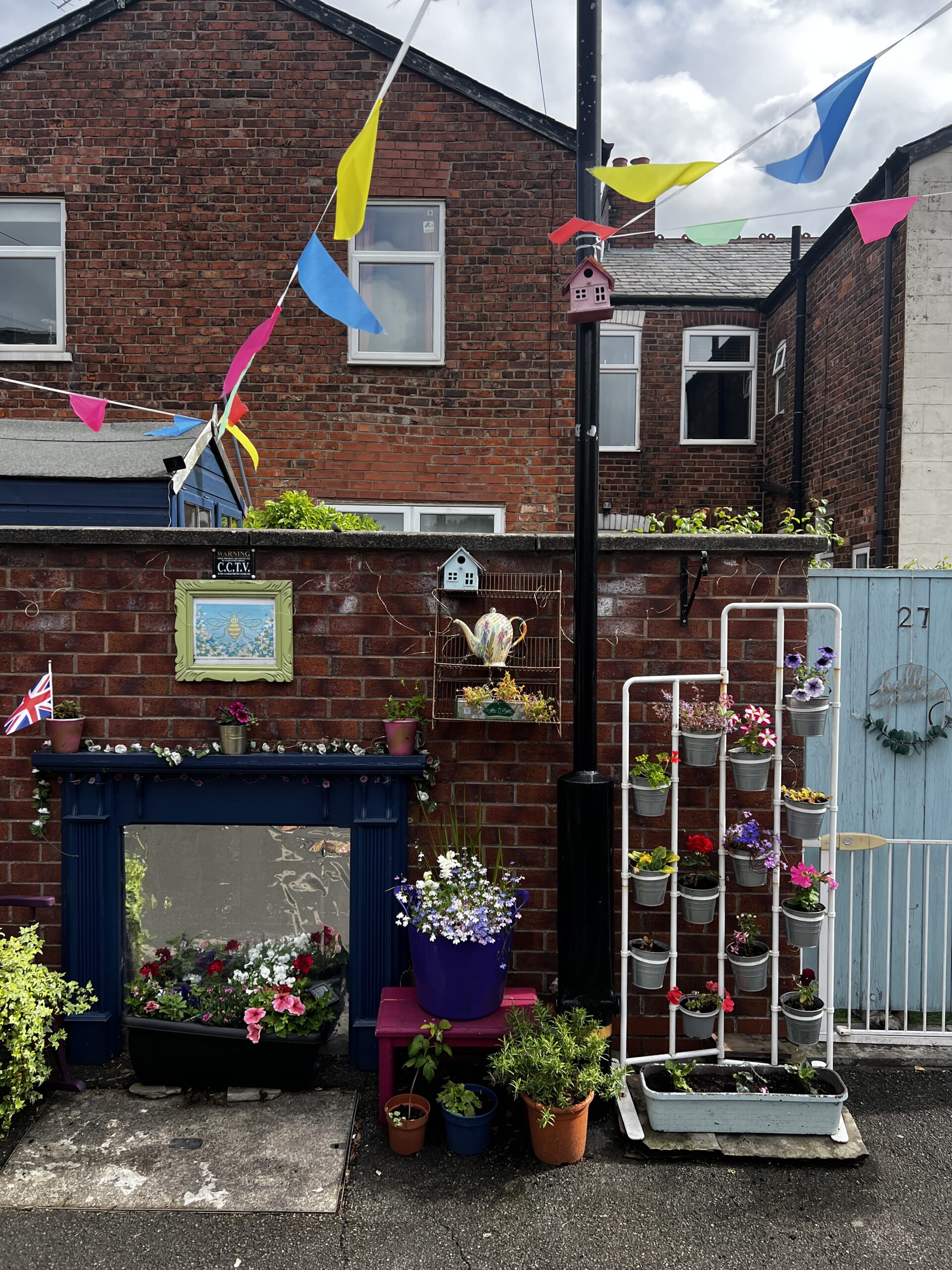 From there, Elena started to clean up and transform her small patch of alleyway outside her house – de-weeding, putting up planters, hanging baskets and making it look presentable.

“Once I’d finished, one of the ladies in the street said, “oh, the council have only done up to the lampost” – and I told her it was me and that I’m not doing any more – I’m hoping people are going to join in.

“So she came out and started clearing up and then there’s another lady and we gathered everyone together and became a team, and it’s just gone from strength to strength.

“From there, we’ve been putting pictures up on the local (Facebook) group and others started saying that they wish that they could do that – so I set up Gorse Hill Amazing Alleys – to clear up, tidy and create green spaces – and it’s spreading now too!”

Regularly communicating through a WhatsApp group, the community has managed to gather up all manner of knick-knacks and pieces of furniture, painting them and filling them with flowers and plants – completely transforming the filthy backstreet into a green oasis.

One of the residents then applied for a grant through Groundwork Greater Manchester, winning £6,000 to transform other alleyways in the area – in particular one that runs alongside Gorse Hill Primary School – a project that is coming along in leaps and bounds.

The ongoing project is also working closely with the school to help teach the children all about growing produce, green spaces, wildlife and more. The whole section is dotted with bird feeders, bird houses and the like – all made by the kids in class.

'The Lady of the Gorse'

When we popped down the team had just finished one of the installations on the new alleyway – The Lady of the Gorse – a gifted mannequin in an old bath, “surrounded in nature“. They’d finally finished it after a rather major setback, someone nicked their first bath!

“We’ve had a few mishaps with things going missing but we’re not being deterred, we’re evolving from it and moving on.

“The upside is that the community comes together, nobody is happy with it and people are wanting to donate things to the project as a result. Solidarity wins through.”

Elena and the team were keen to stress just how much people in the community have risen to the challenge, often faced with rather difficult situations. As the project has grown organically, there’s still an awful lot of work to be done in most of the other alleys in Gorse Hill, but there’s still a dedicated set of people persevering with it.

Just as we were getting ready to leave, one of the residents near Elena’s house came down to chat with us and he remarked on the hugely inspiring project that the community has undertaken, and that the very best thing to come out of it is in people’s mental health.

“Instead of it looking filthy and dirty, now when you walk past or look out of your window it looks fantastic, and that really cheers you up. This thing is amazing for people’s mental health, and, for me, that’s been the biggest thing really.”

I must say, when I saw the space and heard about what Elena and the team are doing, it did inspire me to finally sort out the manky alleyway around the back of my house too. A lick of paint, some nice hanging baskets and I think I’ll grow some herbs. Oh, and probably finally speak to my neighbours.

You can find out more about the Gorse Hill Amazing Alleys Project by following them on their Facebook page here: