Dungeons & Flagons is packed every single night - and a LOT of fun... 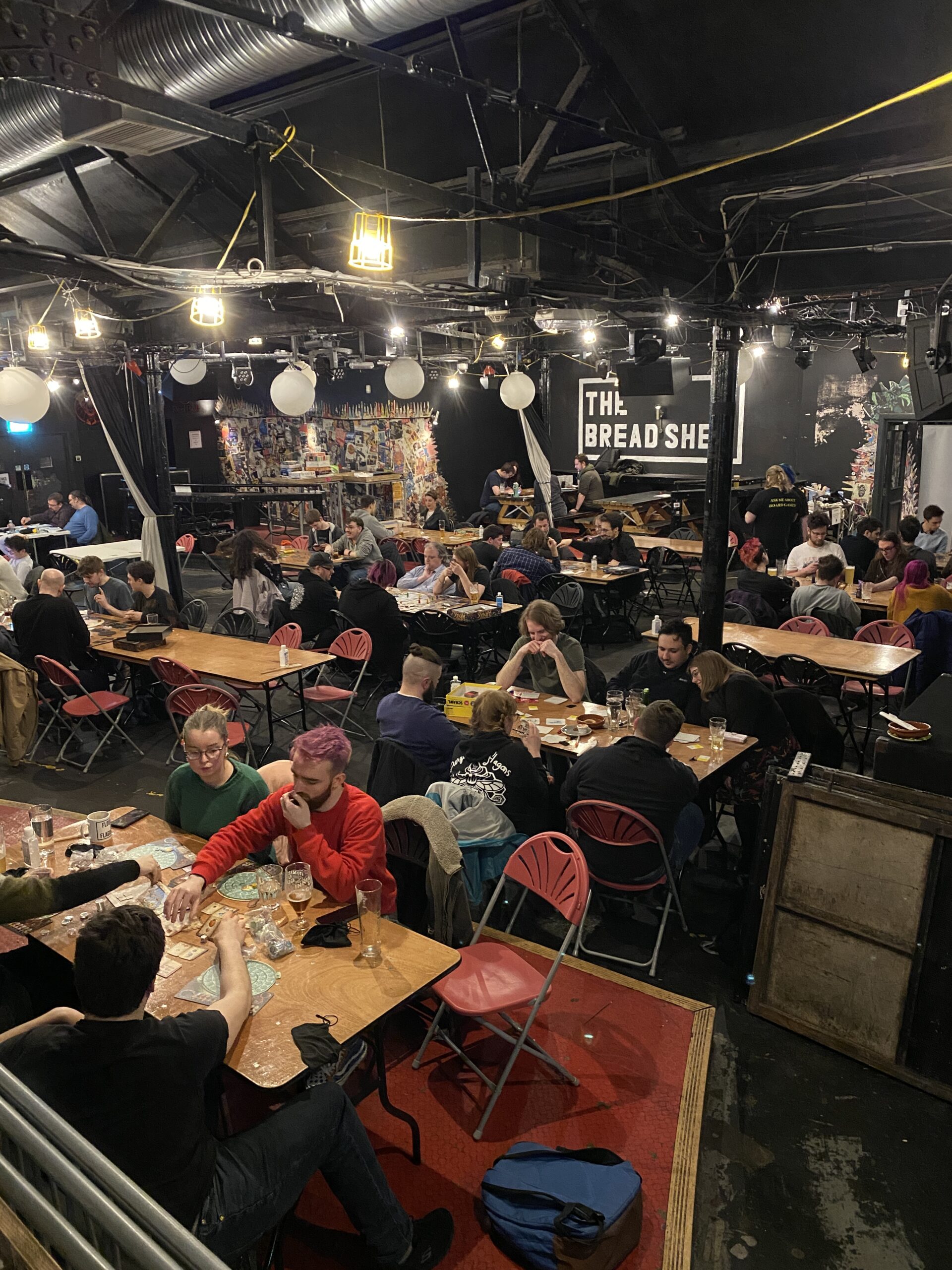 Back when I was a kid, in the early 90s, board games usually meant a frenzied 3 minutes’ bashing on Hungry Hippos followed by setting up Mouse Trap simply to set the whole thing off, launch the man into the bathtub and then get bored and go play curby outside.

Not any more though. The world of board games has become massive; a true worldwide phenomenon – with literally hundreds of new games getting released year-on-year – a market worth £8.8 billion which is expected to increase by another £3.5 billion over the next 5 years. 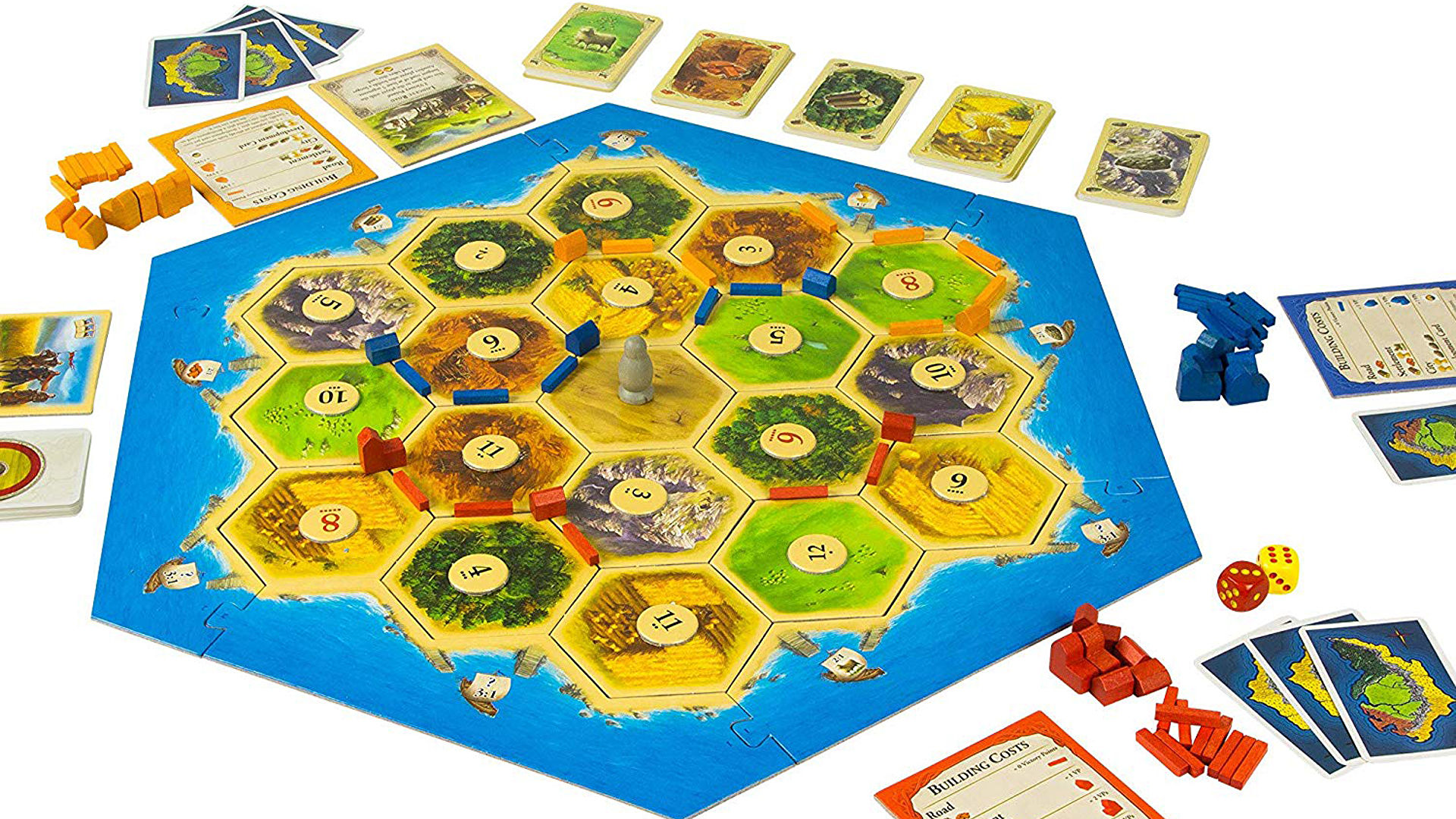 Now considered to be ‘GATEWAY GAMES’, they ushered in a period of unchallenged creativity and popularity that continues to this day.

It’s hard to pinpoint exactly why the boom is happening, with many looking at people’s desire to move away from screens, and a want to take part in something that involves a greater degree of ACTUAL physical social interaction – the antithesis of social media and online video gaming – which have also been tainted in recent years by online trolls and destructive communities. 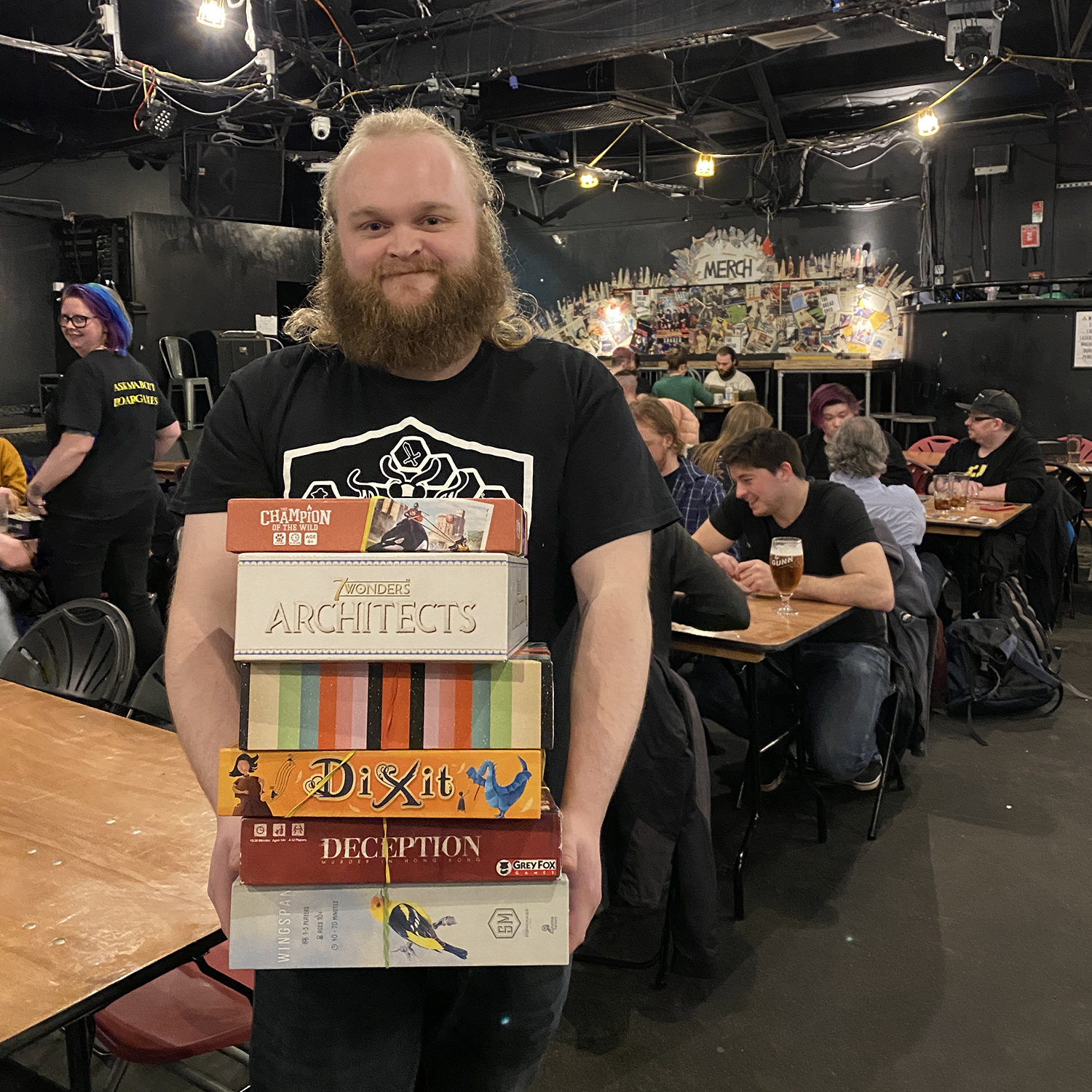 I think perhaps as social media has permeated our lives more and more over the years, along with all of the negative aspects that come with it – people are looking for an activity that’s simpler and more ‘human’ – chatting and interacting with someone sat opposite you and all of the pleasures that affords.

One person who is riding this wave in popularity is James Oxley, who this year took a Risk (yeah!) and quit his full time job to run ‘Dungeons & Flagons’ in venues across the city; a pop-up event where you can play from a selection of over 200+ board games, get involved in some role playing games and enjoy the simple pleasures of having a chat down the pub. 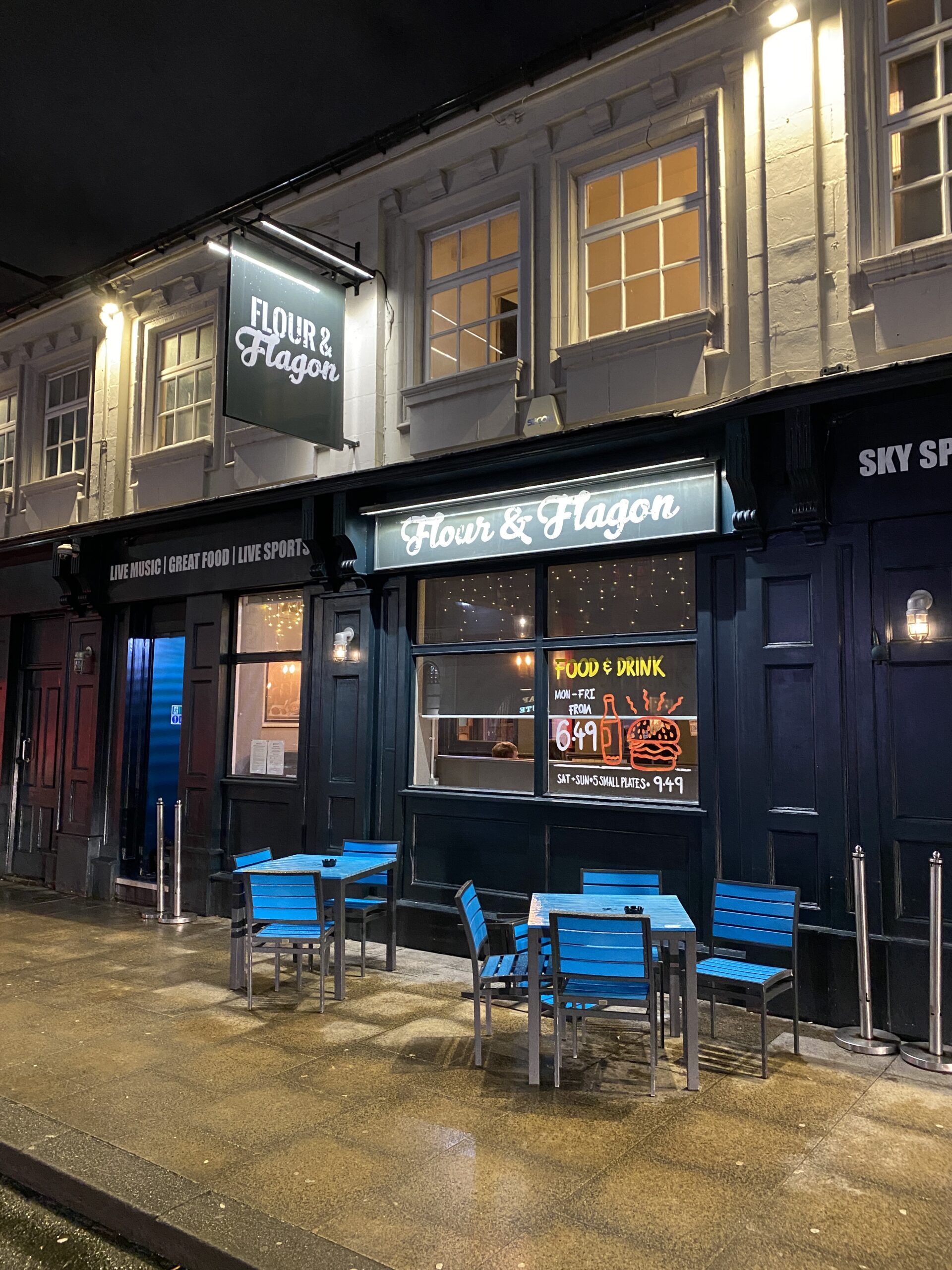 James studied Events Management at MMU and when he graduated he convinced the bosses at The Flour & Flagon just off Oxford Road to allow him to combine his love of board games with a night – inviting the people of Manchester down to play and learn new games, and things got very popular very quickly indeed.

He now runs Dungeons & Flagons at four venues across the city every single week, and every one is packed out with a ragtag selection of people, from serious role players and their years-long Dungeons & Dragons campaigns, to newbies looking to pique their curiosity.

With the games there really is something for everyone, and the sheer variety is staggering. 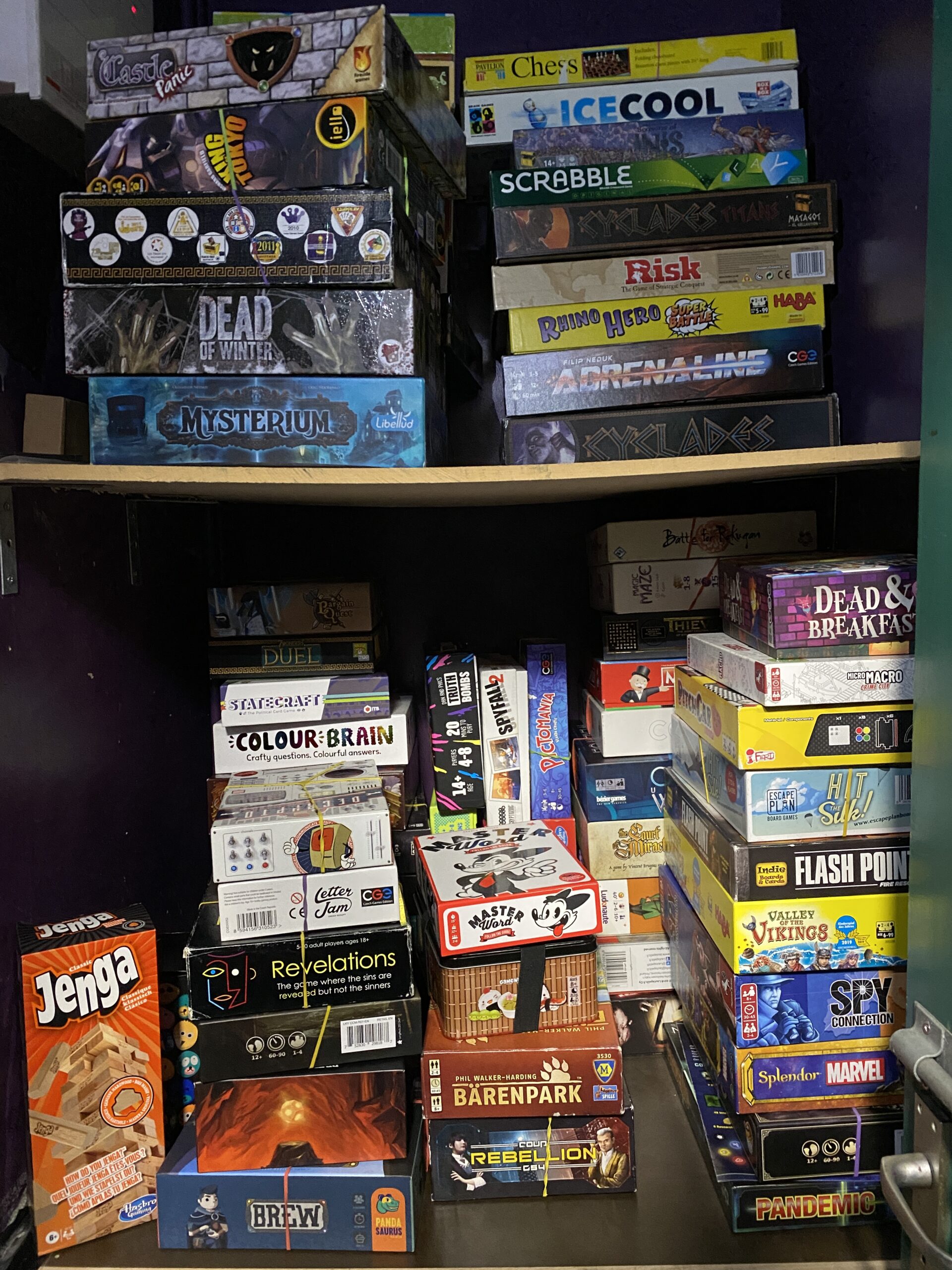 The biggest difference between new board games and what you’re probably used to is the new and engaging mechanics that they employ – eradicating any elements of luck, and making them much more rewardable to play.

Take Ticket to Ride for example. There’s no dice to roll, and you must employ a range of strategies in order to best your opponents. It’s perfect for beginners to the world of board games because it’s very simple mechanics are easy to pick up but once you start playing it – it becomes increasingly more complex with the strategies and moves that you make. 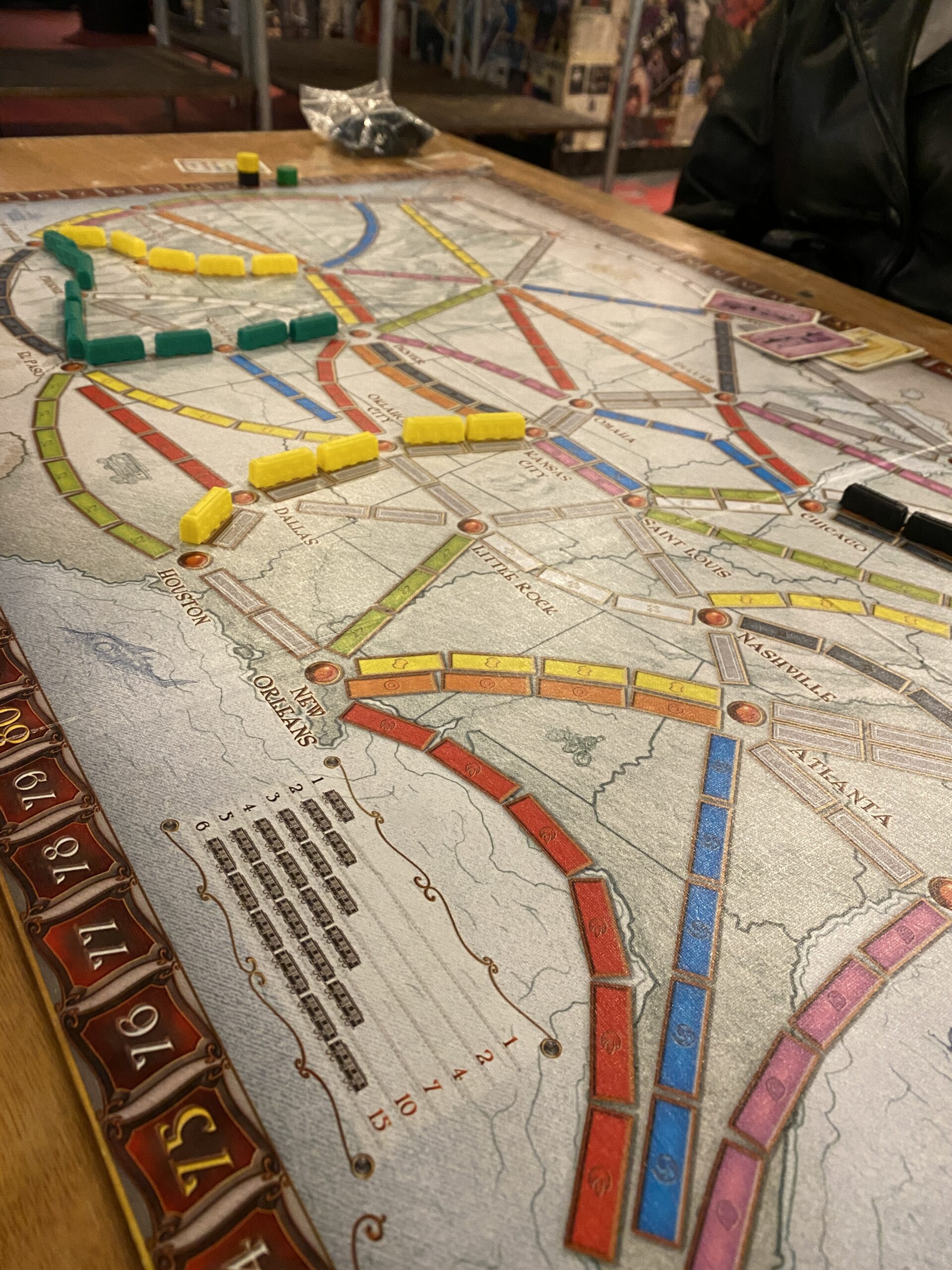 Then there’s the more unusual games, such as The Champion of the Wild, a fantastic card game where players need to discuss and vote on whose wild animal is best to compete in a series of activities (such as the 100m sprint, ballroom dancing and hide-and-seek). Much like the massively popular Cards Against Humanity, it promotes discussion, gets people talking and is a bloody lot of fun to get into.

The variety and variation is enormous, which is why James is always walking around with his hosts to lend a hand with any questions, utilising his almost encyclopaedic knowledge of the mechanics and rules of most games. 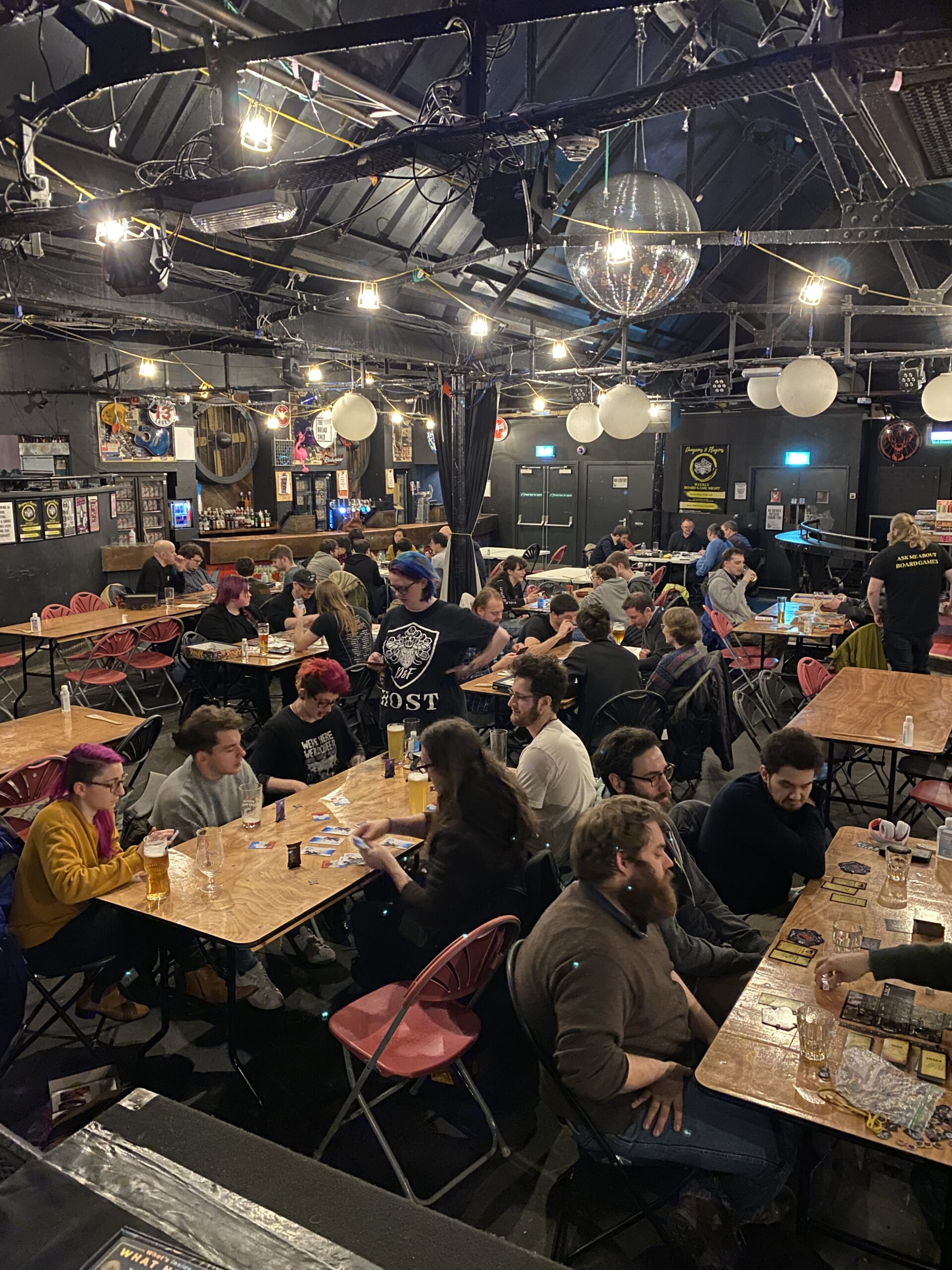 Although he claims not to know ALL the rules for EVERY game – his modesty hides the fact that he’s certainly probably the city’s foremost expert, and loves offering suggestions on what to play next.

When we popped down this week we started things off with something very simple – Klask – an award-winning Swedish game that’s half table football and half air hockey.

After that we were onto a game of Ticket to Ride, before going hell for leather with Camel Up! – a game where you try to suss out and then bet on who will win in a race of five camels around the board. 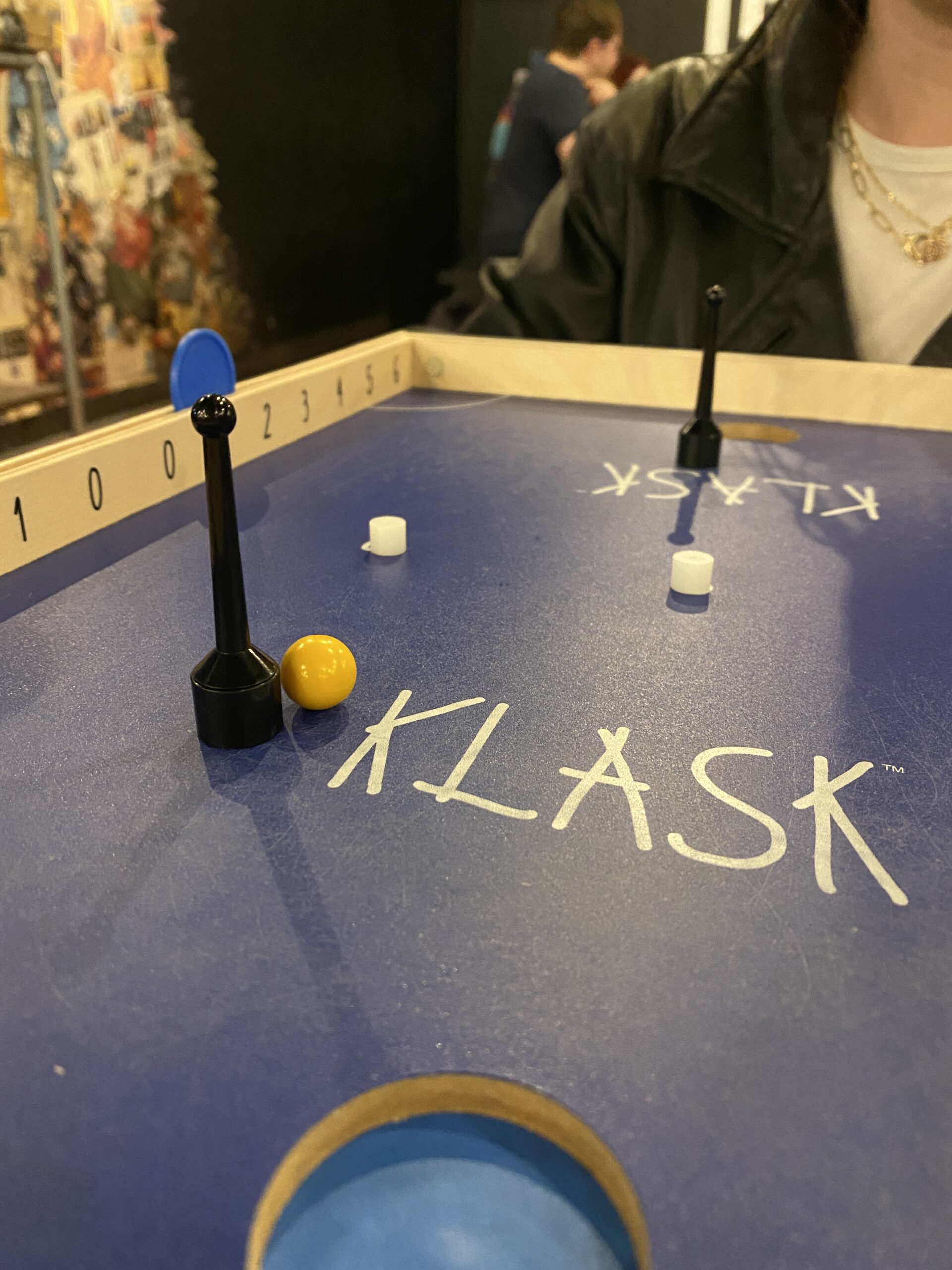 It’s here where I finally get onto the much more complex, and arguably much harder to get into game – Dungeons & Dragons. There were a couple of tables playing D&D on the night that we went and (understandably) it wasn’t possible to play with them.

You see, most of these campaigns have been going on for ages, and it wouldn’t be very good if some idiot from Oldham turned up, knowing absolutely nothing about what’s going on and totally ruining it for everyone.

James does offer the perfect place if you want to learn how to play D&D though, and he can talk you through the basics and getting everything sorted with you and your mates. He was even telling me that many of the new rule books are much simpler than what they used to be – so you won’t spend 10 years working out what in the world to do at the beginning. 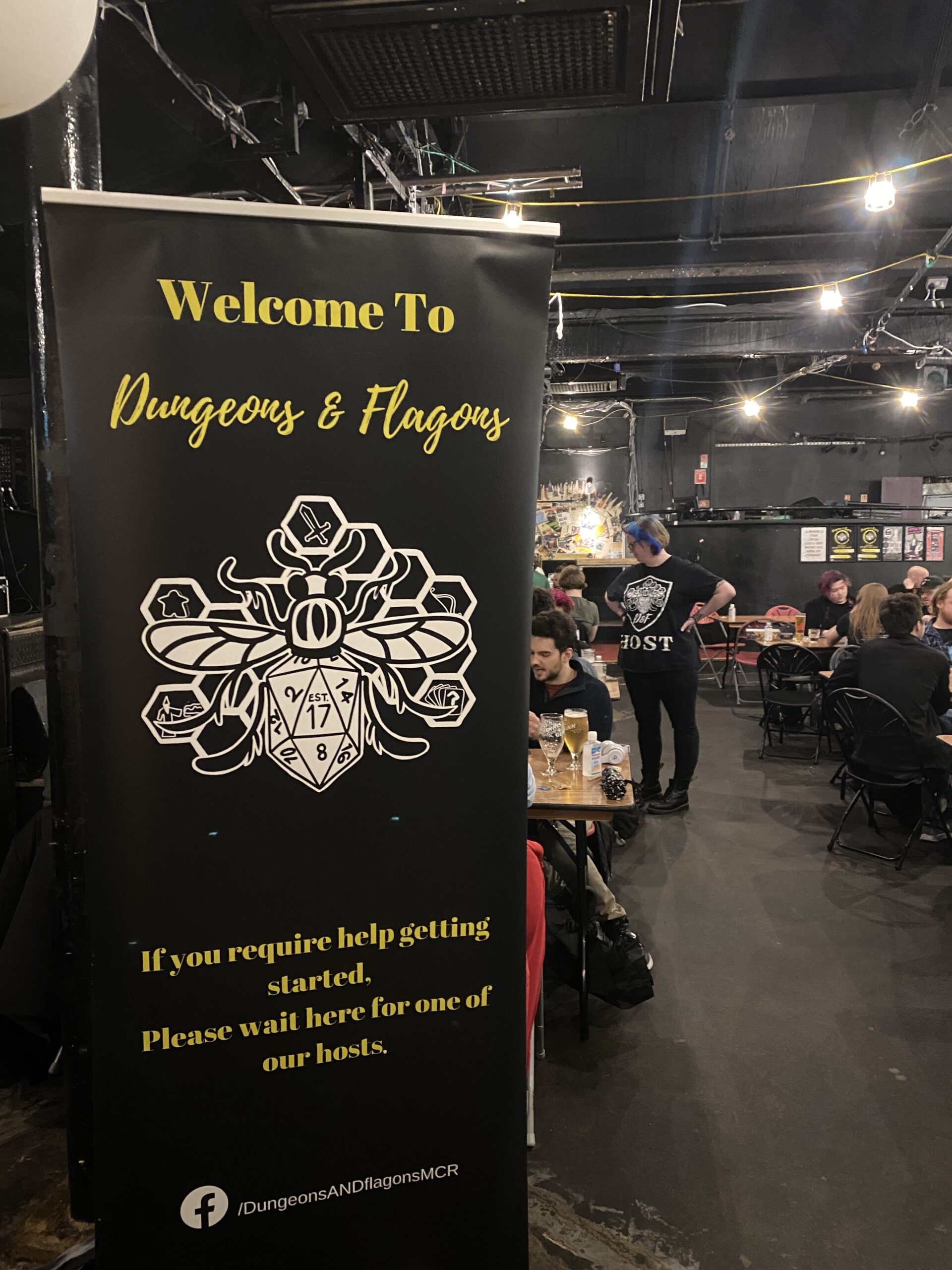 Dungeons & Flagons, despite the name is almost entirely dedicated to board games however, and if Dungeons & Dragons is something that you’d like to get started with and learn, James tells me that Fan Boy 3 on Stevenson Square is the best place in the city to get started, or alternatively, the fantastic Goodtime Games in Didsbury offer beginners D&D courses.

By the end of the evening I’d had 5 ciders, a burger and chips and been absolutely battered by my wife on every single game that we played. No matter though – I’m a good loser and still thoroughly enjoyed myself. Although does anybody know how much a divorce costs nowadays?!

The night was a huge success and very busy. James has managed to tap into, and create the perfect setting for – socialising – a place where anyone can go and have an interesting, enjoyable evening with other like-minded people. 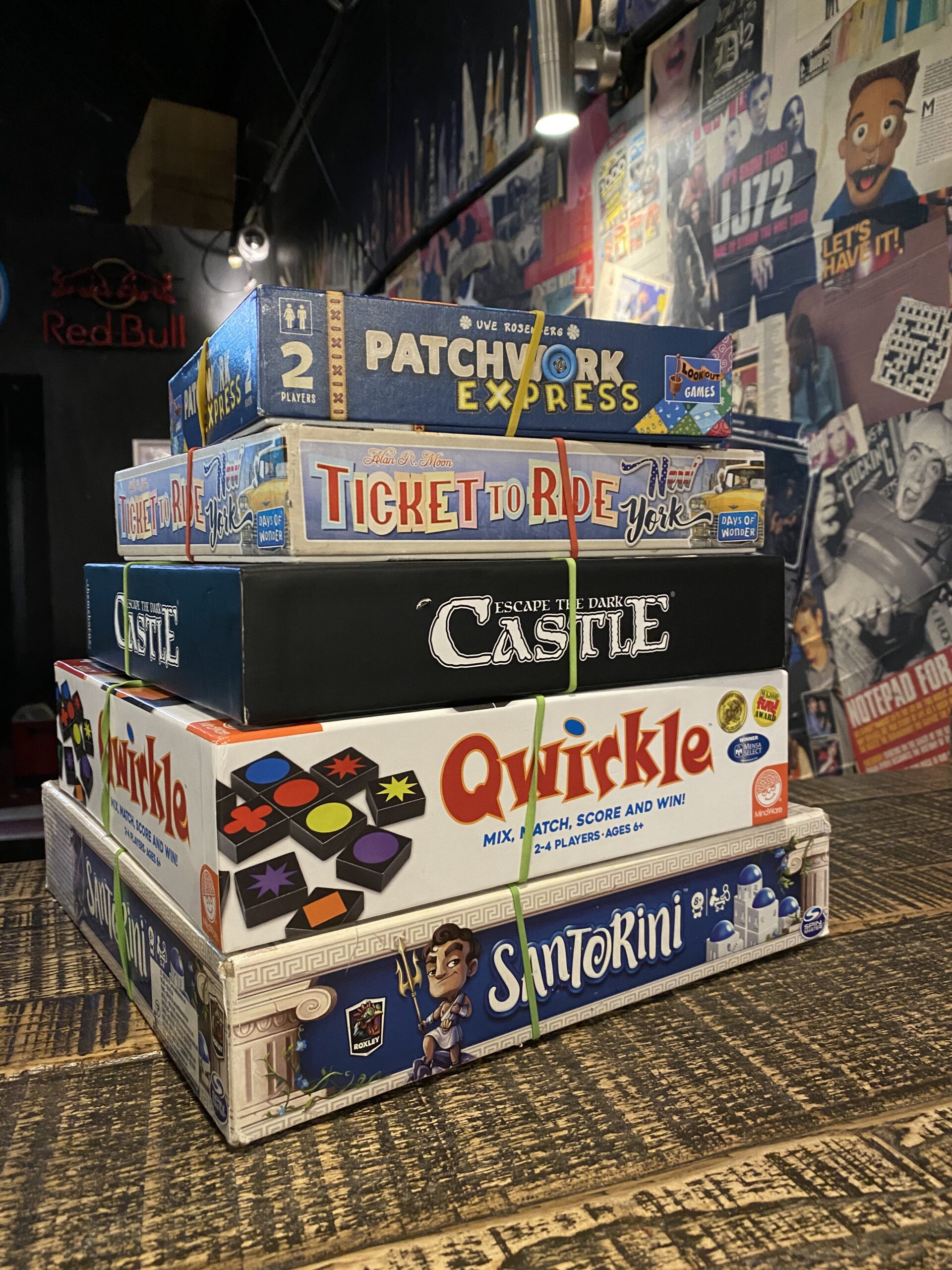 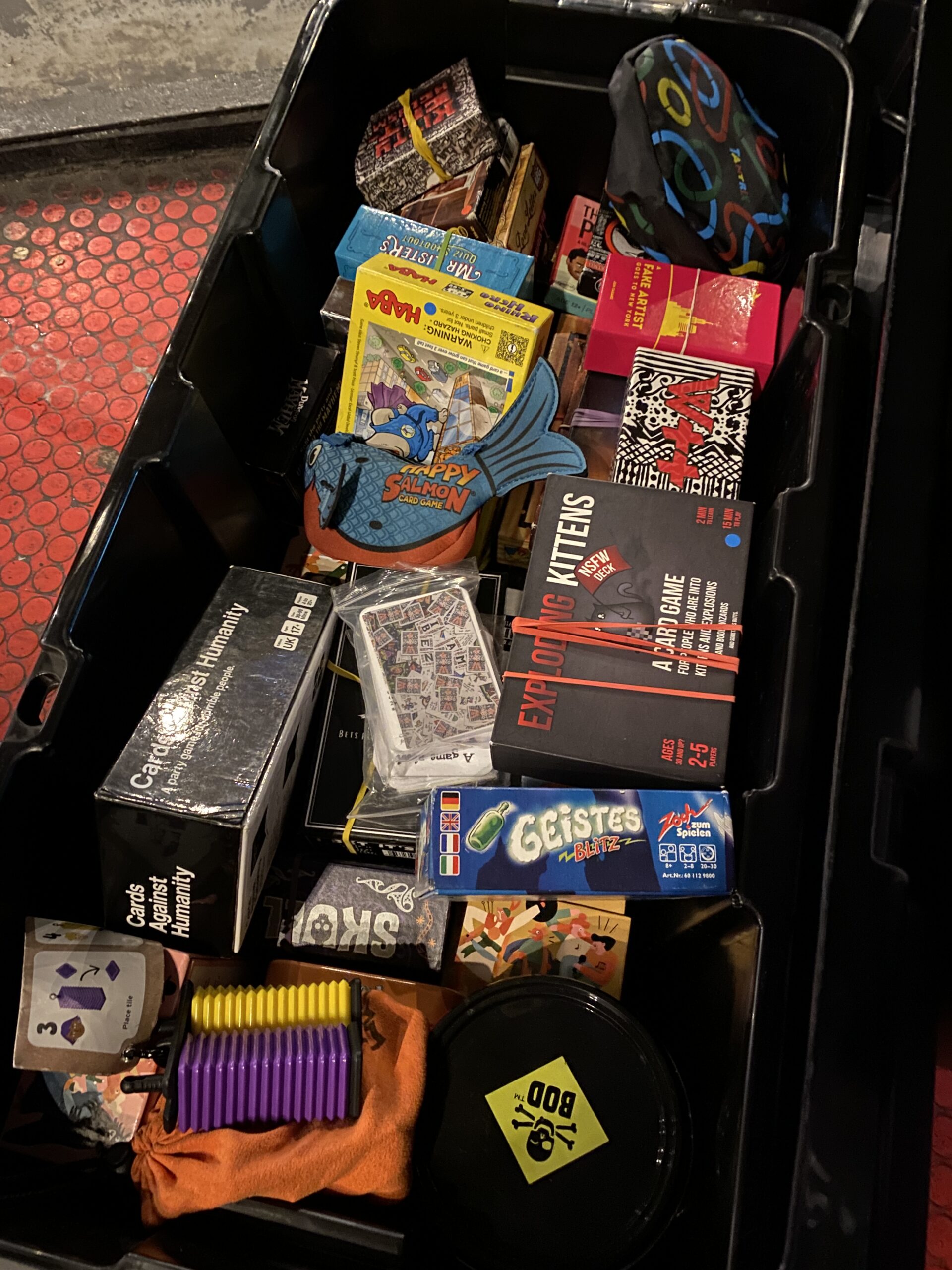 In fact, the popularity of Dungeons & Flagons has reached such a level that James has started to introduce ‘All Dayers’ – a kind of SUPER pop-up at the MMU Union, complete with game playing, a market and competitions throughout the day.

With the next one taking place on Saturday 2nd April, they start at 10am and go on into the evening – often with After Shows including film screenings, party games and karaoke.

If you’re looking for something to do on the evenings other than sit on the sofa and flick through your phone on Instagram – you certainly can’t go wrong with Dungeons & Flagons.

Dungeons & Flagons is currently on 4 times a week at the following venues: